How this amazing piece of road had so far eluded my research of the Vercors, I don’t know. The Col de Rousset was mentioned to me by a touring cyclist I’d been chatting to 10 days prior. The location was slightly out of reach of any of the places I’d be staying at, so I decided to stop off in my motorhome to do the ride. Looking on the web I couldn’t find a suitable parking spot at the bottom of the climb, but there is a great big car park at the top of the col, so I parked my van there. That meant I had to do the descent before the ascent – unusual. 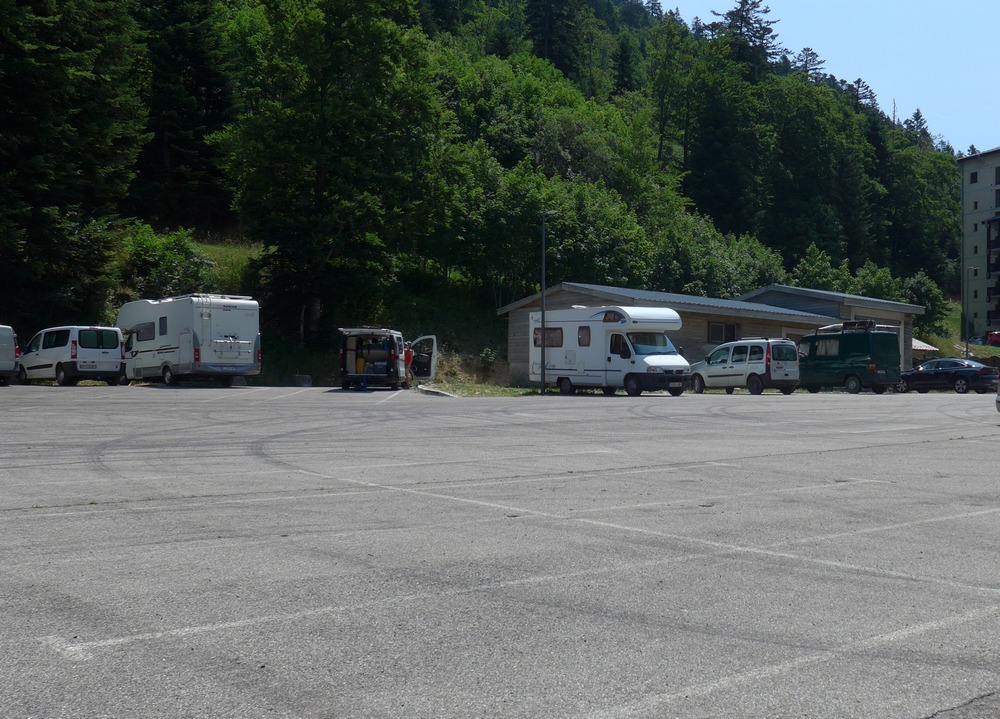 I arrived at the parking area at about 2pm and was on my bike 40 minutes later. It was a very hot day. I was aware that the temperature at the top would be quite a few degrees cooler than at the bottom. In fact it felt perfect as I set off. The first thing was to ride through an 800m tunnel which amplified the noise of traffic to deafening proportions. 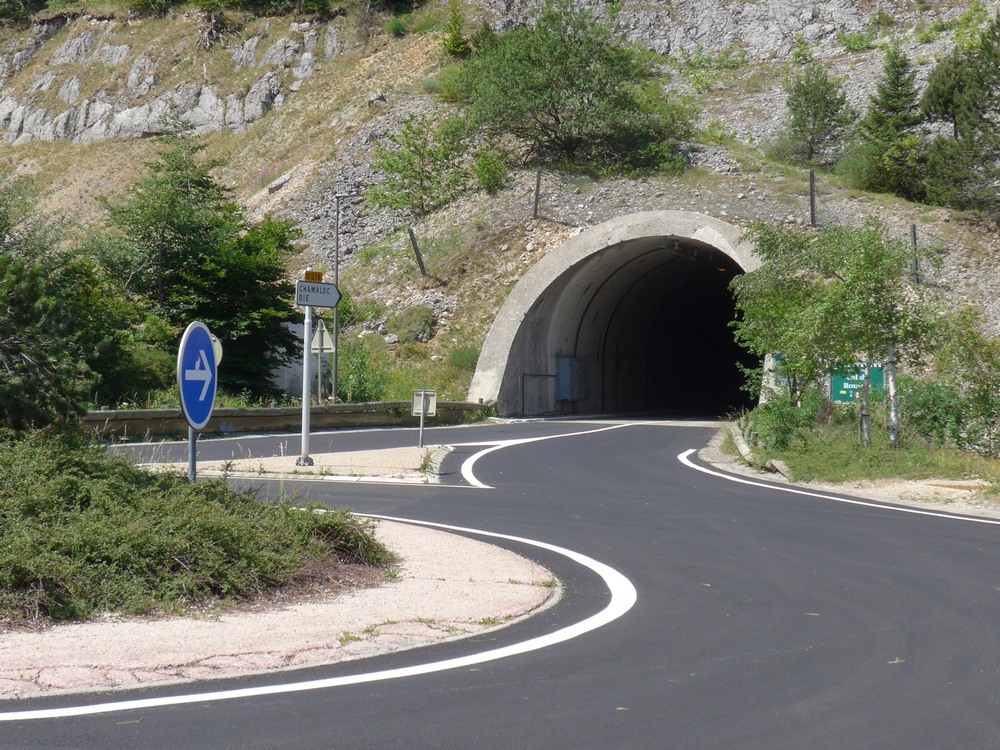 Once out of the tunnel there was immediately a viewing point of the winding road below. A few motorcyclists were gathered there. In fact the whole of this route was teeming with them, never out of earshot, and with extremely loud bikes that veritably polluted the whole of the area with a constant drone, as they enjoyed the twisty road at high speed. If you imagine the sound of a MotoGP event at Brands Hatch, then you will get the idea. 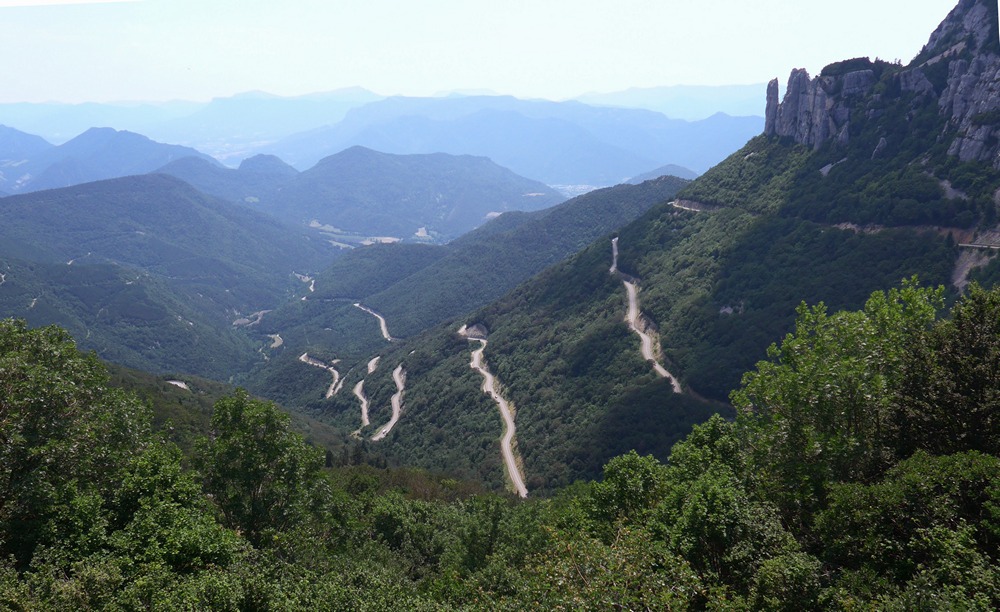 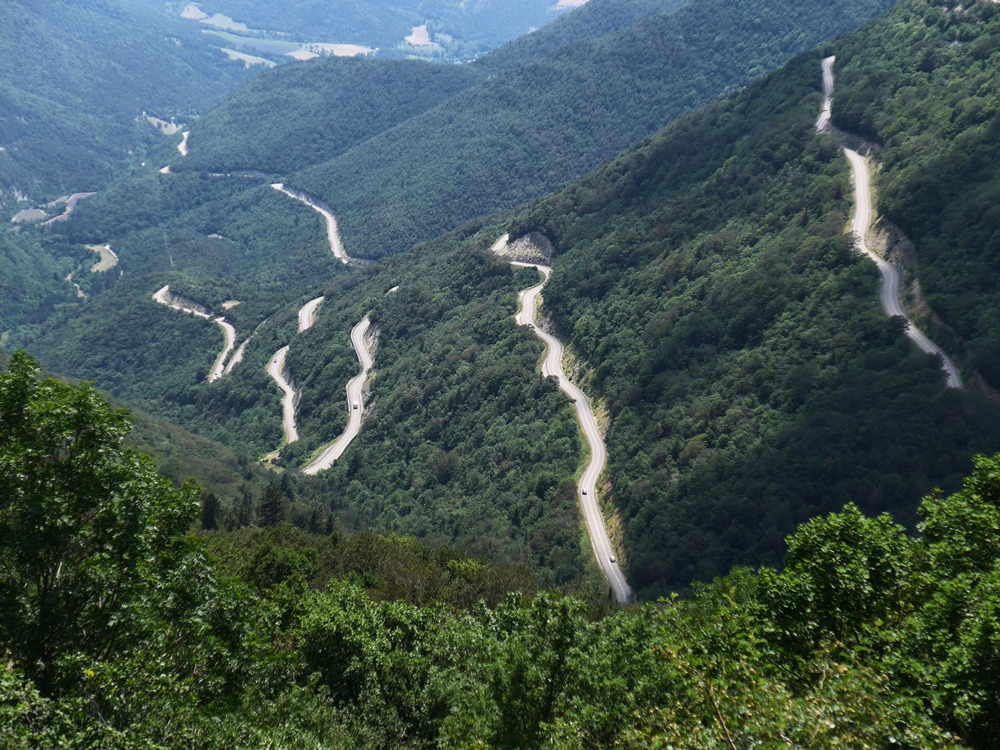 I stopped to get a photo, then continued the descent. At almost every bend there was another photo opportunity. 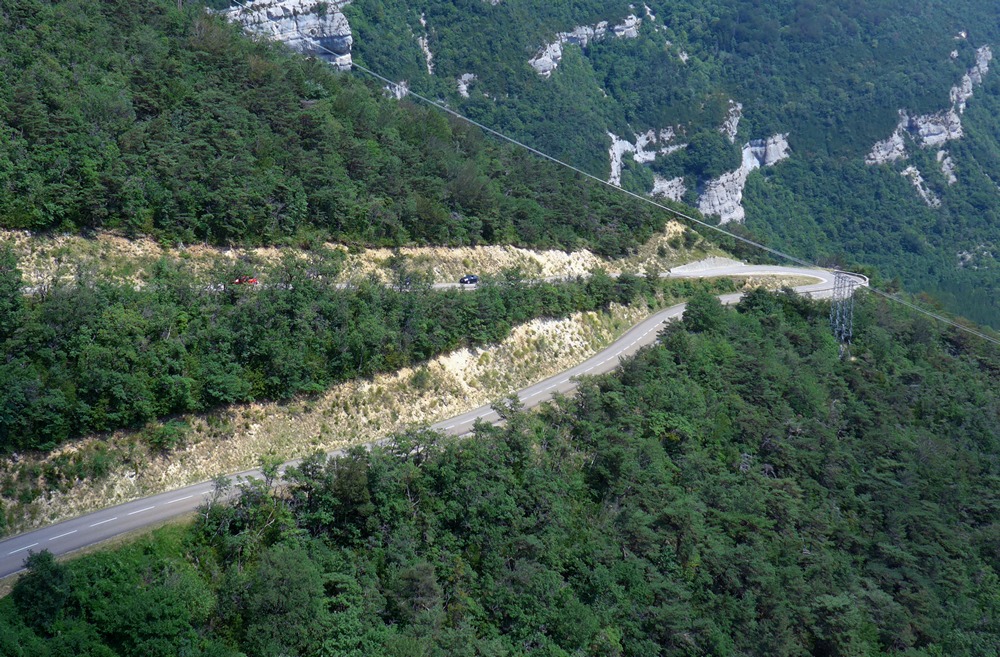 So I stopped frequently on the way down. At one such stop, I had just taken a selfie (gotta be done!) when another cyclist stopped to offer to take my photo for me. I declined that but as we stood and discussed the splendour of the scenery, I did manage to spread some of my Vercors knowledge by pointing out on her map several other places she might enjoy (Col de La Machine, Col de la Bataille, Gorge du Nan, Pont-en-Royans, etc). 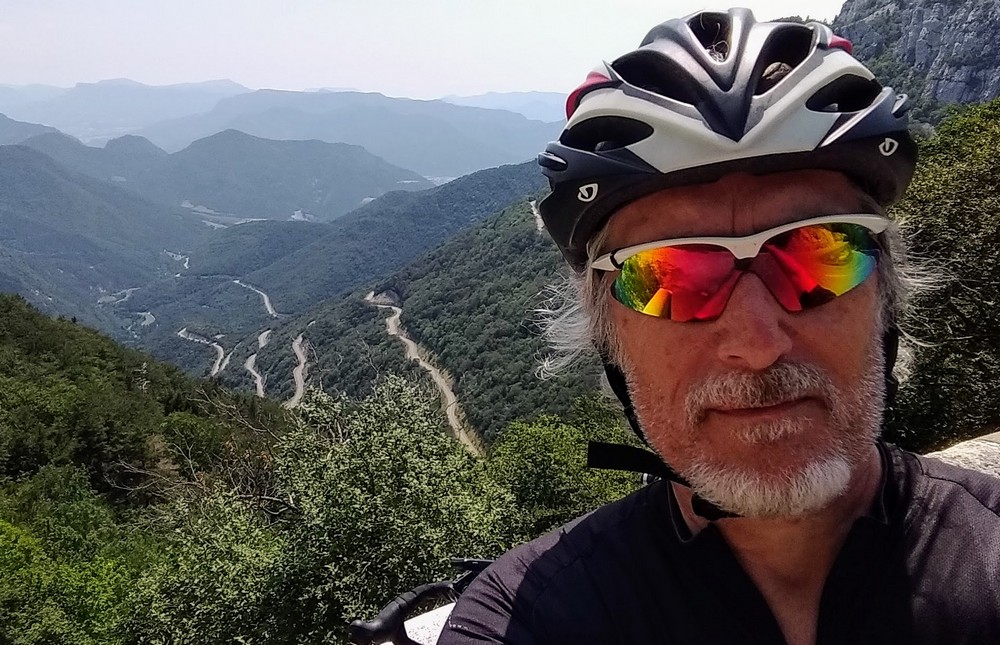 My descent continued. Further down, there were progressively fewer spectacular views, and less stopping.

But the temperature was rising fast. At one point I thought that it was as if I were riding down into the fires of hell. It was akin to the heat from opening an oven door, constantly in my face. The gradient was not excessive so it was quite a leisurely descent with no overly aggressive braking required.

I had no real idea about when to turn round and start the climb back up. When I reached the village of Chamaloc there were 9.2 miles showing on the Garmin. I decided to keep riding to the 10-mile mark and then turn around. That would make it easier on the ascent calculating how far was left to go. So I turned at exactly 10.0 miles, close to a field of lavender, the wonderful scent permeating the thick hot air. The temperature down here was mid-30s. 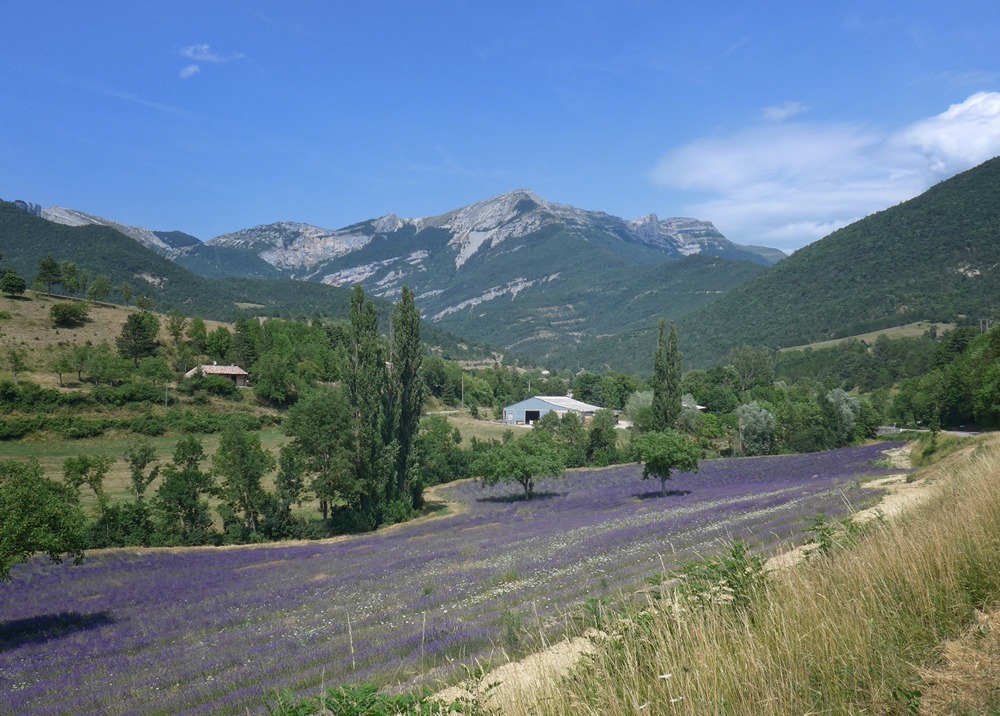 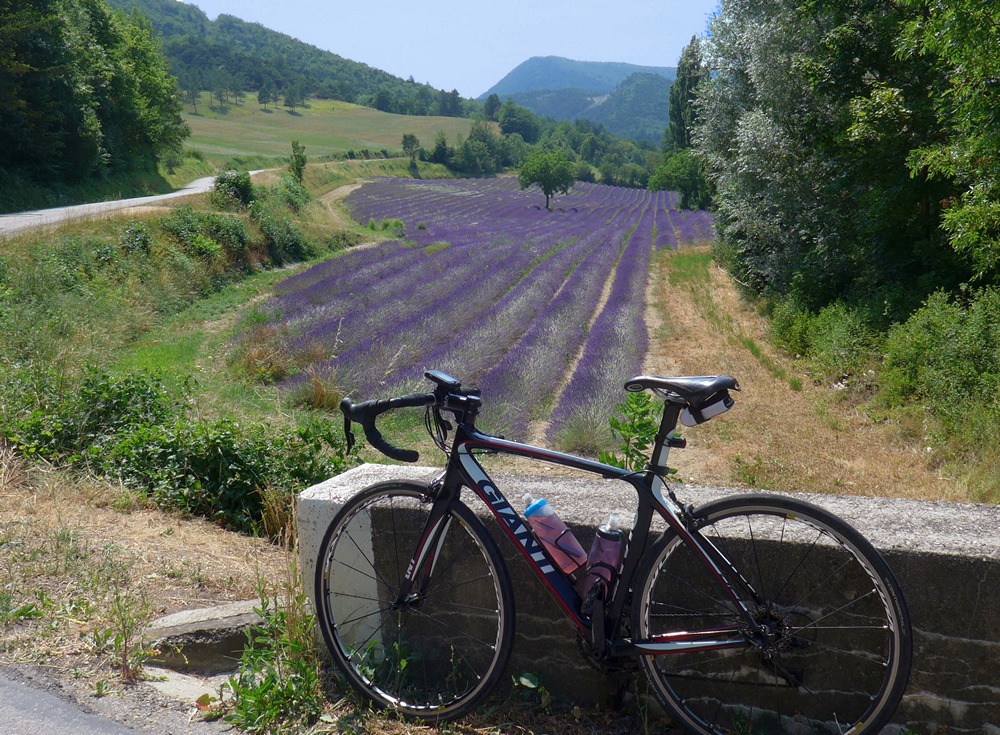 And so the climb to le Col de Rousset began. I stopped in Chamaloc to take a photo of the Col sign and then never stopped after that until the top. 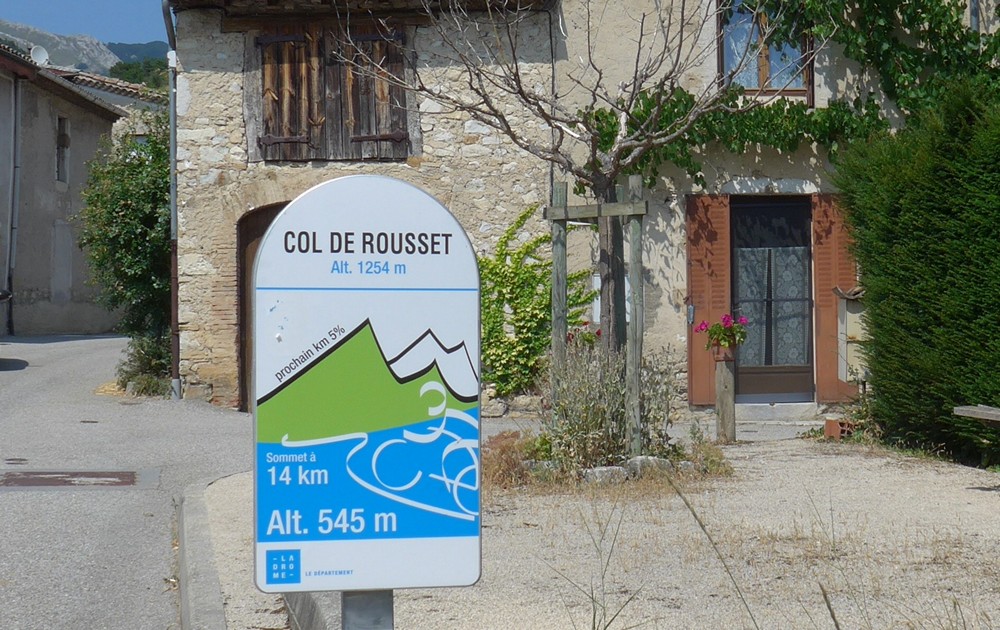 At every 1km there was another col sign telling me how many km to the top, my current altitude, and the gradient of the next section. That last piece of information was of most interest to me. As I approached each marker I focused on the gradient figure. 5% was OK. Sometimes it showed 6% and 7% on occasion. Still the climb was never that tough on the legs. What was very tough was managing the heat. With the sun blazing down on me during the hottest part of the day, it was difficult to keep cool. I sipped my bidon frequently but the contents were too warm to be refreshing. I progressively unzipped my jersey during the ascent, favouring the coolness over the risk of an insect getting in or the certainty of looking less ‘cool’ due to my gut spilling out! There’s cool and there’s ‘cool’!

I periodically shifted my helmet slightly on my head to try to let the air reach different parts. The thought of stopping to cool down was very tempting, but I didn’t want that so I pressed on. Occasionally there was a gentle breeze which offered welcome respite. As the road twisted and turned its way up the mountain I would sometimes find myself in shade. That made a massive difference and I frequently looked up the road hoping to see another shady section ahead. A couple of times I tried the old trick of pouring my bidon over my head, but the liquid was so warm it made virtually no difference. (Later, after the ride, I was to realise that it had been squash I had poured over my head, when I found all my hair stuck together!)

Frequently, bikers would go screaming by, some up, some down. In quieter moments I could hear motorbikes approaching from the lower reaches of the road and I would guess how long they would take to reach me. Another time, a cyclist silently approached from behind and I nearly swerved into him unawares as I meandered slightly about the road, always trying to keep as far away as possible from the almost sheer drop to my right.

The kilometres were ticked-off at every col sign and my Garmin mileage steadily increased towards the magic 20-mile mark, at which point it would all be over and done. Luckily there was a whole stretch of shaded section a couple of miles before the end which offered great relief just when I needed it. Subtly the temperature had been cooling slightly and gradually throughout the climb, as I climbed from 1700 to 4100 ft above sea level. At last I caught sight of the tunnel entrance at the Col de Rousset quite a way above me, a black, precise, man-made semi-circle in the otherwise rugged and irregular scenery. I could tell from the Garmin that I still had more than a mile to go. Unfortunately the road got steeper and was once more into the blazing sun for that last section, but with the end sighted, nothing would stop me.

It had been 90 minutes of slowly turning the pedals, never stopping. This climb is not tough, but the heat really didn’t help. When I got back I realised the Garmin had screwed up again because of the tunnel, so the 20-mile ride was recorded as 19.1, from the other side of the tunnel only.

I then tried to get some rest, with the MotoGP sounds still filling the air. All the windows were open in the van because of the heat. 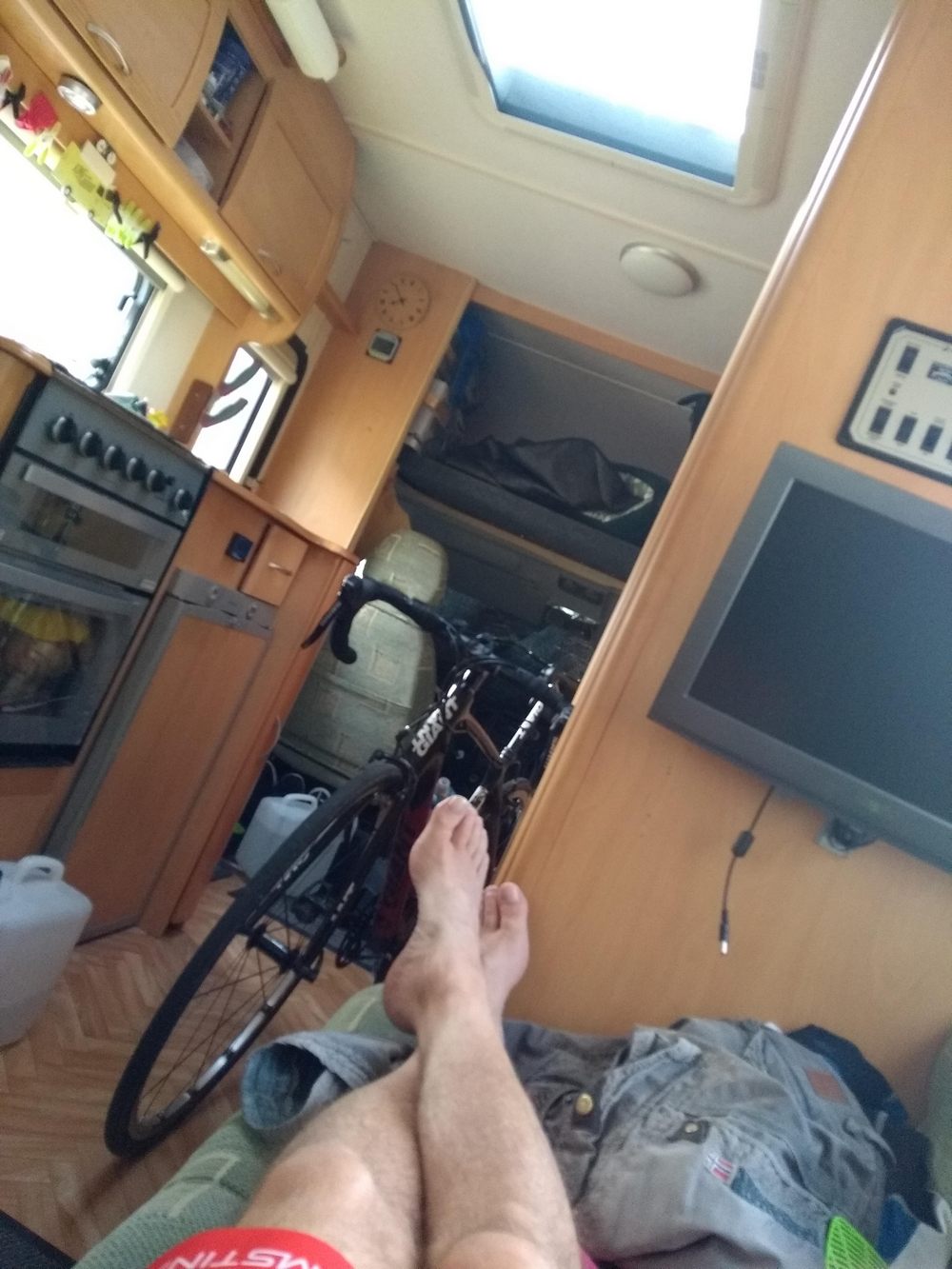 Gradually it got quieter and quieter as the evening progressed. In fact it was extremely peaceful up there overnight.

In a massive and otherwise empty car park, why do people feel the need to park right next to you? 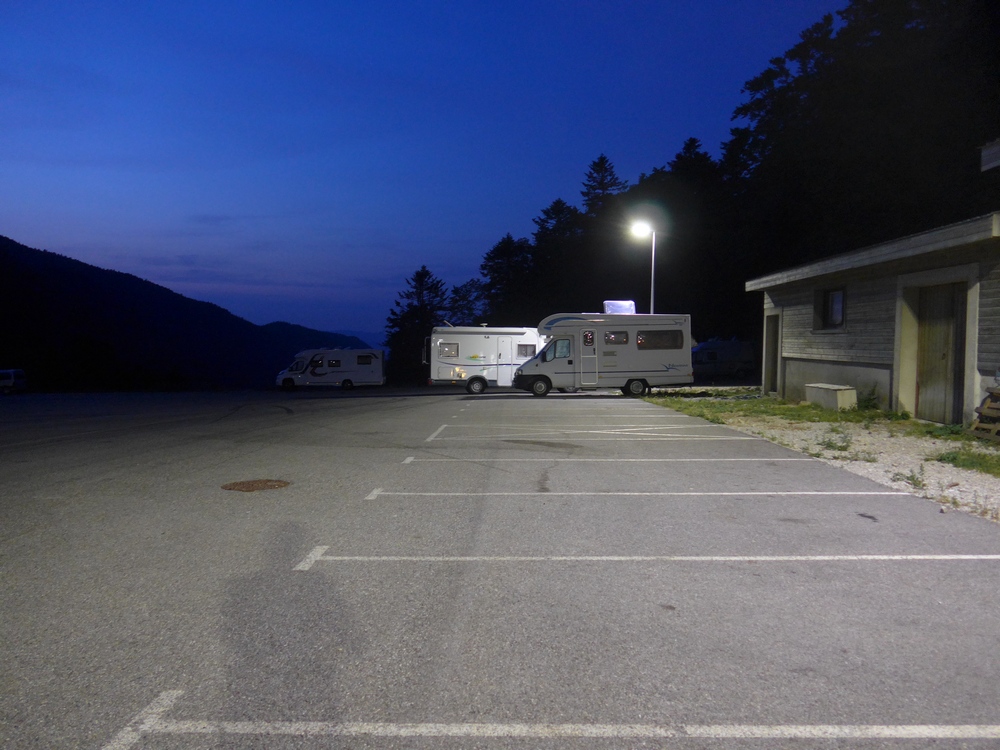 This was my view the following morning, from the car park. And that valley turned out to be an amazing descent, but that’s the subject of another post 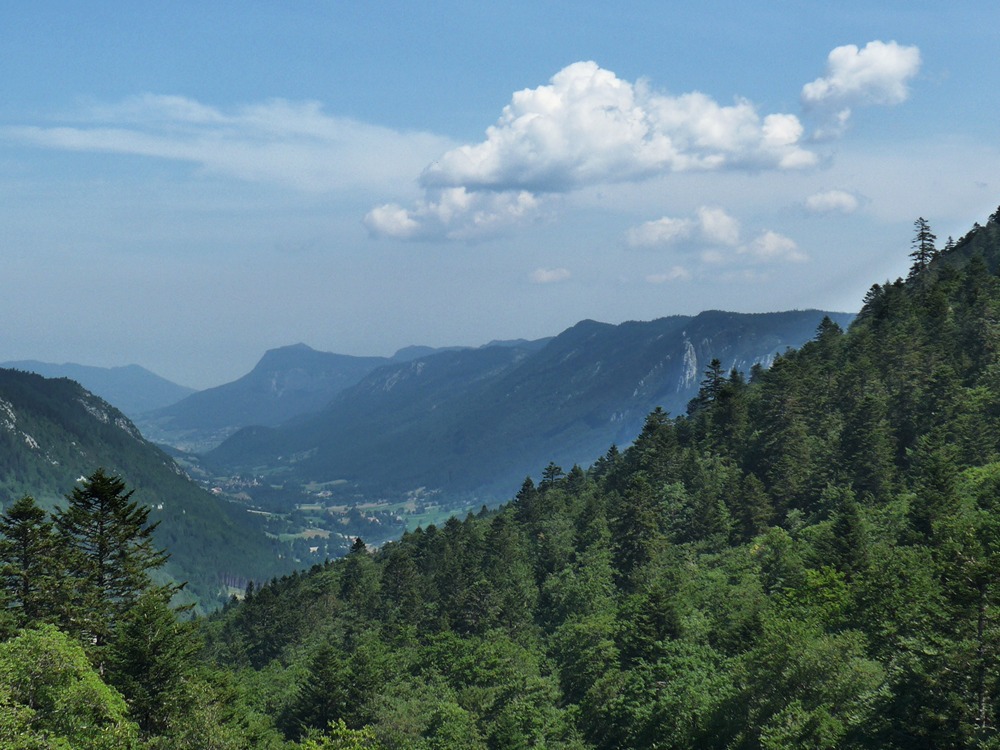