This ride was a return visit to my first ever sportive just over a year ago. That time I had gone for the short route of 35 miles and I managed to get a Gold, with which I was very pleased. This time I had chosen the longest route of 72 miles, although I had made that decision before my knee injury. I figured that I could always do one of the shorter routes on the day if necessary.

The day didn’t start well. The alarm was set for 6AM and I was due to leave my house at 7AM. The alarm did go off but I must have either ‘snoozed’ it or disabled it in my semi-conscious waking state. When I did eventually wake up and look at the time it was 7:20! Argh! I leapt out of bed, loaded up the car and drove at high speed to the start at Burgess Hill, over an hour away. It turned out OK in the end. I still had to queue for the start!

The weather was dry, sunny-ish and very mild at 14°C, in stark contrast to the previous couple of days and totally different to the 2°C of this event last year. As I was arriving in my car I noticed that most of the riders were wearing shorts. Hmmm, I was beginning to think I’d be overdressed, considering the temperature. And I was! I was wearing longs, a base-layer and a quite warm long-sleeved top. Ten miles into the ride I was getting too hot. I didn’t want to risk overheating when it came to climbing the significant hills, the first one of which was coming up at the 20-mile mark, in the shape of Kidd’s Hill, otherwise known as “The Wall”. So I stopped and took my base-layer off and stuffed it in my back pocket.

Kidd’s Hill was pretty much exactly what I was expecting – a long, steady, yet manageable, slog. It’s not that steep but it goes on for almost a mile at an average gradient of about 9% as it climbs over 400 feet through the forest and out onto the heath . The worse thing is that you can see it getting steeper near the top, about 13%. (Note: The Ordnance Survey map marks this hill with a chevron ‘>‘, indicating a gradient steeper than 14%, but that’s wrong. Even if you measure directly from the map it still only comes out at 12%!

With ‘The Wall’ climbed, the next major hill (and I do mean MAJOR) was to be Cob Lane, coming up in another 20 miles. I had already decided to take the shorter course of 55 miles rather than the 72. There was a bit of a ‘hairy’ incident on one of the fast descents. Me and another rider were descending faster than most others and were overtaking a bunch of other cyclists, so we found ourselves near the centre of the road on a sweeping left hand bend when a van was swiftly approaching from the other direction. There was enough room for us to squeeze through on our current line, but the rider in front of me braked – I wasn’t expecting this and I put my brakes on while leaning left and they momentarily locked up and I briefly skidded before gaining traction again – that was a bit scary, for had I lost traction completely I would have been straight under the oncoming vehicle at pretty high speed! Luckily I lived to fight another day.

Eventually it was upon me – Cob Lane. The descent down the narrow approach lane through the forest was very wet and muddy, but luckily the ascent itself was bone-dry. 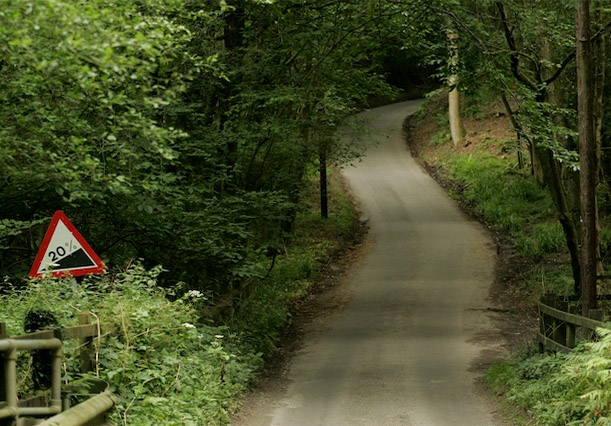 This was the third time I had climbed it. I didn’t think I was going to make it! This really is the toughest hill I’ve ever climbed – tougher than Lockyers, which is supposedly 25%. There is a stretch just around the bend in the picture above where it eases ever so slightly, at least allowing you to sit down for a while, but then it rears up again and you must once again stand on the pedals and ignore your leg muscles which are screaming at you “PLEASE STOP! LET ME WALK!”. It’s at this point you pass the small group of photographers at the side of the road. Normally I would make a jokey comment but I couldn’t spare a single oxygen molecule on them – what’s more, I found that my sense of humour had totally deserted me at that point! Once past the photographers, you have made it – the gradient eases as you approach the main road at the top. I was breathing heavily for the next half mile or so as I got my breath back. There is no time to relax though as 1.5 miles later comes the hill at Ardingly Reservoir. You know that nothing can be as bad as what you have just done but it’s still a tough one and there are yet more photographers to capture your tortured face as you struggle up it. 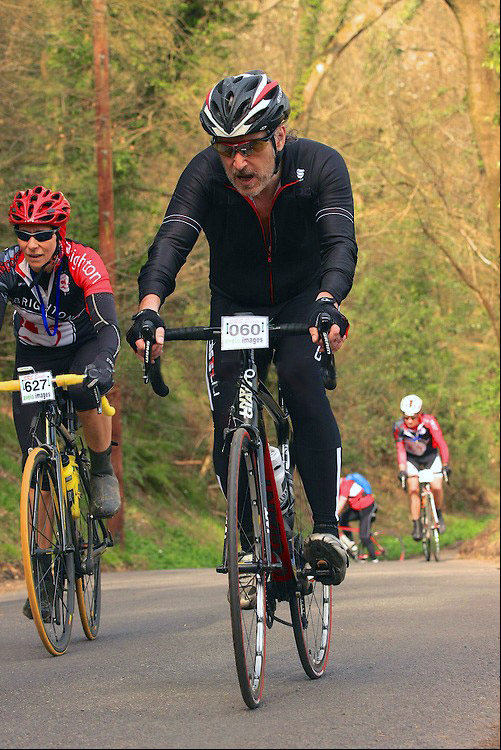 There was only about another 12 miles after that to the end. It wasn’t exactly flat but there were no more significant hills except for one little stinger at Deak’s Lane. No photographers this time, although there was an official-looking bloke standing at the side of the road offering words of encouragement! Eventually the ride was done. I collected my free tuna roll and packet of crisps and went back to my car where I had my protein recovery drink. In fact by this time I was feeling a bit sick, which was not that surprising considering the contents of my stomach:

Although I felt distinctly sluggish compared to last year, I managed to achieve 15 PRs on Strava

Last year I completed the 35-mile course at an average of 13.9 mph and got Gold.