I had been watching a YouTube video in which someone had revisited all the shooting locations for one of my favourite films, Blow-Up (1966), directed by Michelangelo Antonioni. Indeed, the locations in this film were an important part of the attraction for me because nearly every scene looked like it was somewhere I knew, having grown up in S.E. London.

The famous park scene in that film had left a big impact on me since I first saw it in the 1970’s (or early 80’s) and, to this day, whenever I hear wind blowing in the trees I am instantly reminded of that scene. I was surprised to find that the park used for those shots was in Woolwich; it is called Maryon Park.

So when it came to planning the next day’s ride, the westerly wind led me (sort of) in that direction. I don’t normally ride straight into London, but with careful routing I was surprised to find I could get to Woolwich in just over 30 miles. However, the only way this short a route was possible was by using main roads, primarily the A20.

I left at 11 o’clock and once again I had overestimated the weather. It was lovely and sunny out but the air temperature was low. I had a short-sleeved jersey on. Three quarters of a mile of wondering whether I would be warm enough and then “sod it!” – I turned round and went back home for my arm warmers. I’m glad I did – they stayed on for the rest of the day. This Spring has been particularly cold and windy.

The main roads allowed good progress and they were not that busy; I was riding between the morning and afternoon rush-hours. I quite enjoyed the more metropolitan nature of the journey – there’s more variety I think. The A20 was fast and smooth into Swanley, then Sidcup and onto roads with which I’m quite familiar through Eltham and then to Woolwich. In just two hours I arrived at my destination.

I rode into the park and immediately saw the tennis courts that feature in the famous scene at the end of the film. I also saw the steps which led up to the ‘wind-in-the-trees’ location. I decided to explore that later and I found a bench to sit on while I ate my sandwich, looking out towards the courts. In fact there was a couple playing tennis there in the distance and I could hardly hear them, just like in the film! 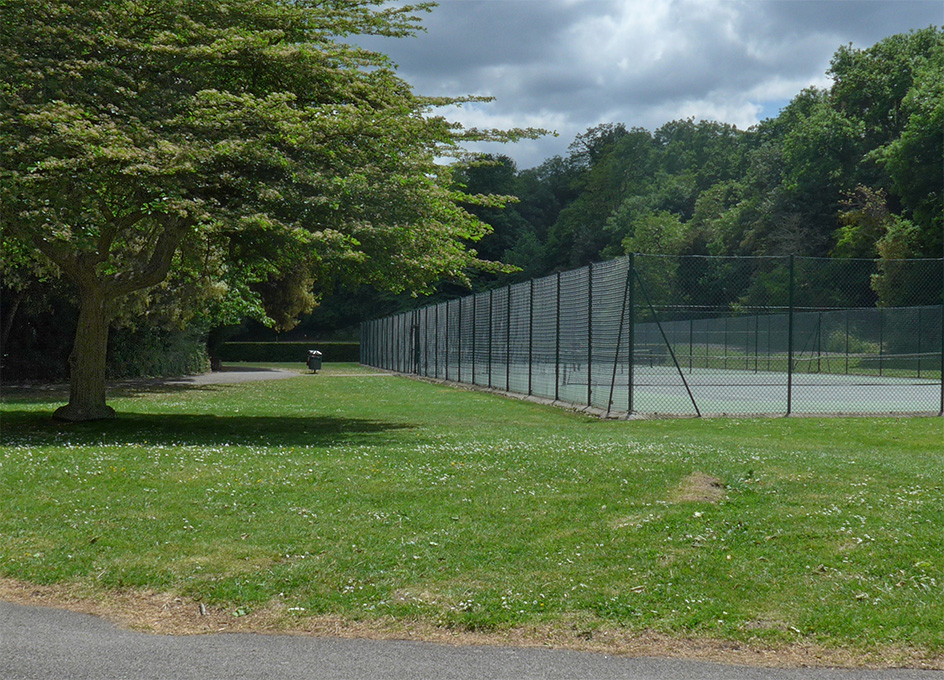 Maryon Park is a lovely park. It is secluded from the surrounding city by tall trees all around the edge. I have always loved parks. They are small oases of tranquillity where time seems to slow down compared to the bustle outside. It was one of my boyhood ambitions to visit all the parks in London; there are probably thousands. Parks are a sign of a civilised society in my view. Back in the days of my youth they were more formal. Fences would designate areas where you were not allowed to go, and ‘parkies’ (park-keepers) would be patrolling to enforce such restrictions. The fences that can be seen in the film are no longer there in Maryon Park, although the park was still well-kept and I was pleasantly surprised to see a ‘parky’ keeping the place tidy, but no longer did he wield the almost police-like authority he once would have had. 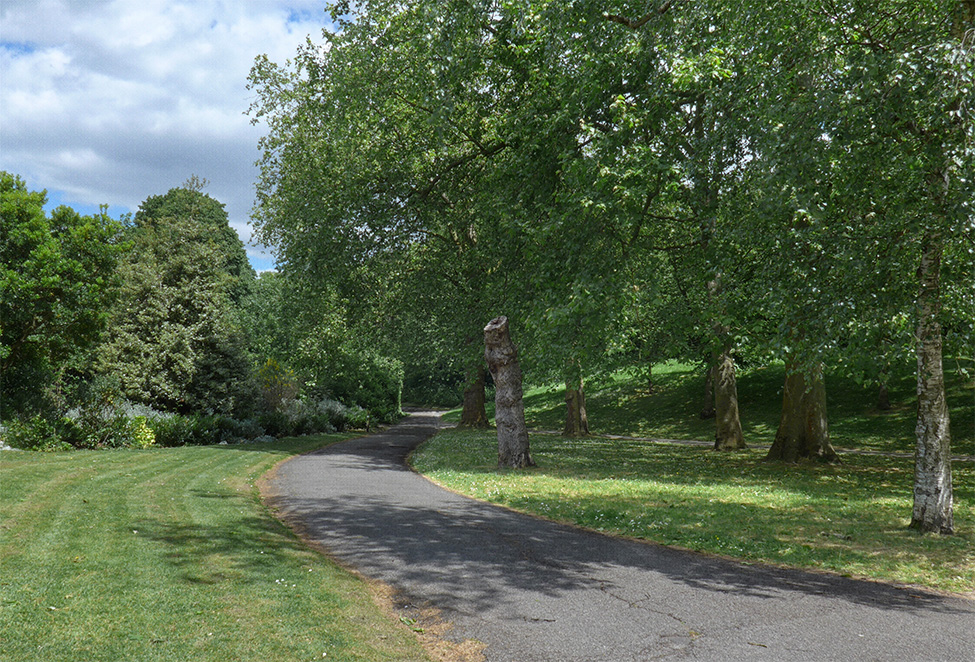 Once I had eaten my sandwich, it was time to explore the upper reaches of the park which were the focus of the film’s main character’s ‘obsession’. The steps were too steep to ride up so I carried my bike. When I reached the top I was surprised how high I was above the tennis courts that I could glimpse through the trees below. 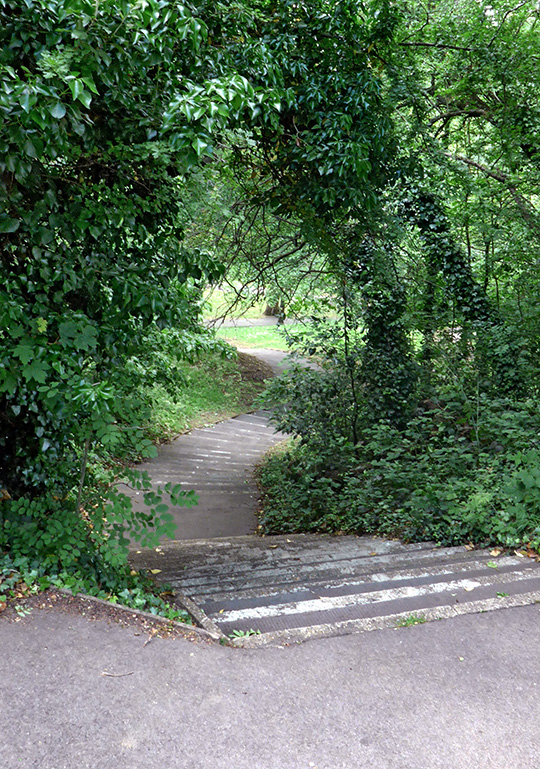 For such a small park it has a very unusual topography, with one part being significantly higher than the rest, and yet each part being quite level. 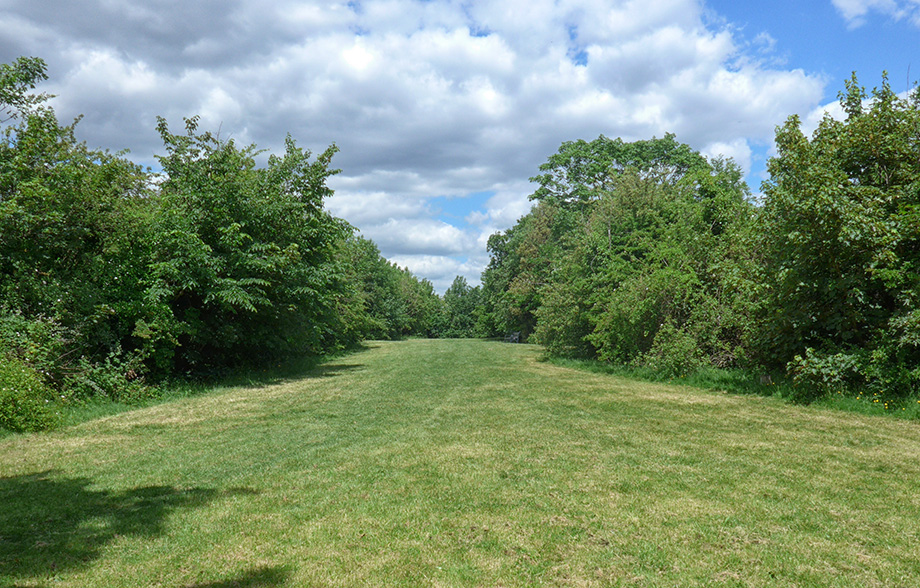 There wasn’t much of a wind blowing while I was there and it wasn’t overcast like in the film. The fences were no longer there, but this upper section still formed a nice secluded spot, and there was still no visual evidence of the city ‘outside’. Should I blow-up my photos in case I have inadvertently captured something in the bushes?

I stayed for a while taking in the ambience of the place and then it was time to leave. I rode down a different ‘flight’ of shallow steps 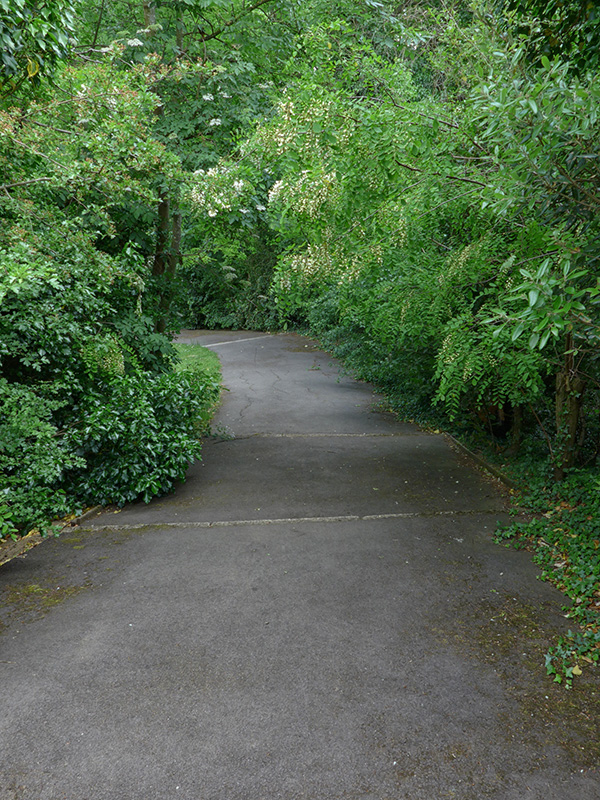 The ride home was straightforward, the westerly wind aiding my progress. I got a PR on the last climb before my house. I might use the A20 again.