I thought I’d like to do a slightly hillier 200k than I did before. So I extended one of my existing routes to cover a wider area. I noticed that the route went quite near Ditchling Beacon. It was too good an opportunity to miss, so I included that climb in the route too.

The weather was sunny but chilly, starting off at 16ºC and maxing out at 18ºC. There was a westerly wind. I wore arm warmers for the whole ride and at no stage did I feel inclined to remove them. At various parts of the ride my feet were cold – in August!

The main feature of this ride, other than the length, was Ditchling Beacon, famous for being part of the annual London to Brighton charity bike ride. It scores a 6/10 in Simon Warren’s book , which puts it on par with York’s Hill, but you can see even from the data in the book that York’s is much steeper. I think he adds points on for how long a hill is, whereas I think the gradient is more important than the length, although they both play a part of course. Anyway, from his description in the book and from reports I found on the internet, it sounded fearsome!

I set off at 10:15, much later than I had planned. It meant I would be back late, but not late enough to need a front light. On this ride I tried a new technique which I’m sure must be against ‘The Rules’. I wanted to carry some ‘real’ food (sandwich, pork pie, banana and other bits) but I didn’t want to stuff it all in my pockets like I normally do. And yet I didn’t want to wear a backpack. So I used one of the ‘goody bags’ from Wiggle that I got on one of their sportives. Basically it is an extremely lightweight drawstring bag with string loops that you can put over each shoulder. It worked brilliantly. It was so light I couldn’t tell it was there, even with food in it. As it emptied out during the ride I was able to eventually fold it up and stick it in my back pocket, thus adhering to The Rules for at least part of the ride!

I took the Giant Defy to ensure I had the lowest gear possible for the ‘fearsome’ Ditchling Beacon. The first part of the ride was into the wind but not too bad. I stopped at 40 miles for some grub. After that I was counting down the miles to ‘The Beacon’. I was really psyching myself up for it. I stopped 3 miles before it and had an mule bar, and got some jelly babies ready to have just before the hill.

Eventually the climb to Ditchling Beacon was upon me. Eight minutes later it was all over, and when I reached the top I thought “Is that it?” I had gone up it in second gear and didn’t even need to get out of my saddle. See here for more details.

The next 3½ miles of descent were quite hairy as there was a strong gusty side wind that threatened alternately to blow me either into the verge or into the traffic! I ducked as low as I could get and gritted my teeth. After the descent came about 4 miles of bike path all the way to Lewes. I don’t normally use bike paths but this one ran alongside the extremely busy A270/A27 and was a welcome relief from having to be concerned about the traffic.

There’s nothing much to report for the rest of the ride. The wind was behind me most of the time so it wasn’t too challenging. I stopped for a final food break at about 88 miles. I found a verge near a field of sheep. I rested my head back for a bit and could quite easily have fallen asleep in the warm sunshine. But I still had 37 miles to go. All throughout this ride, there was much ‘tractor activity’, whether it be machinery being moved between fields, or tractors carting hay down the country lanes. Several times I was held up by them. It all seemed connected with what I guess is the last haying time of the year. It usually means the farmers are taking advantage of a dry spell. I hope it doesn’t mean that the weather will get worse over the next week or so. This haying activity, added to the chilly feel to the day, really gave the feeling of a more Autumnal ride.

When I got home I felt pretty good. I think my body is getting used to these long rides. My last four rides add up to 462 miles! 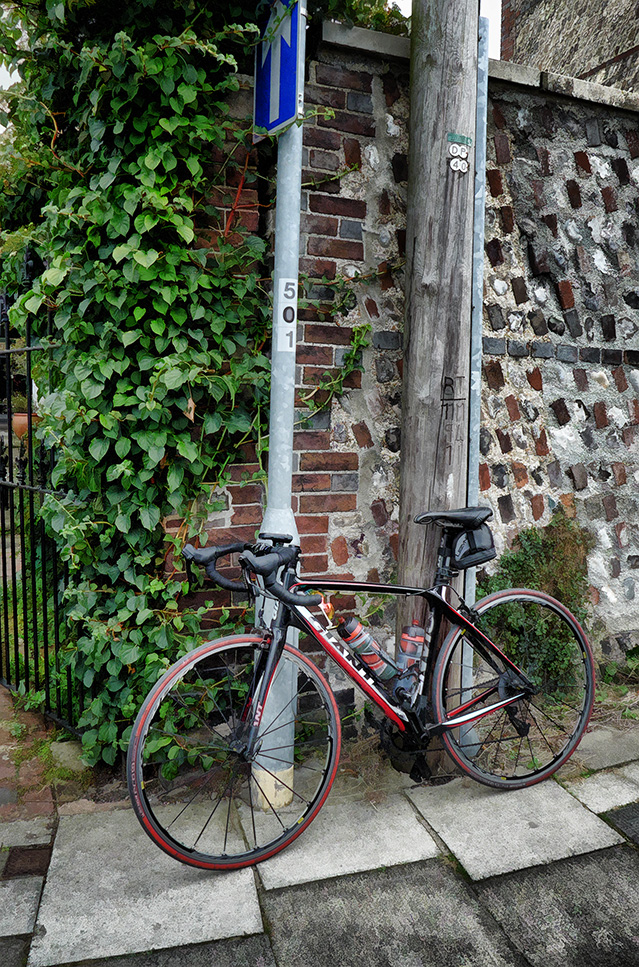