After my first 100-mile ride of 12 days ago, I needed a new challenge. I wanted to go further, but didn’t want it to be as hilly as that one. The next logical distance target was 200 km. So I planned the flattest route I could, using the Vale of Kent and Romney Marsh to good effect! The route headed down to the coast at Hythe, then along the seafront as far as Dungeness, and then back through Appledore, Woodchurch, Frittenden, etc. That lot didn’t quite add up to 125 miles so, instead of heading straight for home, the route ‘wasted’ some more miles by following a convoluted path around Hadlow.

Ian, a friend of mine from the club, spotted my route on the web and volunteered to join in the fun, so we set a date and watched to see what the weather would bring. I was aware that the 10-mile stretch of road along the seafront can be soul-destroying if you have to ride into a strong headwind, so I was ready to reverse the whole route depending on wind direction.

When the day arrived, the weather was ideal. An easterly wind ensured that the seaside section should be relatively easy with a tail wind. It was a beautiful sunny day. We set off at just after 8 AM, at which time the temp was about 15ºC. The intention was that we would be going for distance, not speed.

Somehow, that plan went out the window to some extent as we averaged over 16 mph into the wind for the 36 miles to the coast at Hythe! About 4 miles before we reached Hythe there was an amazing view to our right as we looked out over the flat expanse of Romney Marsh as it stretched out towards the English Channel. I didn’t get a photo because I thought there would be a better opportunity as we approached ‘the edge’ of the higher ground we were on, before we plunged down into Hythe. Unfortunately any potential photogenic vistas were obscured by roadside tree cover. 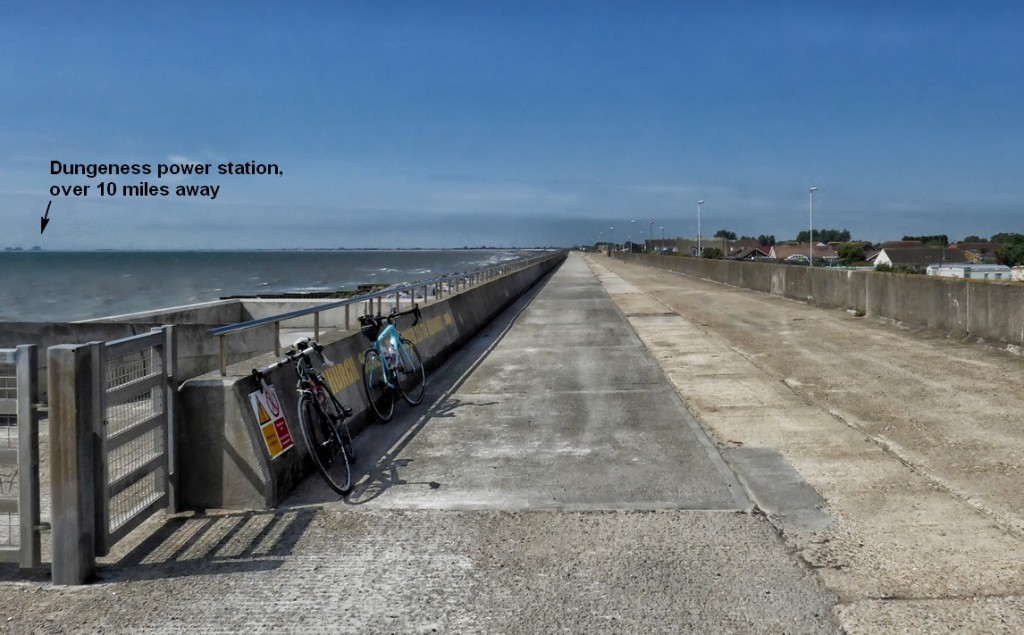 About two and a half miles to the west of Hythe the road starts to run along the shoreline, but I chose to ride on the path by the sea wall because you can’t see the sea from the road. The path was an amazingly smooth, wide and empty strip of concrete. We had our first short break there and took in the fresh sea air. All the flags were a beautiful sight, because they showed that the wind was blowing right along the shoreline in the direction we were headed! 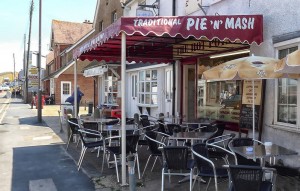 Two and a half miles further along we turned off the sea wall path into Dymchurch and stopped at a Pie’n’Mash shop, after discovering that the nice little café I had discovered a couple of weeks ago was closed today.

After a toasted cheese and onion sandwich and a cup of coffee, we were on our way again. With that tail wind to help us we averaged nearly 20 mph over the next 20 miles via Camber to Rye, without having to make any effort.

We decided that we should probably try and have another stop about 2/3rds of the way, maybe at the 80-mile mark. That would be coming up in another 20 miles or so. Meanwhile we enjoyed the beautiful sunny weather and country lanes as we made our way through Brenzett and Appledore 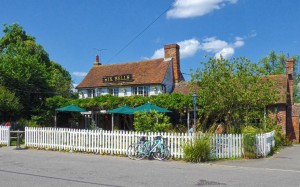 As we rode into the village of Woodchurch, we were greeted with a sight that was too hard to resist, namely the Six Bells pub. We hadn’t quite reached the 80-mile point, but it was too good an opportunity to miss. The pub, with its sunny beer garden out front, looked most inviting, and as we walked into the bar area the urge to order a large cold beer was almost overwhelming. But with 50 miles of our journey left, we settled for coffee. We also topped our bidons up and I drank almost a whole one whilst sitting there outside. So we topped them up again before setting off on the last leg of our journey. The temperature by now was about 24ºC.

As we set off from the pub I felt distinctly sluggish, as if the 77 miles so far covered were taking their toll. Luckily this feeling didn’t last long and I was soon back in the groove. Less than 15 miles after the pub, we were in Staplehurst, which is very close to my home, about 9 miles. So it was weird, and psychologically demotivating, to think that we still had 33 miles to go! So for all those 33 miles we were feeling that we’re ‘almost there’. When I next design a long ride I’ll make sure I don’t add any extra miles on around the area I live in!

Luckily, and I think it was down to regular hydration and food, I felt fine right to the end. In fact I seemed to be getting faster over the last 20 miles or so. When I looked at the data later on Strava I saw that I had achieved a Personal Best coming up the last hill before the end (). I was completely amazed at that feat!

It was an excellent day out; good company, beautiful weather and lovely scenery. What will my next target be? 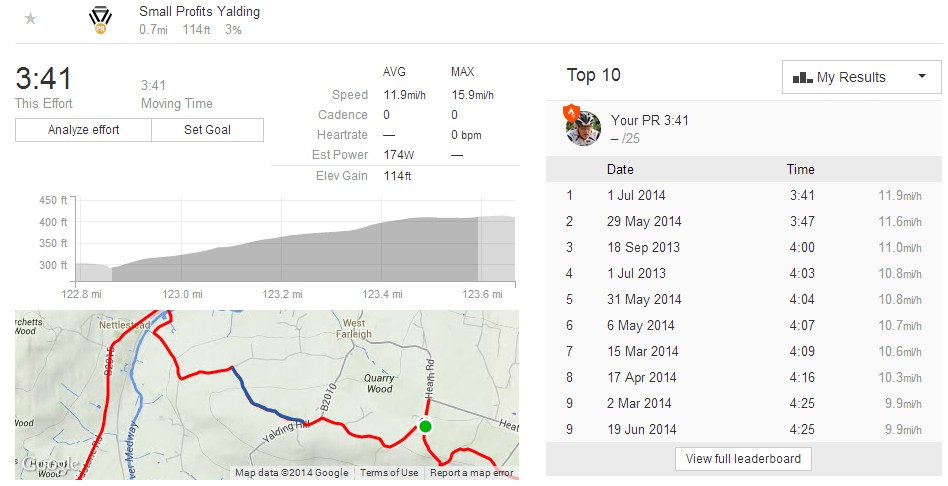