Will I ever learn? Once again I didn’t double-check to see if the route I had created on the web was actually all on roads! If Mr. Colnago knew where I rode his beautiful machine today, he’d probably cry. It started out as what I thought would be a fairly straightforward ride, the purpose of which was to get two more notches on my belt by virtue of climbing Vigo Hill and Birling Hill. But, as you can no doubt tell from the various squiggles and loops on the map, it didn’t exactly go according to plan.

It was a beautiful sunny, breezy day; but a bit nippy : 9°C when I set off, warming to 11°C by the time I got back. My kit was bang-on for the conditions – long sleeved top, long bottoms, base-layer and gloves (first time since last Winter) – I felt just right the whole ride. The roads were pretty dry so I took the Colnago.

It started off OK and I felt good. I had decided to use a different route through West Malling, but when I came to ride up a particular lane, it was blocked by a gate as if it was private property. I couldn’t see any way round so I rode back into the village and round my usual way. Already I had added an extra mile (see route above).

Just over two miles before the first big climb of the day (Vigo) I had an energy gel. Up to that point I had eaten nothing all day; it’s a new idea I’ve been experimenting with. A couple of hundred metres further on the road was closed due to bridge repairs, but luckily the workers let me walk through, saving me another huge detour. Two miles later I was climbing the easy first bit of Vigo Hill. I kept remembering something that somebody had said about it getting very steep as the road turned the corner. Well there were several corners and I kept thinking “Is this the steep bit?” But when I finally saw it I was in no doubt! 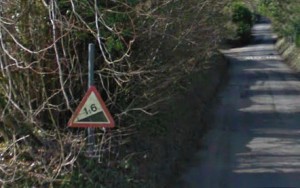 I passed an old-fashioned sign saying “1:6”. I mentally converted that to roughly 17%. As the road ramped up ahead of me I thought there’s no way that is only 17%! [Looking at the data later it looks like there’s a section of 20%, so my suspicions were right.] I found it really tough and by the time I had reached the bridge across the road I was experiencing a new sensation, namely that of feeling physically sick with the effort. I pushed on ahead and eventually made it to the top without stopping. I can only attribute the sick feeling to the fact that I had only had one energy gel on an empty stomach. I wondered about cutting the rest of the ride short without attempting Birling Hill at all. But then I thought that I’d probably be OK if I got something decent in my stomach, so I stopped a couple of miles later to have a slice of fruit loaf and a fig roll, while admiring the view from the Pilgrim’s Way.

I soon set off again and just the other side of Trottiscliffe (pronounced ‘Trozley’!), my Garmin indicated that I should turn right, down a muddy path. I didn’t want to ride down there so I zoomed-out the map on the Garmin to see a way around; there was another route further up so I carried on towards that. When I got to the other route, it too was off-road. I decided to go up there anyway. The road started off as a rough stony path but quickly degenerated into a muddy gulley, along which I was managing to keep going slowly, until muddy exposed tree roots crossed the path. This was mountain bike territory. I got off and walked past all the roots.

I stopped to consider my options. Just then, a couple of walkers appeared and I asked them if they knew if there was a ‘proper’ road in the direction I was heading. They started discussing many options between themselves and ended up almost bickering about it! I hastily thanked them and ploughed-on ahead, ‘plough’ being the operative word as I found myself riding along the edge of a muddy field. That soon led to a bridle path and a whole new level of muddiness. My wheels were buried in about 4 inches of the stuff and I had virtually no traction. It was like riding on a tightrope – I dare not make any sudden moves else I would lose balance. Unfortunately I pushed my luck too far and as I tried to negotiate a bend in the path, the wheels just slid out from under me and I found myself and the bike on our side in the mud. I came down on my right shoulder and was aware of a pain on my inner thigh – I guess the saddle must have dug-in somehow. It happened so quickly there was no time to brace for impact. Miraculously, without my having consciously done anything, both my feet had become unclipped from the pedals. Anyway, enough about me – how was the bike? I hear you cry! As far as I can tell it only suffered a muddy rear dérailleur and a slightly mis-aligned brake lever.

I got straight back on, now covered in mud. A family out walking were just up the path. They certainly would have heard my cry of “no!” or whatever I said when I hit the deck but they hadn’t made a single move to help. They probably thought “why is this idiot using a road bike in these conditions?” As I approached them I asked again “where’s the nearest ‘proper’ road”? They were very helpful and, like the other two, negotiated the best route between themselves, this time without bickering. I thanked them and moved on. The cleat on my shoe was so full of mud that I couldn’t clip it in properly, so I stopped to sort that out. Shortly after that I came across someone riding a horse that had “never seen a bike before” (the horse, not the rider!), so I duly dismounted and waited to one side to let the inexperienced animal through without freaking it out. Again I asked about the nearest road and was told again (by the owner, not the horse!) to keep going. Eventually I found my way back to civilisation, with ‘proper’ roads. Basically I had made a loop back to where I had first gone off-road (see the square shape in the map above).

I had totally given up on my Garmin by now and decided to find my own way to Birling Hill. With all that muddy stuff behind me I was looking forward to the more straightforward task of climbing the hill. I’m glad I hadn’t given up back when I had felt sick earlier because I now had renewed energy and I found the ascent of Birling Hill reasonably easy, going up it in second gear. At the top I made my way along the ridge, back to the top of Vigo Hill, so that I could experience the descent of that beast.

The ride home included finding my own way to West Malling, staying mainly on the A20, and some more very muddy off-roading in the woods around the back of Barming, but at least that route was of my own planning. I felt pretty comfortable in the latter stages of the ride and managed a personal best (by a margin of almost 30 seconds!) on one of the final climbs, even with the extra weight of all that mud on my bike!

2 Replies to “Vigo and Birling or “The Day After The Storm!””