Hopefully I’ll keep this post a bit shorter. I planned a ride that was a mixture of other routes with some new bits thrown in. I planned to visit the café at Horsham where I stopped last week, but use my old route to the north of Crawley, so no busy dual carriageways this time. I chose a new way over the South Downs at Steyning, then along the coast as before, but turning North at Cuckmere to avoid the potentially busy main road towards Beachy Head. This ride would be different because of the unknown hill at Steyning and the quite lumpy last 45 miles.

After getting my stuff ready and applying sun block, I set off at 8:20 AM, 20 minutes late. The weather was much more forgiving today – mid to high 20’s with a SW’erly breeze.
My Garmin was still playing-up with the “Insufficient memory” message but I assumed everything would be OK. The temperature when I left was 16.5°C. Again, not as warm as last time but no call for arm-warmers as I knew it would warm up later. Riding towards Tonbridge I unexpectedly met a fellow club cyclist I hadn’t seen for a while and spent the next 4 or 5 miles chatting with her before our paths diverged.

The ride to Horsham was otherwise uneventful except to note that the westerly component of the wind was in my face the whole time. This time I did take a short break about 6 miles before reaching Horsham and had a banana.

At the café at Horsham I had fried egg on toast and a coffee. Ten miles later I was crossing the River Adur near Partridge Green. 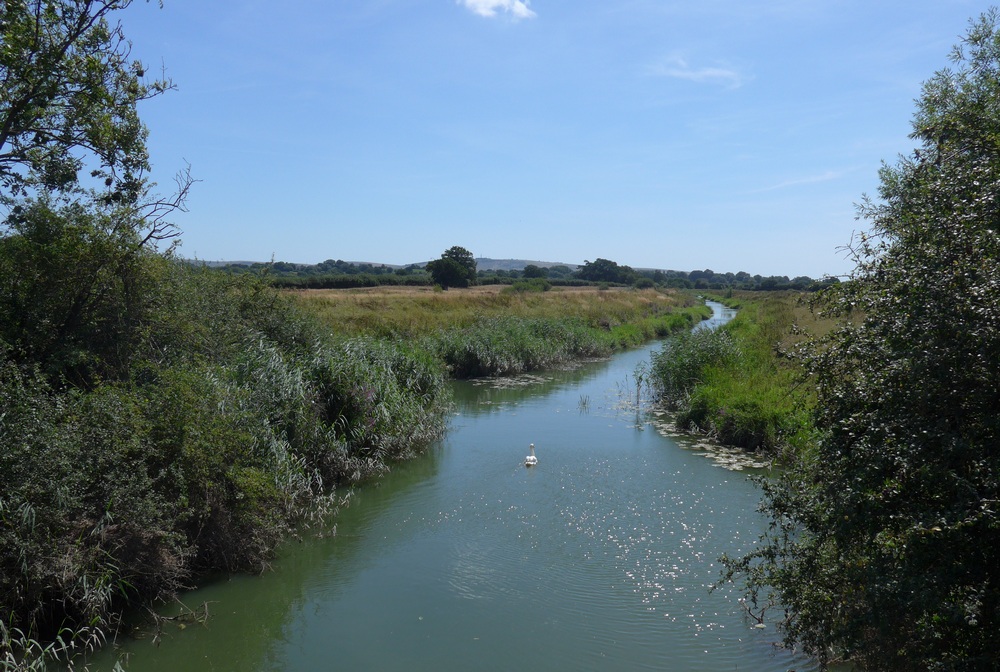 Heading South, now I had the southerly component of the wind in my face. I was hoping it wouldn’t make the approaching climb too tricky. Aware that Steyning was only a few miles away, I took an energy gel in preparation. Through the lovely village of Steyning, I reached the climb. 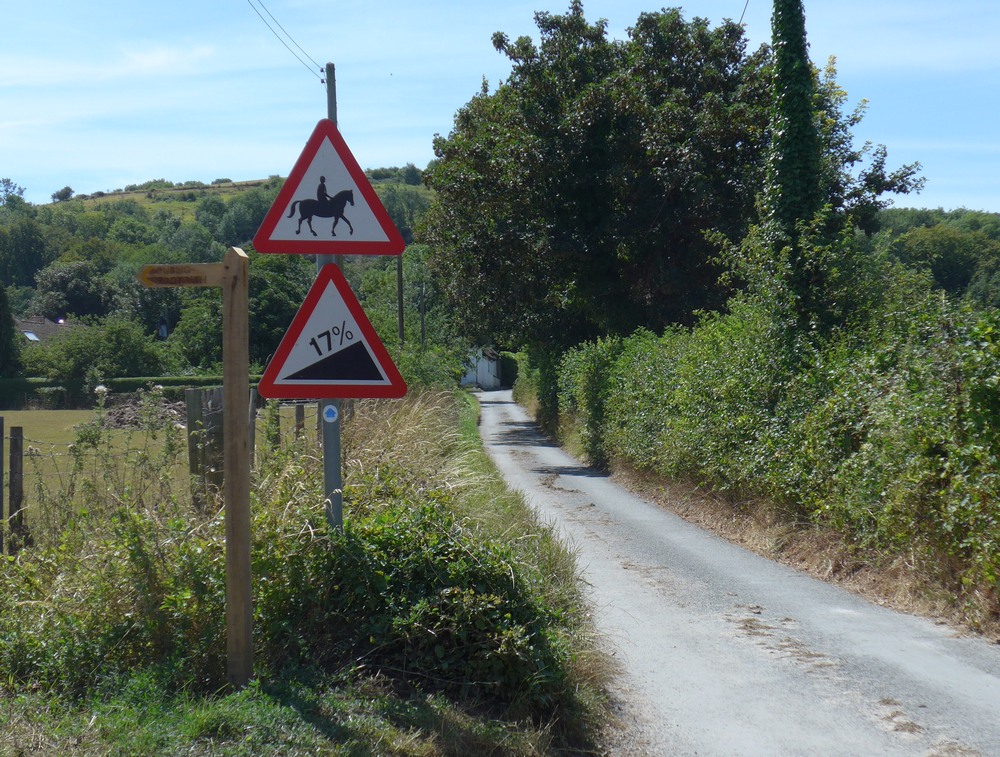 Advertised as 17%, it has a short section nearer to 20% which entailed getting out of the saddle, cadence dropping almost to stationary. Then it progressively eases off over the remainder of its mile length. Just before tackling it I poured water over my head for the only time today.

The effort is rewarded with amazing views from the top of the South Downs to the sea beyond. 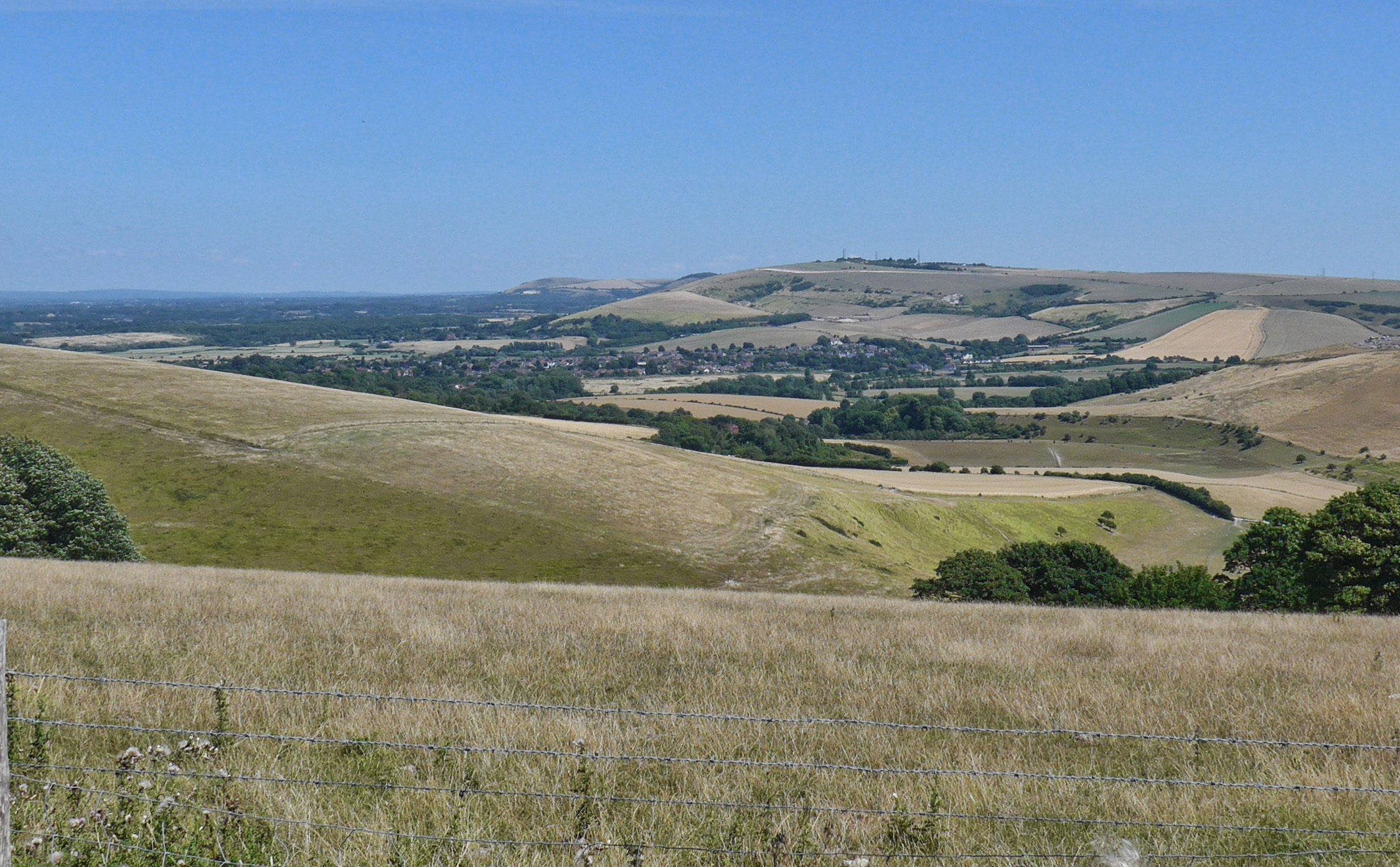 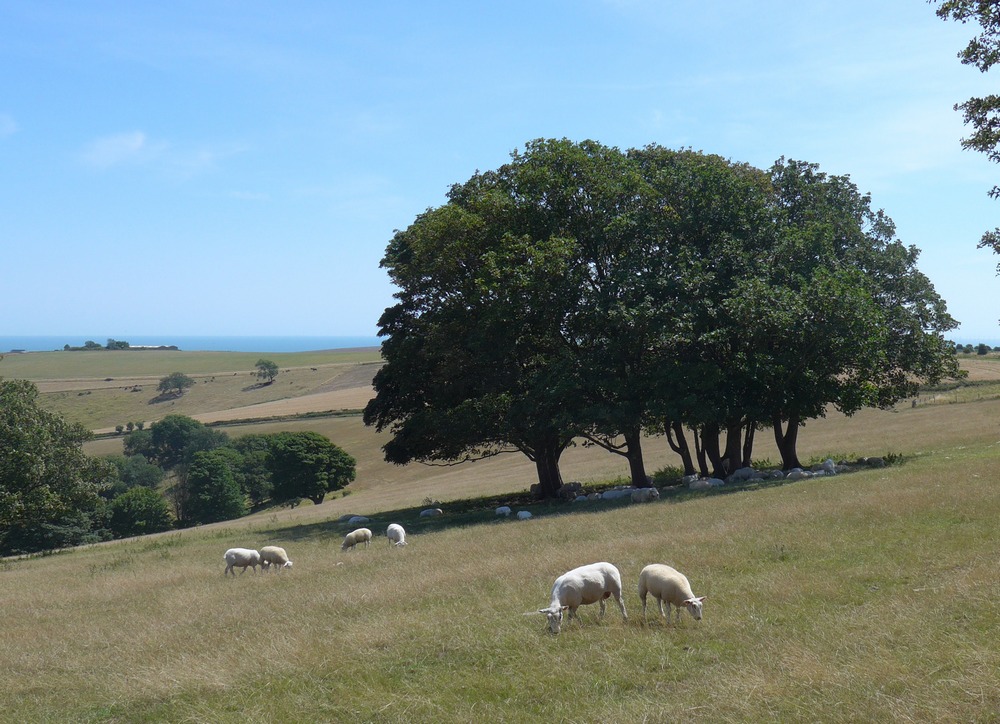 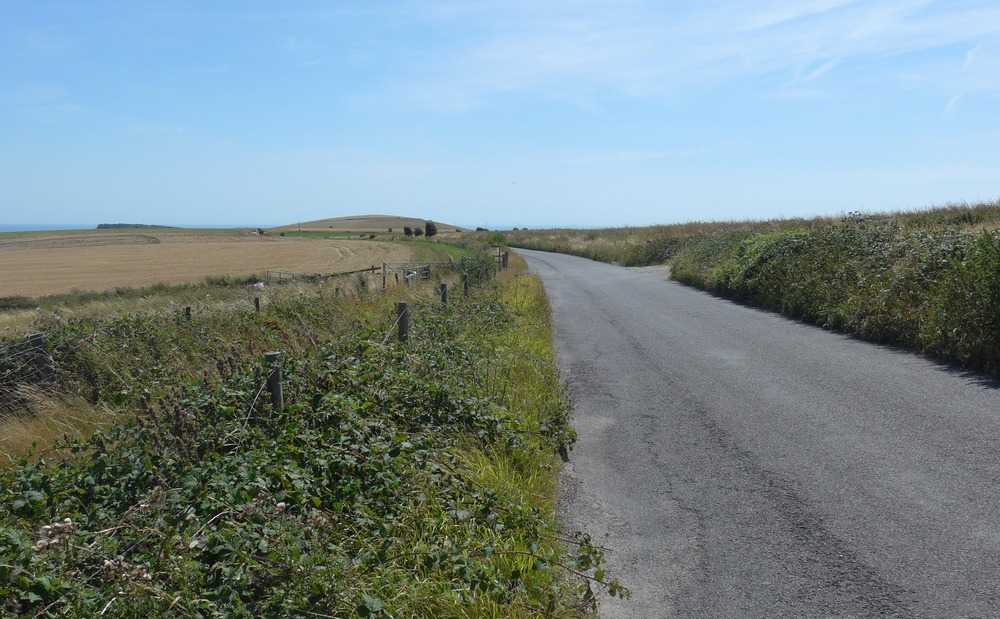 The road is superb with a three-mile descent down Titch Hill.

A short section of A27, then through Sompting to the coast at South Lancing. I recognised the spot that had been crowded before with people watching that fateful air show in 2015. Today it was much quieter. Now heading East, the wind was behind me and riding was effortless.

The next twenty miles along the seafront were exactly the same as before with the added advantage of the helpful tailwind, especially on the lumpy section between Rottingdean and Newhaven. 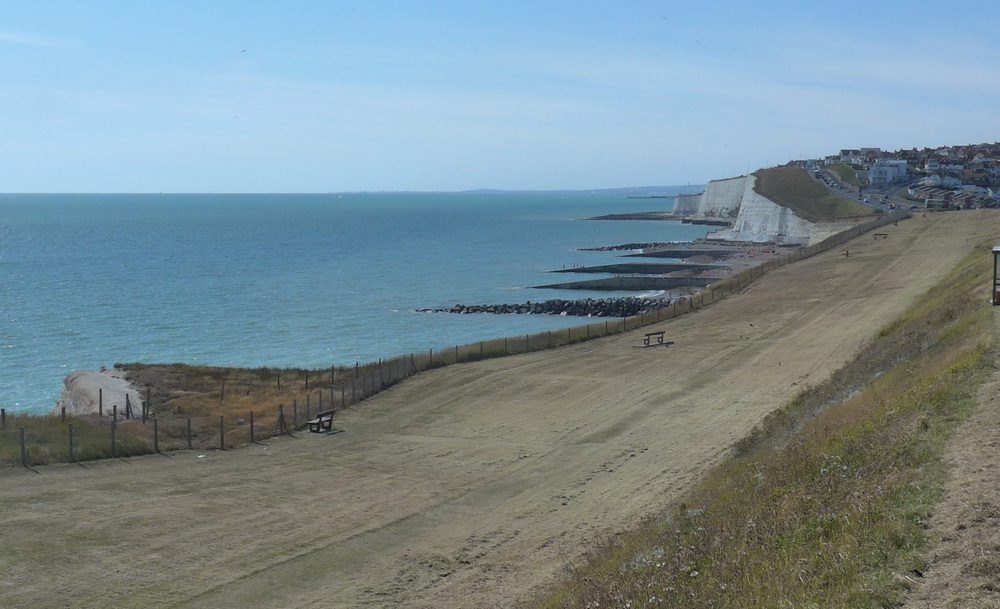 By the time I reached Newhaven I was feeling hungry, tired and concerned about  the fifty hilly miles still to go. I decided I needed something like chips. I stopped at Salt’s Café in Seaford. It’s situated in a large recreation area next to the sea. I had a jumbo sausage and chips, and a coffee. I also spotted some bread pudding so I grabbed a slab of that for the journey. I sat outside and took time out to enjoy the food. 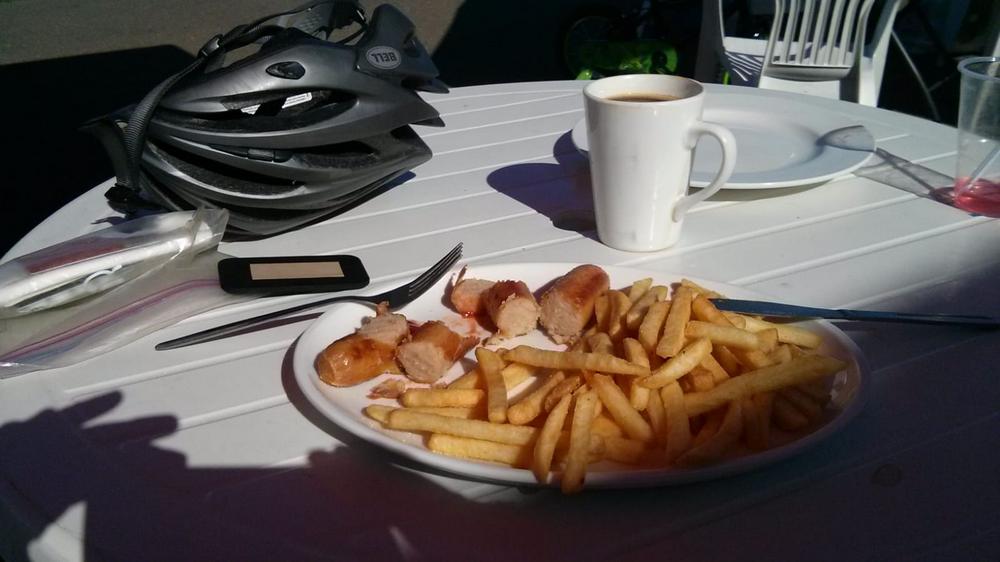 At the café I noticed that the time was 5 o’clock. I now had concerns about getting back before dark. I only had a rear light. Just before leaving the café, I bought a Fanta Orange. I briefly looked in the ice cream freezer and saw a Twister, but I didn’t really need one, so decided against it. I filled my front bidon with the Fanta and still had the other bidon nearly full with water.

So I set off on the final 47-mile leg of today’s ride, homeward bound. The SW wind was helpful the whole way. It was 3½ miles down to the Cuckmere crossing, 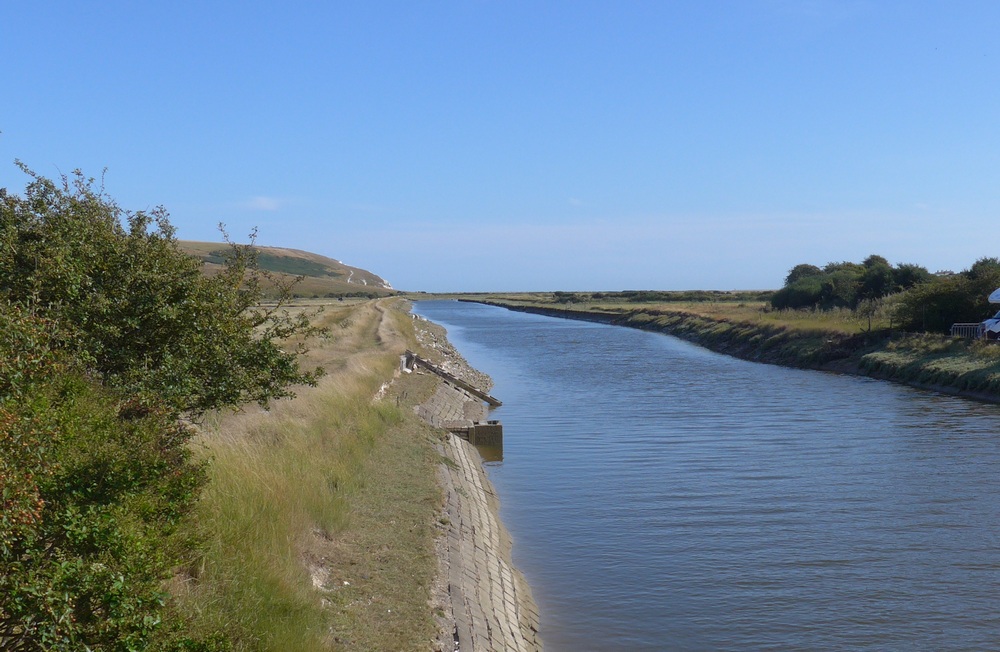 and then left into unknown territory on the Litlington Road which follows the Cuckmere valley. What a beautiful road! Glorious views to both sides. I hardly looked at the road, I was so busy taking in those views, especially after climbing Chapel Hill. At one point I casually looked to my right and caught sight of The Long Man of Wilmington 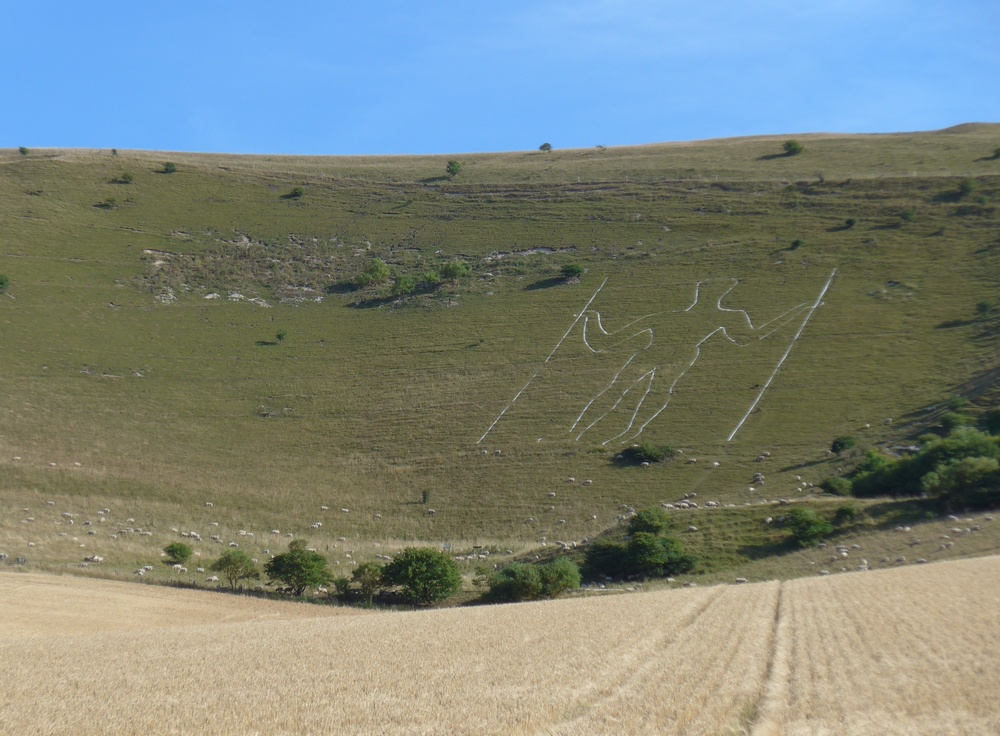 Once through Wilmington village, there was a bit of a wait trying to cross the busy A27, and then it was back to another great road that took me to and through Hailsham and back onto country lanes, climbing to Wood’s Corner and then on to the absolutely glorious two-mile descent towards Burwash. Then the steep climb into Burwash village where I was hoping to buy another Fanta, having nearly depleted the first one. But I didn’t see a shop and wanted to push on. Another great descent leaving Burwash, then climbing, dipping and climbing again to Ticehurst. Here I spotted a shop and refreshed my Fanta Orange.

The more I rode, the better I felt. The sun getting lower in the sky was bringing out the best of the amazing landscape, but I didn’t get any photos because I simply did not want to stop riding! I was enjoying myself now more than at any other point in the day. Hills didn’t faze me as I flew along. I even got my second quickest time up Balcombes Hill into Goudhurst! The sun was approaching the horizon now, but still light enough for me to keep my shades on. I had my rear light on anyway.

One mile from home I saw that the road to Barn Hill was closed so I just turned right and went up Hunton Hill instead, such was the mood I was in! OK, so I got my slowest ever time up there but what would I expect after 135 miles and carrying extra weight! I had managed to make it home without needing lights.

I literally did not want this ride to end. It was exhilarating! When I got back, I didn’t do my usual trick of standing there drooped over the handlebars, knackered. I got straight off my bike and just strolled around the kitchen. I was buzzing. I wouldn’t be surprised if I was going around whistling! The question is “Why was I feeling so good?”. Some of the factors could have been:

I honestly believe that the Fanta had played a significant role in the feel-good factor! It just tastes so goddamn nice when you’re thirsty. I had arrived home at 8:35PM and the temp was 21.5°C.

After the end of my previous ride I tipped out everything from my bag and weighed the things that I had been carting around for no reason (ie the things I didn’t use). They were things like unused energy gels, sunblock that I didn’t use, extra drinks tabs that I didn’t use, uneaten food. It came to 375g! At the end of today’s ride I did the same thing. I hadn’t eaten any of my savoury food (pork pie, scotch eggs) so had taken them 135 miles for no reason! Today’s extra weight was 200g (and that didn’t include the significant remainder of the heavy slab of bread pudding!), so not quite as bad. I think it’s time I went back to my old technique of not having a bag at all and just relying on cafés and shops to get food, etc