I’d already been for a shorter ride earlier in the day in case it rained later, but the weather held, so I was able to do my planned ride for today as well. The idea was quite simple – ride 13½ miles up the road to find a ‘scary’ (as another rider described it) tunnel, and a closed section of road, and then return back the same way, most of which I had already ridden (downhill) three years ago as part of a descent from Col du Mont Noir, on a ride described here.

I knew it was uphill, but I estimated that it wasn’t that much of a gradient, and that I’d be able to cover the thirteen miles in little more than an hour, and considerably less on the downhill return. The first five miles follows the course of the Bourne river, and I think I assumed that the road would be rising at the same rate as the river because I could remember the water being right next to the road when I did it before.

I set off from the campsite at just after 6pm. I crossed the bridge over the river and onto the road that follows the gorge. 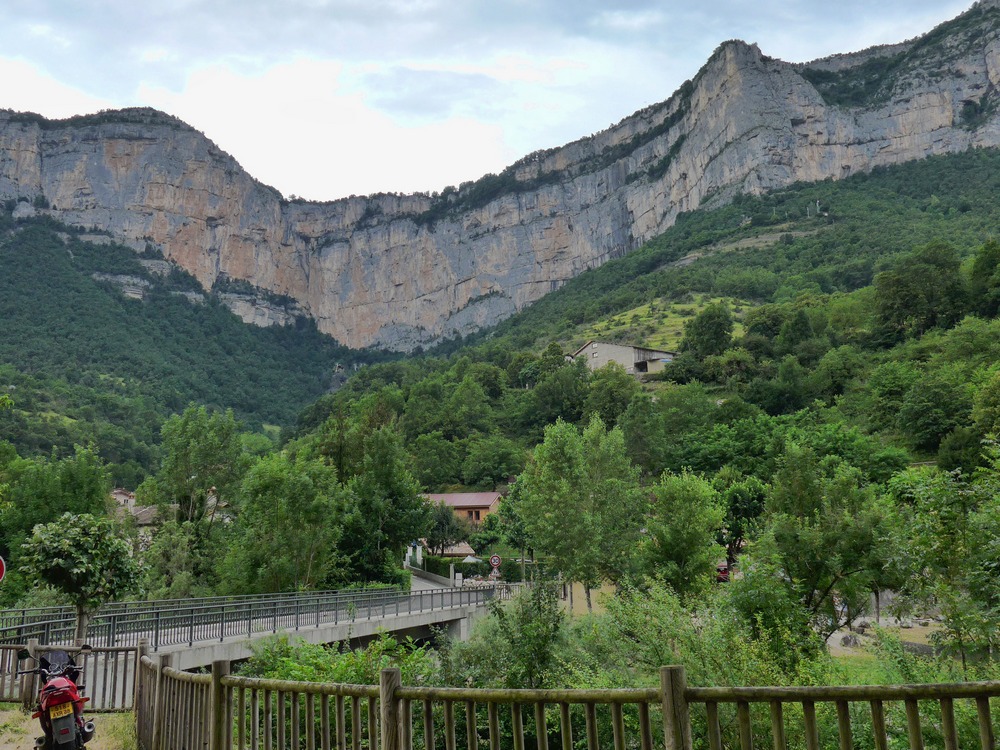 Immediately the road was steeper than I had estimated. I hoped things would get easier. After a mile or so I could see that I had climbed far above the river to my right, which was now deep in the gorge below me. Hmm, that didn’t make sense because I could remember from before that the road was at the same level as the river further along the route. So how could the river gain all that height further up? Either the road descended (which I knew it didn’t), or my memory was wrong, or there was some sort of massive waterfall somewhere upstream.

I put that puzzle to one side while I did some mental calculations about estimated time of arrival at the tunnel and whether I could get back before dark, based on my much slower than expected speed. For a start, I guessed that my return would take about half an hour to do the 13 miles downhill. But my average speed up this steeper than expected gradient was just over 6 mph, so I would take at least two hours to get there and that didn’t account for photo stops. Doubts began to creep in about whether I’d be able to achieve my goal. But I pushed on, hoping the gradient might ease up.

At one point I heard the sound of rushing water. A gap in the trees revealed at least a partial answer to the question of river height. There was a dam. 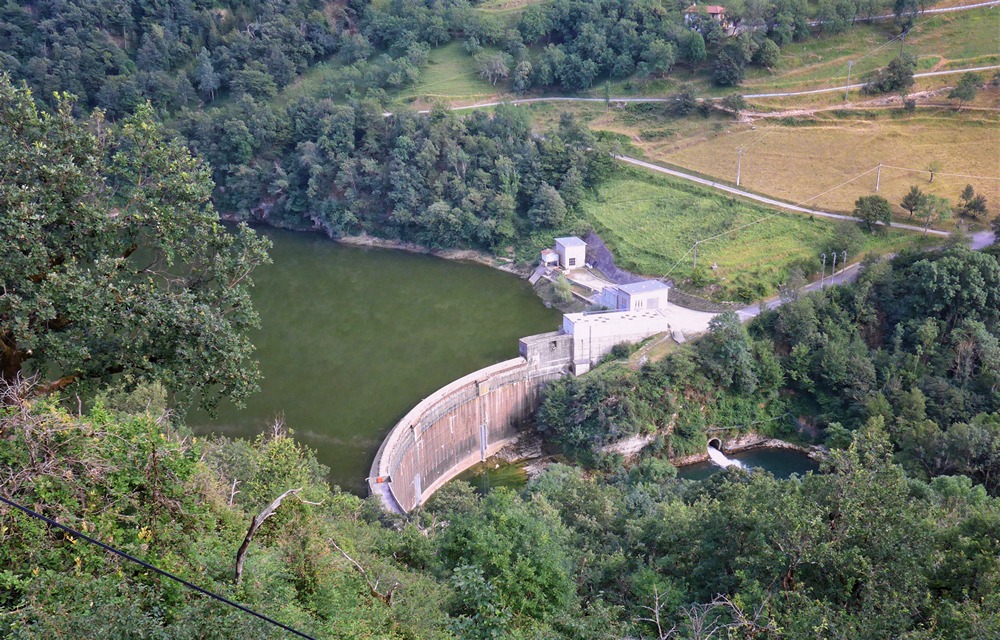 But, as you can see, that did little to bring the river up to road level. So the mystery remained, for now. Twenty minutes, or a couple of miles, more climbing put me even higher above the river. I was almost looking vertically down onto it 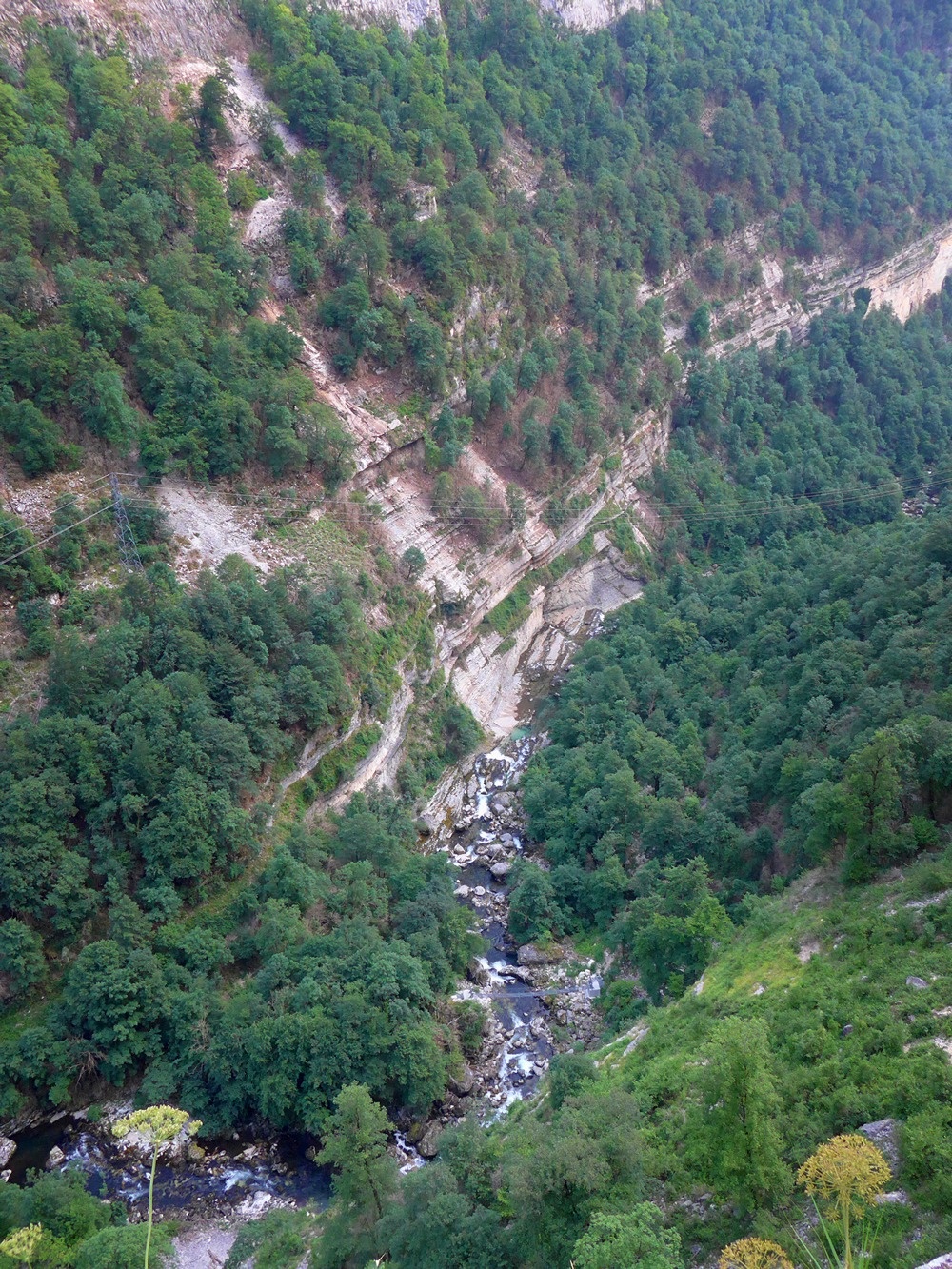 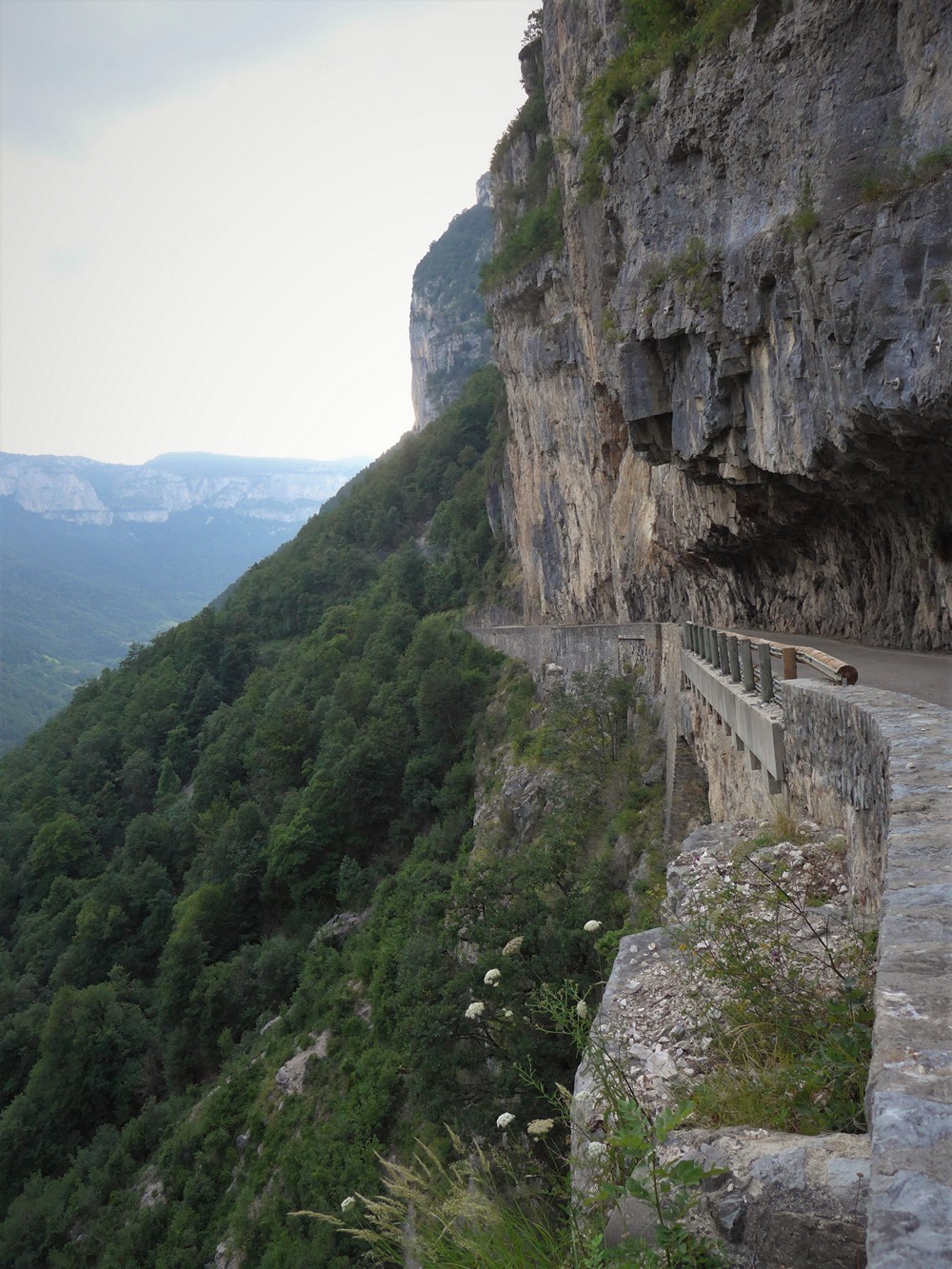 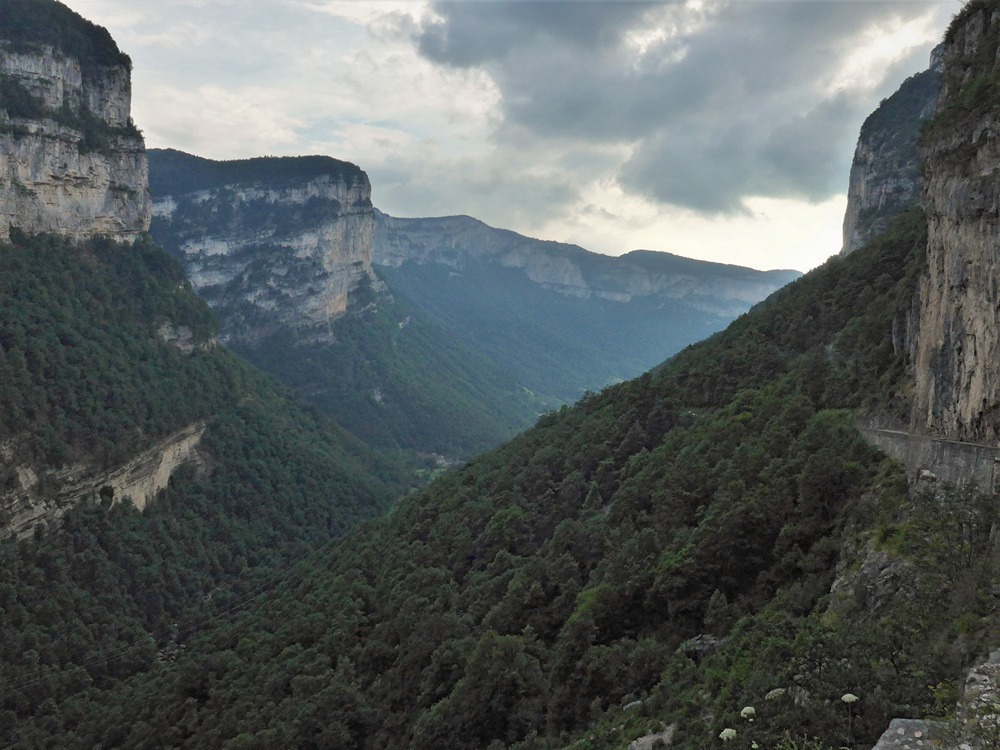 If you want to know what tens of millions of years feels like, just consider that all the gorges, canyons and cirques in the Vercors have been formed by water erosion! 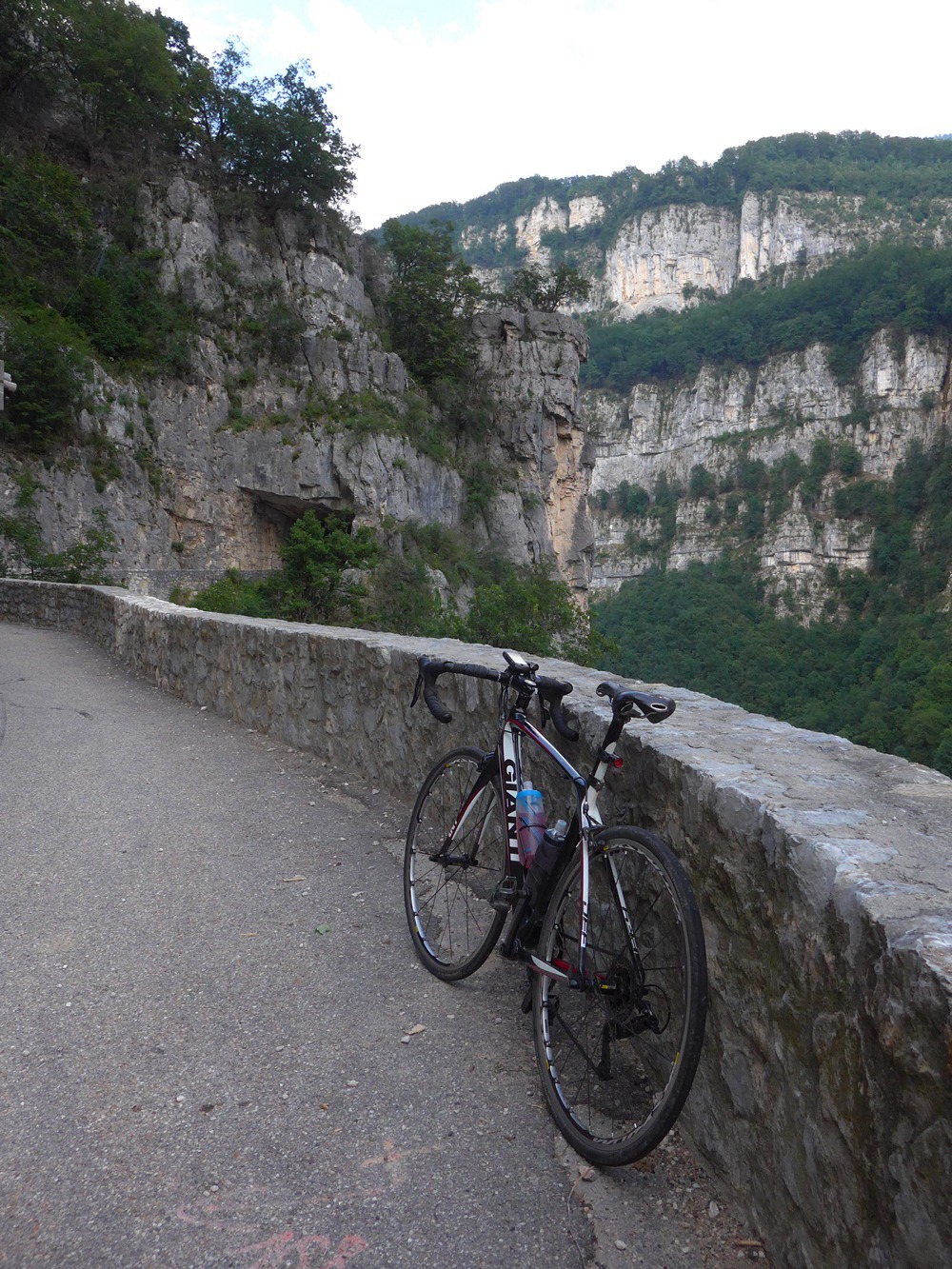 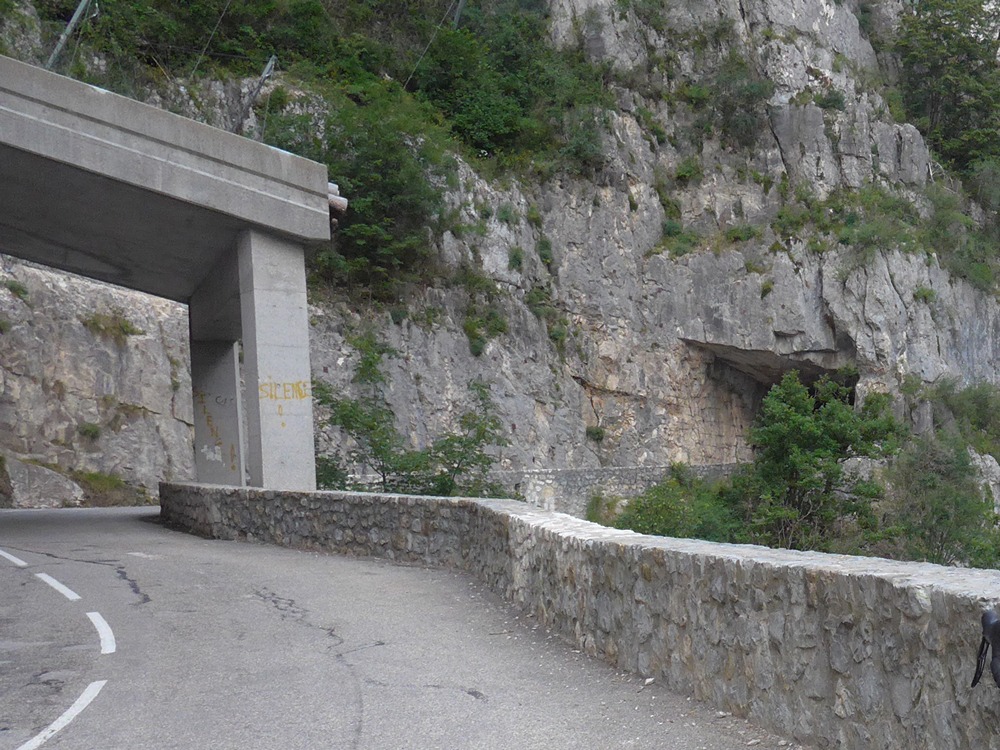 … when I heard the roar of rushing water above my head. It was quite unnerving. I thought it was probably a mountain water source being diverted from the road and I expected to see an outlet in the rocks below when I looked over the edge, but I soon realised what it was. 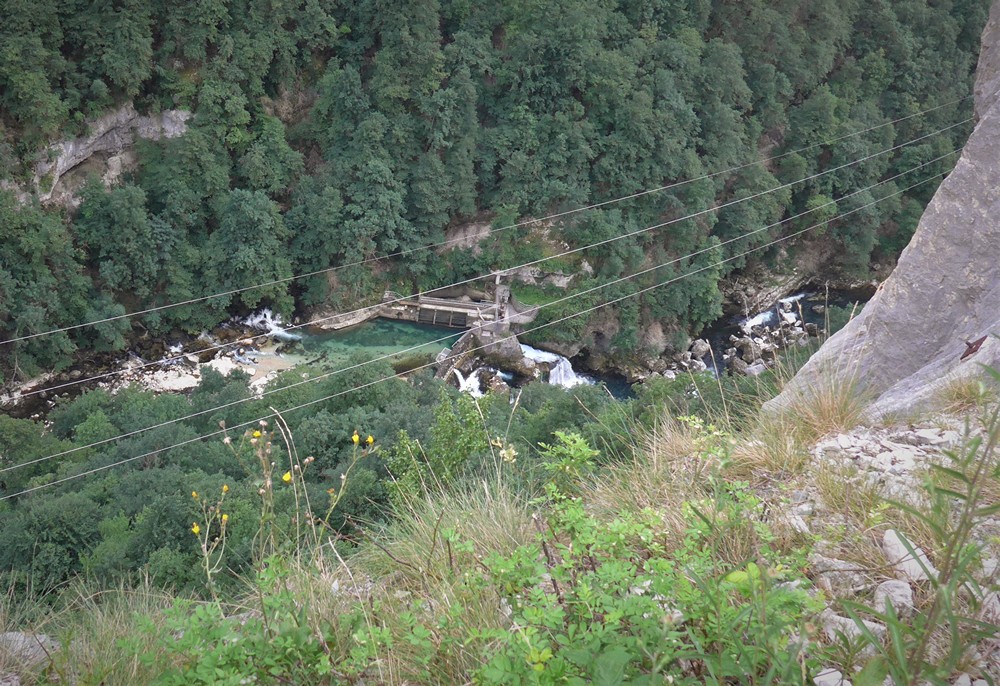 There was another dam in the gorge below and the noise I’d heard had been the sound of that reflecting off the concrete above my head! 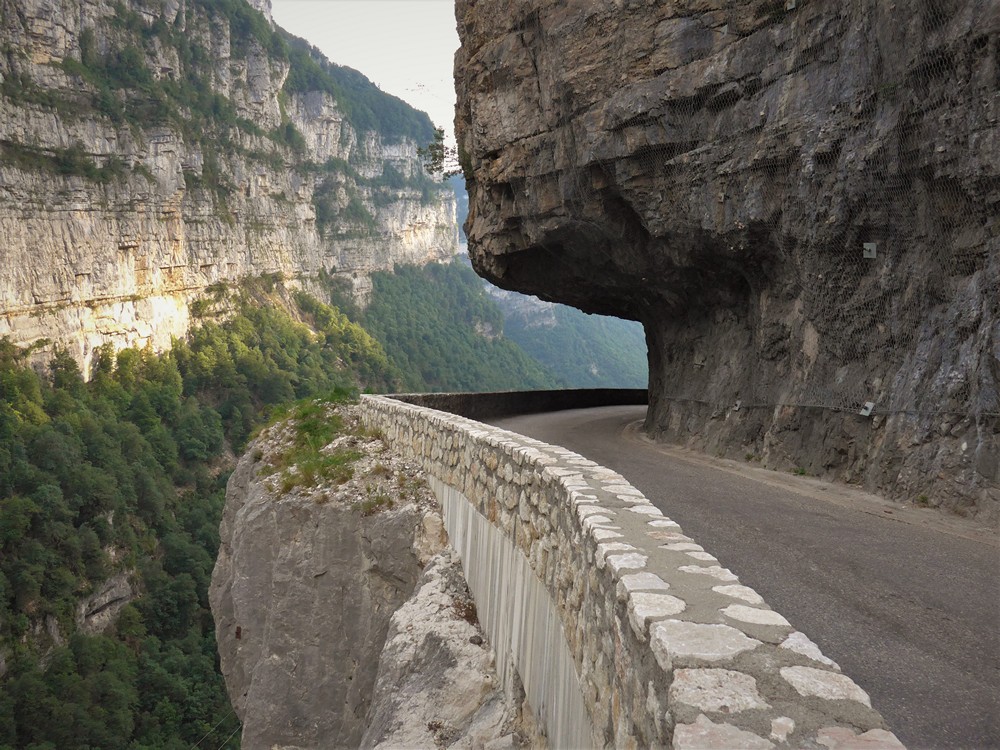 All these photo stops were delaying my ETA. In fact by now I was seriously considering the possibility that I may not reach the scary tunnel. Speaking of tunnels, I soon approached another one, the Tunnel d’Arbois. Being dark and noisy inside I elected to take the old closed road round the outside to the right.

There was a token pile of dirt across the old road but no real effort had been made to stop walkers or cyclists from using it. Some ropes fixed into the rock indicated that rock-climbers had been there – I read somewhere that the fire service practise on rocks in the Vercors.

The old bit of road seemed narrow and dangerous, which is presumably why they closed it. However, the main reason for closing roads around here is due to rock falls. In fact there have been several rock falls on this stretch of road over the years, one of which was in front of this tunnel: 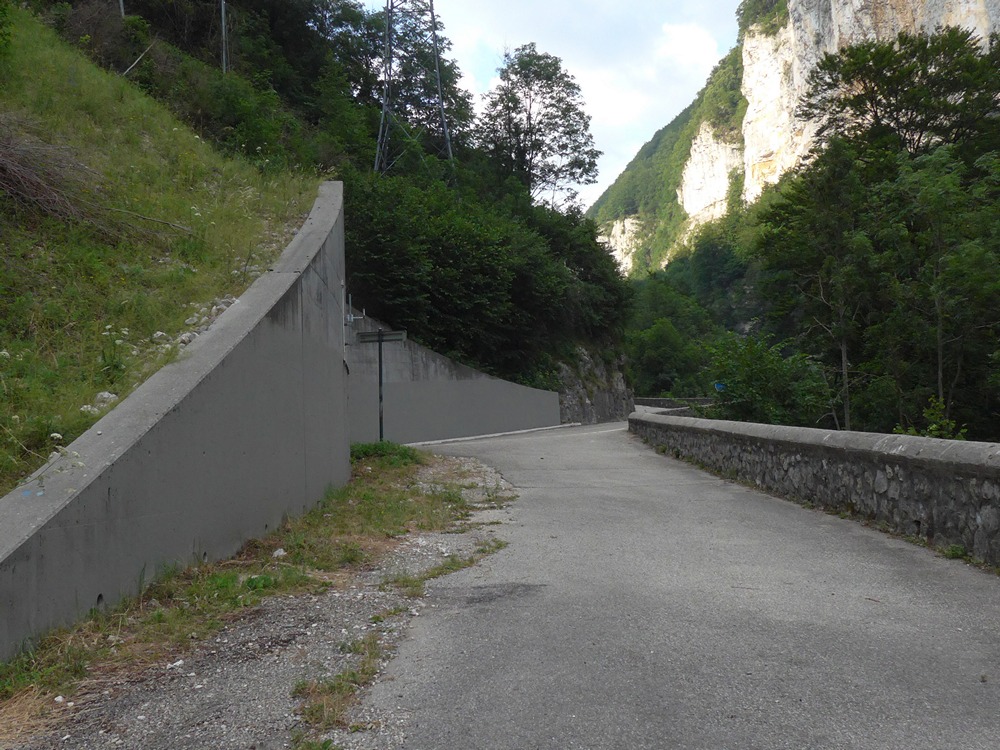 A short while after that, as the gap between the gorge walls narrowed, the river gradually seemed nearer, altitude-wise. 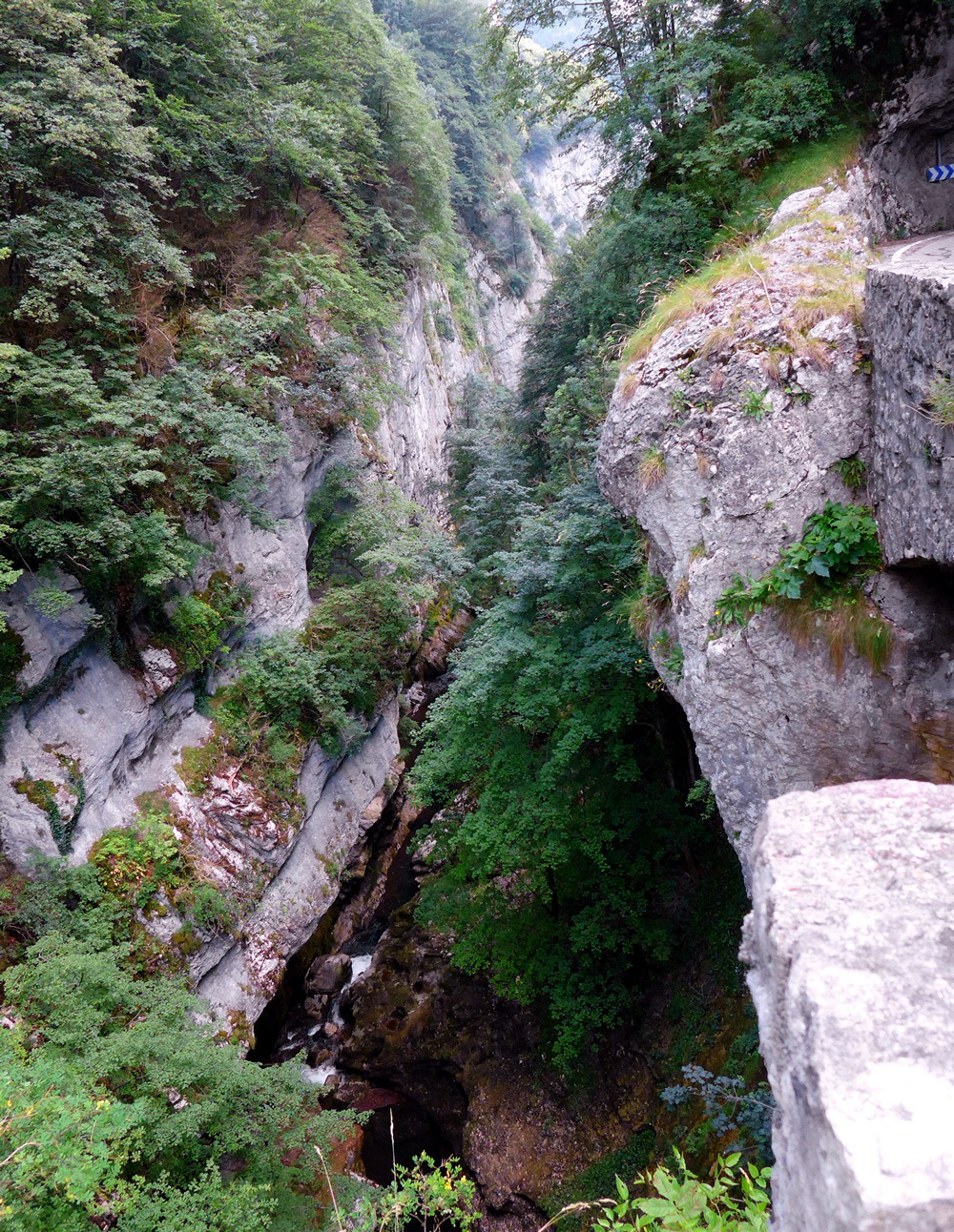 Then, around another couple of bends, the river was right there next to the road. 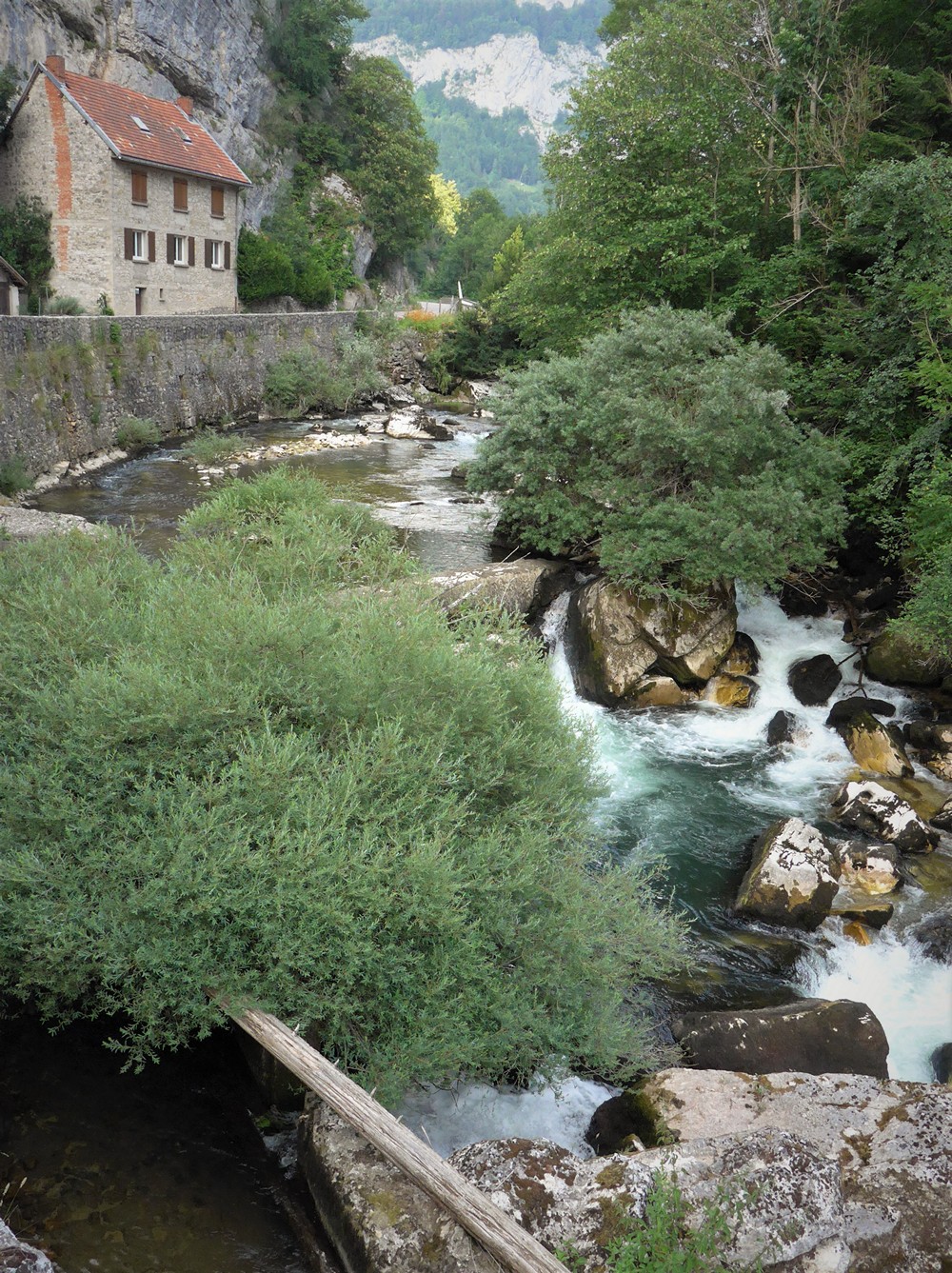 So my memory hadn’t failed me after all. I can only assume that the river loses a lot of its elevation along the gorge by plunging down down extremely steep rapids.

At this point, about 4.5 miles into the ride, the gradient eased and I thought it might be OK from thereon. By this stage I had sort of given up on reaching my goal but this new gradient inspired me – I wondered how long it would last. I was now doing 13 mph or so. When I reached the road to Rencurel I turned left and away from the path of the river. The road almost immediately ramped up to 7% and my speed once again dropped to 4 mph. Around each bend I was hoping it would ease, but no. So I officially gave up on reaching my goal and hoped that I could reach the bottom of the road that I had descended from Col du Mont Noir 3 years ago. But the slog was grinding me down and the sun had disappeared below the still towering rocks of the Vercors Massif. After a while I changed my target again to reaching Rencurel.

When Rencurel came up I decided to see what was on the other side. My new target became 8 miles – I was nearly there so I pushed on. I nearly gave up on that but gradually I approached it. At one point I was at 7.94 miles – I thought “only another 6 1/100ths of a mile to go – that’s 6 lots of 17 yards”! I was so pleased when 8 miles came up on the Garmin. I found it funny musing to myself that I’ve been on rides where I’ve been relieved to see 100 miles come up, or only 60 miles to go or even in one case when 250 miles came up. But this was a measly 8 miles that almost gave me the same sense of relief! So, at 8.00 miles exactly I stopped and turned around.

Needless to say the descent was excellent. 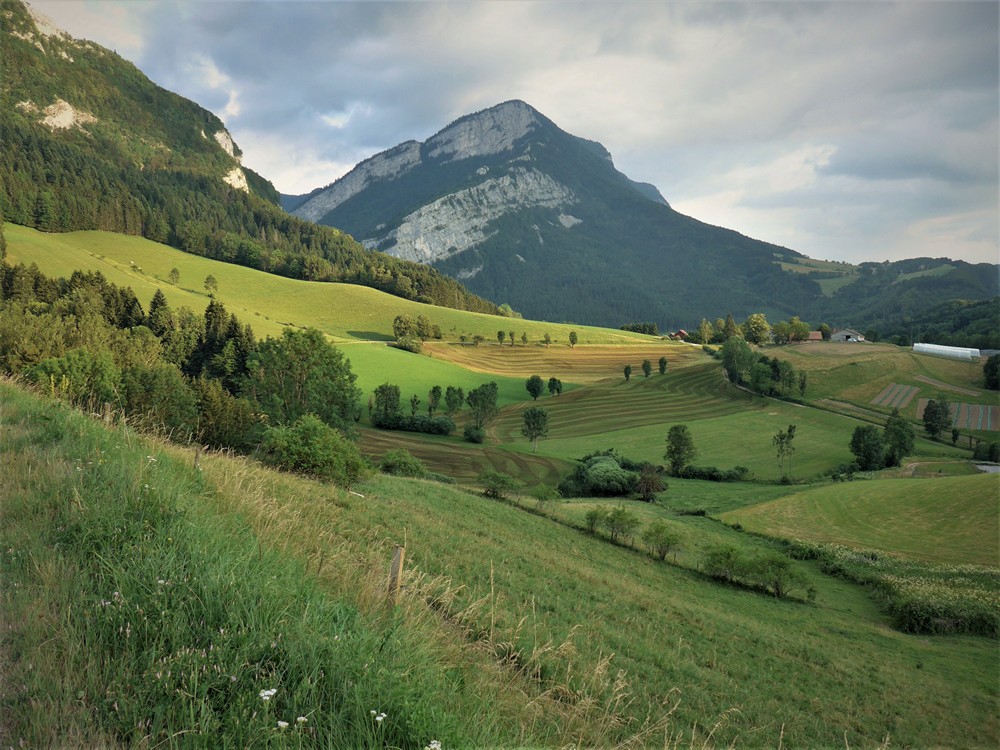 With fast wide roads, often with curves that you can see beyond, enabling you to use the whole road to straighten the bends out, I sped along effortlessly, averaging 24mph. There was not much traffic – only one or two cars passed.

A video of this descent, from three years ago can be seen here.

It took just over 20 minutes to get back.

I had climbed nearly 2000 feet in the eight mile outward leg. An average gradient of 5% doesn’t sound much, but I should have realised that I wouldn’t be able to achieve a 13mph average. Still, you live and learn, and then forget again!

The sun was coming out as I got back to the campsite. 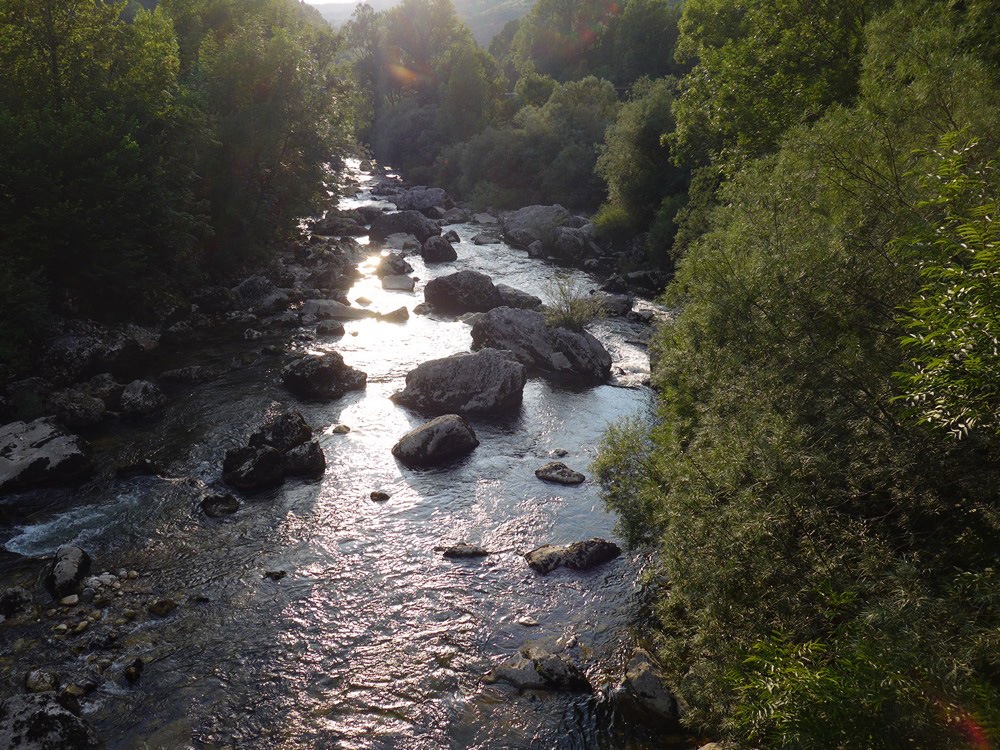