This ride was to be the last of my 2021 French tour. I had moved further south to enjoy some warmer weather near the Med.  There is a completely different vibe here compared with the area around Nice, even though they are both in the ‘south’ of France. I would describe it as more laid-back.

The surrounding area is the Massif des Maures, a low mountain range (I would call them hills) that stretches along the Mediterranean coast between Hyères and Fréjus. The hills are covered with forest, but the trees here are not as tall as those I’ve been used to further north. My route started from the village of Collobrières, about 16 miles inland, heading south over the hills and down to the Med, then along the coast for about 7 miles before turning inland over hills again and down to and along a valley for about eight miles, through the town of Cogolin, and then another long climb into the hills and back to base.

In contrast to the dearth of cyclists elsewhere on my recent rides, this place was veritably teeming with them. Maybe they were drawn, like me, to the warmer climes.

It was a sunny, warm day; I wore short sleeves with a base layer and I only put my arm warmers on for the last descent. I set off at  12:30, after letting the late-October sun warm the day up a bit.

Through the village of Collobrières, I turned off the main road onto a quieter road into the hills, the first climb beginning a couple of miles into the ride.  It was a steady gradient of around 5% for 4 miles. Using 3rd and 4th gears I climbed through the view-less forest up to the Col de Babaou without stopping, nearly all in shade. 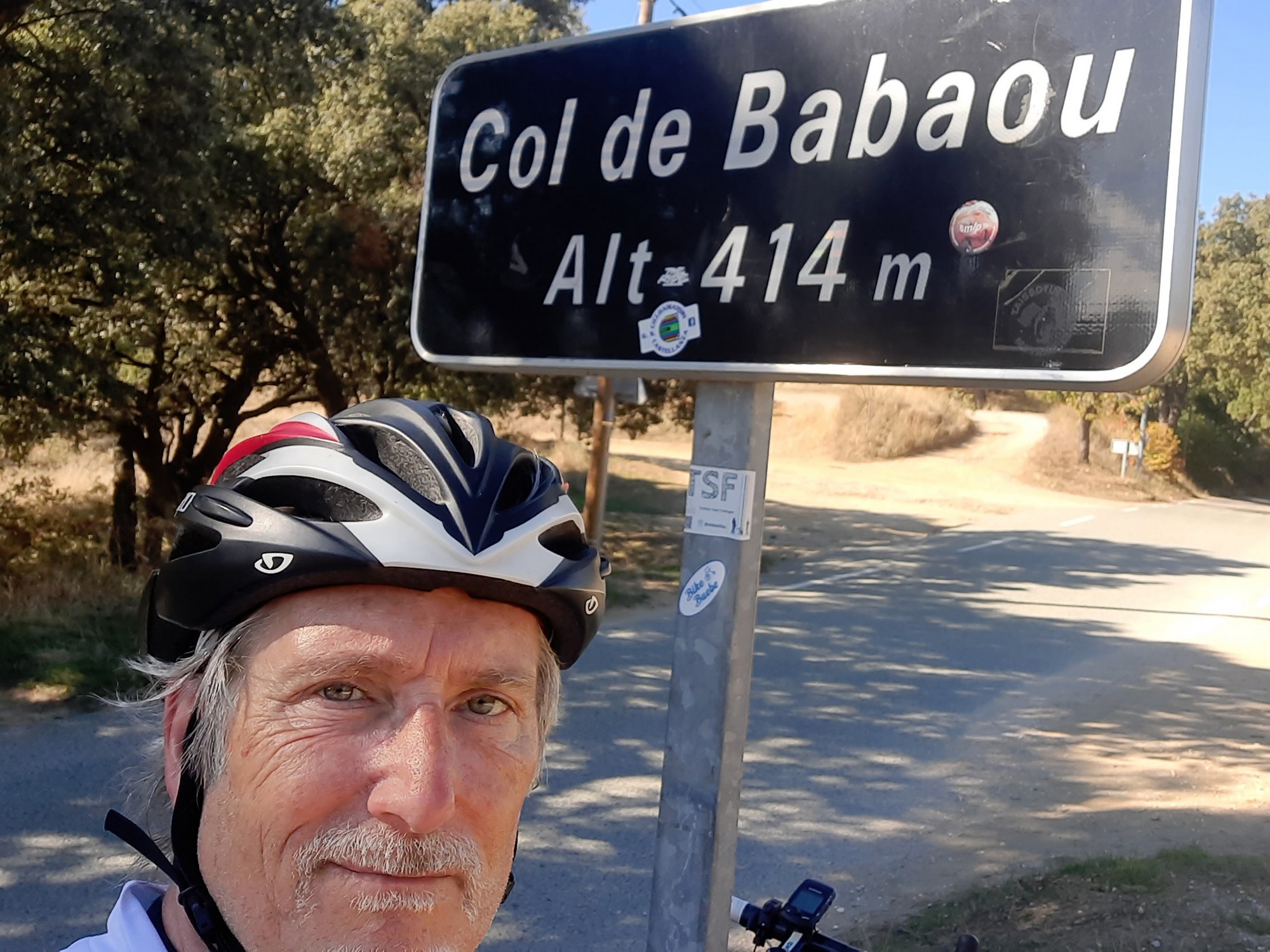 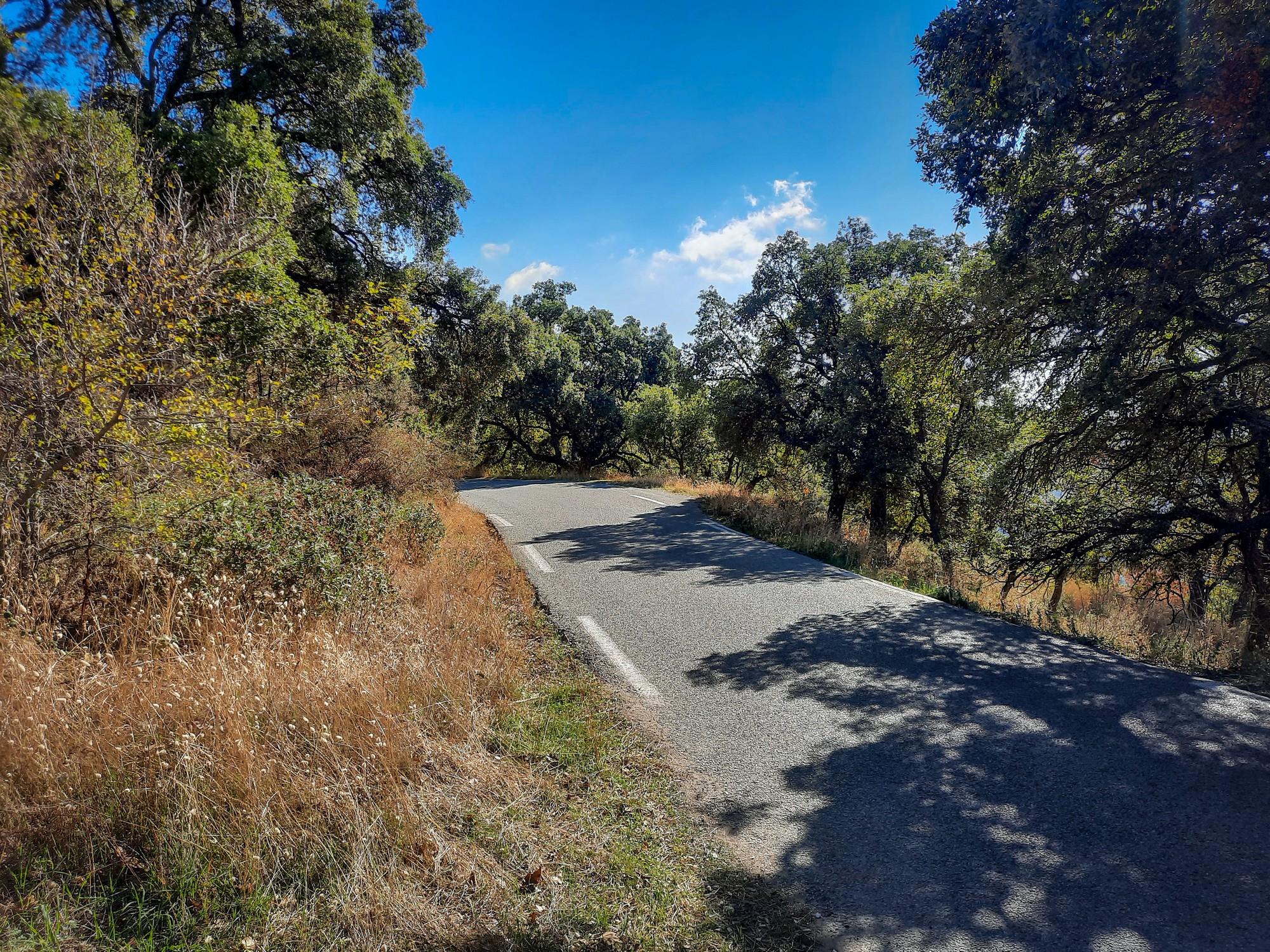 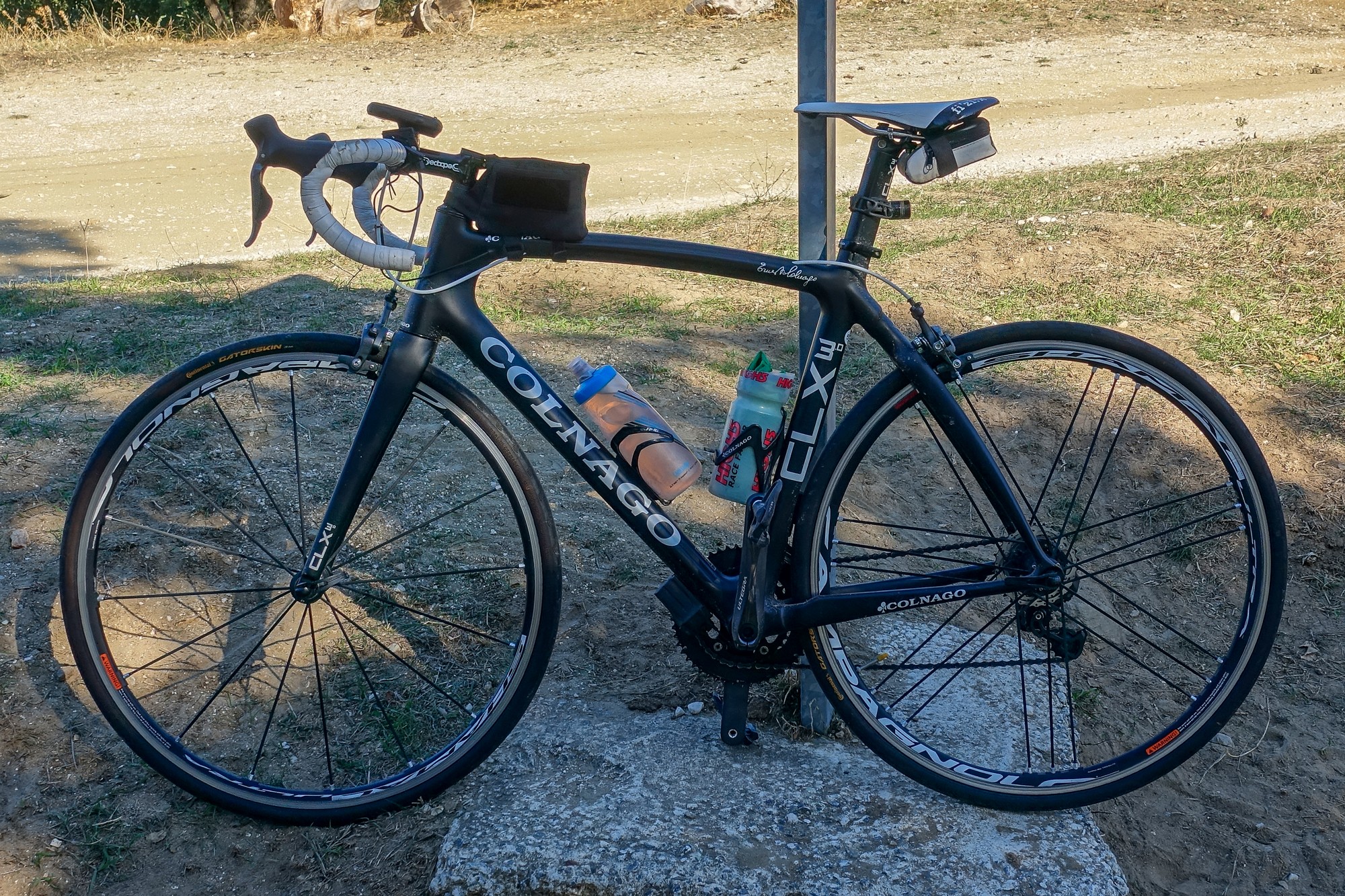 After the col there were views over the hills to the Mediterranean and more exposure to the sun. Traffic was almost non-existent. 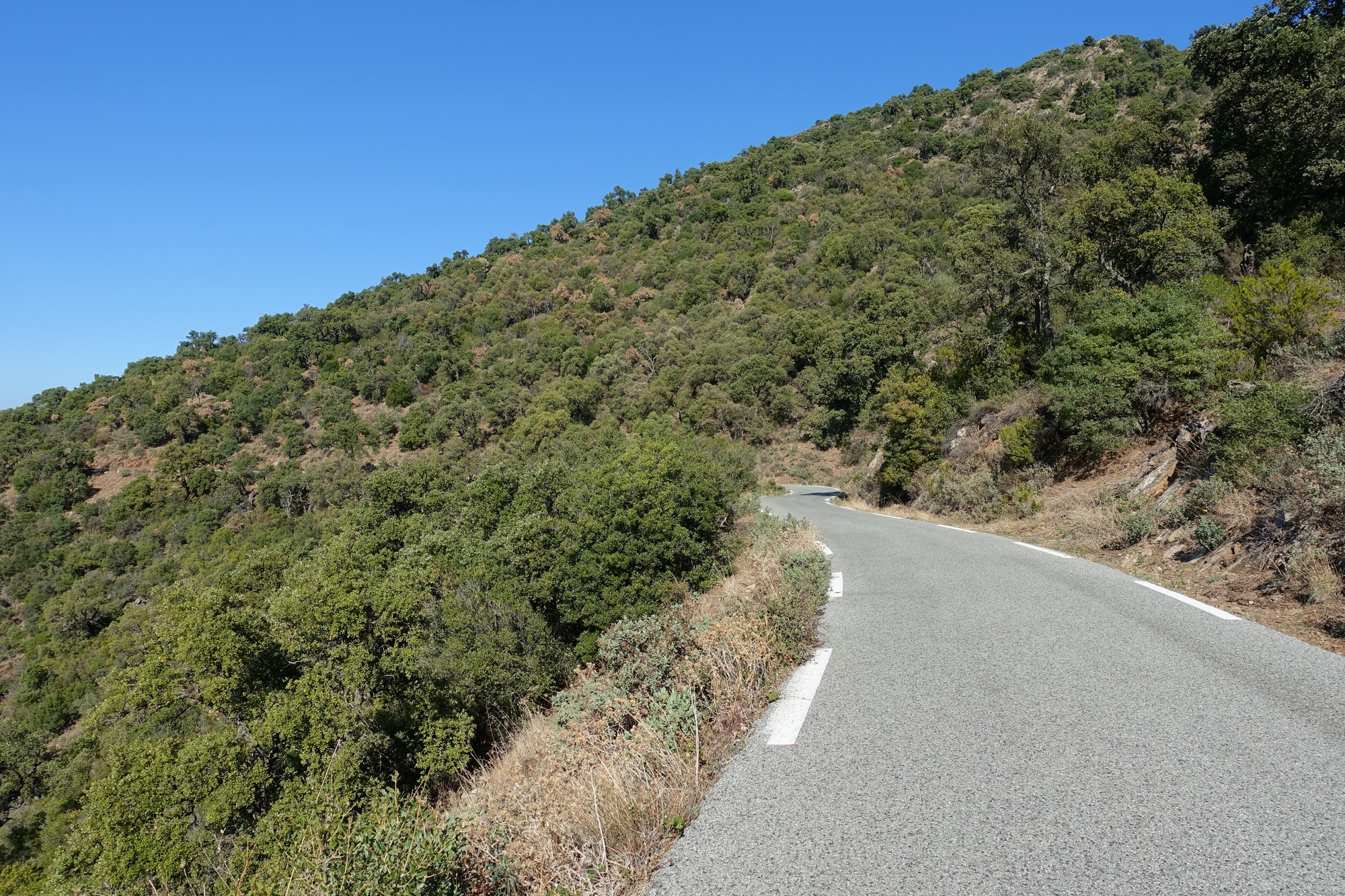 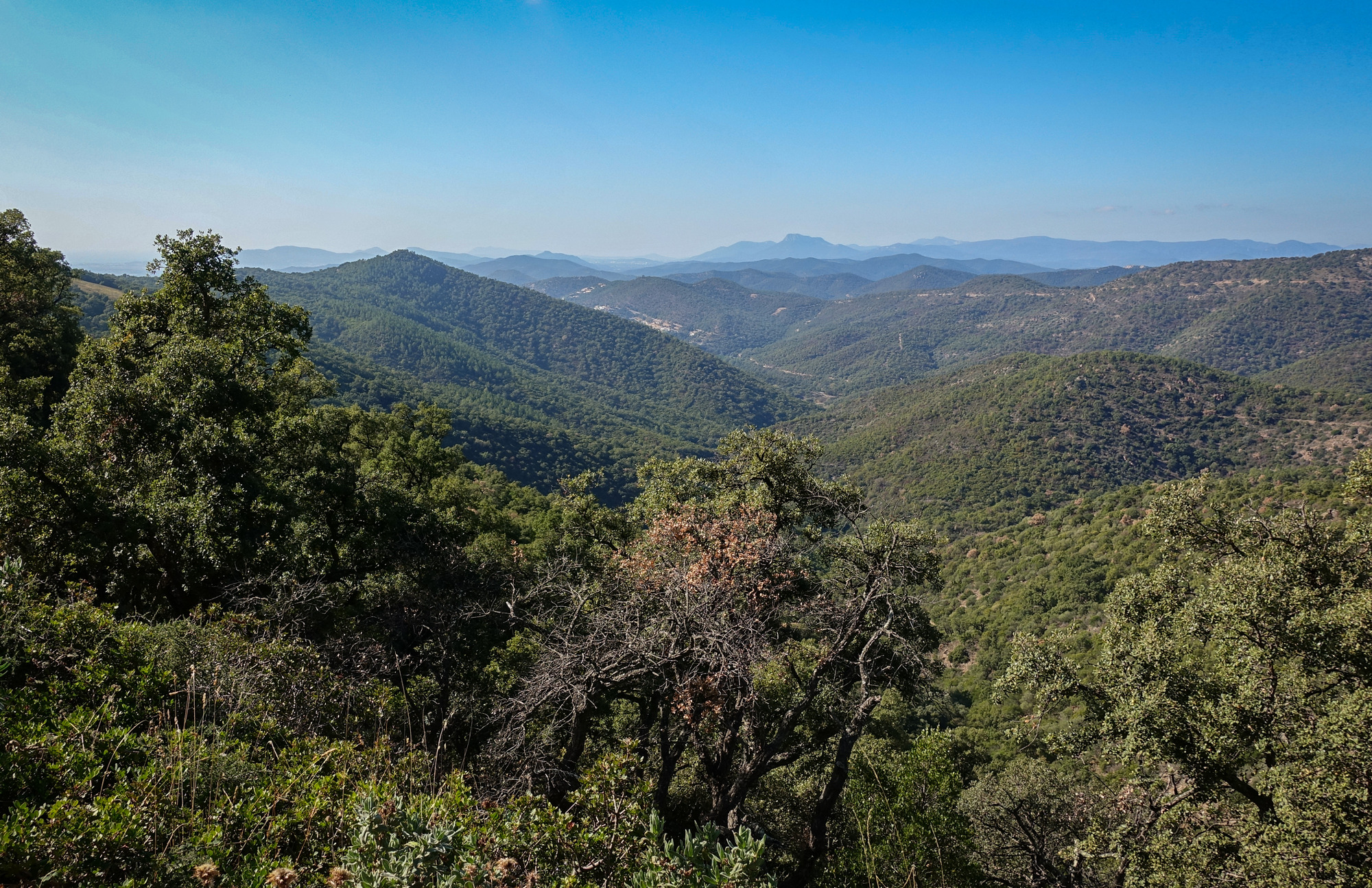 Eight miles and forty minutes later the road had descended through the wooded hills to Bormes-les-Mimosas, and from then on I was riding through more populated areas towards the sea.

Once I’d reached Le Lavandou, I aimed straight for the sea and sat on a bench by the beach in the sunshine and completely relaxed. 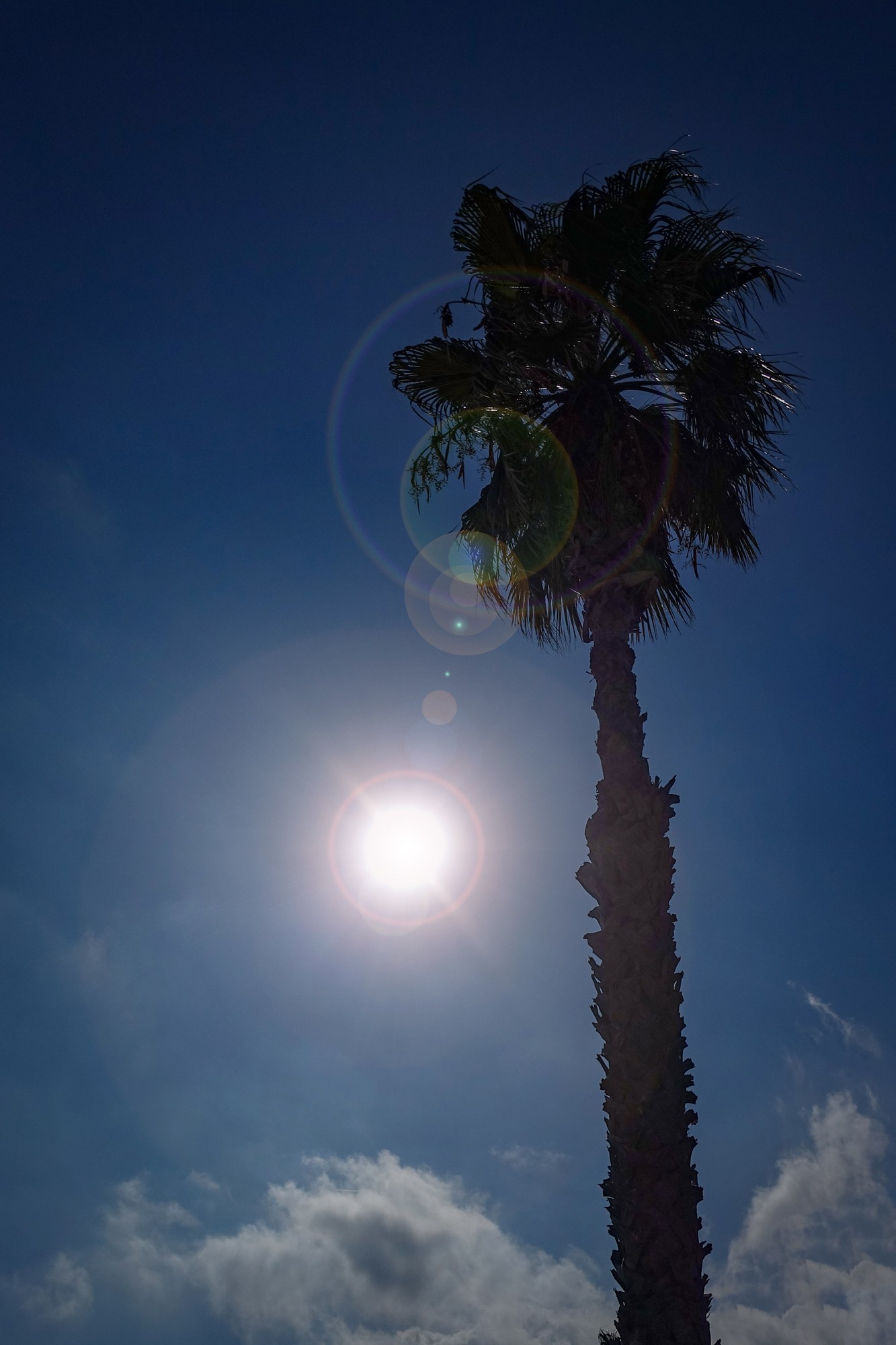 I sat there for 45 mins and didn’t particularly want to move from sitting in the  lovely sun. But I had to crack on – the days are not that long in late October and I still had hills to climb. The next seven miles were along the coast road towards Rayol-Canadel-sur-Mer.

Some of the road along the seafront was  busy with fast traffic and not much room for bikes. It wasn’t enjoyable. At one point, a guy shouted out of his car window to tell me there was a cycle path on the left. So I used it from then on. It was brilliant, with two lanes, road markings and evidence of having been repaired. It was better than most actual roads in the UK.

In Rayol-Canadel-sur-Mer my Garmin told me I was off course. I backtracked slightly and zoomed in on the map and saw that there was a road where I could get back to my original course. It turned out to be a ridiculously steep hill, 20% or more. Luckily it didn’t last long before I was back on track. The route turned away from the coast and headed inland and started to climb again. 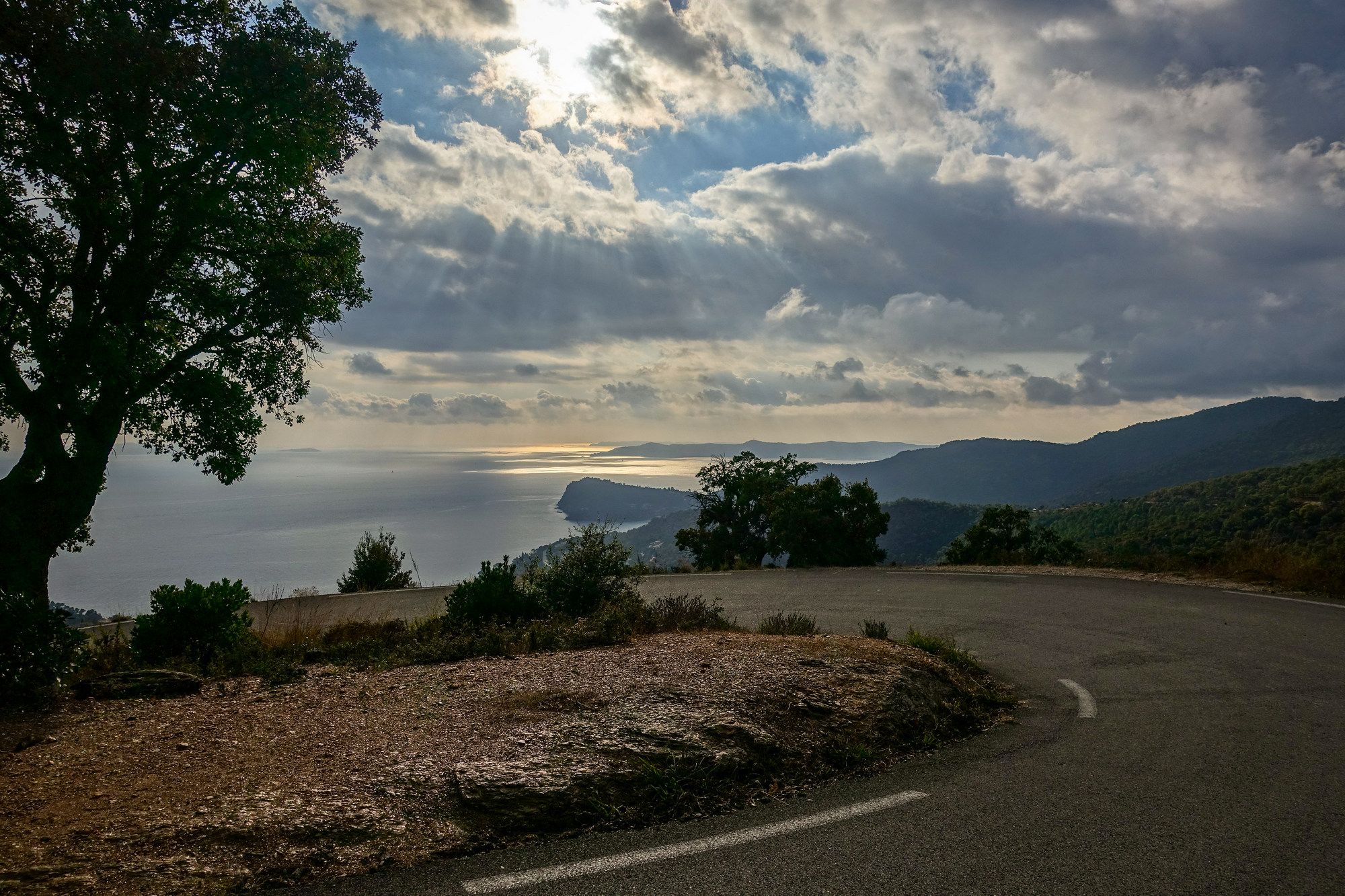 Three miles at around 6% later, I reached Col du Canadel

I’d reached the top of the small lump in the middle of the gradient graph.

Even though it looks small it had been a significant amount of work, which made me start dreading the big last climb coming up. It was at that point that I started worrying about the time, and running out of daylight. I think I had sat for a bit too long in the sunshine.

Speaking to a bloke at the col, I was trying to decide or work out which road I should take for Collobrières. He said he had also ridden from there. He pointed at one road and said that it went to Bormes-les-Mimosas,  but I’d already been there so I knew that wasn’t the right road for me. I think he had been trying to warn me about something on the road I eventually took, but I couldn’t really make out what he meant. 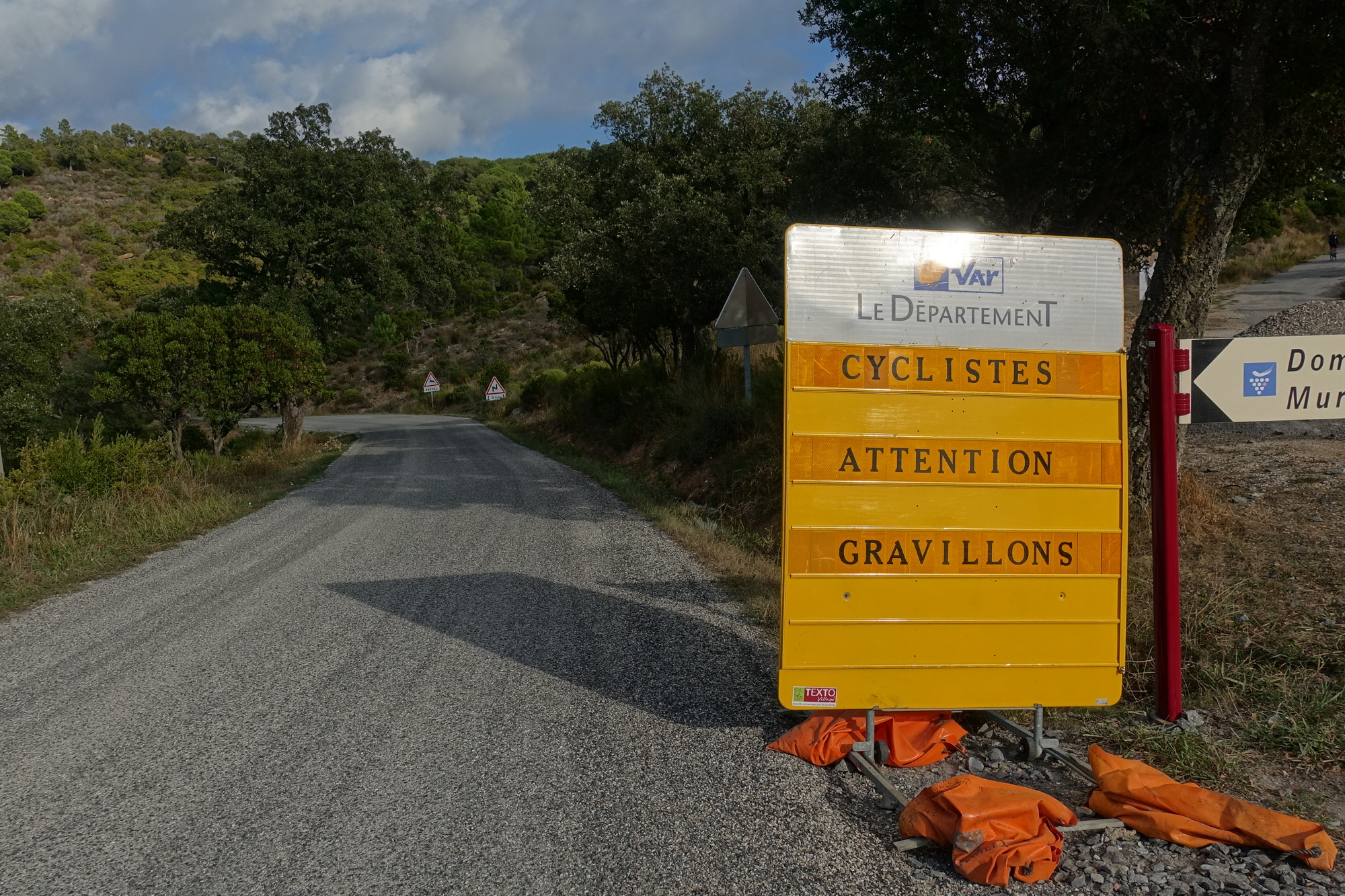 The descent from Col du Canadel had lots of gravel on the road. It demanded more concentration and took the edge off my speed, but at least I was happy to be going downhill for a while.

I was glad to be back on a gravel-free road when I reached La Môle. And shortly after that, my route joined a main road which was quite narrow and straight and had fast moving traffic. I wondered if this is what the bloke at the col had been trying to tell me about.

Because of the time worry and the flat terrain, I averaged 19mph over the next 4½ miles. But it was very stressful with the noisy traffic all the way to Cogolin, where my route turned west. Soon, I was glad to be back on the quiet road into the forested hills.

The sun was getting lower. But as I climbed into the hills the temperature rose.

I was thinking how all the trees looked nice silhouetted against the setting sun. 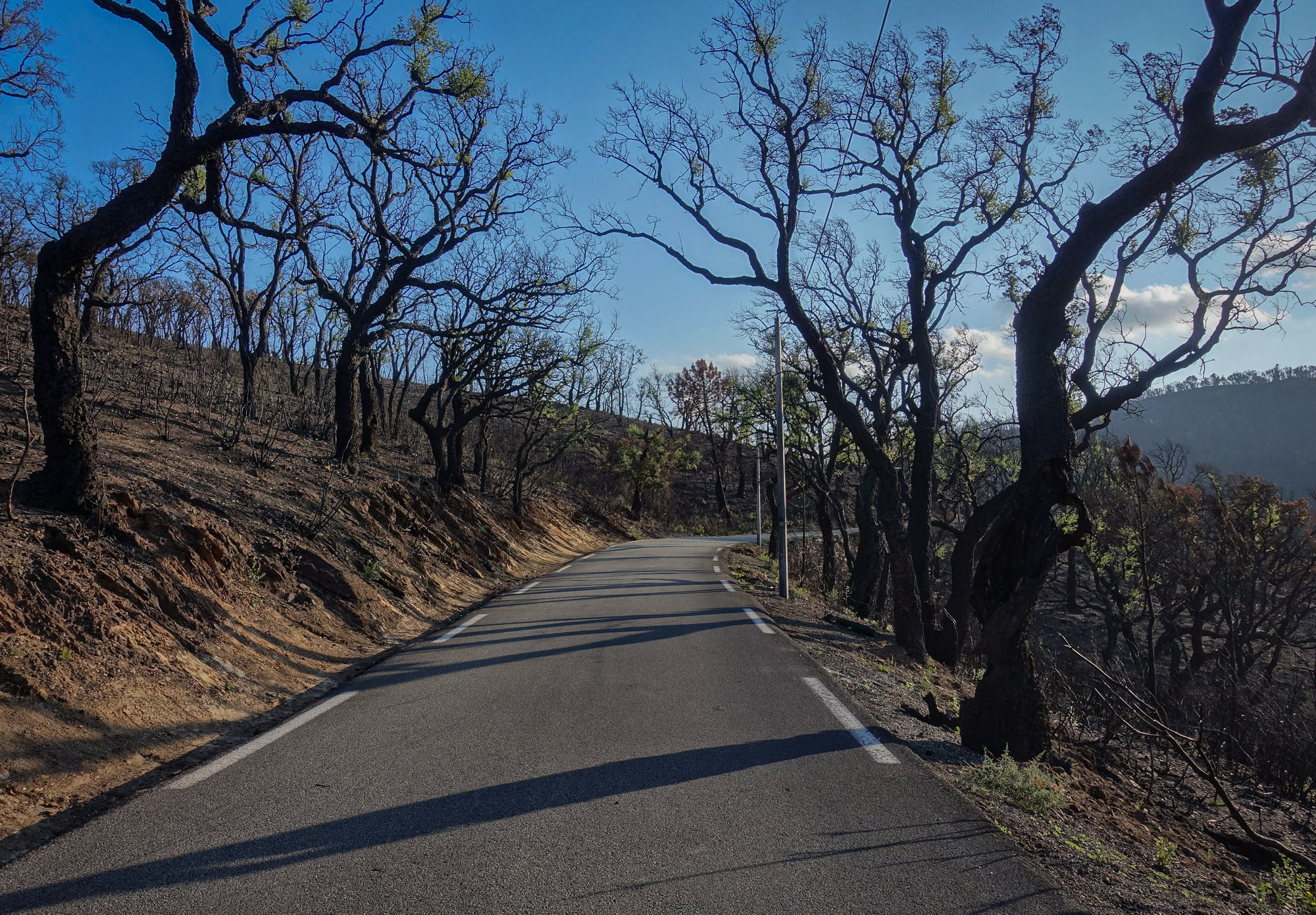 They all looked quite trim so I wondered if they’d been topped or something – there was certainly something odd about them. Eventually I realised that they were actually all black even when not in silhouette and then it dawned on me that there had been a forest fire. They were black with charcoal! 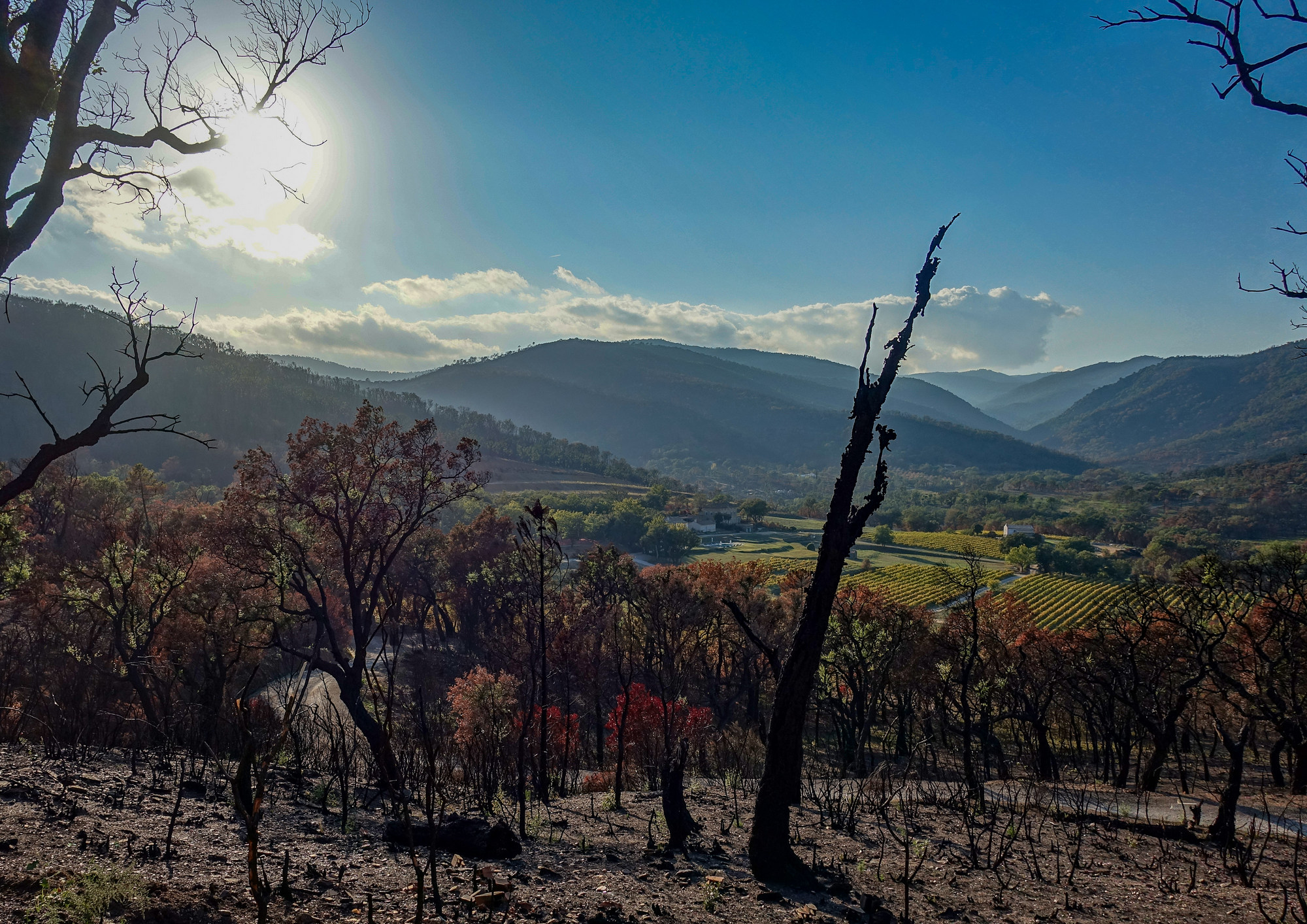 Shortly after that, I saw a monument paying tribute to firefighters who had died trying to tackle the blaze. 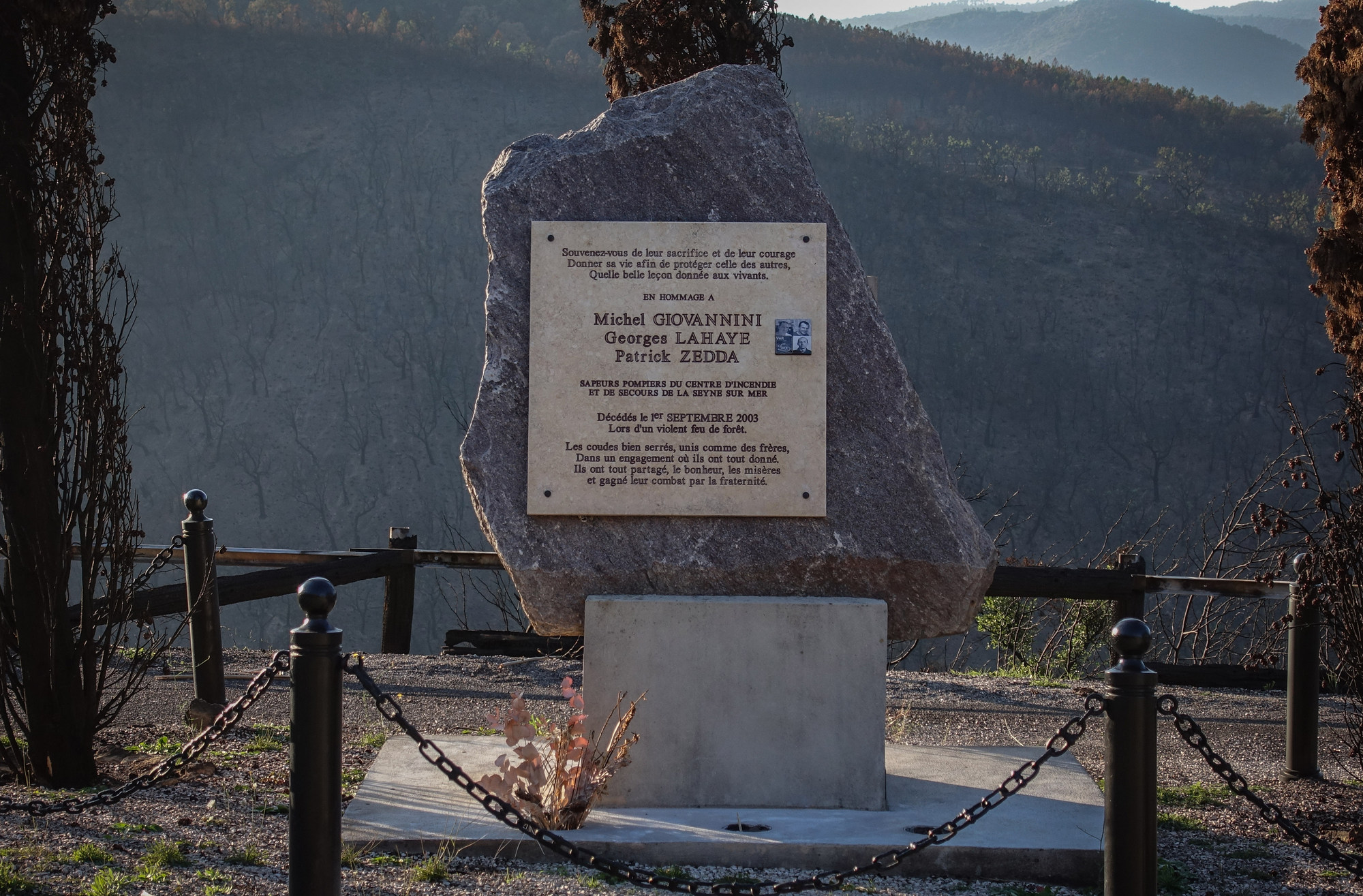 It said they had died in September 2003. Surely the trees would have grown back in 18 years! I thought to myself.

I found it frustrating not knowing when the last climb would end so I looked on my phone  at the route on RideWithGPS and saw that it reached the col about 4 miles from the end. I also saw that there was a period of flat coming up so that was good. 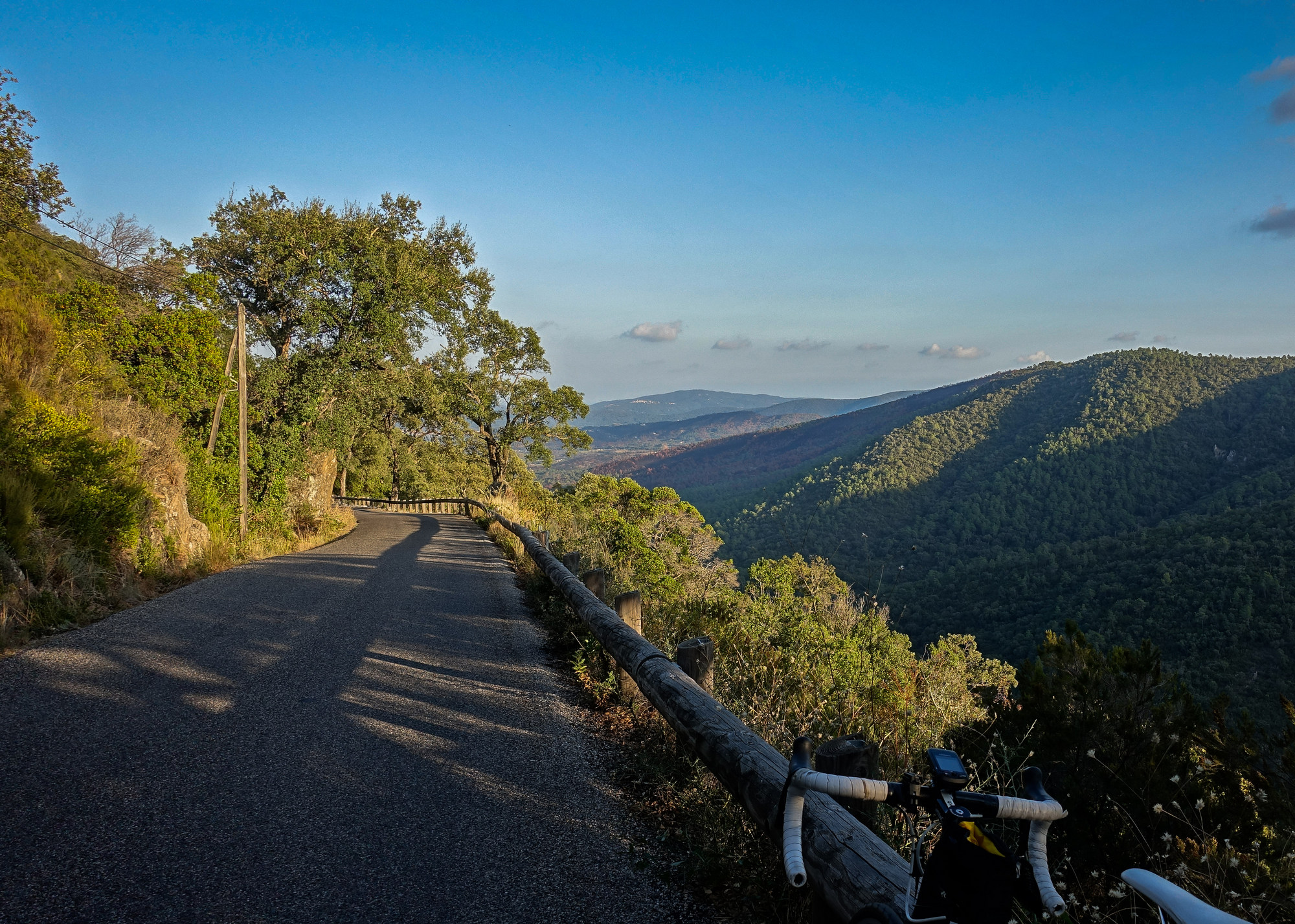 Twenty-five minutes later I had reached the col de Taillude 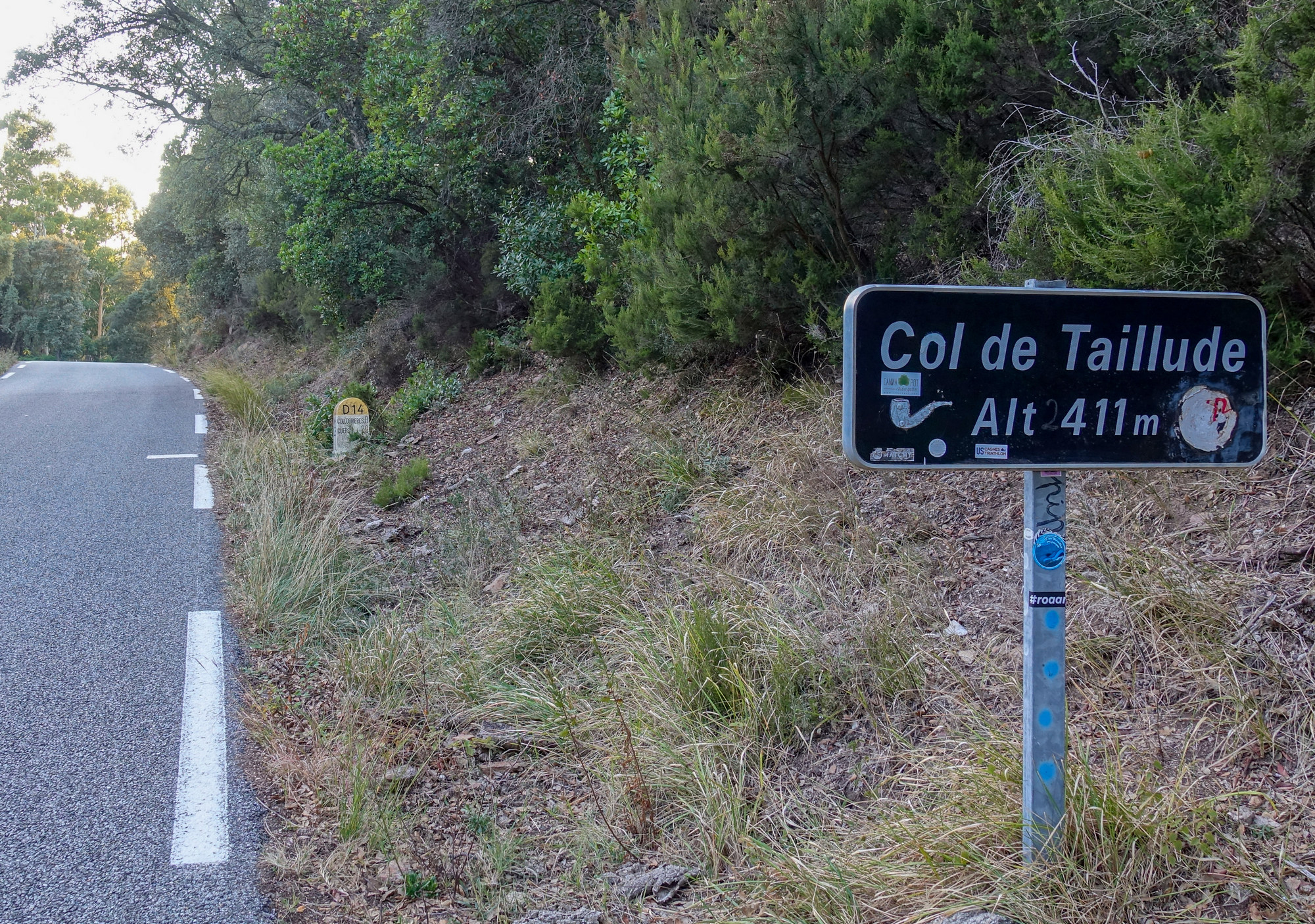 The sun had finally dropped behind the hills and the light was fading fast. I had my rear light flashing, although there was zero traffic. The ride ended after another five miles of wonderful downhill.

So it had been a lovely sunny, warm, late October ride through the beautiful scenery of le massif des Maures. While it was nice to see the seaside, it’s never that enjoyable riding along coast roads, from my experience at least.

I later discovered that there had been another terrible forest fire here just two months before my ride, on 16th August 2021. It was the biggest fire in France since the previous one here in 2003. So that explains why the trees looked so burnt.  More details here