As usual I checked the weather forecast first and saw there would be a northerly wind, so I thought I’d head North and have the wind behind me for the return. I searched through old routes and found one I’d created about a year ago but never ridden. It contained some off-road elements so I double-checked the route to see if it was actually feasible. With the aid of Google street view and satellite imagery, I found that some of the route was through industrial areas that would not be accessible. So I made a few mods:

The weather forecast was for sunny spells and a 60% chance of rain round about 1PM, so I took a rain jacket. I rode my Giant Defy, thinking that quite a bit of the ride would be on ‘unknown’ road surfaces, although I resisted an urge to fit mudguards. With the possibility of mud, I wore my old shoes. A wind-proof jacket and shorts completed the kit. I was warm enough in 11°C without a base-layer.

The ride started well at a good pace as I headed towards Mereworth and then on towards Wrotham village. 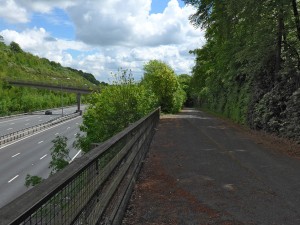 Just through the village there is a road that used to join the A20, before the M20 was built back in the 80’s. Now the road just ends in mid-air, about 50 feet above the motorway that was cut deeper than the old A20. A footbridge now links this road to the new A20 on the other side of the motorway, shown here. 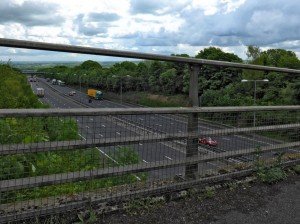 wandering off the line, it still feels ‘risky’ riding across these footbridges, even though there is virtually zero chance of ‘falling off’! It feels as if you are precariously balanced 50 or 60 feet above tons of fast-moving traffic.

Once over the bridge, I cycled up the (new) A20, then back down a road almost parallel to it.

Then I came to the first off-road part of this ride, in the form of concrete steps leading down to a footpath. The footpath led downhill almost to the side of the A20 again. Then my Garmin indicated that I should turn left. I looked to my left but could see no signs of a road. Then, a few yards further on, the trees cleared to reveal a track leading straight up the side of the hill. 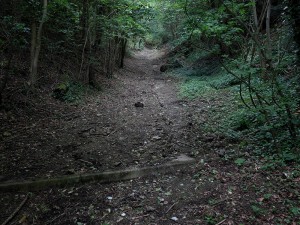 With what is probably a 30% or so gradient, with a loose rocky surface, there was no option but to walk up it! This track is marked on the map as “Labour-in-Vain Road”, a quite accurate description, except for the word “Road”!

Once I had reached the top, I tried to ride away but found that I couldn’t clip into my pedals because my cleats were caked in mud and clay! It took several attempts with twigs to clear my shoes of debris before I could be on my way again.

The route then formed a sort of loop via Fairseat, Vigo Hill and 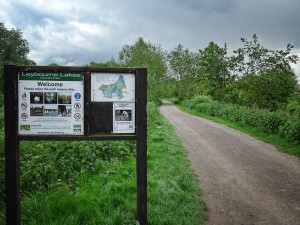 Trottiscliffe. It was during this that the 60%-chance-of-rain prediction kicked-in, bang on time! I donned my rain jacket. This kept my top half dry but I was reminded that, without mudguards, your feet get soaked by the rain splashing back off the underside of the down tube! The rain lasted for about another half an hour, by which time I was at Snodland, where I was about to embark on another off-road jaunt as I entered Leybourne Lakes Country Park. The surface here was gravel but pretty smooth.

About a mile and a half later I left the Country Park and had to get down some steps to access a footpath that ran along the back of Aylesford Newsprint, 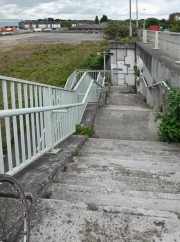 the largest paper recycling factory in Europe, and quite a significant landmark around these parts by virtue of its tall smoke-billowing chimneys. 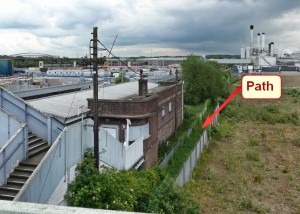 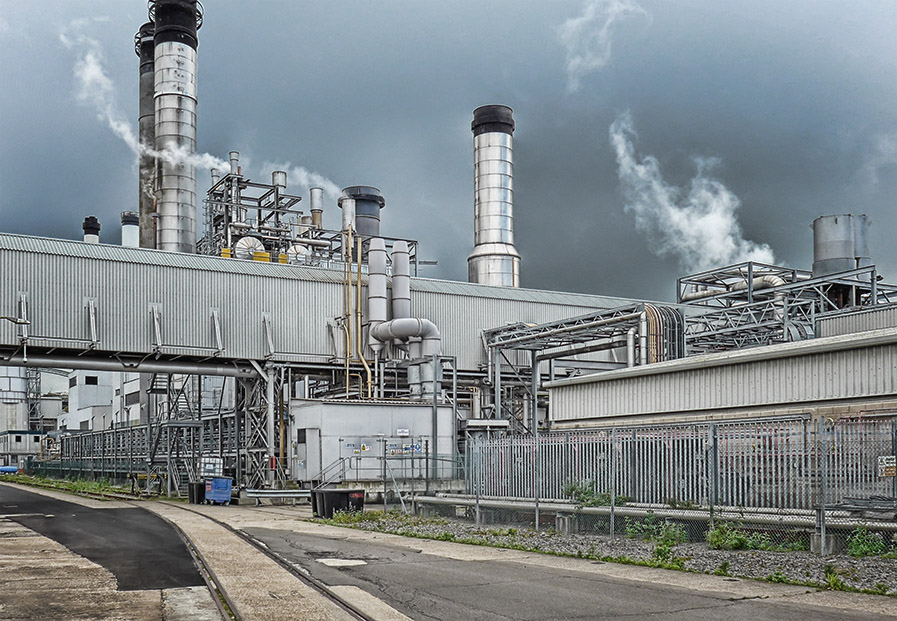 During my ride past the factory I was aware of some really weird smells,

like nothing I had ever known, no doubt connected to the processes going on there. About a mile later I joined another path alongside the river Medway. This path, often veering perilously close to the riverbank, was tricky to ride on because of lots of exposed tree roots. It eventually led me all the way to Aylesford.

Just the other side of Aylesford, I went off-road again, using the Medway Valley Walk which consisted at first of a very narrow, almost completely overgrown path

, along which my legs were stung and lashed by stinging nettles and brambles. This path is “Stingy Fly Alley” according to the map! There certainly were lots of flies around but they didn’t attack.  By now the sun was out and I had virtually dried off from the previous soaking. 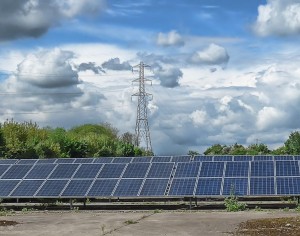 This was really the back of beyond. Parts of it were very peaceful and I felt I was the only person for miles. The path changed character several times opening out onto a concrete path that passed close to the Medway again. I passed sewage works, gravel pits and power stations, including a 1.2MW ‘solarstation’. 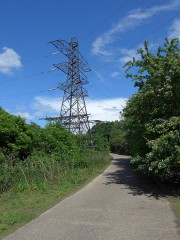 At one point I slowed down to stop and get a photo but I couldn’t unclip my shoe from the pedal. No matter how hard I tried to twist my ankle it just wouldn’t budge. Luckily I could pull up and lean on a fence-post while I investigated what was wrong. I found that if I twisted my foot the ‘wrong way’ it would come out, but this was really tricky to do. I was thankful that this hadn’t happened later in the journey while on a main road, because I definitely would have crashed to the ground in the absence of something to lean on!

Almost four miles later I re-entered civilisation as I reached the village of Wouldham. As I rode through there I was trying to think of a joke involving a play-on-words using that name. But I couldn’t….

A lovely open road led from Wouldham to the Medway Bridge. From there I followed roads and paths along the river from Borstall and into Rochester.

I had never seen Rochester Castle up close before and I must admit I was very impressed. It’s a quite imposing structure. The whole area around the castle is full of character with cobbled streets and well-kept parks. 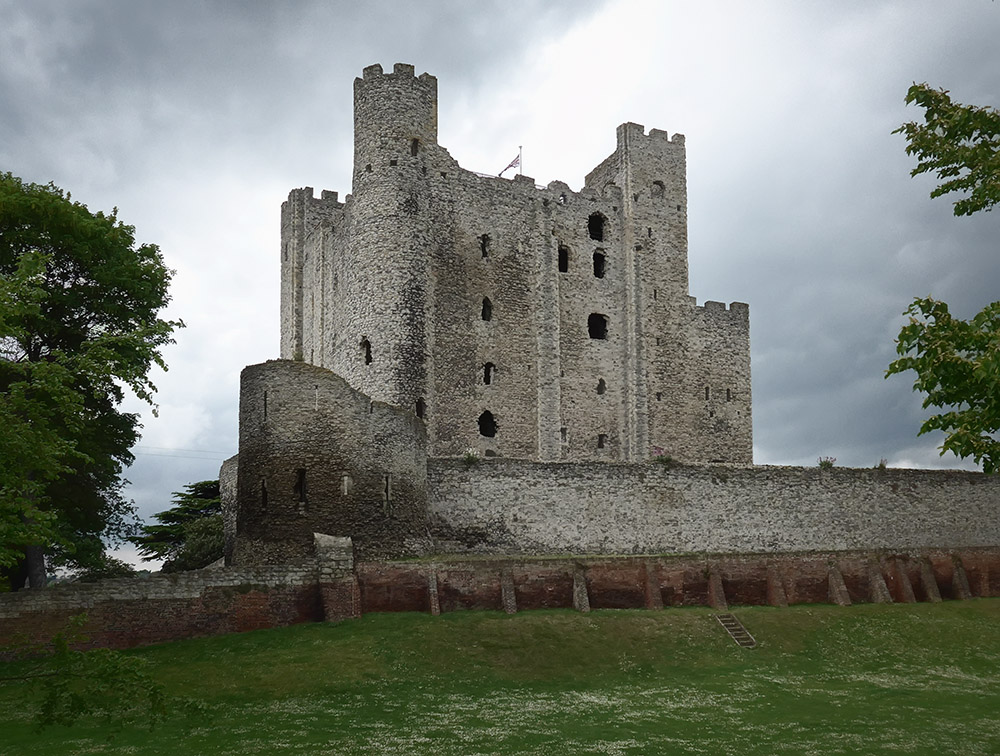 As can be seen in the photos, the sky was darkening ominously by now. My route took me through Rochester and Chatham and up to Waldeslade, at which point it started raining. So it was back on with the rain jacket. From this point on the rain just got progressively heavier.

The last 13 miles of this journey can be described best as a cold, wet and dull (light-wise) slog through an ever-increasing volume of rush-hour traffic. Apart from the top of my body, I was drenched! At one point I kept getting salty-tasting water running into my mouth. I kept spitting it out. I couldn’t think what it was but I knew I didn’t want it in my mouth! Later, after the ride, I worked out that it was…
[Warning: TMI follows!]
…salt that had accumulated in the padding of my helmet from my sweat over the past year’s worth of riding being washed out by the rain! [It reminded me of a time back in the 90’s when I got drenched cycling to work in London; during the torrential cloudburst my carbon mask got soaked, which resulted in my getting a mouthful of what was probably 6 months-worth of London traffic pollution in one concentrated drink! Needless to say I ripped off the mask and spat out the foul-tasting cocktail!]

I eventually arrived home, soaking wet. At least for those last 12 miles I’d had to keep me going!

If you are out riding in bad weather, it means you are a badass. Period.

Fair-weather riding is a luxury reserved for Sunday afternoons and wide boulevards. Those who ride in foul weather – be it cold, wet, or inordinately hot – are members of a special club of riders who, on the morning of a big ride, pull back the curtain to check the weather and, upon seeing rain falling from the skies, allow a wry smile to spread across their face. This is a rider who loves the work.