I reversed my original design of this route to take advantage of a SW’ly wind along the coast. I set off at 7:30, half an hour later than I had planned. It was overcast nearly all day which I hadn’t been expecting. The ride to the coast was into a headwind, which I had been expecting, and I ran into rain around about Polegate, which I hadn’t been expecting! As I entered Polegate I could see the hills of the South Downs dominating the horizon, but they were barely visible through the misty rain that was obviously shrouding them. When I reached them, the rain was enough to get me a bit soggy. It didn’t really reach the point where I needed to stop. I was pleased to find out that on the other side of the hills it was relatively dry, and I had almost dried out by the time I reached the café at Birling Gap.

Because of the headwind and rain and overcast coolness, it wasn’t that enjoyable a ride there, although the roads were great – it’s a good route. At the café there wasn’t much available. In fact it’s not a real café – it’s more like a tea room, I suppose, attached to the shop that is run by The National Trust. I had a sausage roll and a piece of flapjack. 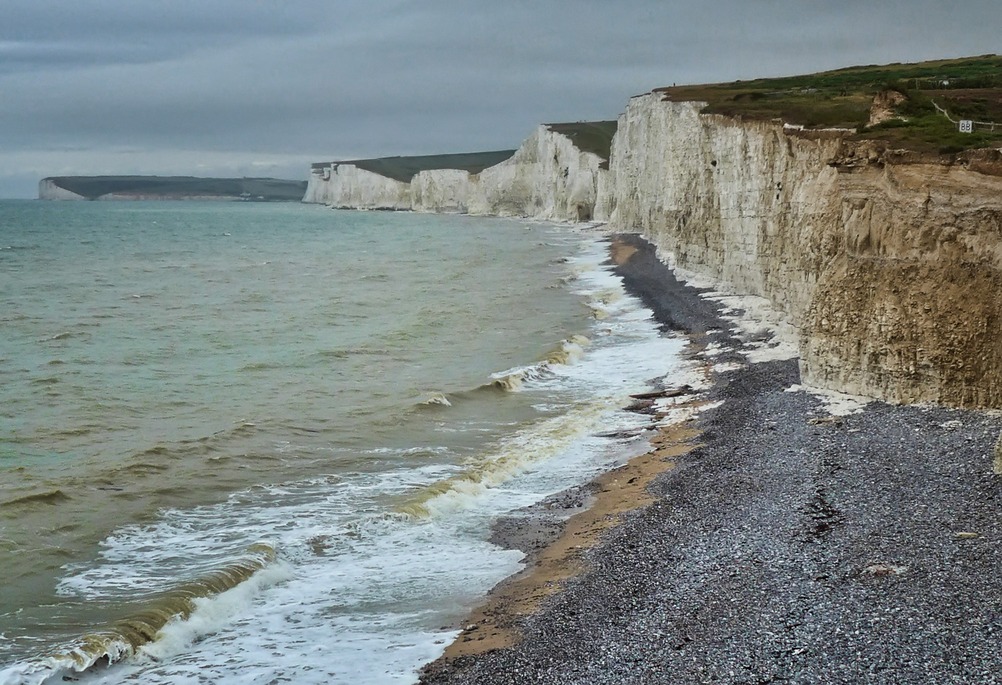 I was looking forward to the next bit of the ride as I knew the strong wind would be behind me. Also it would be on roads I had never cycled on. The road out of Birling Gap climbs gradually across the barren headland that is Beachy Head. It’s a great-looking road as it unwinds into the distance. I kept looking behind me to see if there was a photo opportunity to get the whole road in all its glory, but nothing grabbed me. Maybe on a sunny day I would have felt more inclined to stop. Soon there was a view over Eastbourne and then the road plunged down into the town. 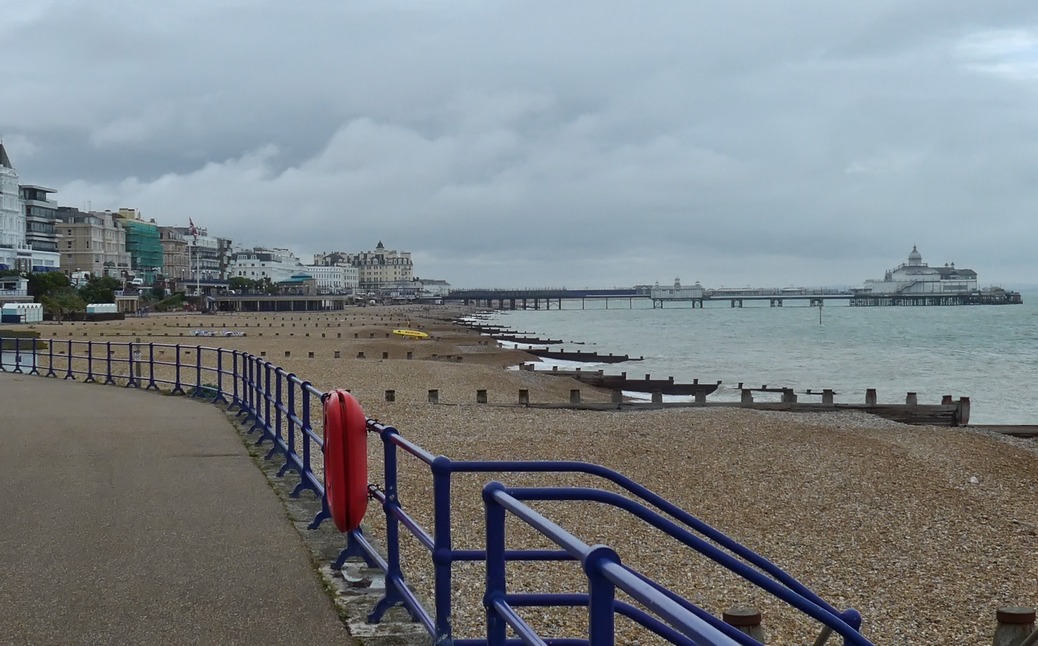 My intention had been to ride along the edge of the beach, but I saw several ‘no cycling’ signs, including one that warned of a hefty fine (£500, I think). I concluded that Eastbourne wasn’t very cyclist-friendly so I just stuck to the road. Maybe the weather didn’t help, but I found Eastbourne a dull place with no redeeming features I could spot. At the east end of the town, towards Pevensey Bay, I rode through Sovereign Harbour, a modern marina consisting of four separate docks linked by bridges. I got held up at a raised bridge for ten minutes – nobody seemed to know why it was stuck open for so long. 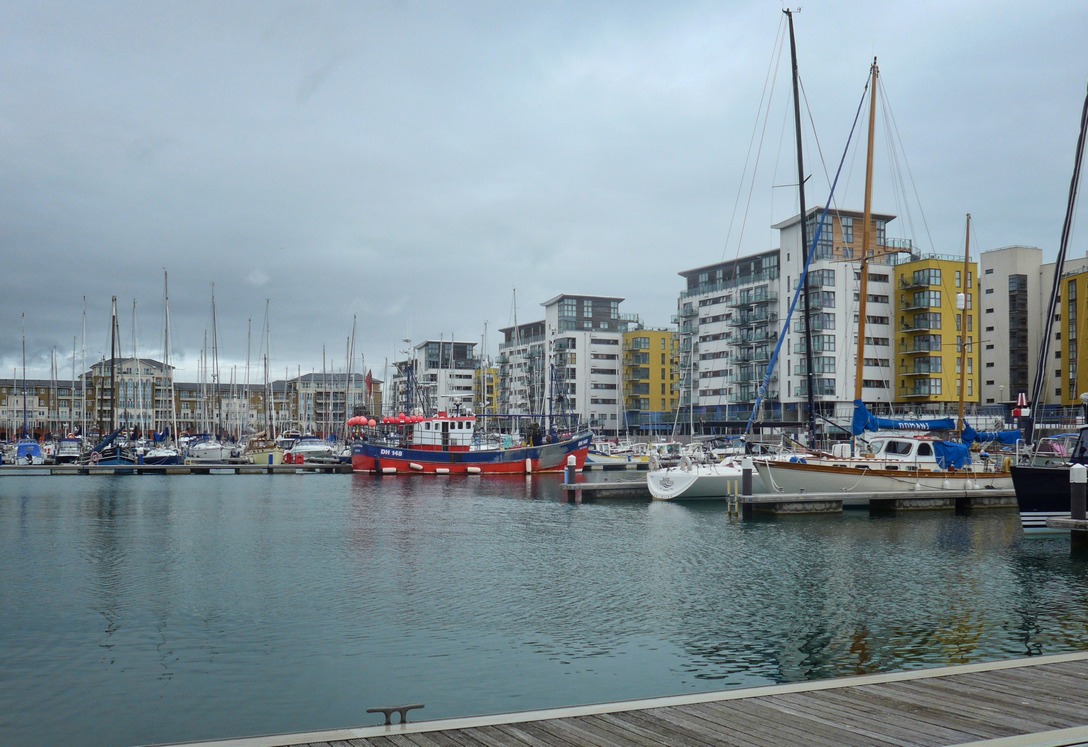 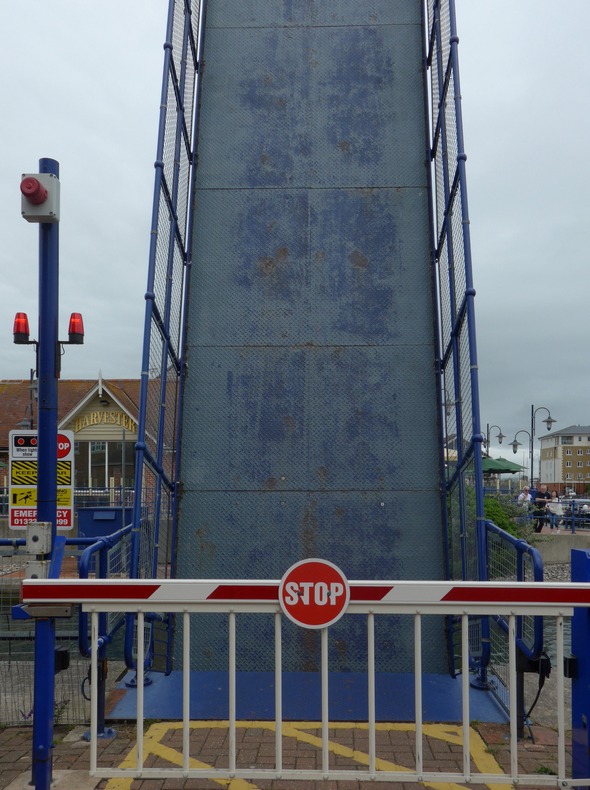 Once I had escaped from the marina the road followed the coast through Pevensey Bay and on to Normans Bay. For several miles I kept seeing ‘straw people’ by the side of the road. I don’t know what the significance of these was. 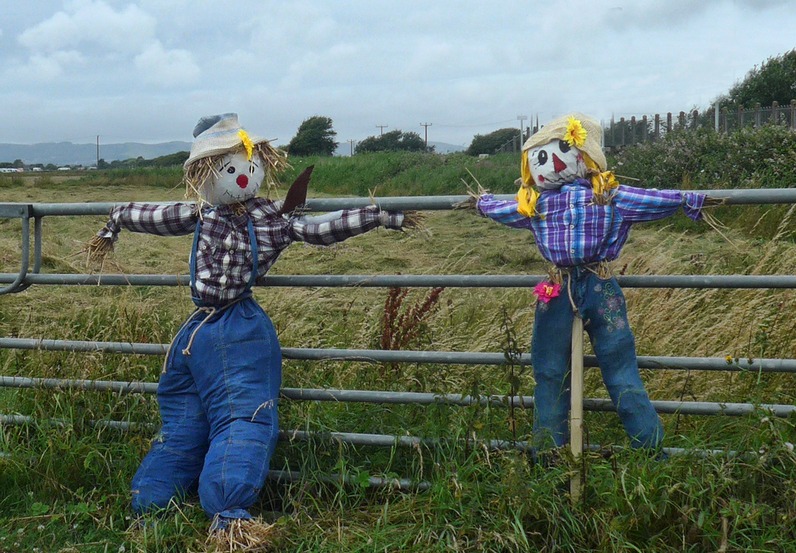 The road carried on to Bexhill, the host of some truly awful-looking 60’s-style blocks of flats, completely out of keeping in a seaside town. The route turned onto a path that ran between the sea and a railway track. 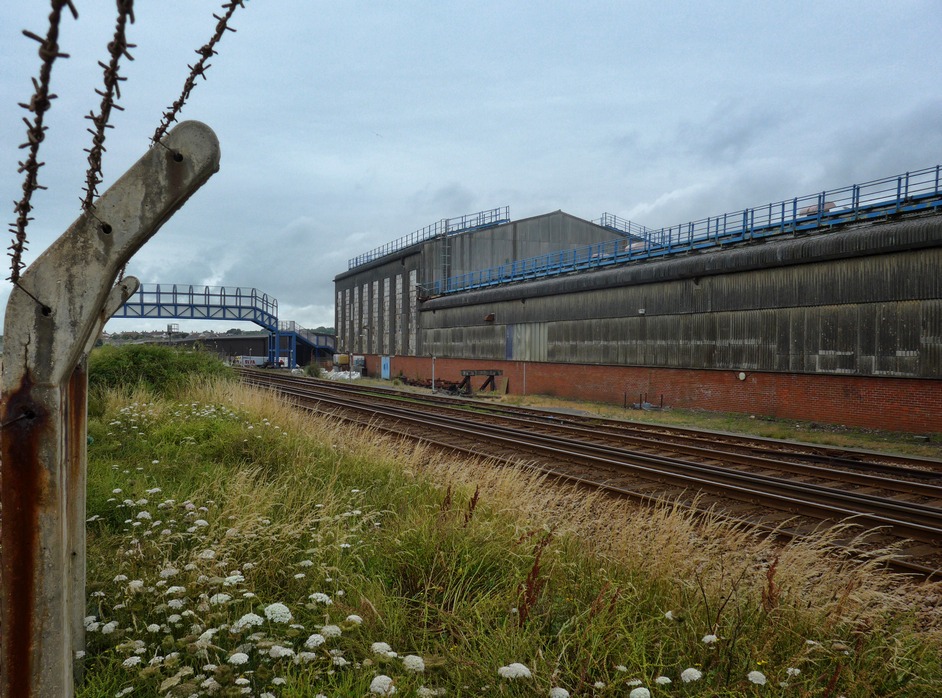 The surface was a sort of metal grid. 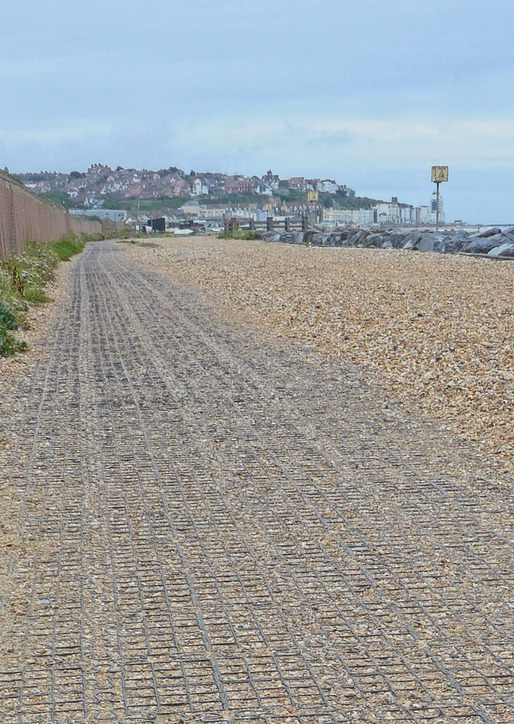 The path led to Hastings. At last, a place with some character and interesting buildings. Also, it was very cycle-friendly and I stayed on the path by the beach for two miles through the town. I climbed out of Hastings on the East side using All Saint’s Street, a narrow, characterful street which was blocked by a lorry and lots of other vehicles all trying to get through. It was so narrow even my bike wouldn’t fit past the cars, so I used the very narrow pavement. It reminded me of a scene that you’d be more likely to see in somewhere like Paris.

I missed my next turn and ended up riding up an unmade road which eventually led to Barley Lane, a lovely road that climbed up past Hastings Country Park to the hills above Fairlight from where there was an amazing view inland.

After stopping briefly to enjoy the view, I carried on, down Battery Hill, past Fairlight and on to Pett Level after which the road followed the coast. The sea wasn’t visible as the road was behind a sea defence ridge to my right, with the extremely flat ‘levels’ to my left. 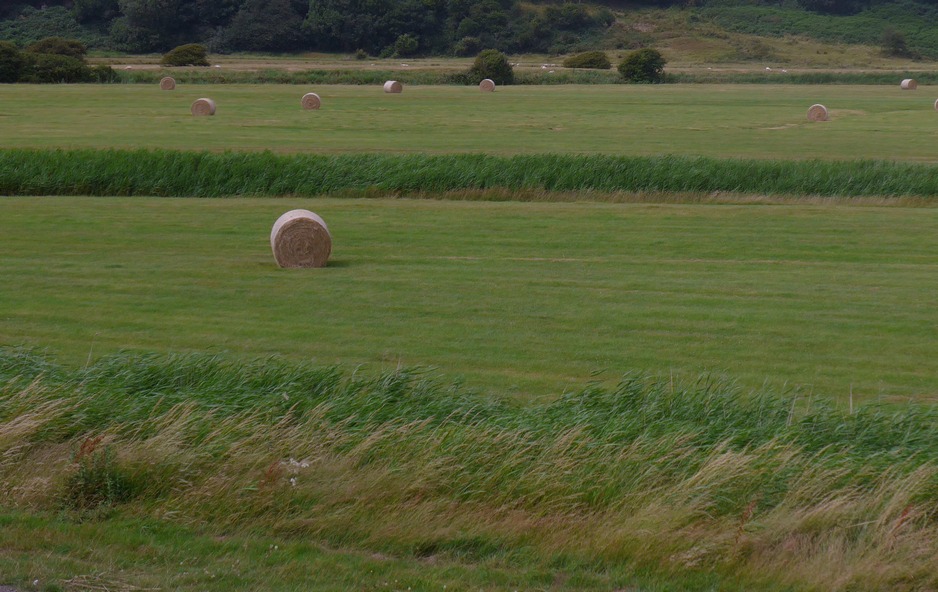 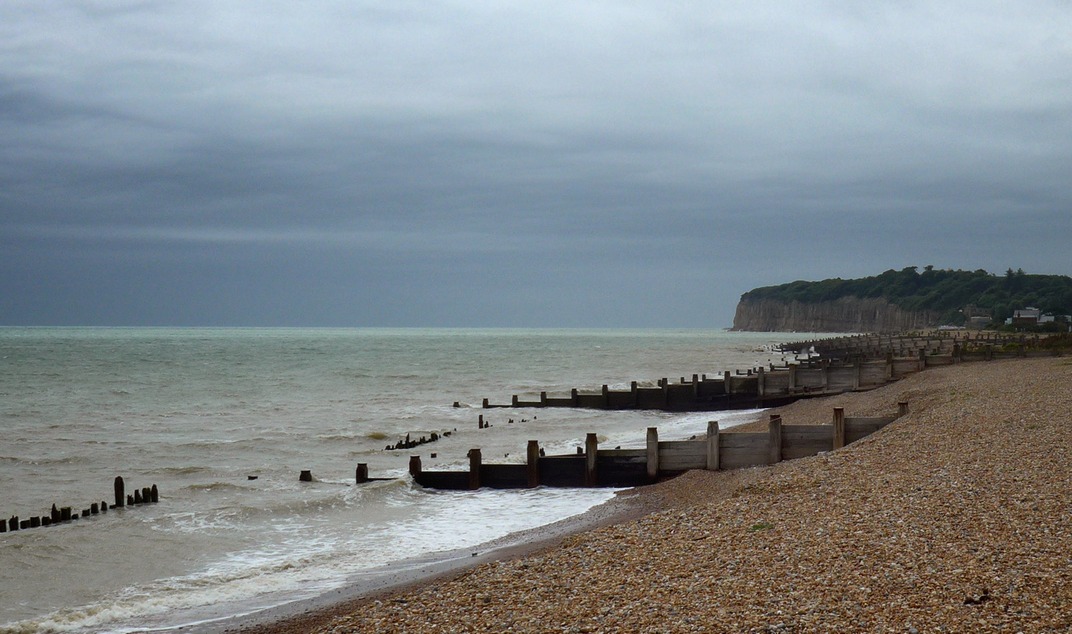 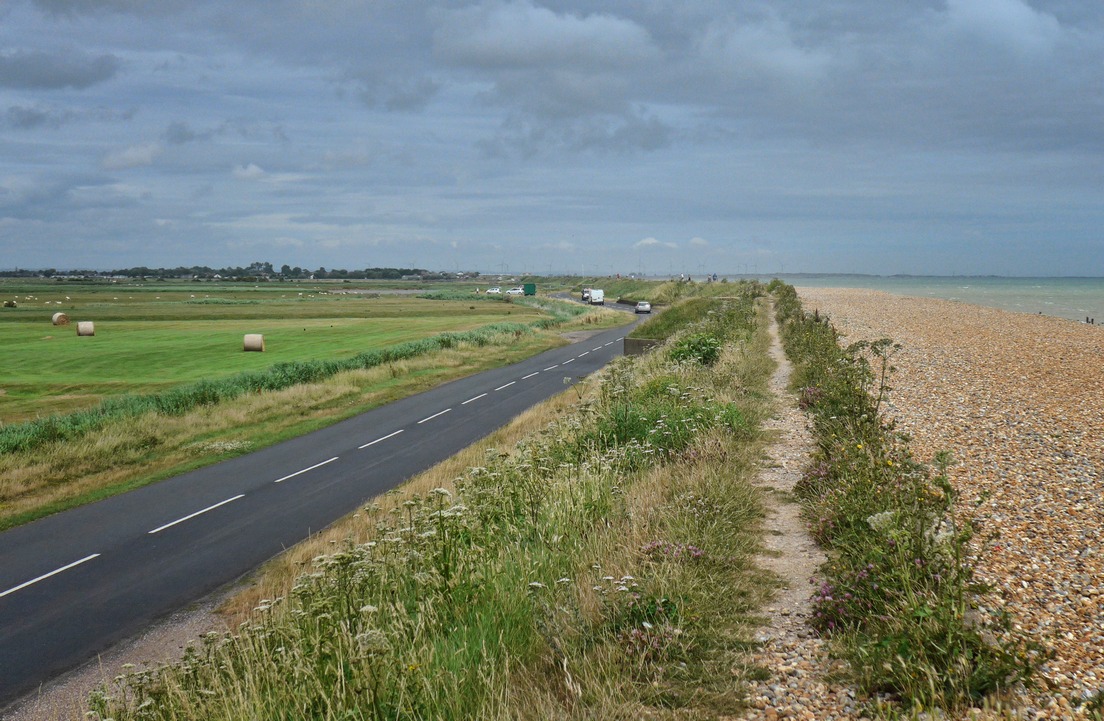 At Winchelsea, the road veered inland away from the sea, but I switched to a path that kept to the coast and onto the Rye Harbour Nature Reserve. The surface was perfectly smooth tarmac, and with the wind behind me (and nobody around) I averaged over 23 mph for the next couple of miles. I took a break at The Bosun’s Bite, a café that I have been to on club runs. I had the most delicious chocolate caramel shortbread that I have ever tasted. The chocolate was very thick and tasted superb! As I was sitting there I heard someone say that it had started raining again. That didn’t really bother me because Wichita Lineman had just come on the radio and I was lost in the moment there just for a while. Luckily the rain never amounted to much and had stopped by the time I left.

The last leg of the journey was the 35 miles home. It started with a wind-assisted blast down the Royal Military Canal Road all the way to Appledore. Thereafter, the wind was coming at me from the side but didn’t cause too much of a problem as I rode via the ‘enden’s – Tenterden, Biddenden and Frittenden. Yes, OK, one of those is an ‘erden’. Then via familiar roads through Staplehurst and Marden. Right up until the end the sun never managed to put in an appearance even though it had been threatening to all day.

An ass-saver, fashioned from a plastic milk bottle weighs next to nothing. Why not carry it all the time. Today I got wet from water spraying off the tyres. This would have prevented that!

Check the weather forecast for the destination

Don’t just check the local weather forecast and assume it will be the same 40 miles to the south by the coast.

Establish people can understand English before rattling away at them

When I stopped to take that panorama from Battery Hill above, there was another cyclist there who had stopped to admire the view. I said “Hi” and then immediately started rambling away at him. Something like “I kept seeing this view through the trees and it looked amazing so I thought I’d get a photo”. He looked at me a bit strangely and muttered something. I tried again with a re-phrasing. He still didn’t seem to get what I was saying. Maybe he had a learning difficulty or  something, I reasoned. After a while we established that he was German! (Well I’m sure that he already knew that!). I gestured towards the view and said “Wunderbar”. Then, with me speaking more slowly, we made some progress. Eventually I bid him farewell with a “Wiedersehen”.