I got up at the unprecedented hour of 04:30. I had hoped to leave at 5, but in the end left twenty five minutes later. While getting my bike sorted outside it had started to rain, just fine rain in the air. It was still pretty dark when I left. For the first part of the ride, I had several things going through my head. The first was an expletive-heavy ‘conversation’ with the weather man. I wouldn’t have fancied being in his shoes listening to my rant! The rest was all questions, such as “how wet will I let it get before I turn back?”, “how far should I go to ‘give the weather a chance’?”, “How waterproof is the Gomadic battery-backup for my Garmin?”, “Would my chamois cream lose its effectiveness if my shorts got wet?”etc. Most of these things I normally wouldn’t care about, but with a 200-mile ride ahead of me, anything might end up adversely affecting the whole day.

By the time I reached Tonbridge the roads were wet enough to cause water to be splashing off the tyres. I didn’t have mudguards and the ass-saver didn’t help much in these conditions. By Penshurst I was wet through, and proceeded to get wetter over the next hour. I was soaked to the skin and, worse, my feet were soaking wet. Still, the thought of turning back did not yet seem reasonable. “Maybe I’ll just ride to Brighton and return from there”, I thought.

Well, the rain did eventually ease-off. But obviously I remained quite wet, the worst aspect of which was my right foot refusing to get warm and just feeling like a cold, wet and numb thing on the end of my leg. I contemplated calling my brother who lives in Hastings to see if I could use a hair drier or something – I might call him from the café in Brighton, I thought. It was with a cold, wet right foot that I climbed Ditchling Beacon. This was my third time up it. It felt quite comfortable spinning steadily up there and when I analysed the data later I had done it over a minute quicker than my previous PB.

Five and a half miles of descent down Ditchling Road led me to the café ‘Velo’, situated in a park just to the side of the road. I had planned to stop every 50 miles or so; this was the first at 54.

Now that the rain had stopped I was happy to continue along the coast, reasoning that I could turn back home inland at any point really, if required.

Half an hour later I was on my way again. Along the sea-front eastwards through Saltdean, Peacehaven and Newhaven towards Seaford.

The majority of those twelve miles was on bike paths or back roads. Over the Cuckmere River and past the Seven Sisters Country Park the road climbed up onto the South Downs and then down towards Birling Gap, where I found myself on familiar roads. During the three-mile climb to the top of Beachy Head I stopped to have an energy bar and look over the cliff edge. There was a group of youngsters playing with a football and a frisbee, perilously close to the 160-feet drop. Just watching them was scary!

By now my right foot had warmed up. It was still wet but I only knew that from poking a finger down the side of my shoe. If my feet are warm it doesn’t matter if they’re wet – it’s like a wetsuit I guess. So I was feeling comfortable and any thoughts of ending the ride early had all but vanished. The next section followed pretty much the same route as my Beachy Head to Rye ride of a few weeks ago.

Just after Eastbourne it started raining again. Nothing much, and it eased off, but for the whole of the rest of the ride there were spots of rain in the air. My next stop was at the Bosun’s Bite café in Rye Harbour. I ordered a sausage sandwich, a coffee and a chocolate caramel shortbread slice. When the sandwich arrived it was a huge doorstep, more than I’d been hoping for really. It was nice though. 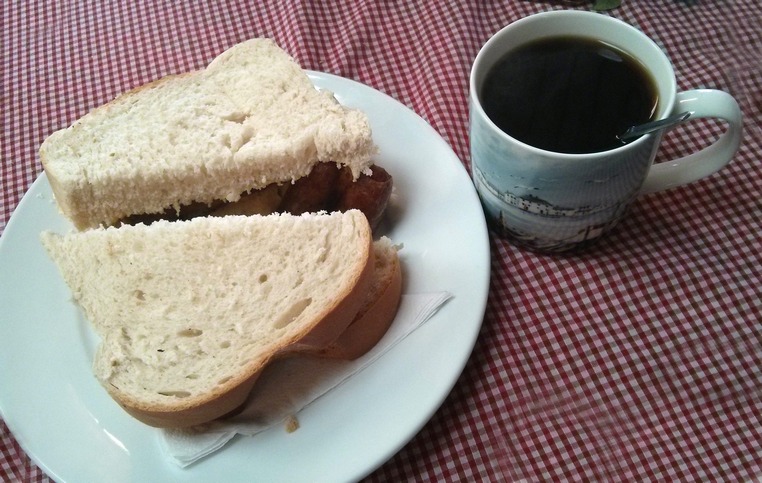 I had now covered 108 miles, more than half way. The good thing about this route is that there are loads of significant places to mark your progress. “When I get to Dymchurch, I’ll nearly be at Hythe. And when I get to Hythe I’ll be right next to Folkestone. Once I reach Folkestone I will nearly be at Dover…” and so on, went the countdown in my head. It really helps to motivate you for the journey ahead when it can be counted-off in small steps like this. And it’s amazing how quickly they go by. Before I knew it, 30 miles later, I was in Folkestone climbing the long 10% ascent of Dover Hill. This was followed by a very welcome six-mile descent into Dover. I normally go by the cliff path, but decided to use the road this time.

After climbing the steep roads by Dover Castle, I made my way to St Margaret’s at Cliffe, this time passing through a really attractive part of the village I’d never seen before. Again eschewing my normal cliff-top path route, I used National Cycle Route One to lead me through hilly fields on a smooth tarmac path down to the seafront at Oldstairs Bay. At one point I saw a sign to Deal, 2 miles; there was no question of my not completing the whole ride now. Deal was where my route changed direction to head inland in the direction of home, with the advantage today of an easterly tailwind to help me, the same wind that had been gently against me for the previous 100 miles. I had planned to stop somewhere in Deal, but the café on the beach I had ear-marked was closed. I got my bidon topped up at a fish and chip shop but continued on without properly stopping.

As on previous rides, although on a slightly different route this time, the roads between Sandwich and Chilham are particularly attractive, winding their way into the distance across huge gently rolling fields. For the previous hour or so there had been a watery sun trying to make itself known. Now low in the sky, it helped create an amazing contrast between the darkening sky and the bright straw-coloured fields of barley. 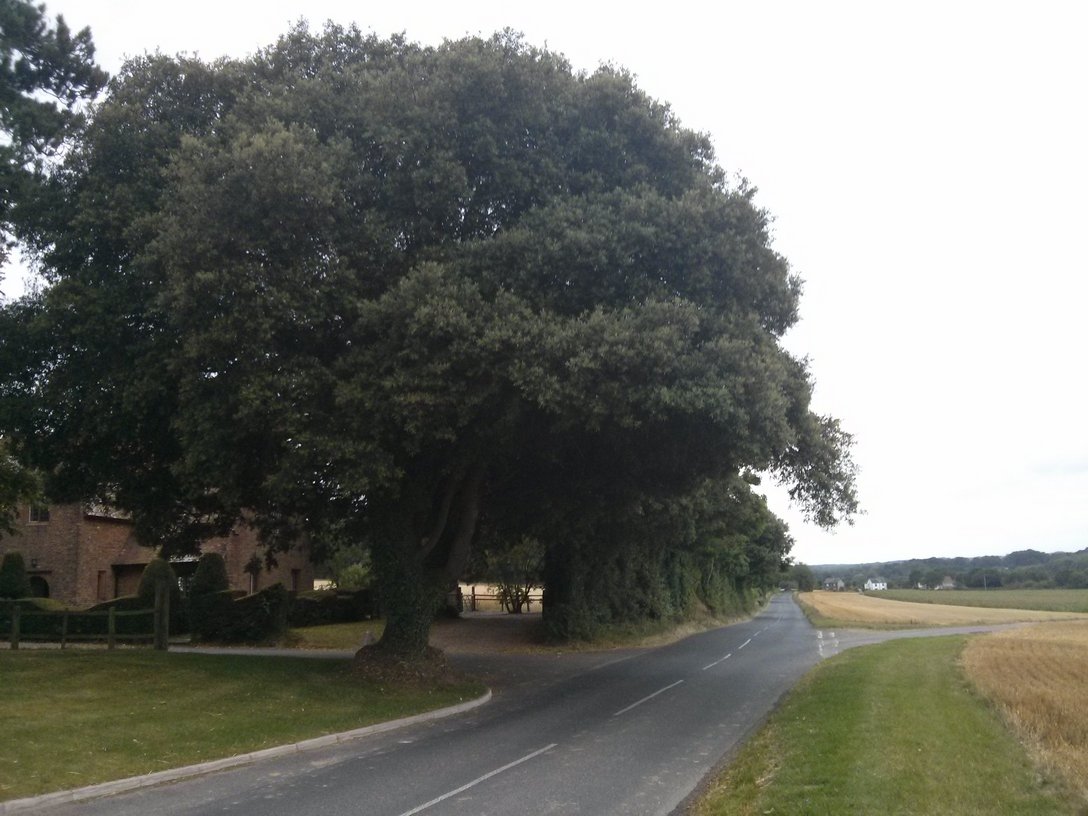 The miles were going by quite quickly with places like Bridge and Chilham coming up sooner than expected. Instead of sticking to my planned route on country lanes, I decided to use the main roads towards Charing and the A20; it would take less concentration. During this section it started raining again; enough for me to put my rain jacket back on. It was almost dark now. I pushed on, getting quite low on juice; that’s juice as in liquid, not energy, although the latter was inevitably beginning to fade. The rain didn’t last long and continued as just odd spots for the remainder of the journey. The thirteen-mile stretch between Lenham and home passed more quickly than I had been expecting. I arrived home feeling pretty good really. The thing that hurt the most was my wrists, seemingly still not having recovered fully from when I came off my bike back in May. I had plenty to drink after I got in. For the last 50 miles or so of the ride I had been dreaming of a cup of tea and a beer (not at the same time!) – so that’s what I had.

I’m glad that I had not let the rain beat me.

Restart timer if Garmin crashes
Very rarely (although twice on this ride) my Garmin will briefly freeze and then shut down. The good news is that it always ‘remembers’ what was happening before it crashed, so after power-up it still has all data for your current ride and knows that you are following a course training activity. So the only thing to do is to always: REMEMBER TO RESTART THE TIMER! I didn’t restart it when it crashed on this ride but luckily I remembered just four miles later. It still meant I had to rebuild the TCX file using data from a previous ride for the missed section.