The main aim of this ride was to do a repeat of my last ride but without stopping all the time to take photos! I re-designed the route slightly to take in Sandwich Nature Reserve and to ride over the White Cliffs of Dover (not literally!), keeping closer to the sea than I had last time. Access to Sandwich Bay is via a toll road (free for cyclists) – which intrigued me. I have always celebrated the fact that UK beaches are freely accessible to the public, so why the toll?

It was a sunny and warm start to the day, so I didn’t wear arm-warmers. I set off later than hoped for and I suddenly realised that I might not make it to my favourite café in Dymchurch before they closed. That thought helped me progress at a good rate! Shortly into the ride I was into mist again and it lasted all the way to the coast. I stuck to my plan by not stopping for photos, etc. My first stop was after 38 miles when I paused briefly at Wingham to eat a banana. From there it was only another five miles to Sandwich, which I reached with 16.2 mph average showing on the Garmin for the ride so far.

So I rode past the toll booth, half expecting some jobsworth to say something. I was into the mysterious private estate. It was marshland and as I said, very misty, and eerily devoid of any signs of (human) life. When I reached the shore, the beach was empty in both directions for as far as the eye could see, which wasn’t very far!

Further up that road, I climbed a gate as the route stuck to the shoreline and the ‘path’ became predominantly pebbles with the odd tuft of grass here and there. I persevered for 50m before I gave up; it was impossible to ride on and I had no idea of the extent of the pebbly section. It’s one of the only times where I have actually turned back because of a tricky terrain. I turned inland and rode across the marsh on a really rough track which eventually led to a road. Two miles later I was back by the seashore at the north end of Deal.

From now on I would be riding essentially the same route as on Wednesday, so I didn’t think there would be any need to take photos. Still in Deal, I stopped at the Café on the Green for a sausage sandwich and a coffee. Fifteen minutes later I was up on the cliffs again, past the golf club. It was so  misty that I couldn’t resist getting a photo.

Approaching the Dover Patrol Memorial this time was completely different to last time, so another photo was in order: 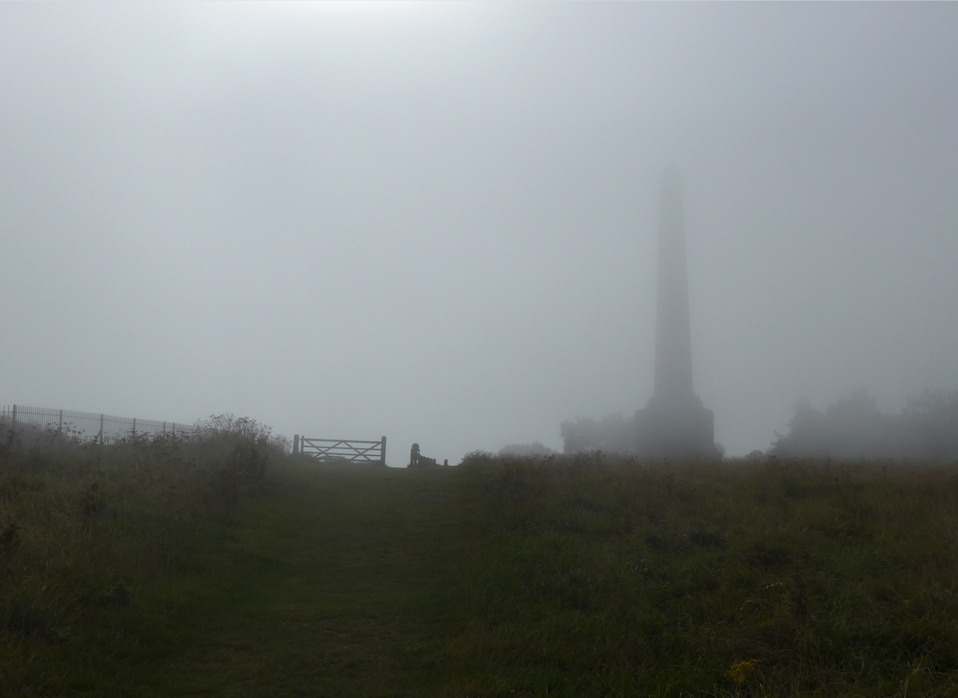 Through St. Margaret’s Bay again, this time I didn’t turn inland but kept close to the sea as I entered the National Trust area above The White Cliffs of Dover. The mist suddenly cleared. This photo of the lighthouse was taken just thirteen minutes after the one above.

Even though it was clear up on the cliff-top, the sea was still shrouded with a thick fog, which made it quite eerie. Looking over the edge I could hear the faint muffled sound of the sea far below but it was impossible to see through the white blanket that covered it.

So evocative were the misty views that the ‘no-photos’ plan went straight out the window and I ended stopping even more than last time! The sights were just amazing and I have done my best to illustrate them here, but a computer/phone screen can offer nothing like the real sensation of being there. 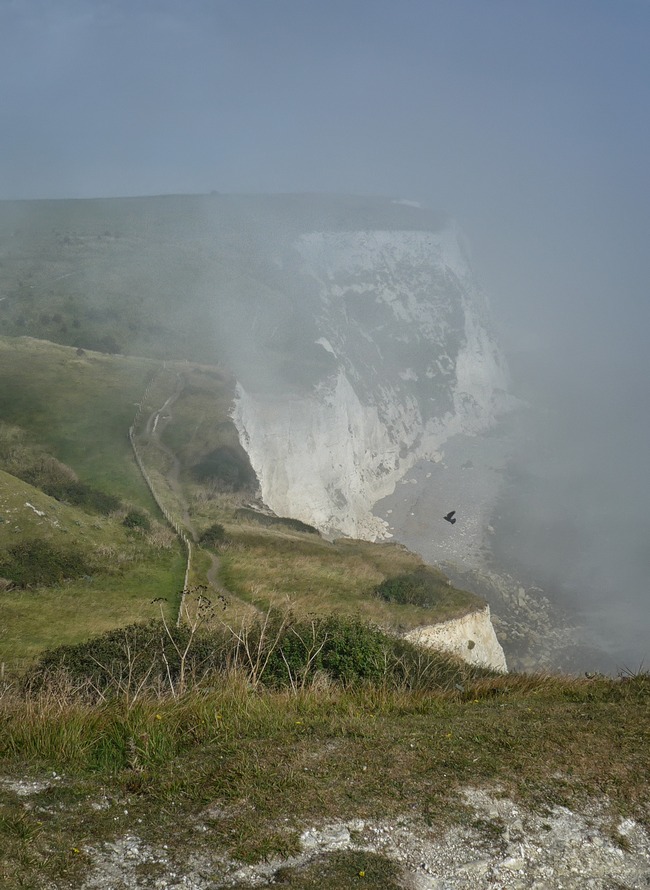 As I approached Dover, still 300 ft above sea level, I could hear the mechanical sounds coming from the port. There was a regular loud beeping sound, and some messages coming over a P.A., punctuated periodically by the thunderous boom of a ship’s fog horn as it cautiously approached the docks. I couldn’t see any of this activity, only hear it through the fog. At this point there seemed to be a myriad of paths across the cliffs and I couldn’t really tell which one I was supposed to be on. I decided to just stick to the one close to the edge. I was stopping virtually every ten metres or so to take in the spectacle of the landscape. 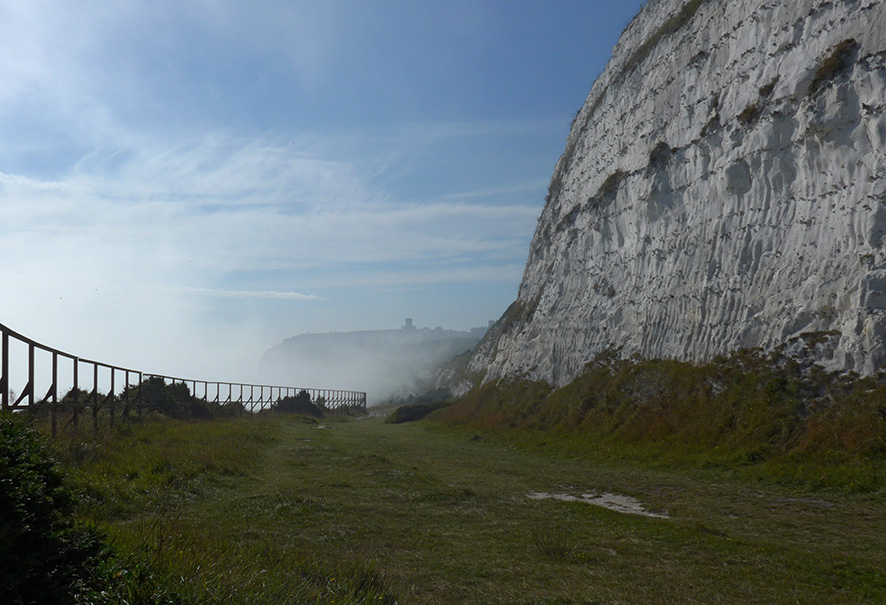 Soon I was right above the port and could see all the activity down there: By now I realised that I had probably taken a wrong turn somewhere and I should have been on top of the cliffs to my right. But I pushed on ahead and eventually I saw a way of getting up there, but I didn’t like the look of it: 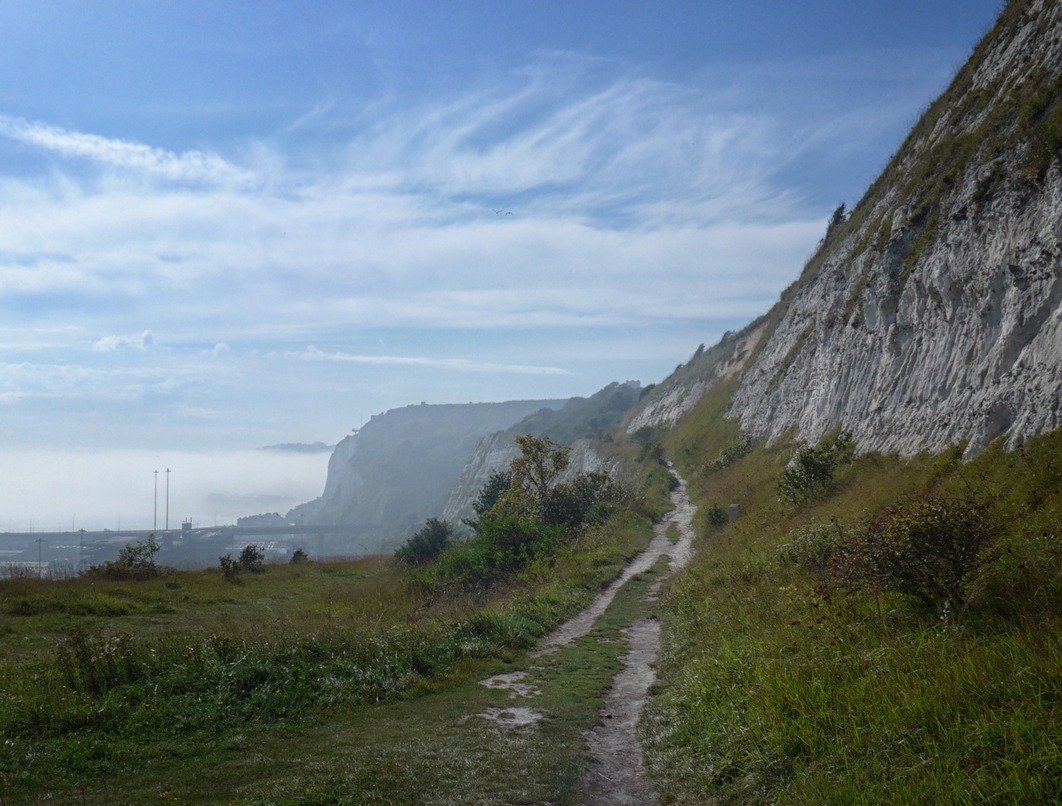 A narrow path clung to the edge of the cliff as it rose to the higher ground. There was no way I was going to ride up it, so I walked my bike. At points, the path got so narrow I had to push my bike in front of me.  I concentrated my focus on the actual path and tried to not look over the edge. 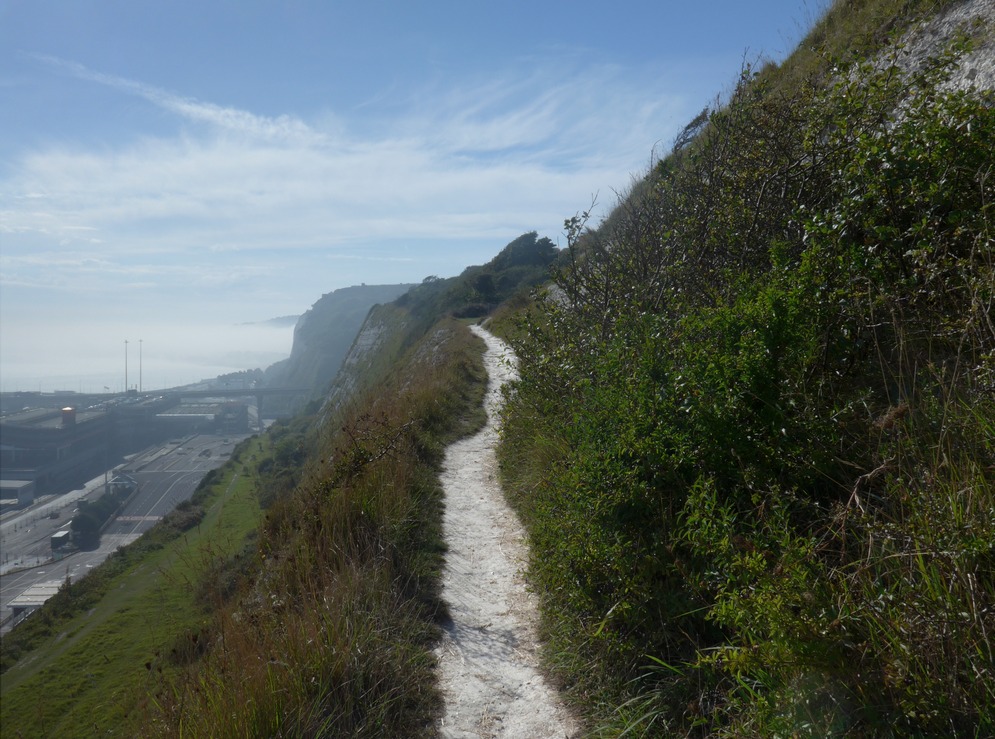 Eventually at the top the path turned ‘inland’. But my troubles were not over. I now had to descend down an ultra steep path that had a sort of polished chalk surface that offered zero grip for my cycling shoes. 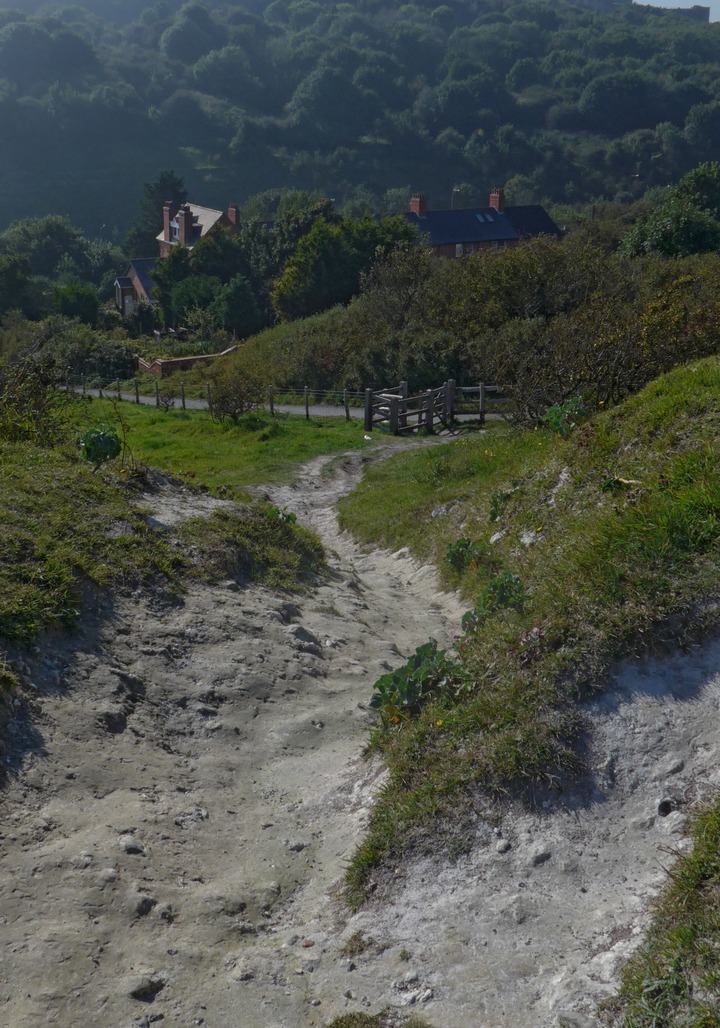 I stood at the top for several minutes trying to work out how to get down. In the end I had to go down on my bum, holding my bike with my right hand, struggling to prevent it rolling away from me down the steep hill, and grabbing clumps of grass with my left. Luckily there was nobody around to witness this ridiculous spectacle. Once through that gate in the photo, I could ride down a steep path from which I could get another view of the port:

The path turned to steps: 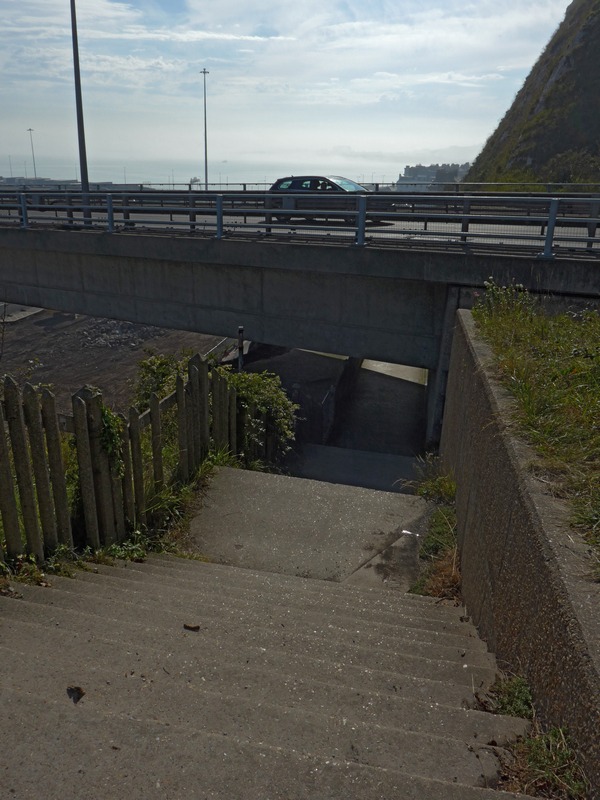 …which led under the bridge… 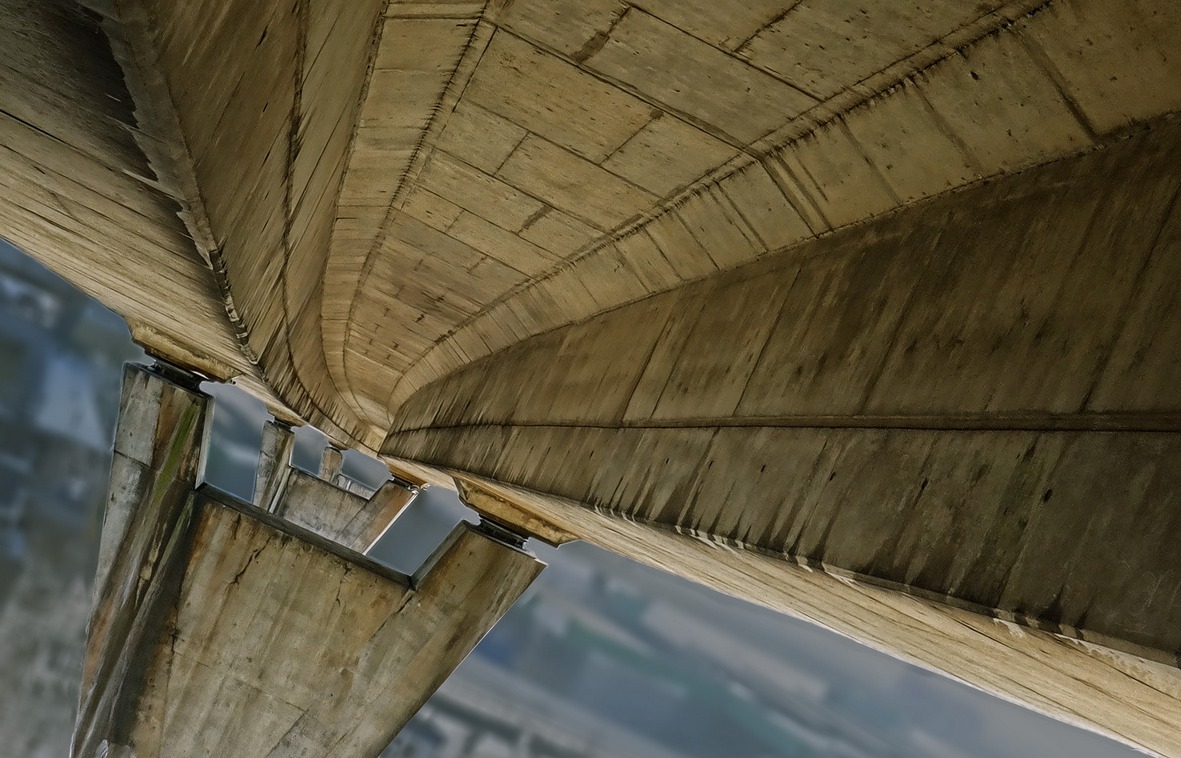 …and down to sea level 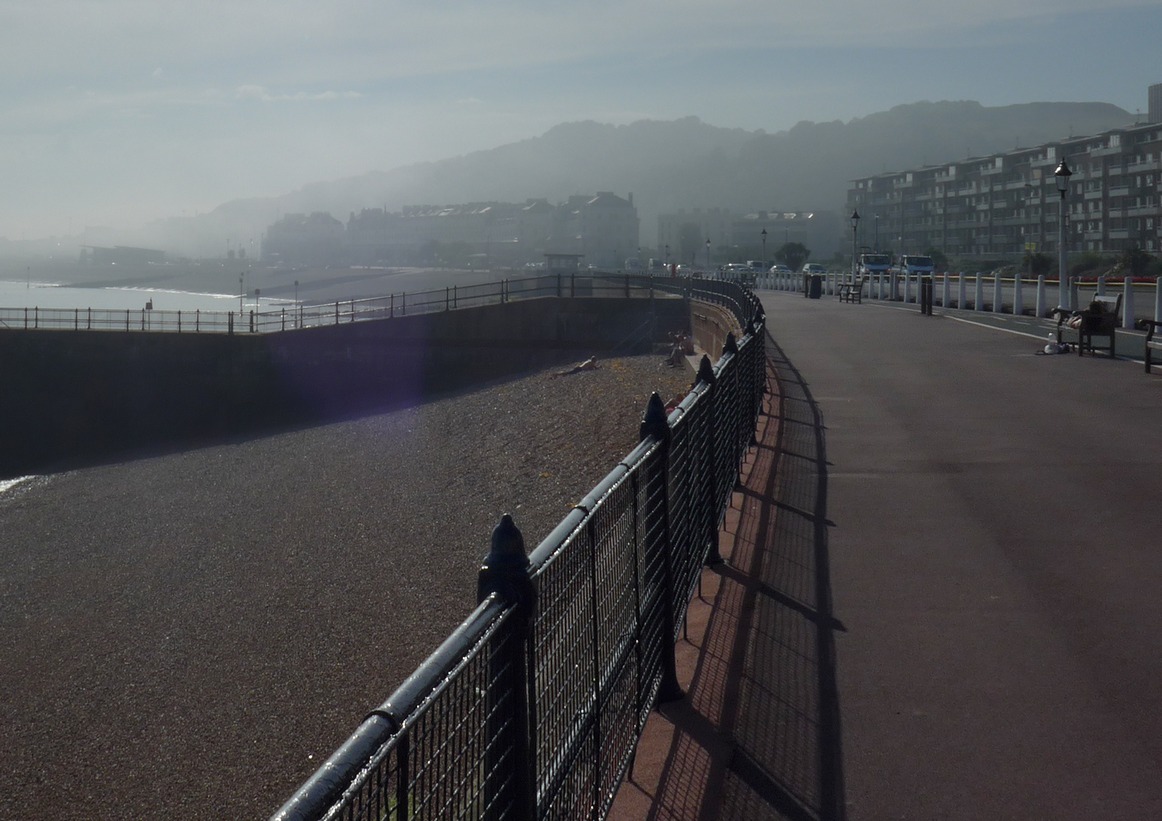 That was definitely not the best way to get down from the cliffs!

Once past the marina, I followed an overgrown path that ran alongside the busy A20… 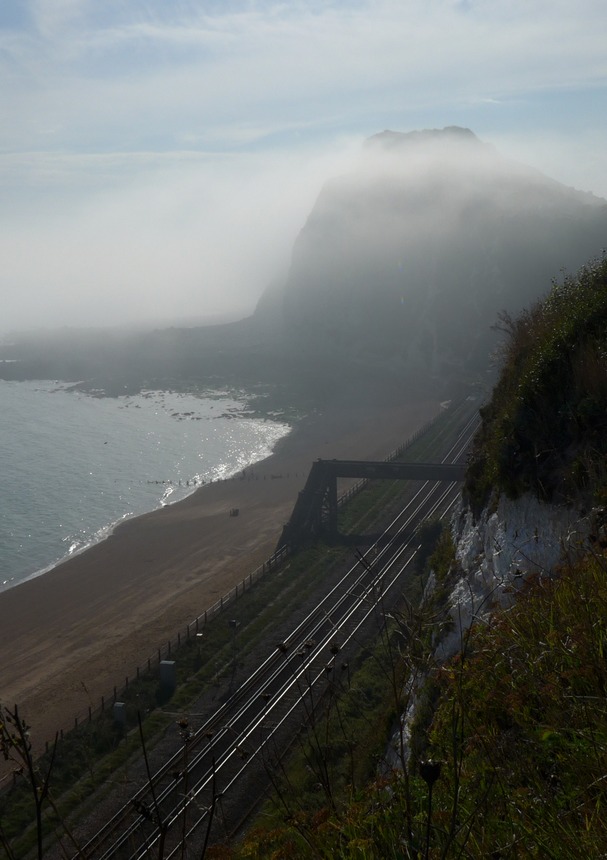 …and took me right past the entrance tunnel to Samphire Hoe… 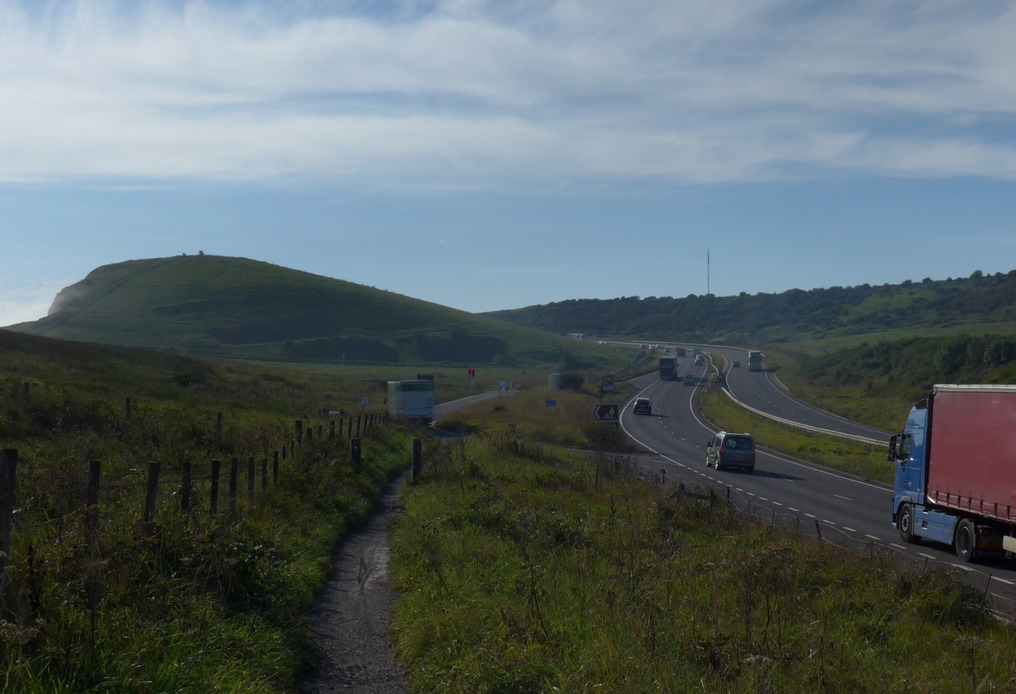 …and back up on to the cliffs towards Folkestone. This is my favourite stretch of the route. 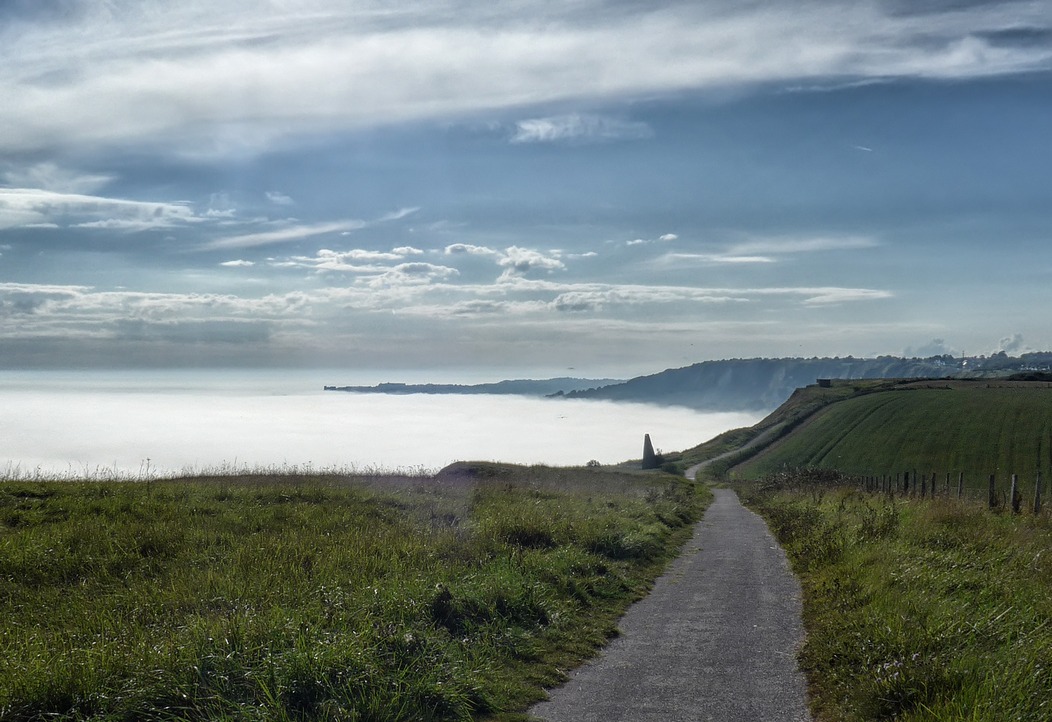 Still the fog shrouded The Channel. 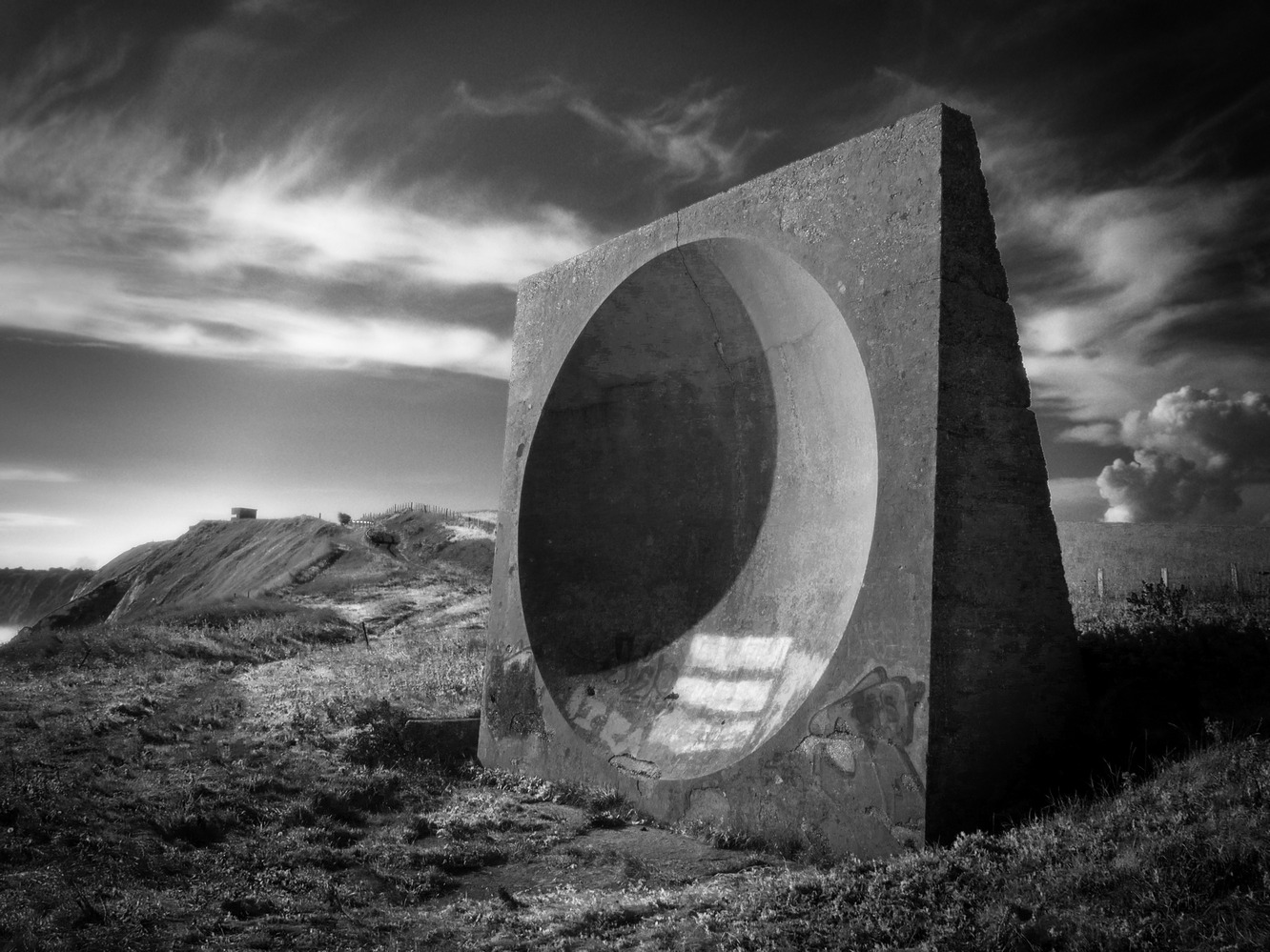 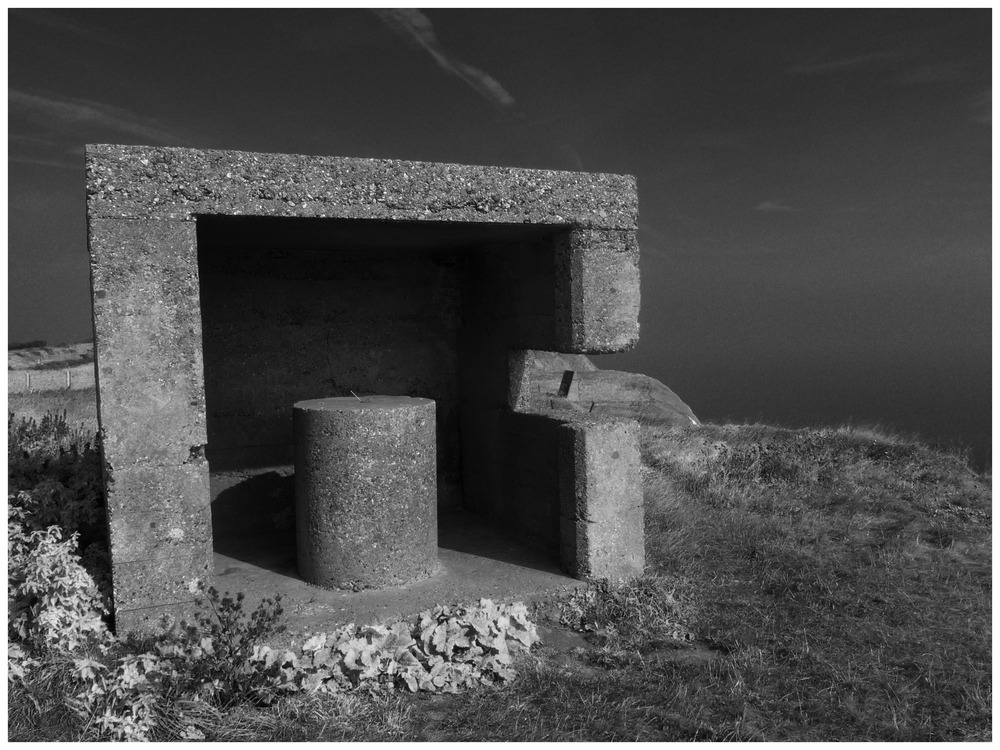 When I first saw these structures on the cliff-top on Wednesday, the first thought that struck me was that they looked like something from the computer game Myst, and that they might be remnants of some bygone civilisation’s technology. That was obviously ridiculous so I concluded that they were some form of modern art. Well, I have since learned a bit more about one of them and it turns out that my initial thought was closer to the truth. The huge concrete ‘satellite dish’ is in fact an . 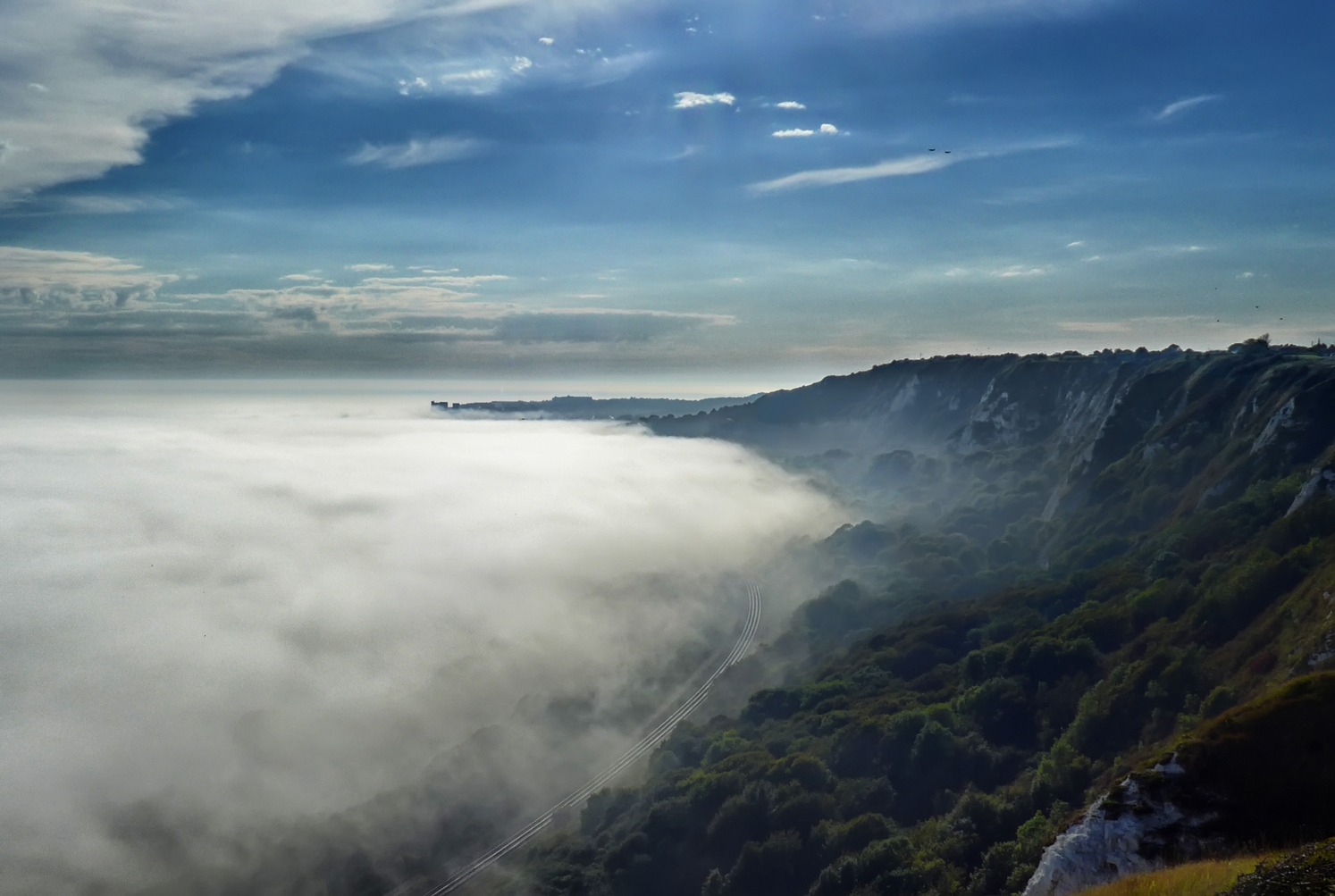 Although it should have been obvious, as I descended into Folkestone I wasn’t expecting the temperature to drop and for there to be a depressingly dull and damp mist pervading the place. 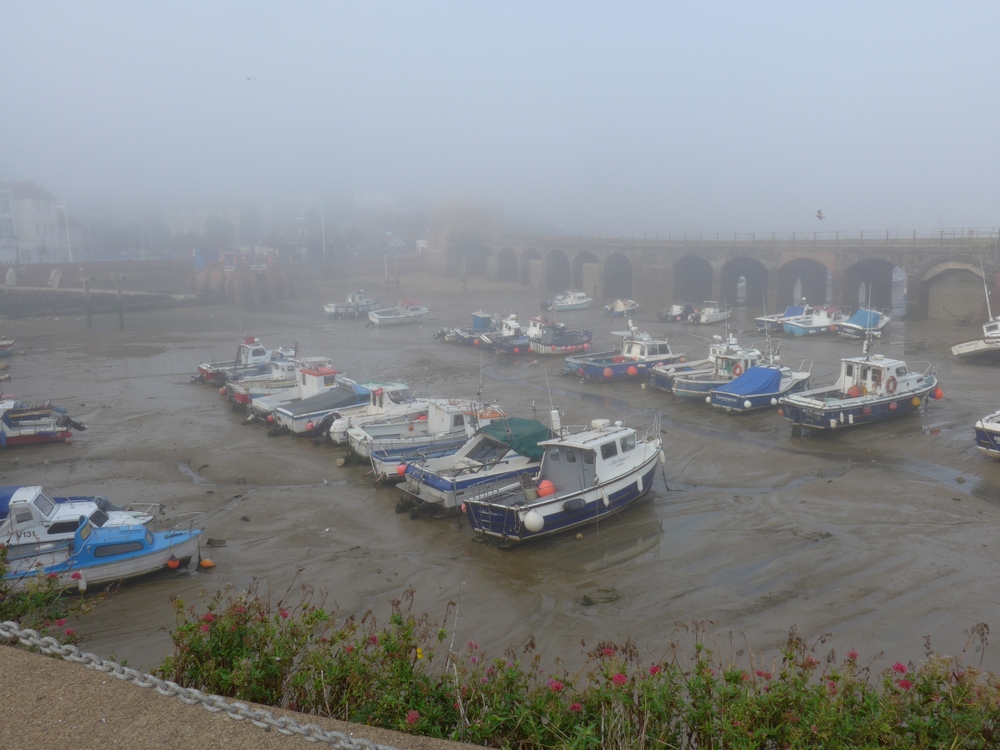 Compare that photo with

Beyond Folkestone the ride was much the same as the previous one. I did manage to make it to the Dymchurch café in time, twenty minutes before they closed, for a toasted cheese sandwich.

There had been a weather warning in force for today with the chance of thundery showers. As I was riding the final leg between Dymchurch and home, the army of Cumulonimbus that had been near the horizon all day seemed to be lurking with intent: 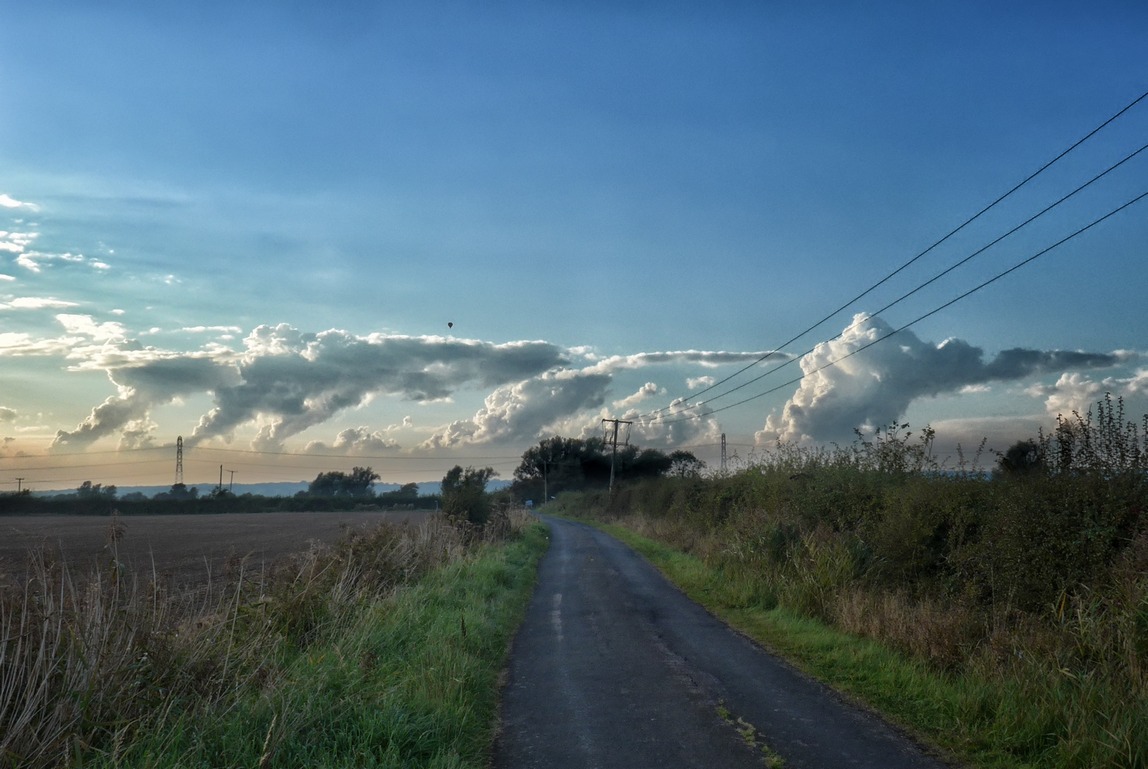 But I managed to get home dry. I put my rain jacket on to keep warm. It was dark by the time I arrived home. 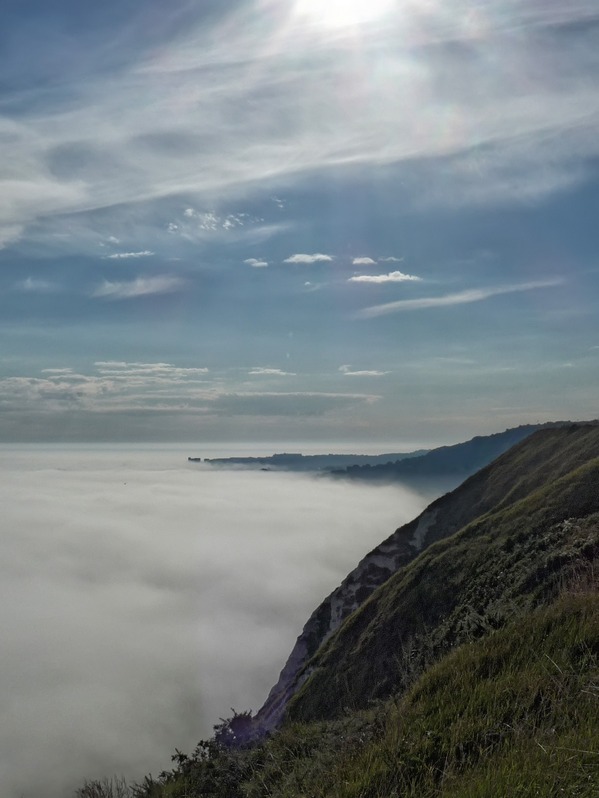 A forerunner of radar, acoustic mirrors were built on the south and northeast coasts of England between about 1916 and the 1930s. The ‘listening ears’ were intended to provide early warning of incoming enemy aeroplanes and airships about to attack coastal towns. With the development of faster aircraft the sound mirrors became less useful, as an aircraft would be within sight by the time it had been located, and radar finally rendered the mirrors obsolete. 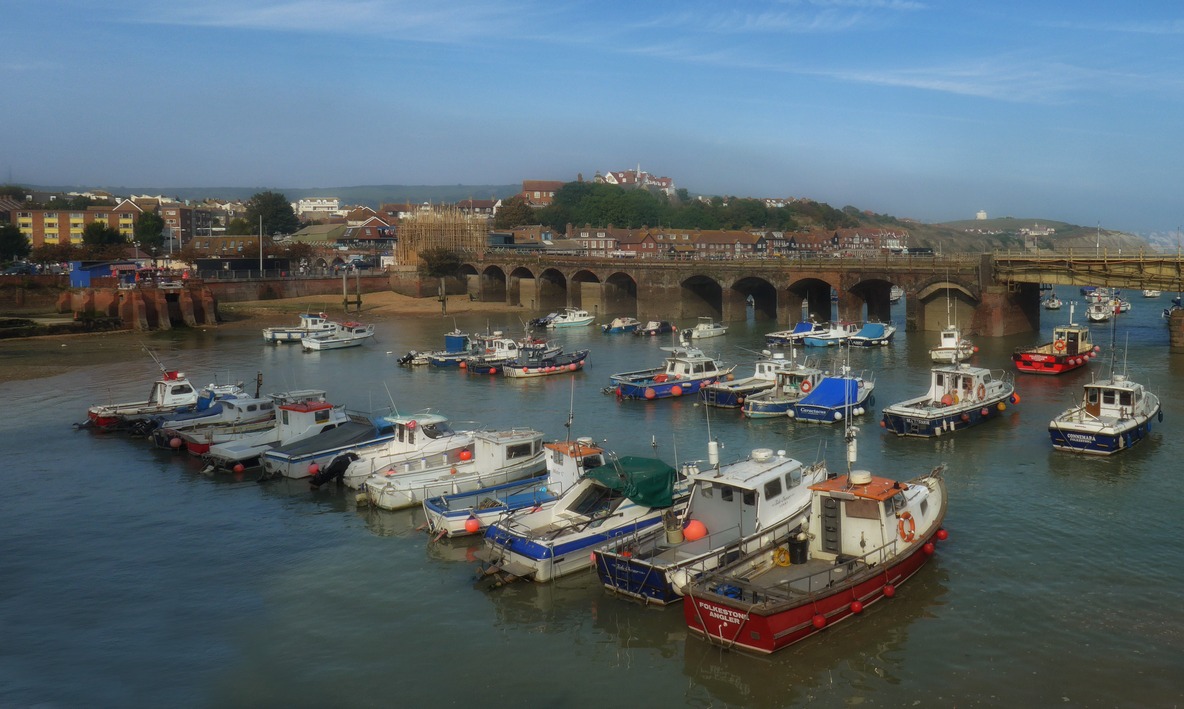