As promised, I completed my aborted trip of last week.

It was a beautiful day, mainly sunny and very warm (26ºC). This time I checked the ferry website before leaving home – there were no warnings there so I assumed it was running normally. I knew it should take roughly 90 minutes to get to the ferry so I left home at 11:20 to catch the 13:00 crossing. About half an hour into the ride comes Birling Hill and once I had climbed it I checked the time of day, same as I did last week, and again, after some mental calculations of average speed, etc, I thought it was going to be tight getting to the ferry on time so (same as last week) I upped the pace across The Downs.

I sped into Gravesend. At least I knew where I was going this time, or so I thought! I got through all the town traffic lights quickly this time and reached the place where the was, except it wasn’t there! I assumed it had been vandalised and I rode up the alley anyway. Except this time I could hardly make my way down the alley because it was full of tightly parked cars. I had to get off my bike and lift it way above my head to squeeze between the cars. When I got to the gate that leads to the ferry it was locked, same as last week! So I made my way up the ridiculously steep steps, same as last week, and asked a couple (who were sitting in the same spot as the old man from last week) how to get to the ferry. They told me it leaves from the other jetty and I should go further along the river and look for a jetty near a pub. I rode along the river for a couple of hundred yards and saw a jetty but couldn’t easily see how to get onto it. I asked another couple. They told me I had to go through a building to get to it and they pointed out where. By now I was worried that the ferry would be leaving soon. The walkway to the ferry was a long corridor at the side of a restaurant which, according to their website, is “…situated directly over the River Thames on the oldest surviving cast iron pier in the world…”. This led to another walkway down to a pontoon, moored alongside of which was a boat that looked distinctly like a ferry, except it was totally empty. I got on board and discovered that it was the ferry. I bought my return ticket (£3) had a chat with the pilot(?) and he told me about the breakdown the previous week and said that it was relatively unusual for it not to be working. 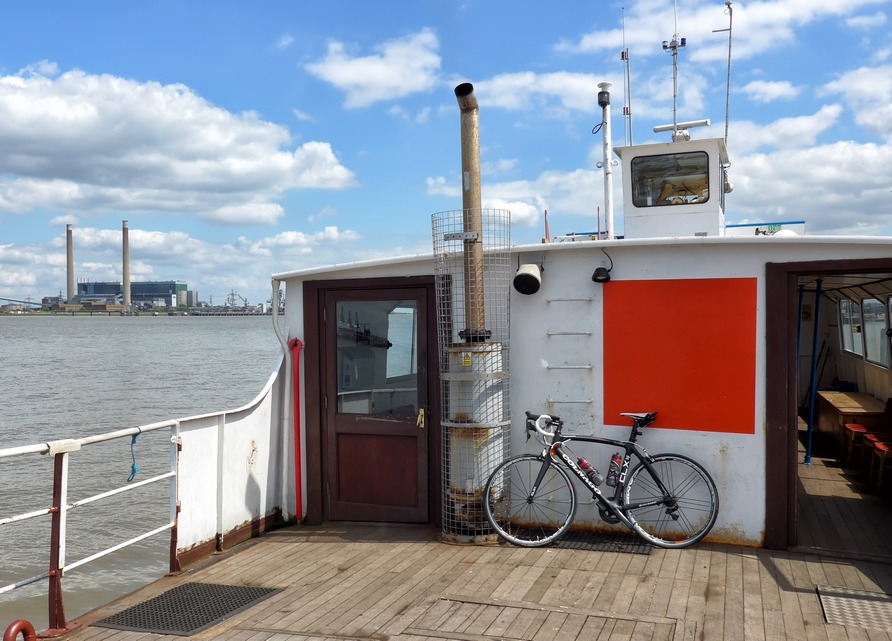 Just a couple of minutes later the ferry set off, bang on time at 13:00, with me as the only passenger! There’s something about crossing water that gives you the feeling that you are going somewhere completely different, so it felt like the beginning of an adventure. 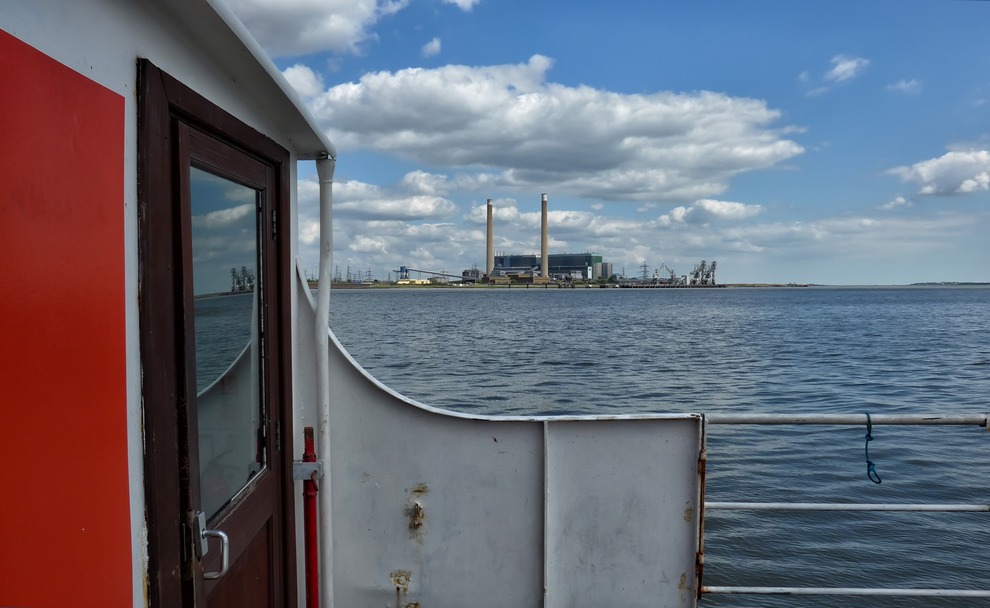 About 5 minutes later we had reached the other side. I disembarked and then tried to find my way off the pier. My Garmin suggested I went straight ahead, but there was a cast iron bridge to my right that looked like it might be the way. Just as I was trying to fathom it out, an authoritative voice, directed at me, said something like “would you please move over there”. Initially I thought this was a bit rude, but I just said “I’m just trying to find my way off this pier”. He gestured towards the bridge “straight up there”. As I turned towards the bridge I realised what was going on. I had been so preoccupied with my Garmin and looking for a way to go that I had only half-noticed that there were some WWII army vehicles, some old cars and people dressed up in 1940s clothing standing around on the pier. I had obviously stumbled upon the filming of some period movie or TV program. I guess a member of the public dressed in colourful lycra wouldn’t have added much to the realism of the scene! 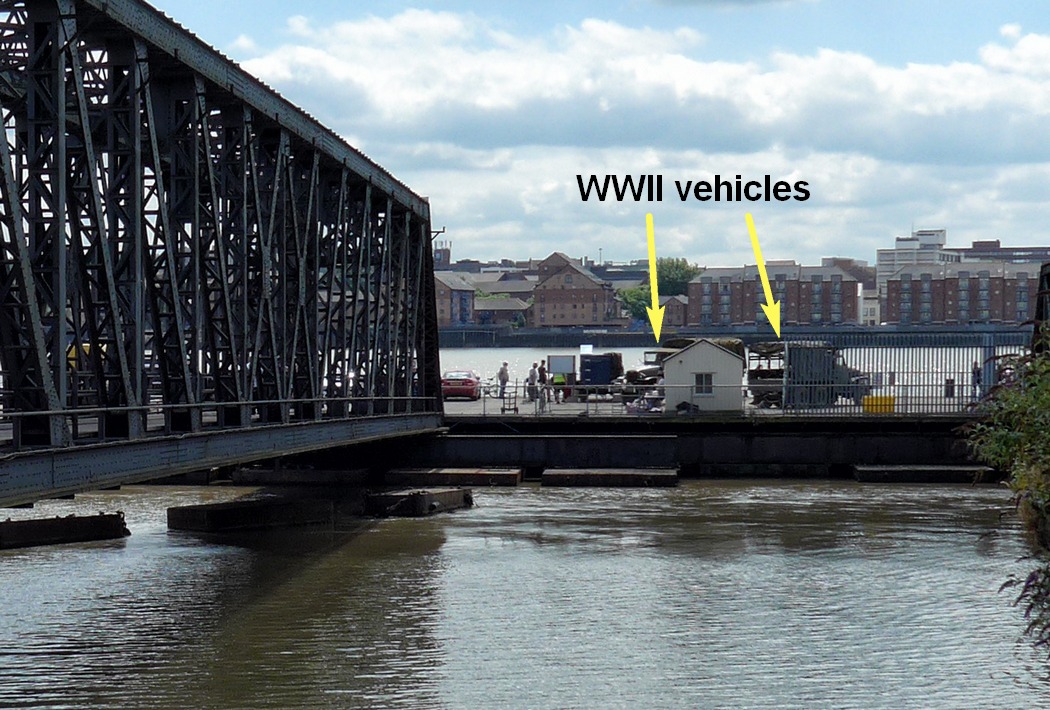 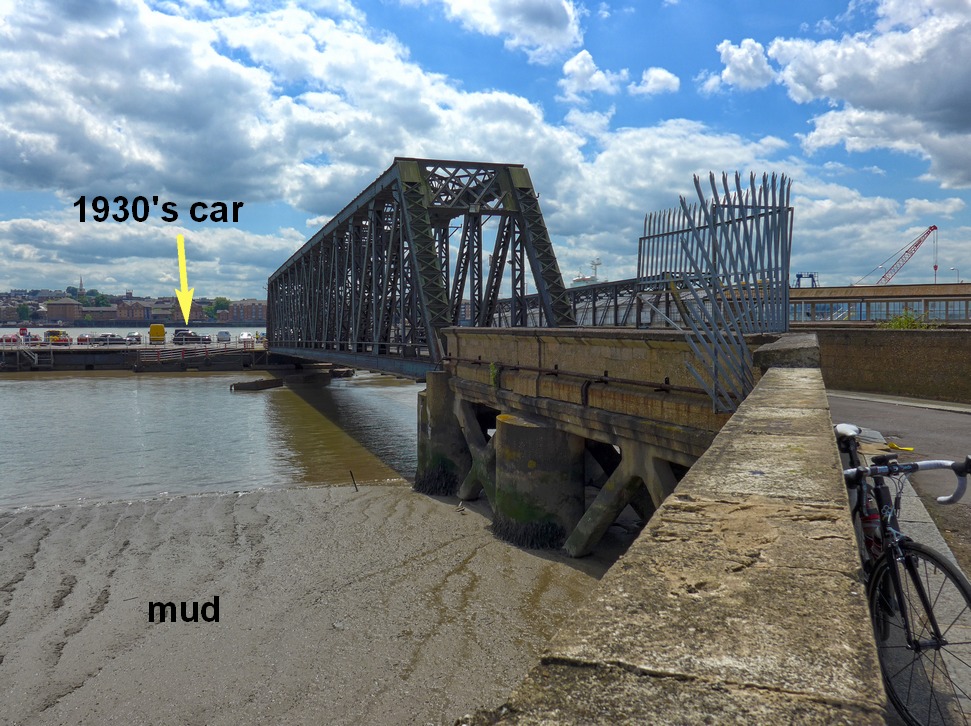 So I found my way out of the port and onto the open road, the first stretch of which was quite industrial, with container lorries and such and Tilbury Power Station dominating the landscape. 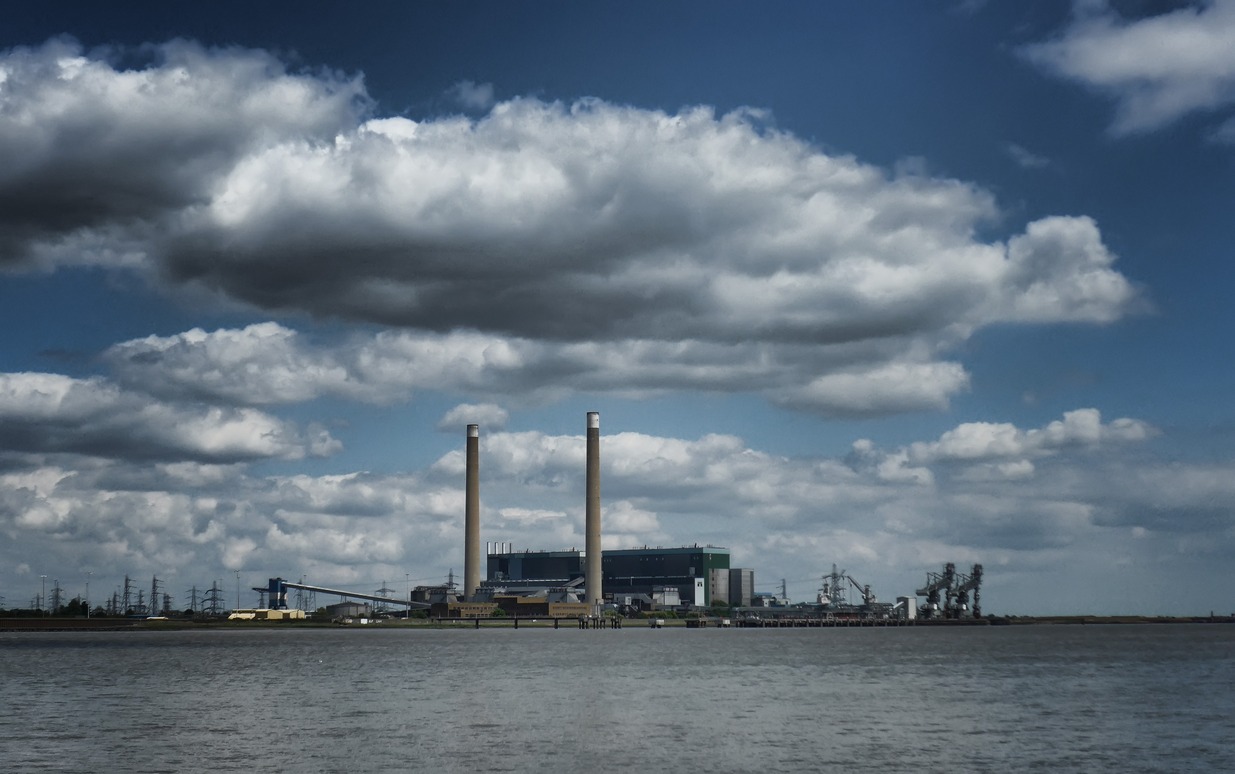 This soon gave way to open countryside. The roads of Essex seemed very smooth and wide and quite deserted compared to those of Kent.  The route made its way through the villages of Orsett and Bulphan, and on through the outskirts of Billericay to the village of Stock. I had half-planned to stop in Stock and have a coffee in a pub that I used to go to years ago; but when I got there, the pub was closed for refurbishment. I had a look around for somewhere else to eat, but was distracted by the thought of an ice lolly from an ice cream van I had spotted. It was so hot that an ice-lolly was very tempting and I reasoned that it would count as hydration anyway! As I approached the ice-cream van, the owner was having a loud argument with a traffic warden who was arguing that the van was parked right across a pavement. So I had to wait a couple of minutes before they gave up with each other. It’s true that the ice-cream van was parked in a ridiculously inappropriate position, totally blocking the pavement. However I wasn’t going to let this fact get between me and an ice-lolly! I sat on a wall and enjoyed my thirst-quencher.

Hydration-wise, I had not quite finished one of my bidons, so I still had one-and-a-bit left. I had rationed it quite well. However, the heat of the day and the effort were taking their toll, and I started getting progressively more thirsty. A couple of miles on from Stock came Hanningfield Reservoir, where I stopped for an energy bar.

As the day got hotter, the rest of the ride back was dominated with thoughts of topping up my water supply. I rode right through the middle of Basildon and this involved quite busy dual carriageways and roundabouts clogged with rush-hour traffic. In the residential streets I was keeping my eyes open for someone watering their lawn or washing their car, so I could ask for a water top-up. Typically, I saw nothing! I was picturing all the taps that must be in the houses I was passing! I was getting really thirsty but didn’t want to finish what little I had left, so I rationed it.

I got back to Tilbury about 10 minutes before the next ferry was due. This time there were several people waiting for it, most of them being cyclists, including a group of young lads who were having their own adventure on their bikes – it’s so good to see kids doing things like that rather than being glued to some inane computer game. 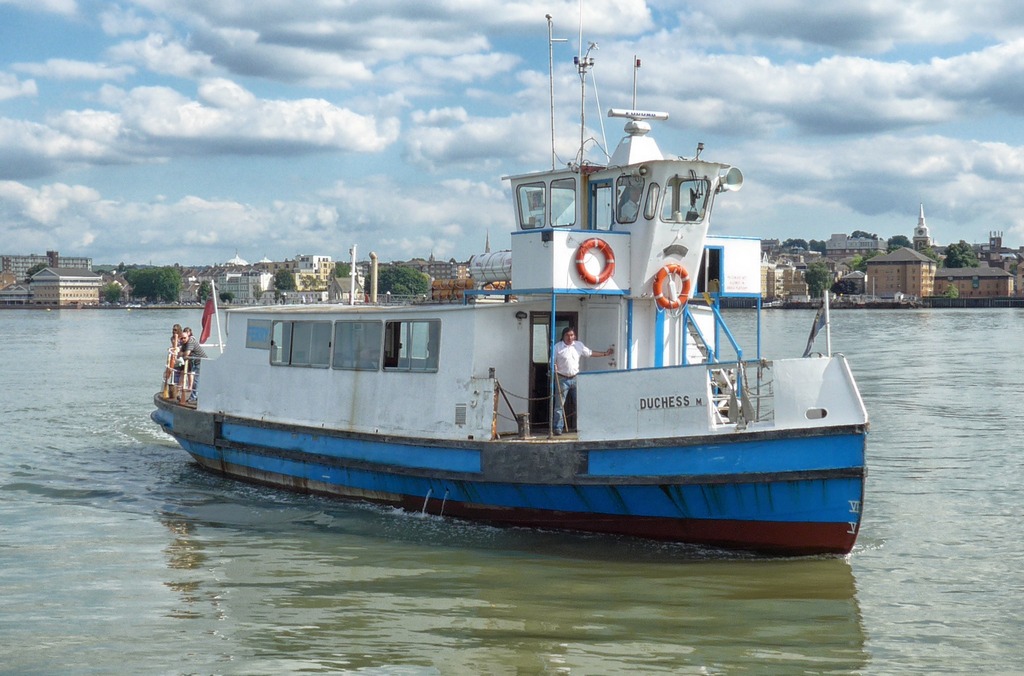 On the ferry across, the boys were asking about my cycling shoes and I got talking to another cyclist. Once I had arrived back in Kent, my number one priority was to find water. Luckily I spotted someone in Gravesend washing their car. “Is that drinking water?” I asked. It was, and he was happy to top me up. I immediately guzzled some of it down. It was lovely and cool, unlike the warm contents of my water bottle. In hindsight I wish I had got him to refill my other bidon. For the rest of the ride I had an unquenchable thirst. It didn’t seem to matter how much I drank, I was still bone dry.

About 5 miles on from Gravesend I was riding past Camer Park when I saw a water tap! As I approached I noticed a sign above it: “Water for dogs only – no cleaning muddy boots”. I thought that it must be safe for humans if dogs can drink it. When you turned the tap, the water came out of a pipe that you couldn’t quite fit anything under – I could only put my water bottle under it horizontally so I could only get a couple of mouthfuls in there at a time. I drank some anyway. Then I noticed that the water flowed from the pipe, along a trough and over the end of the trough. I realised I could fill my bottle up there, where the water exited the end of the trough. So I did. And I drank heartily from it. But then it dawned on me that the water had just flowed along a trough that had been licked by dogs! I didn’t care – I drank a bit more and then started off to continue my journey.

But I couldn’t get the dog thing out of my mind, so I made sure that I remembered which water bottle had which water; the front bidon had ‘car-wash water’ and the rear one had ‘dog trough water’. Even though owners often let their dogs lick their faces, I couldn’t bring myself to drink any more from that bidon, so I relied on ‘car-wash water’ for the rest of the journey!

Coming down Birling Hill I was enjoying the fast descent, but had to cut it short when I saw the view halfway down. Clouds were casting a shadow on some parts of the landscape while others were glowing in sunshine. I haven’t really managed to capture the full effect here: 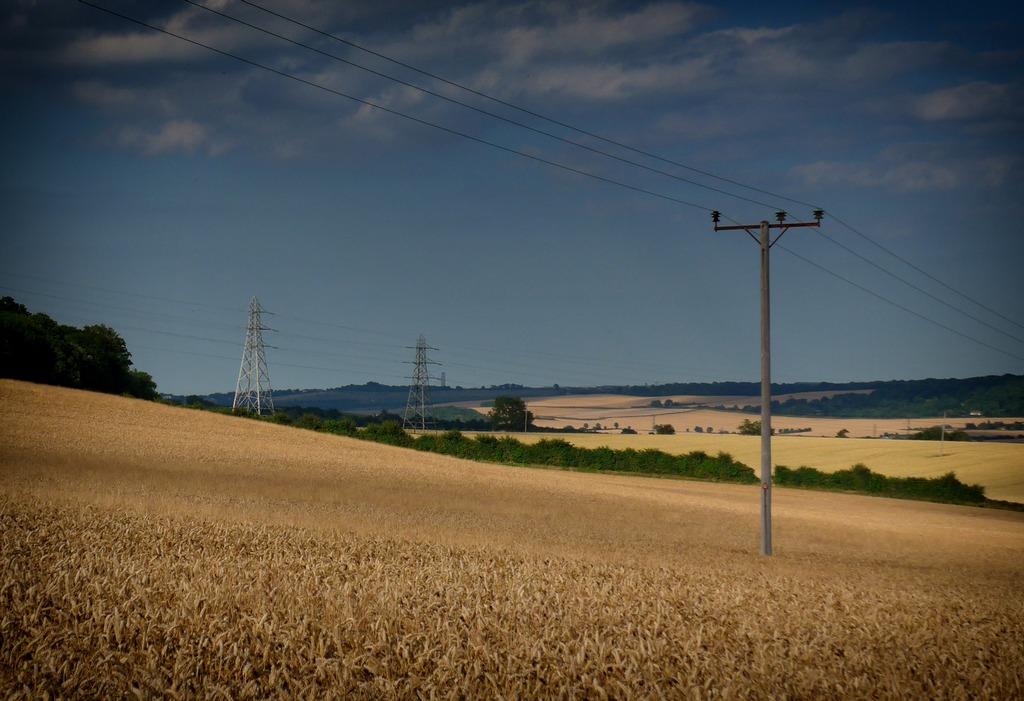 After last week’s muddy diversion through the woods, I decided to try a different, although longer, way round. The resulting path was an excellent route through this area, being primarily a ‘cinder path’ and quite smooth to ride on. 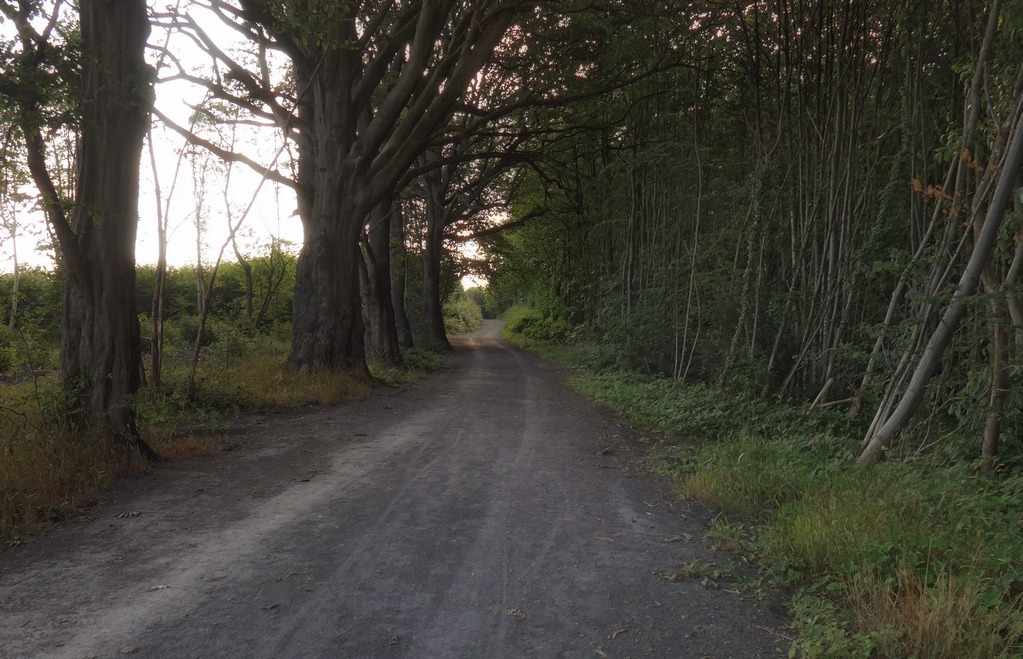 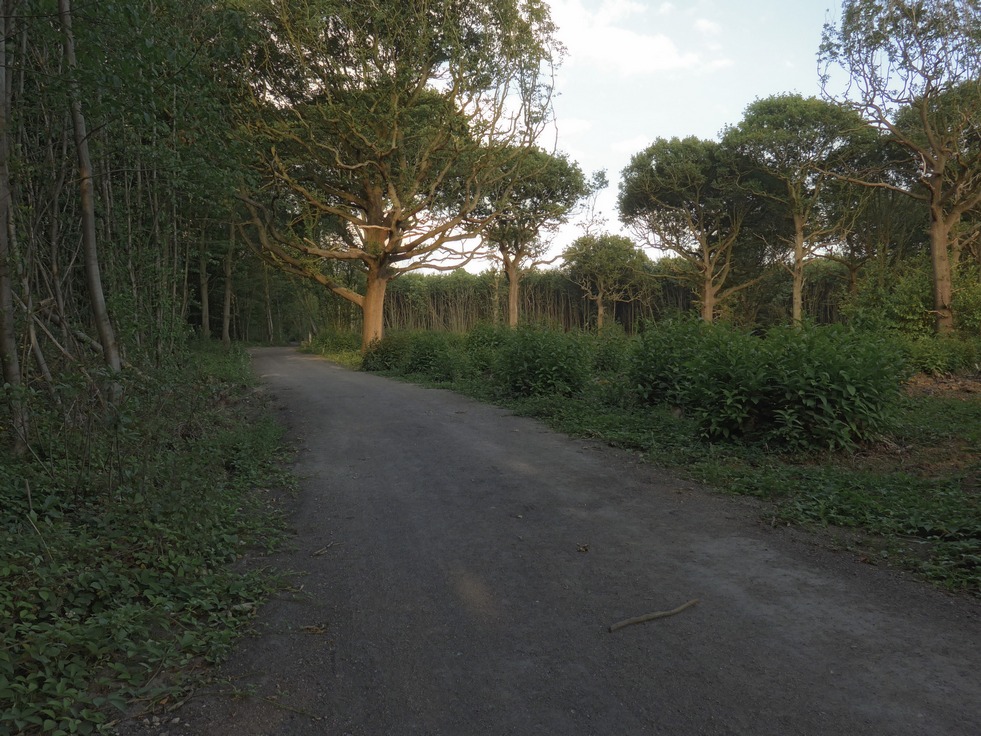 I was feeling pretty done-in for the last part of this ride. My legs were OK, but I had a sort of neck ache and a slight head ache and a general lethargy. Also, I was feeling hungry. I still had energy gels and bars left but they wouldn’t have helped – I was hungry for ‘real food’! When I eventually got home I just couldn’t stop drinking.

It had been a really interesting adventure into pastures new. I’ll definitely been planning more trips in that direction.

I was keen to know why I felt so rough at the end of this ride, whereas I had felt fine after the 200k ride two weeks before. The conclusions were:

What I should have done today:

I sort of knew what to do but hadn’t put it into practice. Must try harder next time! 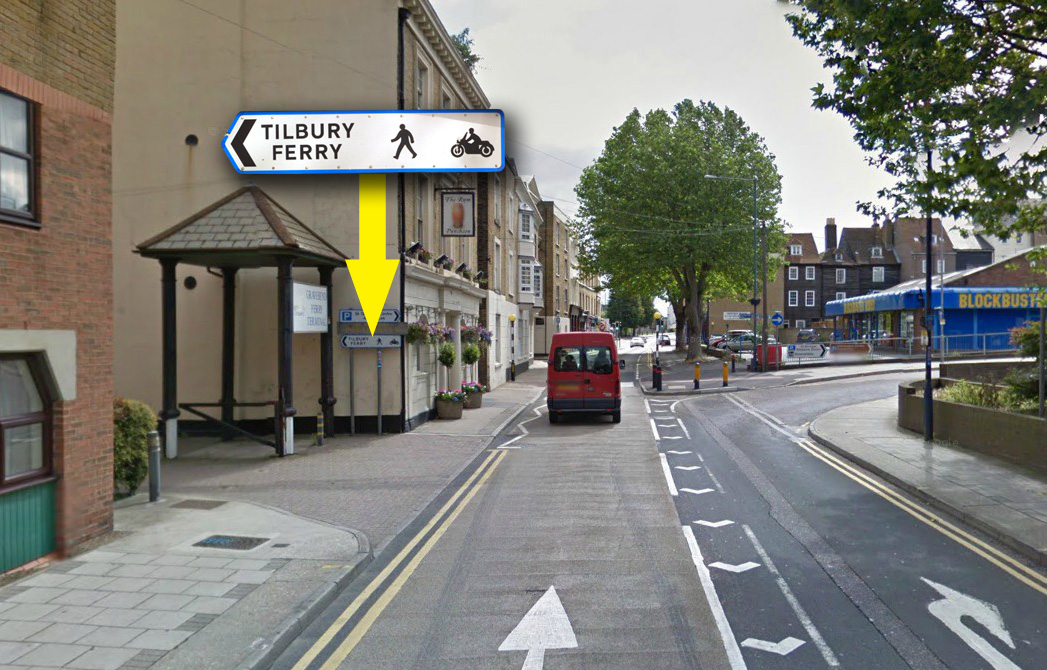