I planned this route deliberately to achieve my first hundred-mile ride. It was quite hilly! Looking at the weather forecast I saw that the best weather would be earlier in the day and that it would be turning cloudier and windier later. So I set off at the unprecedented time of 7:23 AM, after getting up at 6:35! That is such an unknown time of day for me!

The morning was very misty and quite chilly, but I decided not to take my arm warmers because the forecast said it would warm up later – I didn’t want to carry that extra weight! A couple of miles into the journey I took off my shades because they were soaking wet from the mist – I also had water dripping off the front rim of my helmet from the mist. Eventually the sun broke through and it was mainly a beautiful sunny day.
Most of the route as far as the A21 was known to me, but after that I was in uncharted territory. And it was very lumpy territory. Once into East Sussex, the road just never stopped going up and down. A long descent to Tide Brook was followed by a climb of 250 ft or so, and then back down again to cross another stream at Coggins Mill, then it climbed again another 200 ft to Mayfield. Shortly after that it plunged down again, this time to cross the River Rother, after which it climbed again. This pattern continued until Wartling, a mile or so past Herstmonceaux, where the road finally flattened out as it crossed the Pevensey Levels, an area of marshland that has been designated as a nature reserve.

The next eight miles were a delight. With the sun shining and hardly anyone around, the Pevensey Levels were very peaceful and, more importantly, FLAT! The area reminded me of Romney Marsh, although it seemed less exposed somehow. This idyll ended as I approached Polegate, just before which my route used a half-mile section of to get across the busy A27. South of Polegate there was a return to hillier territory as I wended my way across Beachy Head, the eastern end of the South Downs. 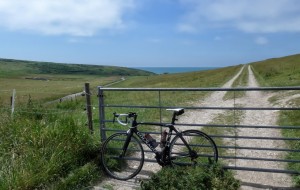 By the time I reached Birling Gap I was really hungry, for ‘real’ food, not energy gels! So when I got to the café I was worried when I overheard tourists in the entrance to the café saying things like “it’s not open”, “there’s some sort of problem” and “this is not good enough”! NO! I was desperate for food! I asked the lady in the café and she said that it was closed for meals but they were serving sandwiches over at that hatch – she pointed behind me. All I could see was a half-open window which I approached. After establishing that this was indeed ‘the hatch’, I was duly served with a pre-made ham and tomato sandwich. It was absolute heaven. After you’ve been living on energy bars and gels, any other sort of food, no matter how basic, is scrumptious! I sat in the sun at one of the picnic tables and relished this treat!

Half an hour later it was time to set off on the homeward journey. The first thing I noticed on the way back was that the wind seemed to be behind me – what a stroke of luck! I once again enjoyed ambling around the peacefulness of the Pevensey Levels before the hills started again. The ride home was along essentially the same route, but the hills were tougher.

There was one at the 82-mile mark that seemed to go on forever as the road climbed back up to Mayfield, and some others that were much steeper than anything encountered on the ride down. In fact I was finding the constant hills quite frustrating and I was losing my sense of humour! For example, my gears had been playing up all day (it wouldn’t change smoothly from 2nd to 3rd) – on the ride down I just thought “oh that’s a bit of a pain” and just worked round it. But now I was getting more frustrated and at one point I’m pretty sure I said (out loud to my bike) “work, you useless piece of shit!” 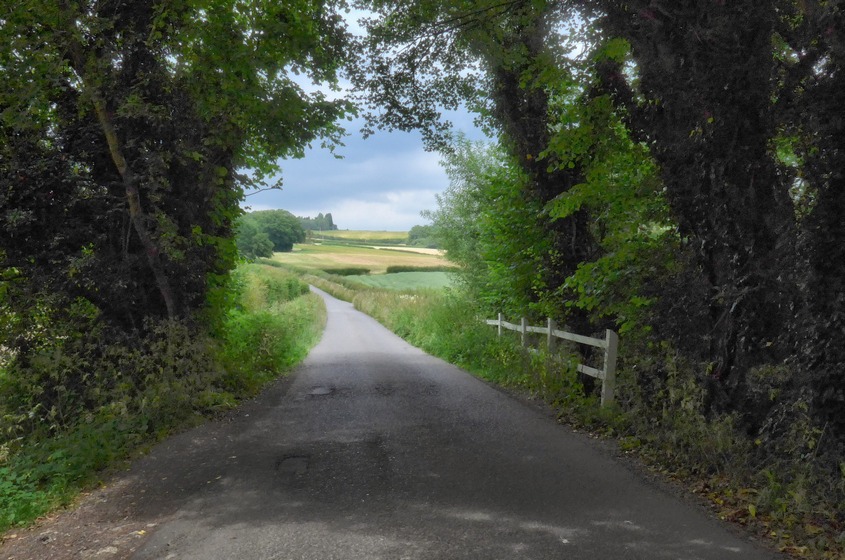 It became quite warm in the afternoon, cloudier too. That, combined with the hills, meant that I was drinking more, so I had to be careful to ration my drink. As I got nearer to home the wind picked up significantly and the skies darkened. The wind was against me now but I was on the last leg and it was quite flat – I knew I just had the one final hill to climb to my house. There was rain in the air as I arrived home. When I got back I looked at the clock and saw that it was only just after 4! I couldn’t believe it – it felt like I had been gone for weeks! That’s what happens when you leave so early! 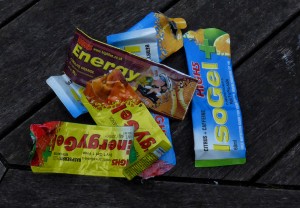 The thing I got right on this ride was making sure that I ate well. I probably could have done with more juice as I was sort of rationing it on the way back. This is what I had in my pocket at the end. This is only the rations for the return leg because I threw all the other wrappers away at Birling.

Fisik Antares saddle OK
Despite having no cut-out, this saddle seems comfortable for long rides. There is still some degree of discomfort at the end of a hundred-mile ride but I assume that is inevitable.
25mm tyres are more comfortable
I wasn’t sure when I first fitted them, but they definitely roll over rough roads with less jolting.
There is a water tap at Birling Gap
So no need to take 2 bidons – you can always top-up there.
Keep eating!
On this ride I continued eating regularly, even as I was nearing home.
Learn how to adjust Di2 while riding
Gears weren’t changing smoothly on this ride – very annoying. There is a way of adjusting the gears on a Di2 from the brake levers – no tools required. So I should be able to do it while riding along. I must RTFM!

This 14 mile surfaced path through the Sussex countryside is mostly traffic free and is a safe route for walkers and cyclists of all ages, forming part of the National Cycle Network – route 21. 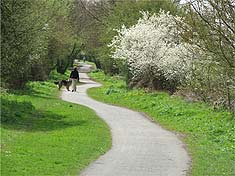