For some mad reason, I decided to enter the Hollingbourne Hill Climb this year. My hill-climbing performance has been better than ever so I thought “why not”. Pre-event, nearly everything went according to plan. I even did a test-run of the hill a few days before. I also made sure I gave myself several non-cycling days before the big day. I signed-up for the event a few weeks prior, and that’s when I found out that my start time was second to last. The only person starting (one minute) behind me was a 5-time winner of the event and current champion! So that meant he would definitely pass me on the way up and I would be last to finish, not that it was a race, as such.

When the day came, the weather was about as good as could be expected for October, albeit slightly chilly in the morning (about 9°C). On the ride to the event I wore arm warmers, knee warmers, leg warmers, toe covers and a rain jacket to keep the wind off. This was all stuff I could remove before doing the event.

When I got there I saw some other riders I knew and stood chatting to them while I pinned my number to tha back of my jersey put all my unnecessary weight into a bag to be left at the bottom. I even met, for the first time, someone who I have been ‘chatting’ to on Strava for well over a year without having actually met him. So it was great to meet up at last.

Soon it was time for the off. Clipped into pedals while someone holds the bike. I concentrated on increasing my breathing.

I stood on the pedals and launched myself up the road. Two things happened in the first fifty metres. The first was that my rear free hub started slipping – every few turns the pedals would jump forward and lose the power I was trying to exert. This was a big worry but I pushed on and ignored it – that was all I could do. The second problem was that my legs felt like jelly – I can’t really describe the feeling other than saying that they didn’t really feel like they belonged to me! There was a sort of tingly sensation and they didn’t seem to like doing what was being asked of them – it was like that thing you sometimes get in dreams where you’re trying to run somewhere but your legs don’t work! Again I could do nothing but try to push this to the back of my mind. Maybe this was just down to nerves ( one of the riders I had seen start just before me looked like he was visibly shaking as he launched himself away from the line).

I tried my best to avoid making the mistake of going too hard at the start, but I was aware that I was in a higher gear than I had been on Wednesday. Then the hill got steeper and I changed down a cog, but it wasn’t long before I was reaching for another lower gear. This was not feeling good. I was struggling much more than I had been expecting at this stage. I tried getting out of the saddle but that was immediately painful with my quads instantly complaining with that familiar burning sensation. Up to this point the road was empty of spectators. Whether any cars passed me I do not have a clue – I was in a different world. 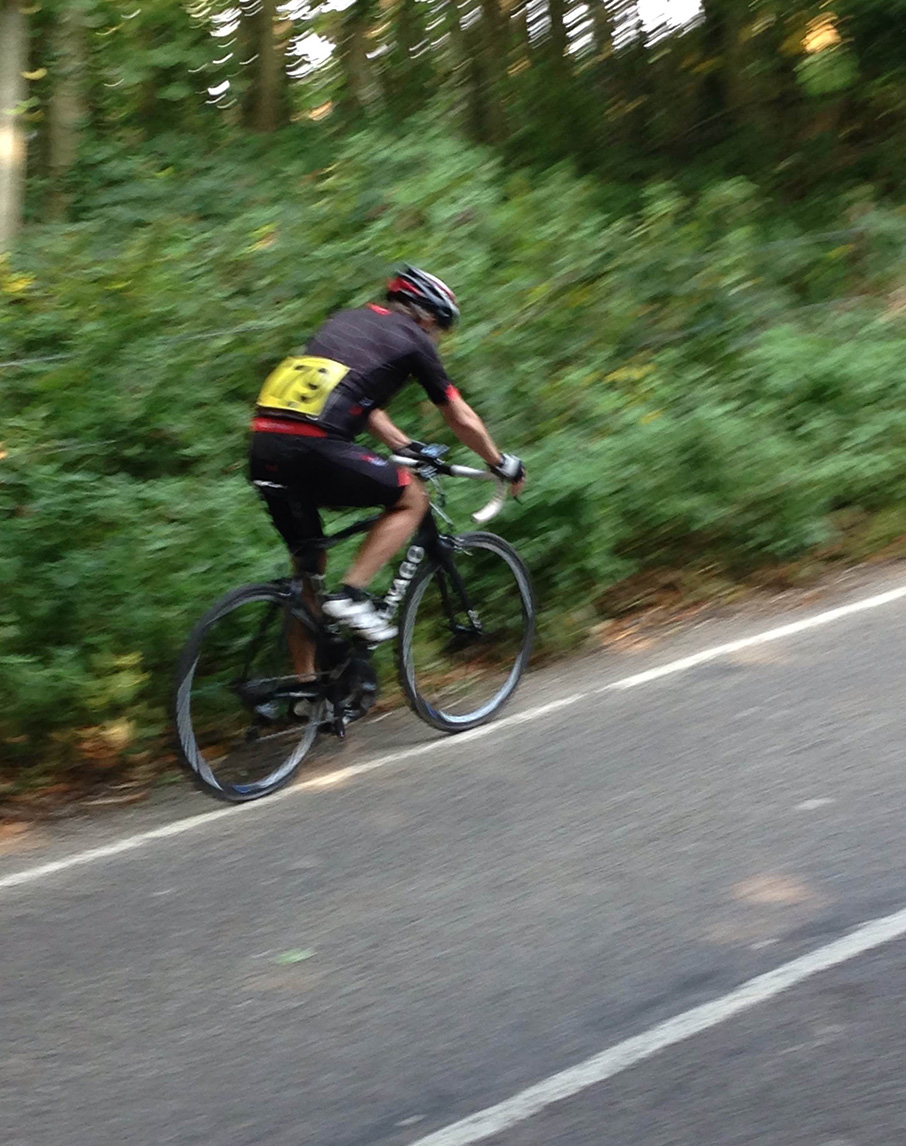 And still the gradient increased. And now, just around the bend I saw the first of the spectators. I felt like I was going along in slow motion. I was certainly in the saddle trying to keep momentum because every effort to stand up only lasted a couple of pedal strokes with instant pain in my legs. At this point I heard the rider who had started after me approach from behind and whiz past, but again I was only vaguely aware of this and didn’t actually see him. My gaze was fixed squarely at the road about a metre in front of me. Then I was at the steepest part. As I approached the ‘crowd’, who were mainly to the right of the road, I heard their encouragement; “come on Vince”, “push, push”, bells ringing (or did I imagine those?) and general cheering. I tried to show my gratitude for their effort by getting out of the saddle, but again it didn’t last long. “Fuck” I muttered as I once again sat back down. This amused a spectator who was just ahead to my left and he laughed before resuming his words of encouragement, clapping his hands together as I passed. I couldn’t believe how difficult I was finding this. 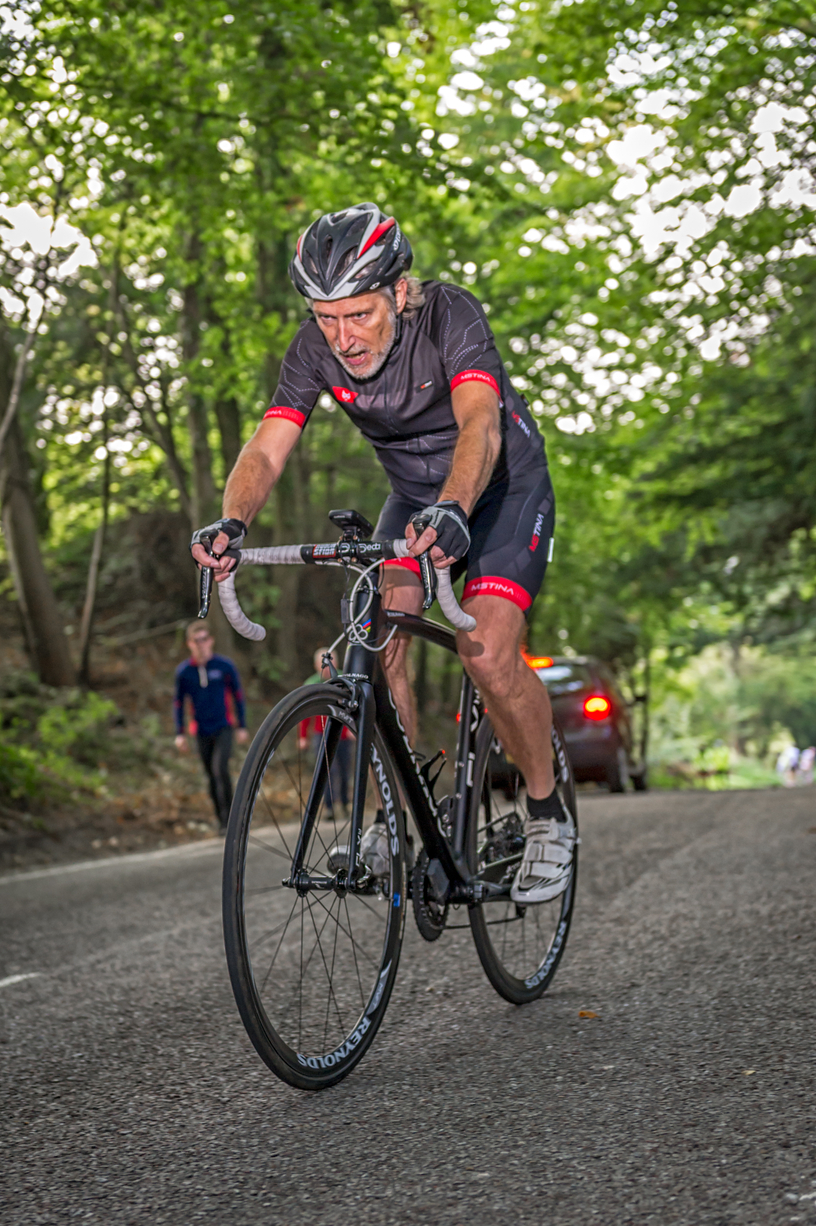 Eventually, after what felt like about an hour of pain, I saw the gradient easing up ahead as I approached the top. This was the bit where I would normally get out of the saddle, switch to a much higher gear and grind my speed up to pass the line as fast as possible. But, again, I was unable to do this. I tried. I got out of the saddle, put in a burst, sat back down when the pain became unbearable and repeated the pattern. I do remember that I crossed the finish line sitting down. This had not gone at all to plan. Once past the line I kept pedalling. If I had stopped at that point I would have passed out. I rode up the road and was still breathing about as heavily as I could. Still I kept going. Nearly half a mile up the road I turned around and headed back, gradually getting my breathing under control. I pulled into the finish area where all the other competitors were gathered. There was a refreshment marquee and a score board. I was still feeling pretty shaky as I walked around, almost in a daze. I grabbed a coffee, chatted to a few of the others and waited around for the results. My time was 5:04. When I first looked at the scoreboard I thought it said 6:04, and I could easily have believed that! I was disappointed because I had been hoping to beat the 5-minute mark.

As I was standing there watching the prizes being awarded I couldn’t stop coughing. Also my lungs felt very strange. As I breathed in I was not getting much of a ‘kick’ from it. It felt like I had asthma or something. Even deep breaths felt like I was starved of oxygen. This gradually passed, although I was still coughing later that evening. Other riders reported similar experiences and we assumed it had something to do with the cold air we had gulped in on the way up the hill.

After the prizes I, and another rider I knew from the club, headed towards Staplehurst just to get some miles in. Twenty minutes into the ride, we saw some other club riders coming back from their Sunday run, so we turned around and joined them back to Marden. It was a beautiful Autumn day with a hazy sun and hardly any wind.

What went wrong? My time was just five seconds faster than I had done on a trial run the previous Wednesday. ‘On paper’ I should have done much better. All the ingredients were there for a better time: recently I have been smashing all of last year’s hill times, mainly due to my being nearly half a stone lighter than last year. Some of those times I have beaten by a significant margin, like being one minute quicker up East Hall Hill, which is only a five minute climb. I don’t think there has been a single hill this year that I have not climbed faster than I had last year. On Wednesday I had done a trial run of Hollingbourne Hill and had shaved 20 seconds off last year’s time, and that was into a headwind. Today’s weather conditions had been almost perfect: dry, sunny and with a gentle breeze blowing UP the hill. Add that to the fact that I was much lighter – ie I left everything in a bag at the bottom of the hill while I did the event. That included bidon, pump, toolkit, phone, goggles, etc. I had even worn my lightest kit! All that, added to the adrenalin on the day, and the crowd’s encouragement should have equated to at least 20 or 30 seconds off Wednesday’s time, I think.

I don’t really know what went wrong. Certainly the fact that my hub was slipping at the start wouldn’t have helped, but it hadn’t caused any more problems further up the climb, so it could only have cost me a couple of seconds. Although no doubt there would have been some stress attached to that problem. Looking at the data later it looks like I reached the halfway point about 10 seconds faster than I had on Wednesday, but I only finished 5 seconds quicker overall. That means that the second half took me 5 seconds longer to ride than on Wednesday – and it certainly felt like it. So it would seem that maybe I had accidentally put in too much effort at the start – the fatal mistake! But instinctively I don’t feel that this explains it all. One of my theories is that I was too nervous, although I would have thought that would have just resulted in more adrenalin which, theoretically, would be good. Maybe I was affected by the air quality to some extent. I still have a wheezy cough from deep in my lungs as I write this – I have never experienced that before.

I find it frustrating when I can’t account for what happened. Still, I have a definite target of 5 minutes to beat next year. 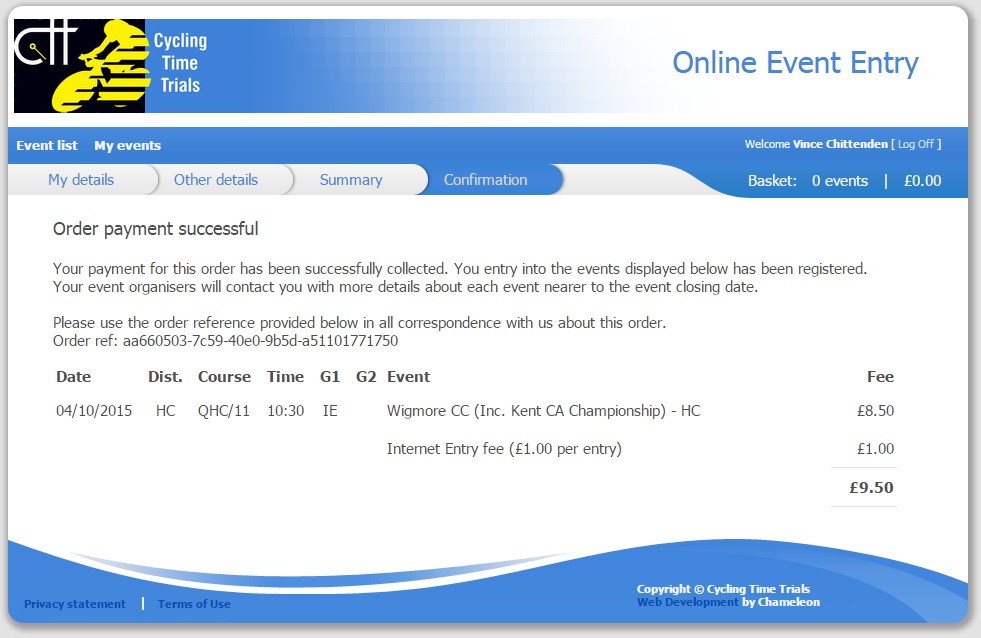