Just before I left to stay in Devon for a few days (to ride the Exmouth Exodus), I saw that Axminster Tools & Machinery were having a “10% off EVERYTHING in STORE” sale the same weekend. “Typical!” I thought, “they would have it the same weekend I’m going away”. But then I thought “hang on a minute, Axminster is in Devon. I wonder how near I’ll be staying to Axminster”. Turned out to be about 18 miles. So I had the brilliant(ly stupid) idea of riding there to buy a new Block Plane the day before the Exmouth Exodus.

I was staying in the Blackdown Hills so I already knew it wouldn’t be a flat route. I tried to include as few A roads as possible but that had the problem of including too many hills. I checked the route with Google street view to make sure I hadn’t accidentally included any ridiculously steep hills (which are common in this part of the world). I spotted a really steep descent on the outward leg, which would become an ascent on the return, so I checked it out on Ordnance Survey 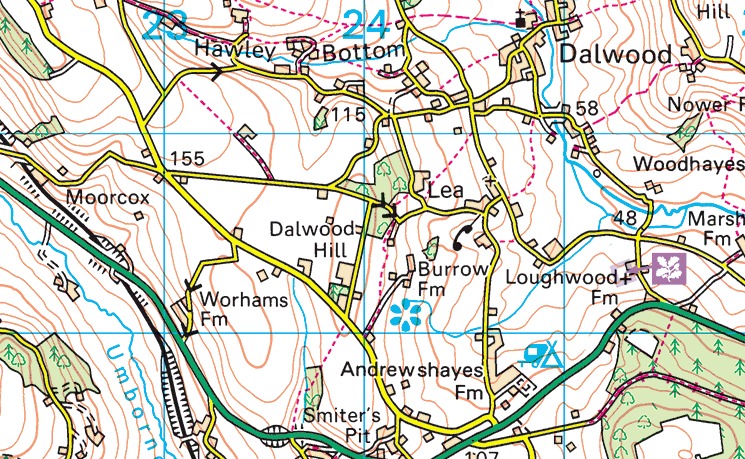 Right in the middle of the map you can see the hill I’m talking about. The double chevron indicates a gradient of 20% or steeper. I decided that I could always come back on the A35 and avoid climbing that hill.

I set off at 1pm. I wore my cycling shorts underneath my ‘civvy’ shorts and wore my spd civvy cycling shoes as I’d be walking round a shop! I wore a short-sleeved cycling top and carried my really heavy D-lock and other stuff in a backpack. I also decided to post a parcel using the post office in Honiton, through which I’d be riding. So I was carrying a lot of extra weight – on a very hilly ride – the day before the Exmouth Exodus! Was this wise? Only time will tell

It was cooler than it had been of late. There had been some sunshine and it felt warm in that but there were lots of dark clouds around and I realised that it might rain. I decided that I could always turn round after posting my parcel in Honiton if the weather or anything else got in the way.

The first four miles were flat as I rode across the top of the Blackdowns. 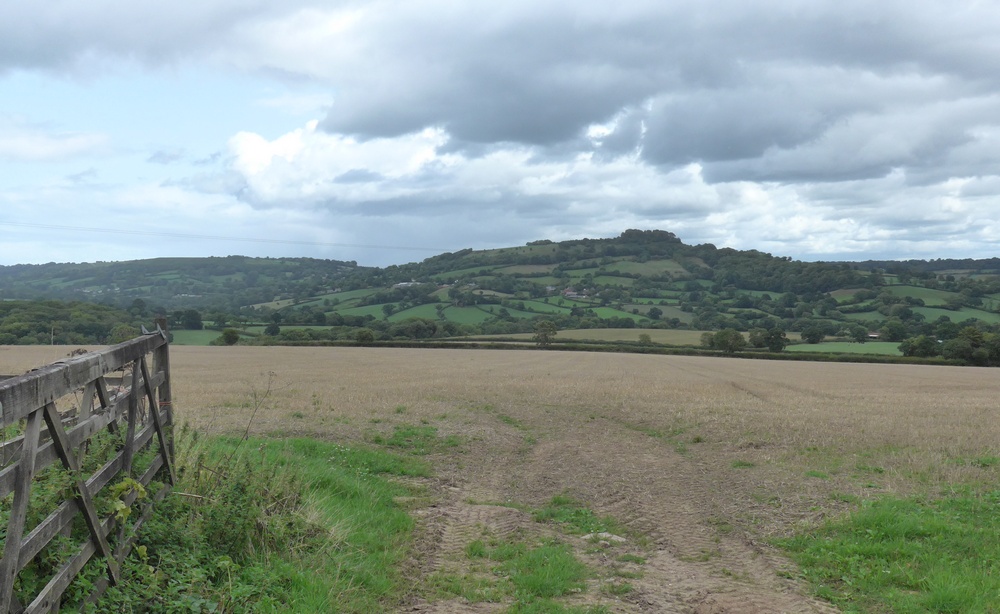 A couple of miles after I set off, it started raining. I continued onwards, thinking that I might as well at least get to Honiton to post my parcel and then think about returning straight from there. By the time I got to Honiton I was soaked. I asked someone where the post office was and went to post my parcel. Honiton seems like a really nice small town. Lots of independent shops and a friendly atmosphere. 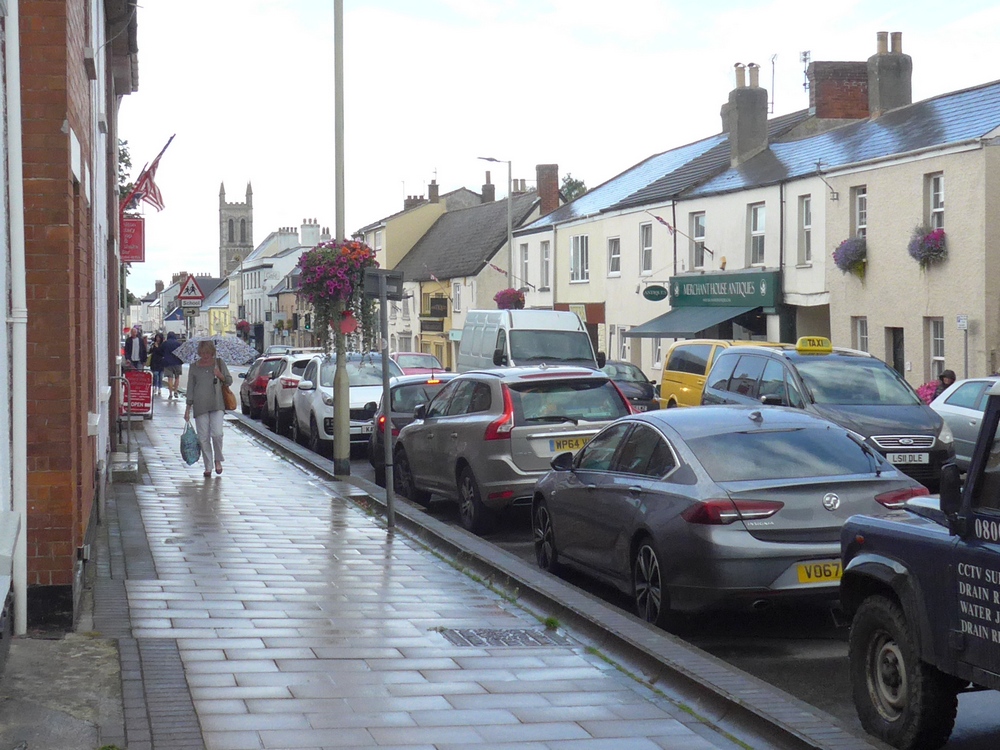 In the few minutes I was in the Post Office the weather seemed to have cleared up! The sun came out so I decided to forge ahead to Axminster. Just 20 minutes later skies were blue: 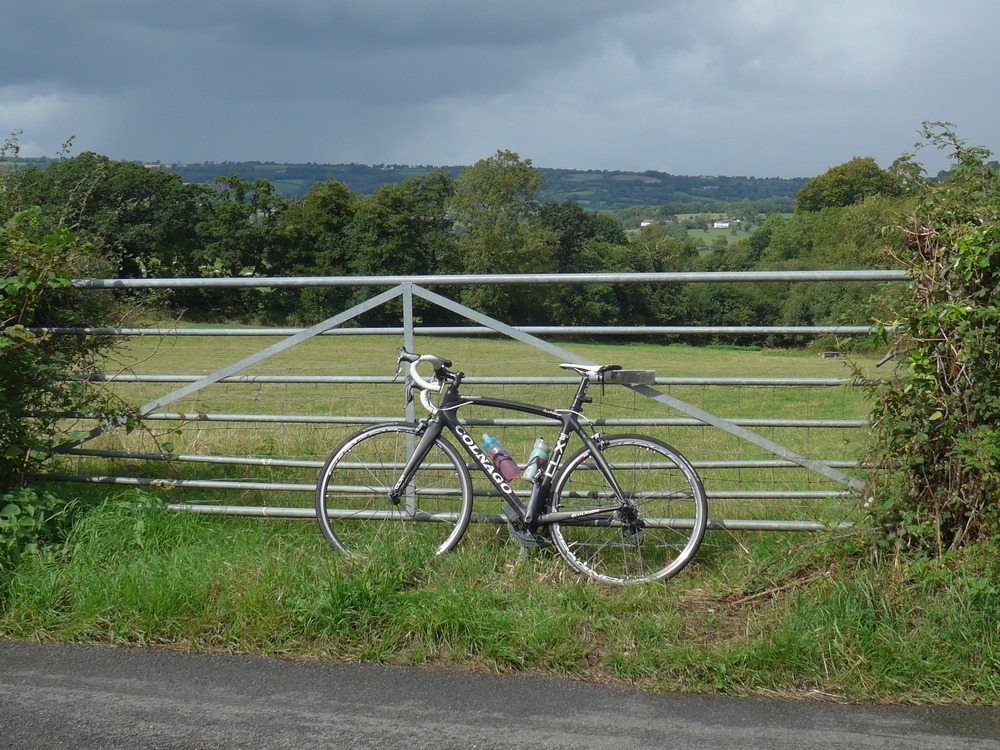 Two miles outside Honiton there was a two-mile stretch on the busy A35. Luckily it was downhill, but I was aware that it would be uphill on the return! At some point in the journey I realised I would be travelling back near to the Friday rush-hour, my least favourite time to ride.

There followed three miles of hilly back lanes in my attempt to stay away from the traffic. I had virtually dried out by now.

At one point I approached a steep descent and knew instinctively that it was that 20% one I mentioned earlier. I was on the brakes the whole way down. In fact on some hills, like this one, you don’t feel your brakes could actually bring you to a halt – they merely slow you down a bit. Nevertheless, when I saw the road bend sharply left I did manage to stop so that I could look back up the hill and judge whether I would be able to climb it on the return leg. I was weighing up the pros and cons – it was a choice between climbing that hill or going on the busy A35. I sort of decided that I’d rather walk up that hill rather than face the traffic! Sacrilege, I hear you say!

I pushed on and could soon see the church tower which I assumed was Axminster. There was another one-mile section of the dreaded A35 before turning off towards the town. Just before reaching my destination I stopped on a bridge over the river Axe when I saw a cow in the river and wondered if it was unable to get out. But then I noticed a few others in the river so assumed it was OK. I’m no cow expert. 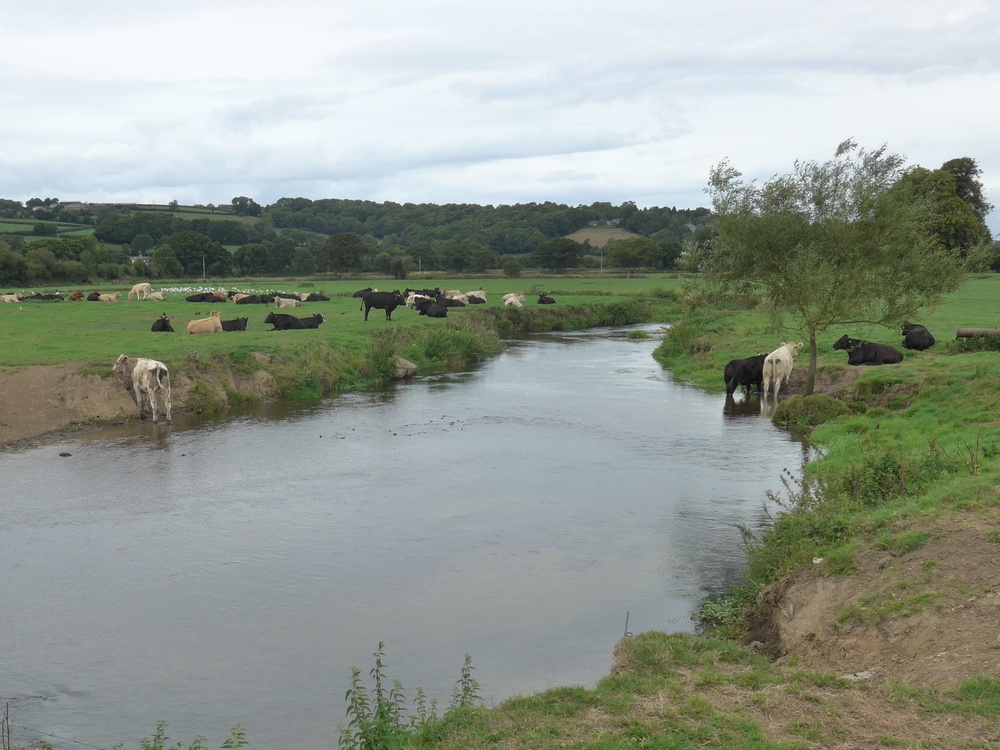 As I was standing there I casually glanced to my right and was pleasantly surprised to see that my quest was at an end when I spotted the Axminster Tools and Machinery sign at the back of their store. 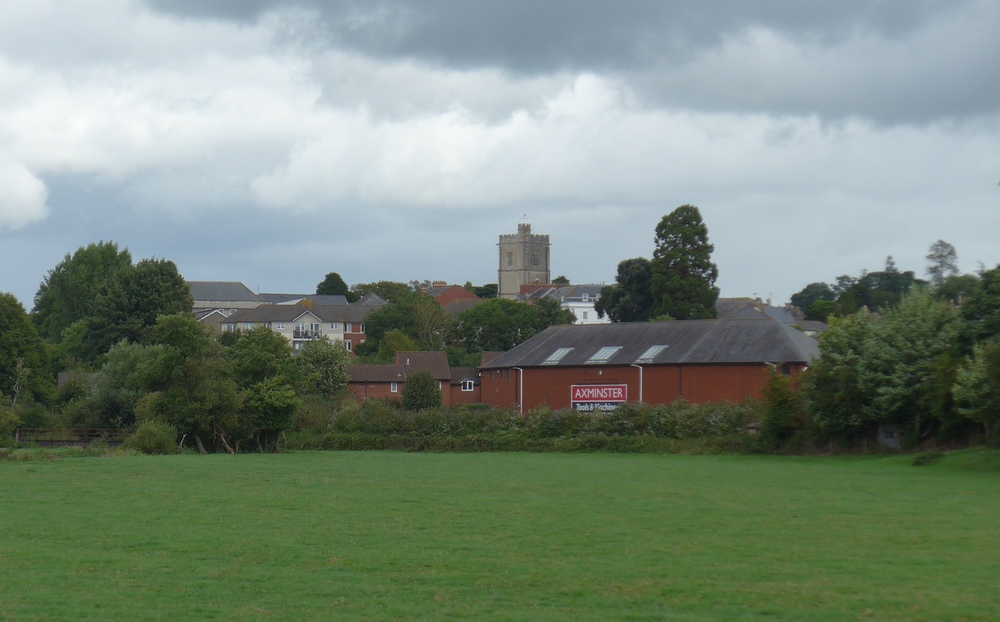 Soon I was standing outside those hallowed halls of toolery. 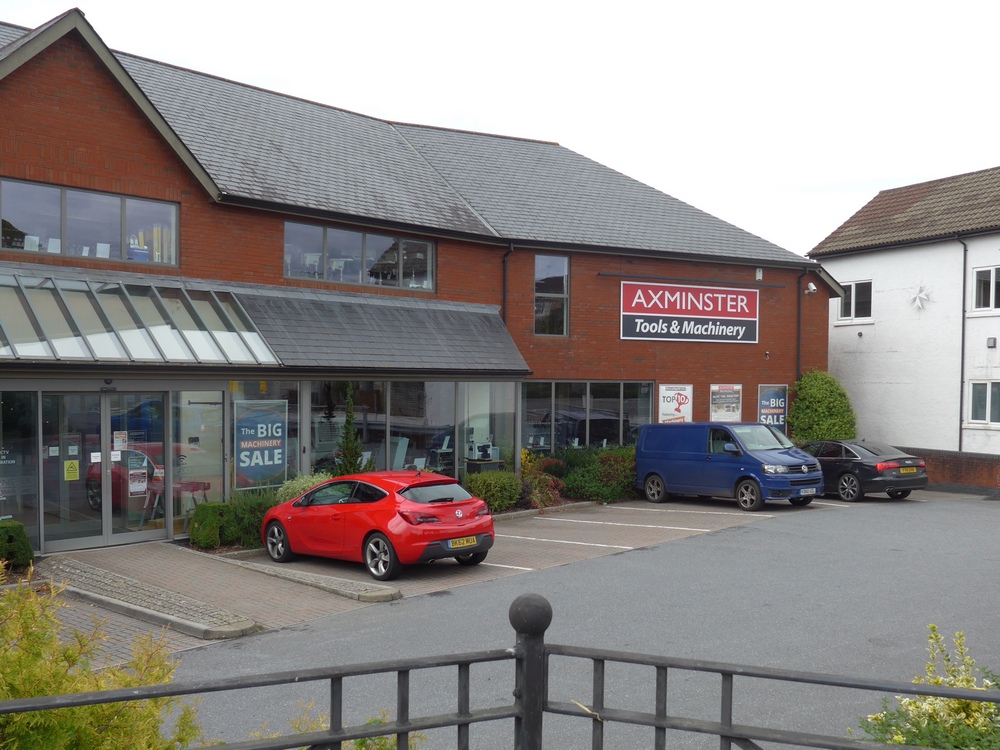 I was surprised to see no signs outside the shop advertising the aforementioned sale. Hmmm, maybe they’re inside. Nope, none inside either. “Excuse me, but do you have some kind of sale on”. “No, why do you ask?” It transpired that the email I had received was for a sale at my local branch, not all branches. Nevertheless they agreed to honour the 10% off for me. That’s the great attitude I have come to expect from this company over the years.

The next problem was that the item I wanted to buy, a Veritas Block Plane, was not in stock. “Which way did you come here” he asked. I thought he was going to suggest I ride to another branch, elsewhere in the UK! He told me they had one in their warehouse just 1.5 miles away. So I paid for it and went to collect it. That gave me a chance to see the town proper.

Not unlike Honiton it seemed to be a charming place, un-ravaged by the corporate high street takeover seen elsewhere. I soon reached the warehouse and collected my plane. My backpack was now even heavier! 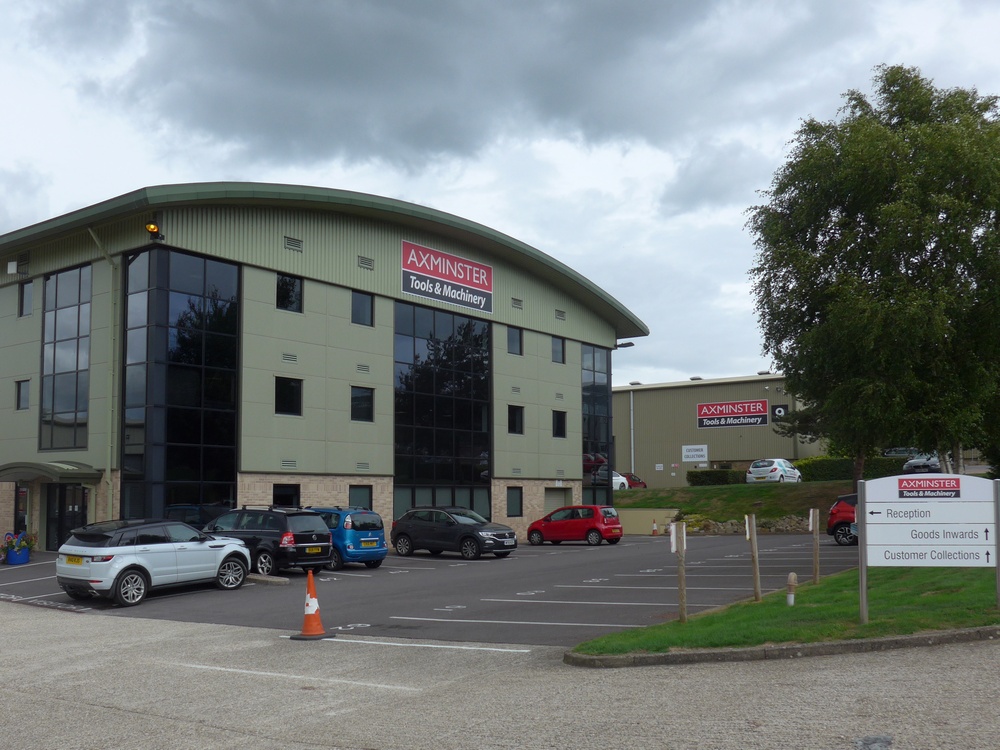 On the way back through Axminster, heading home, it started to rain again. The skies looked grey all over and the hills in the distance had disappeared into the mist. I would have taken a photo but my camera would have got soaked.

I wasn’t looking forward to the A35 again. The fast noisy traffic, noisier still on the wet roads, really takes it out of you concentration-wise. You’re constantly on your guard. Anyway, after the mile stretch came the turn-off for the back road which included that steep hill. I decided I’d rather have that than the traffic, so I turned off. Even approaching the gentler slopes I found myself in first gear. I thought there’s no way I’d get up the steep part. Then I recognised that corner where I’d stopped before. I briefly thought of stopping again to decide whether to walk. In the end I didn’t stop. I just climbed slowly up it. Luckily the steep bit is mercifully short. It always helps when you can see the end of your suffering just up ahead!

At some point it had stopped raining again and the sky was breaking up a bit, but no sun. I stopped under a tree to eat a banana. Bad move. Don’t stand under a tree after heavy rain. Every time the wind blew I got rained on! I was already wet enough. 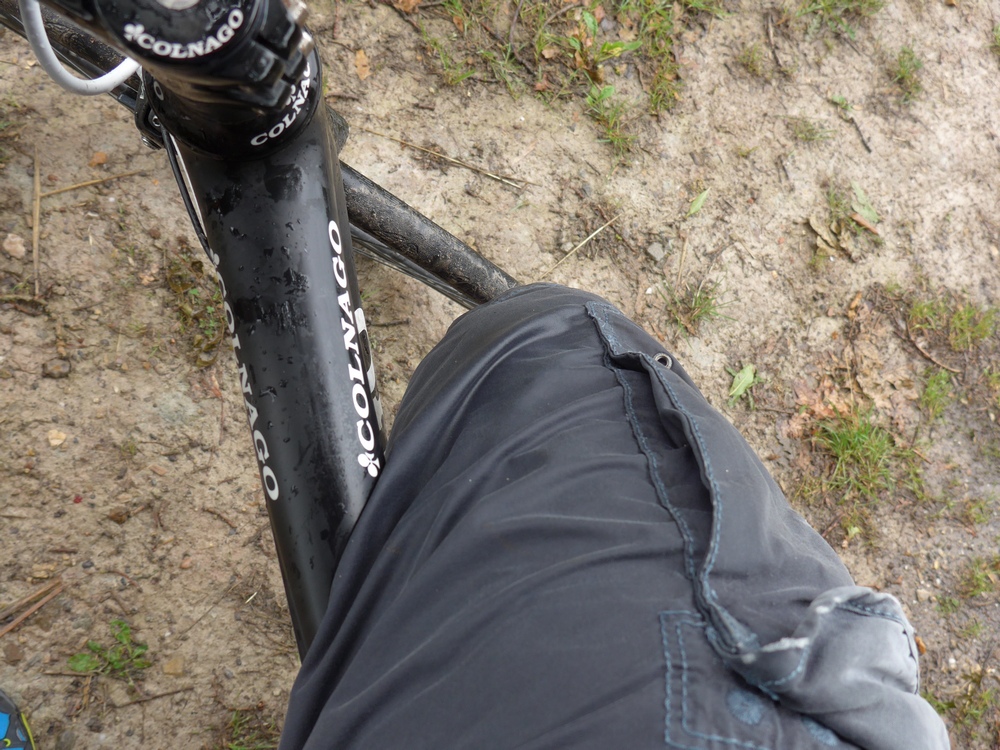 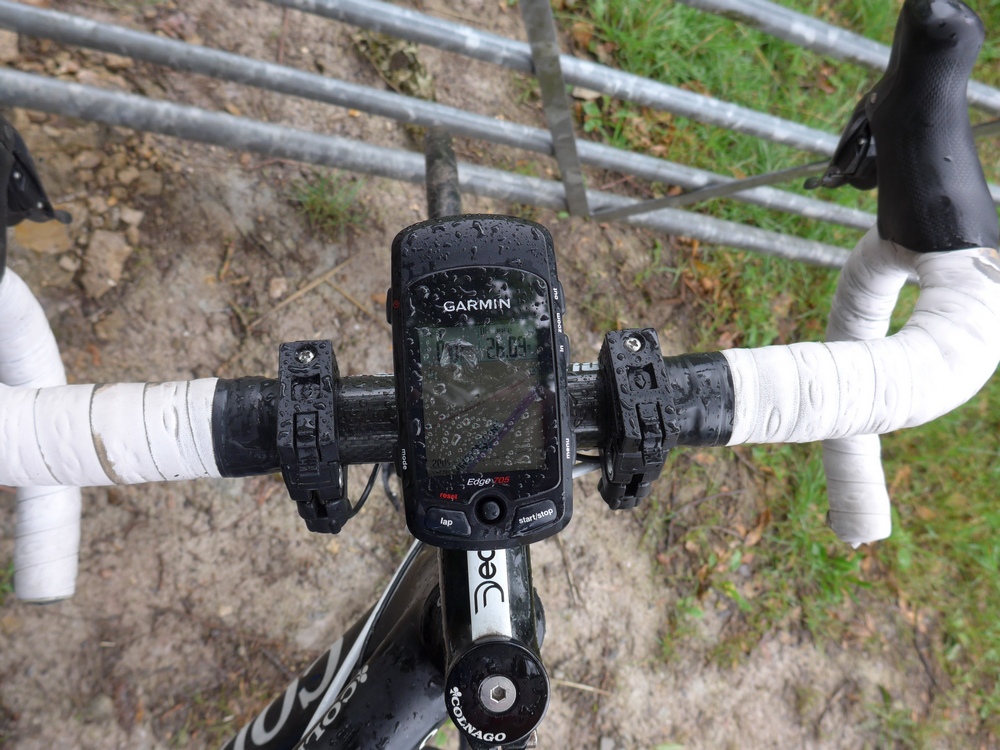 I was soon back on the dreaded A35, but now I was climbing slowly. A couple of times I pulled over when larger vehicles found it difficult to pass me. When I spotted the next turn-off for the back road diversion I ignored it and stayed on the main road knowing that I would soon be in Honiton. There was a spectacular view over Honiton from the A35, but I couldn’t stop for a photo because it was non-stop traffic in both directions.

Just past Honiton, I stopped to take a photo of the River Otter (See below for more related to this river). 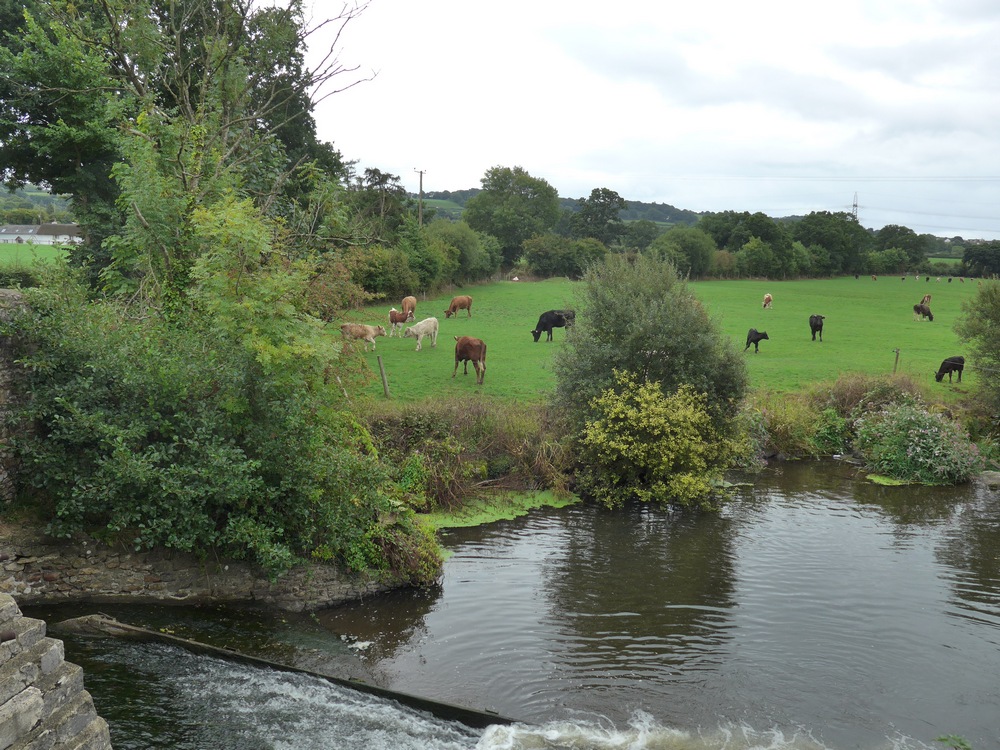 Even though I was quite a distance from them, a herd of cows got freaked-out by my presence and started running away! 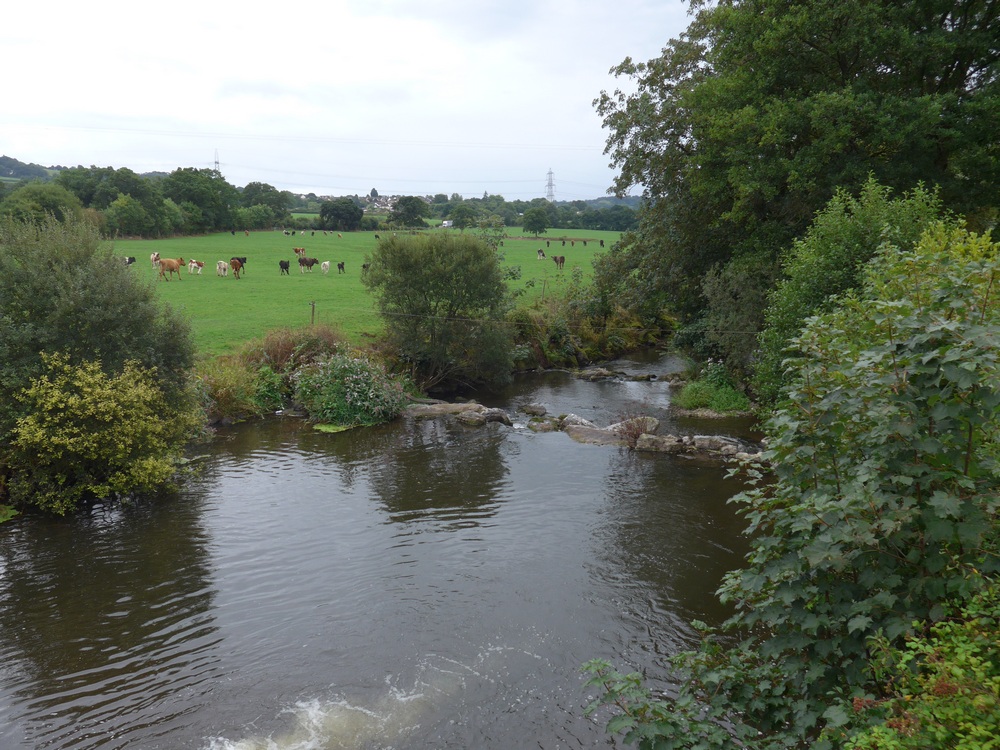 As you can imagine, given my lack of knowledge, I had no idea why they exhibited this behaviour.

There then followed the 600 ft climb to the top of the Blackdown Hills again. I just slogged away slowly, mainly in very low gears and quite often seeing single-digit speeds on my Garmin such as 7mph! I began to imagine the warmth and comfort of my motorhome. 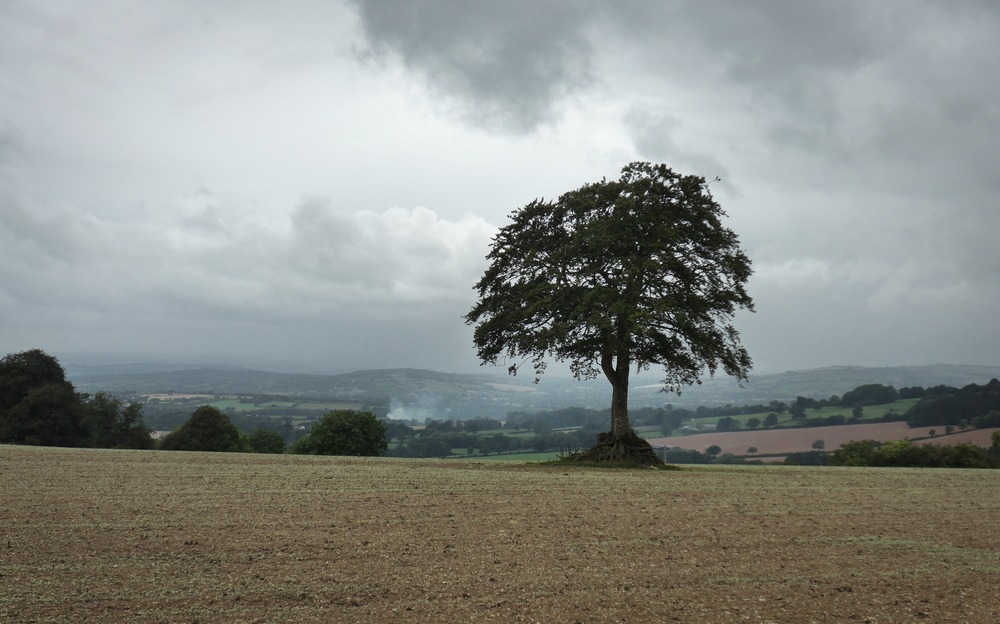 By now, the bike, the roads and I were dry. 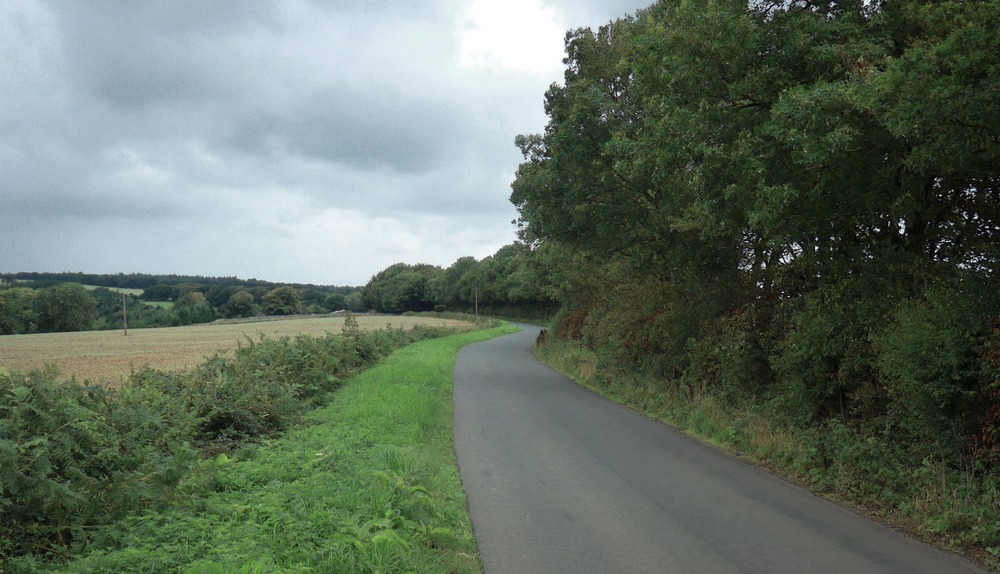 There were just a few miles of relatively flat roads to go now. But what looked like it would be a nice end to the ride was scuppered when it started raining less than a mile from the campsite. I was hoping to get the bike, and me, into the van while dry, but by the time I got back we were both wet again! 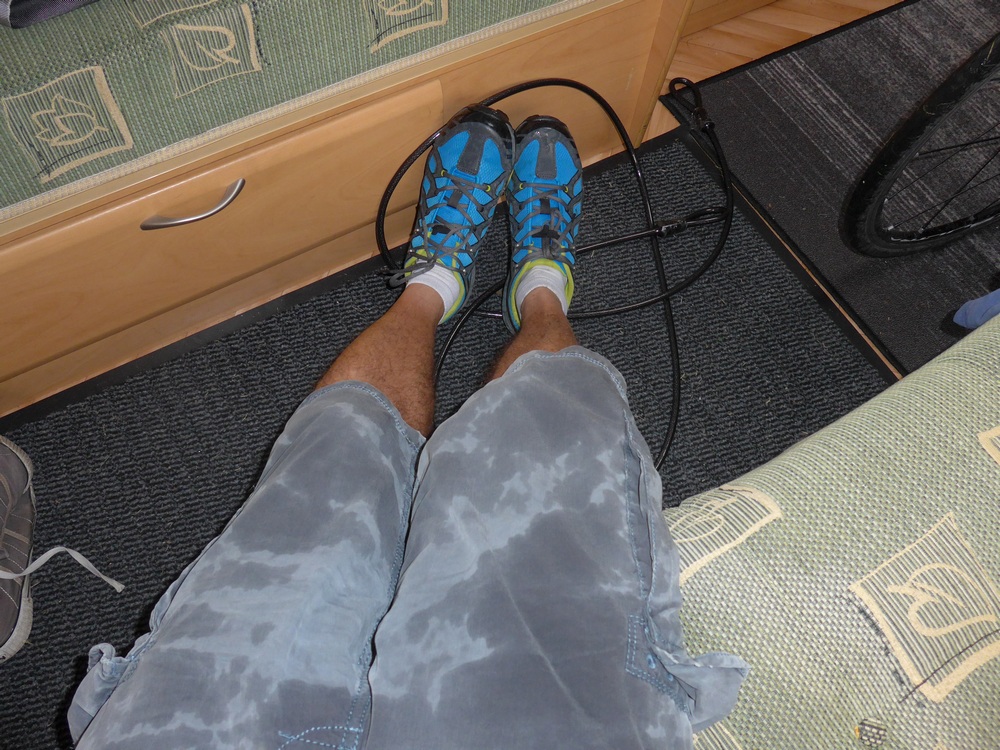 Out of interest (or frustration!) I weighed the damn back pack – 3.35kg. 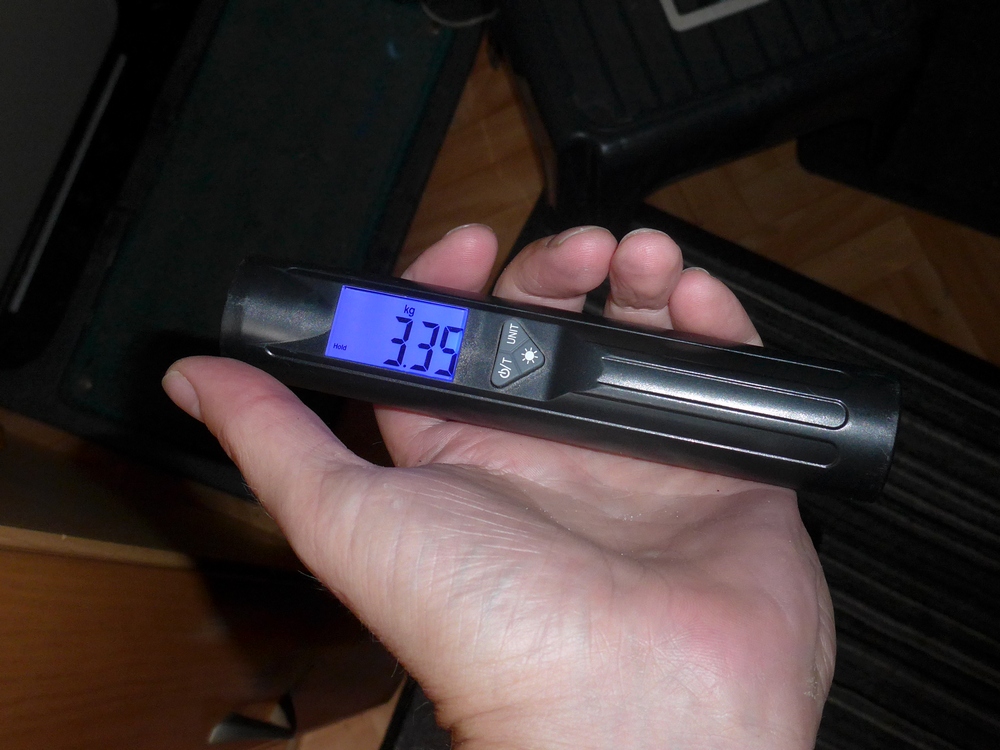 But it was all worth it when I looked at my new toy, A Veritas Low-Angle Block Plane! 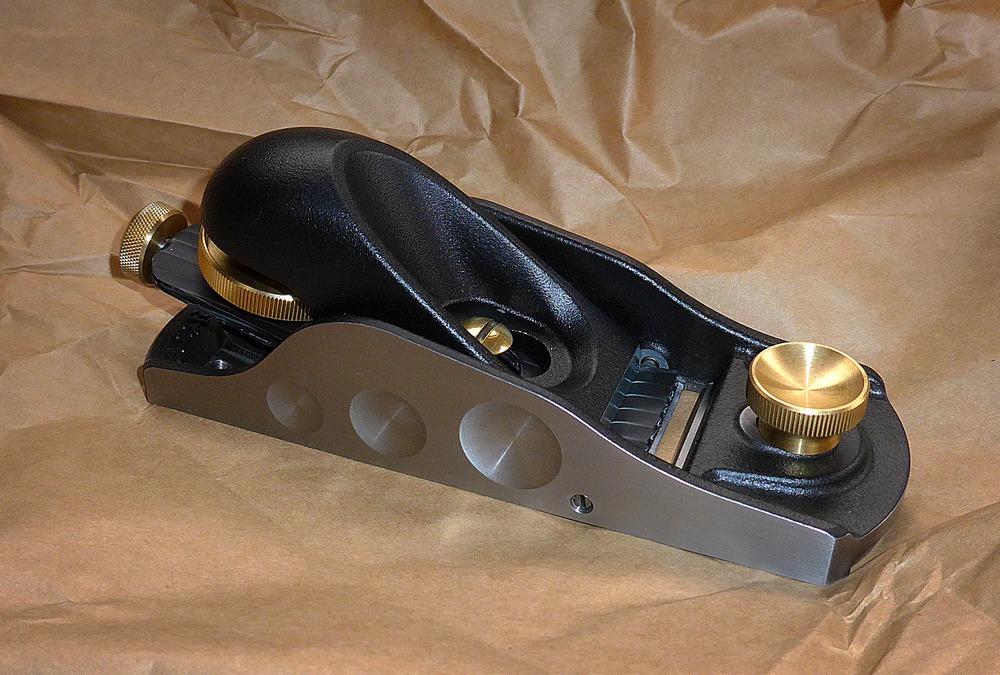 I don’t suppose there will be many more opportunities to combine two of my favourite activities.

I had mentioned this river (and the Samuel Taylor Coleridge connection) in a previous post. But I hadn’t realised that STC had written a sonnet about the river itself:

Dear native brook! wild streamlet of the West!
How many various-fated years have passed,
What happy and what mournful hours, since last
I skimmed the smooth thin stone along thy breast,
Numbering its light leaps! Yet so deep impressed
Sink the sweet scenes of childhood, that mine eyes
I never shut amid the sunny ray,
But straight with all their tints thy waters rise,
Thy crossing plank, thy marge with willows grey,
And bedded sand that, veined with various dyes,
Gleamed through thy bright transparence! On my way,
Visions of childhood! oft have ye beguiled
Lone manhood’s cares, yet waking fondest sighs:
Ah! that once more I were a careless child!

2 Replies to “Mission to Axminster”