This report coming at 18 miles. The journey so far has been along the main road that follows the river Var.

The weather didn’t look as good today as it would be tomorrow so I decided on a ride on some roads I’ve already done before and an easier ride than the other two I have planned. It was fresh and I’ve had my arm warmers on the whole time. I was riding into a headwind but making good progress. A roadside thermometer at one point read 15ºC and that feels about right. At about ten miles I entered a part of this road I’ve never ridden before, only driven. 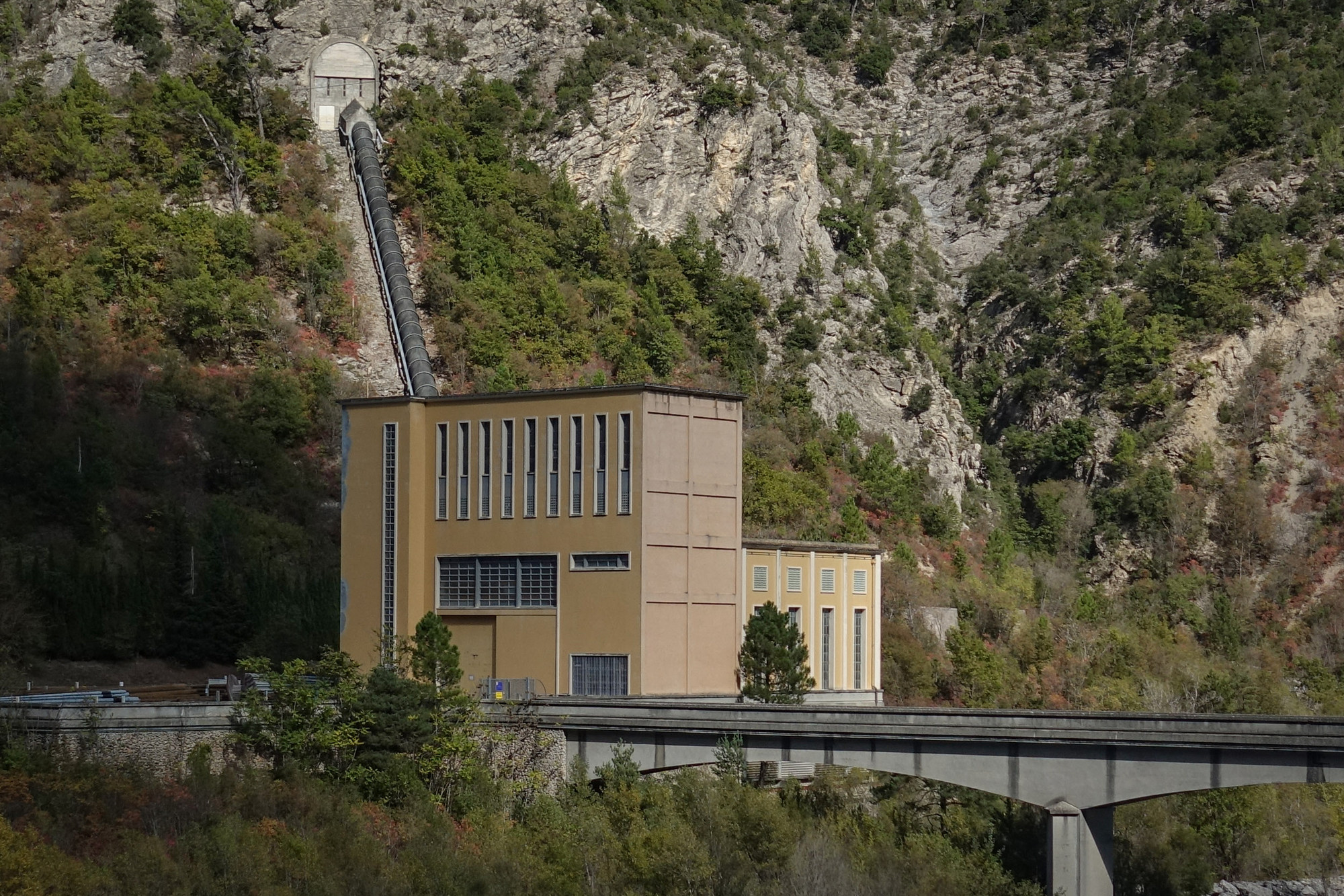 Where the road cuts between the rocks of les Gorges de la Mescla, where le Tinée river flows into le Var, there are lots of tunnels and flyovers and roads and rail going left right and centre. I’m always fascinated with this section. But not today. The road I wanted to take was closed. 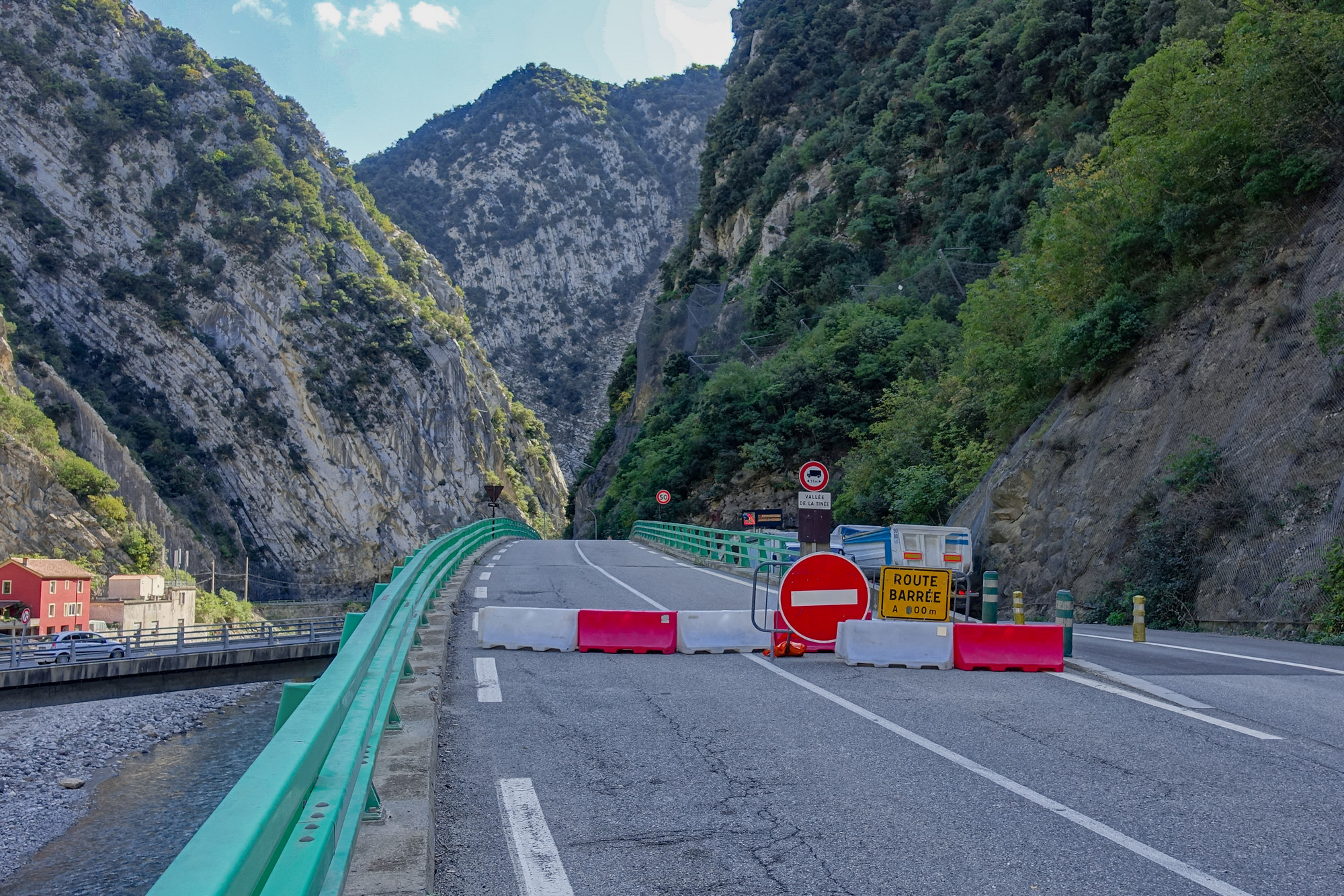 I was diverted into a tunnel.

I didn’t particularly like it but I had no choice. It was too late, once I had turned into it, other than to keep going. The tunnel had posts down the middle of the road to separate the contraflowing traffic (normally the tunnel is one way). Because of this, I was holding up all the traffic behind me, which I think was just one vehicle. It was so loud in there I couldn’t really tell.  But I couldn’t stop and I was going as fast as I could because it was slightly downhill, but I still had my shades on so I couldn’t see that well and there were frequent drain hole covers I had to miss. Needless to say it was a fairly stressful experience. Also at this stage I was worried that I was off route because my Garmin had wanted me to take a road that was closed. But when I came out of the tunnel the Garmin appeared to indicate that I was fairly close to the road I should be on. After the tunnel, I felt I was holding up traffic again because of the posts down the middle of the road so I just pulled over to the armco and let about 20 or 25 vehicles go by.

Now I’ve arrived at a junction where I’m hoping I’ve taken the right direction – it was signposted Nice so I think it’s right, as long as I can get over the river on a bridge somewhere I should be ok.

I have stopped right next to a halt, La Tinee, on the Nice-to-Digne Train des Pignes. It seems strange having a station here because there is absolutely nothing around here. Unless it was used to catch a bus up the Tinée valley. I don’t think it’s used anymore. It’s not mentioned on any current timetables for this line.

Standing here doing this report I’m in warm sunshine with very few clouds in the sky, so maybe I should have done one of those other tougher rides. Just as I’m about to finish this report I heard the bell ringing for the railway level crossing, so I quickly got my camera out and got a picture of the approaching train, which was one of the old types. 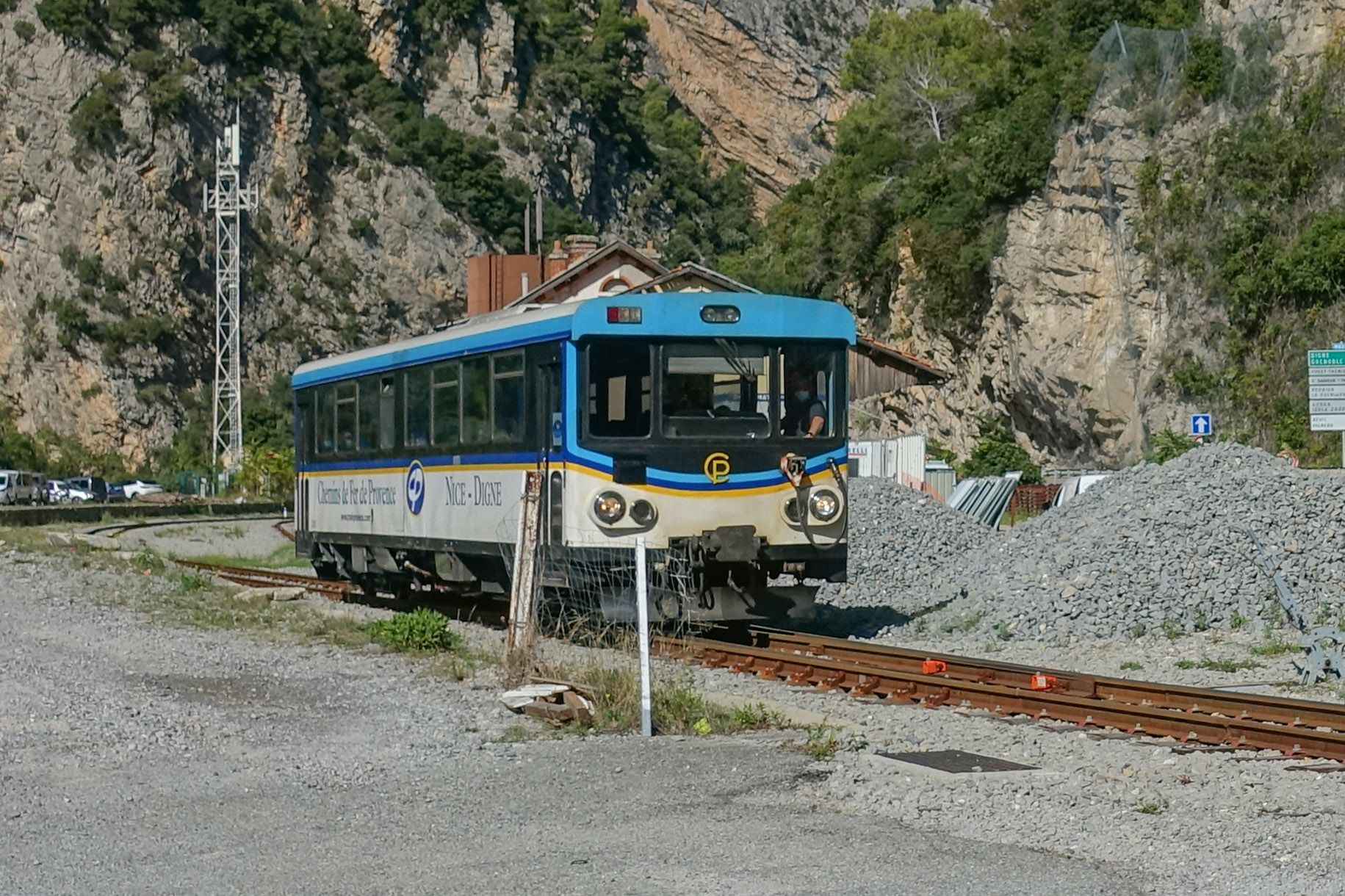 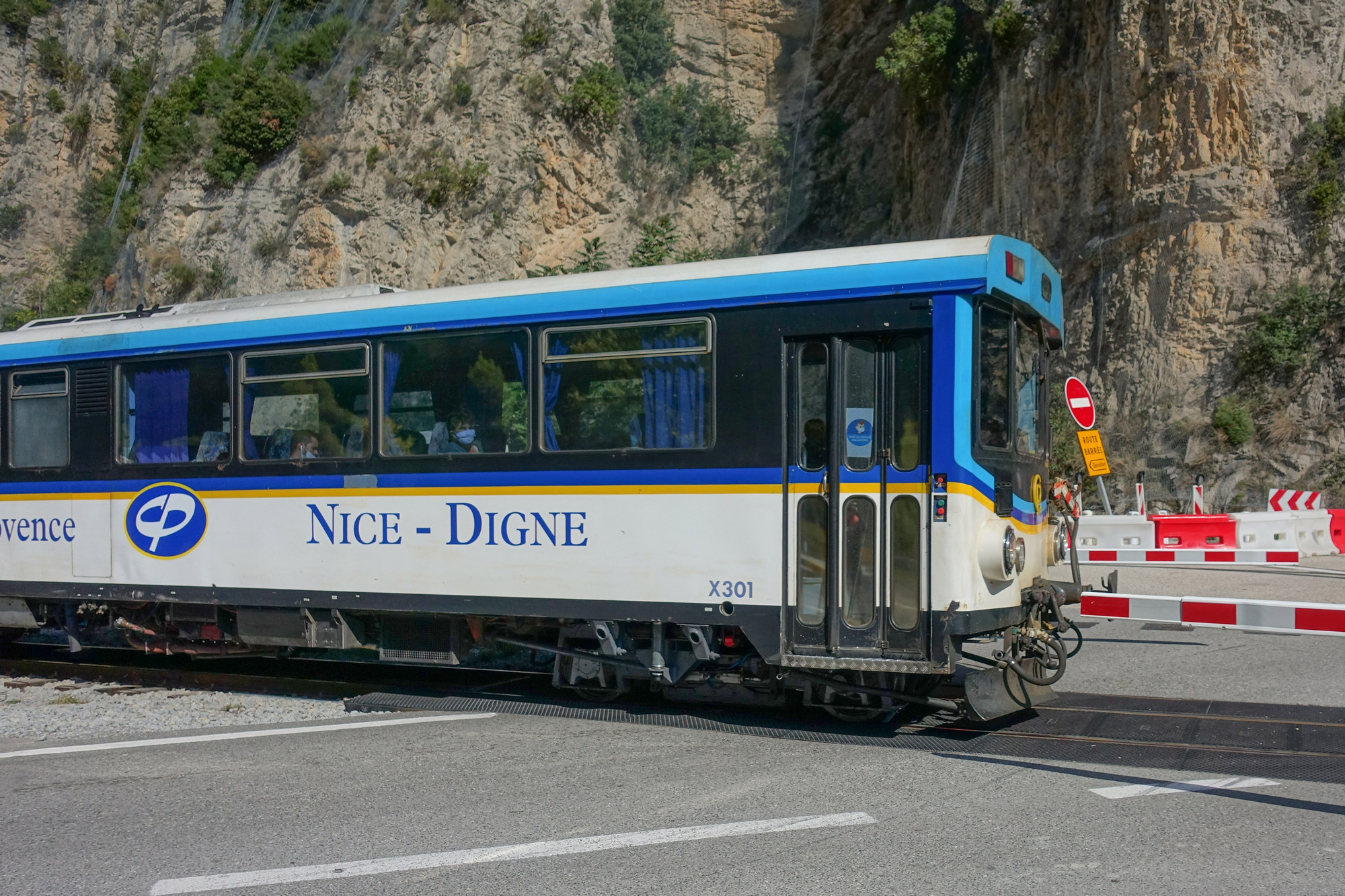 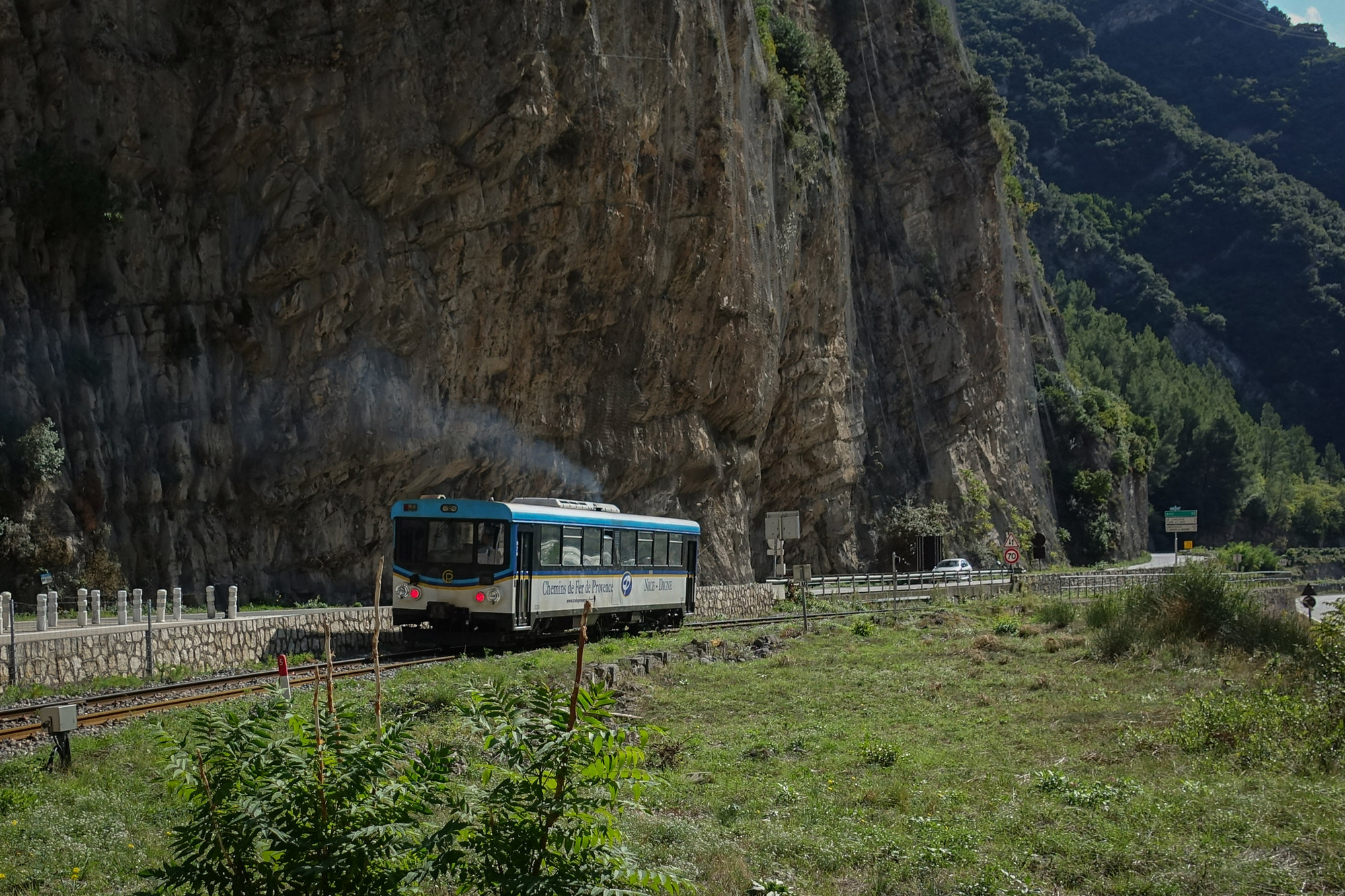 This report coming from Gilette, sitting on the same bench that I sat on two years ago during another ride where I remember it was later in the day. Since the last report, I subsequently realised that the road I was on was the correct one – it travelled in parallel to the bigger road below, so I don’t know why there was any traffic at all on the road I was on because it could have been on the better road below. 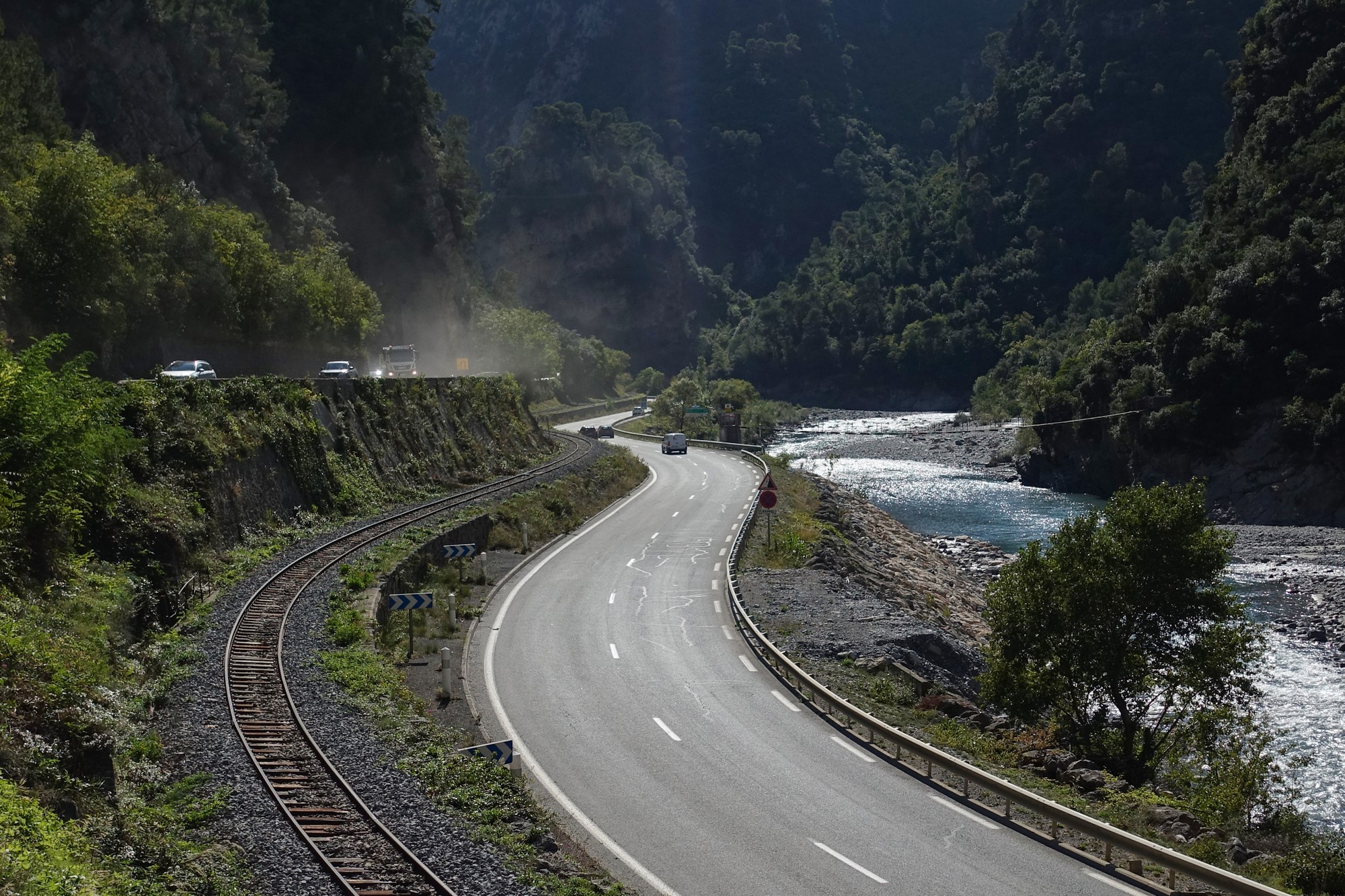 Anyway it wasn’t too bad but there were some heavy vehicles coming past and with a small ledge to my right, and the noise and the wind blowing didn’t make it all that enjoyable. Eventually I reached the bridge that I recognised from the day before yesterday in my motorhome. 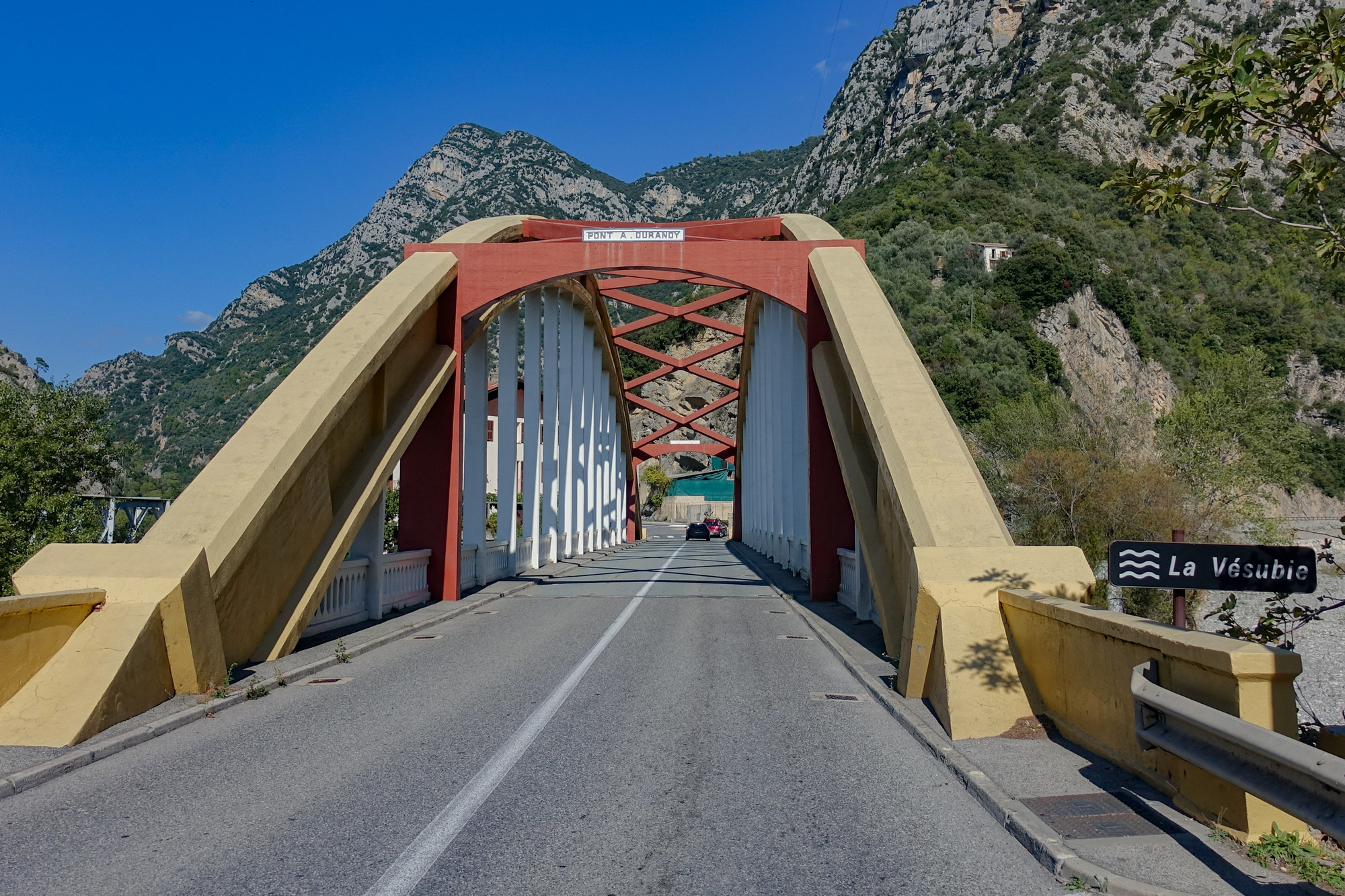 Once over the bridge I continued to follow the main road which then joined the other lower road just before le Pont Charles-Albert, where I could cross the river.

And boy was I glad to see that bridge because then I knew I’d be off the main roads. Once over that bridge the road started to climb. Again it was the same road or route that I’d done before in my motorhome. I decided to go up to Gilette in one go and did it in 3rd gear and sometimes 4th and 5th never lower. I was pleased with that. The Colnago is great to ride. The sun was on me nearly the whole time so it was quite a hot climb, and I shoved my arm warmers down to my wrists. The road had hardly any traffic. I hadn’t had an energy gel – only the banana I’d had at the last report. 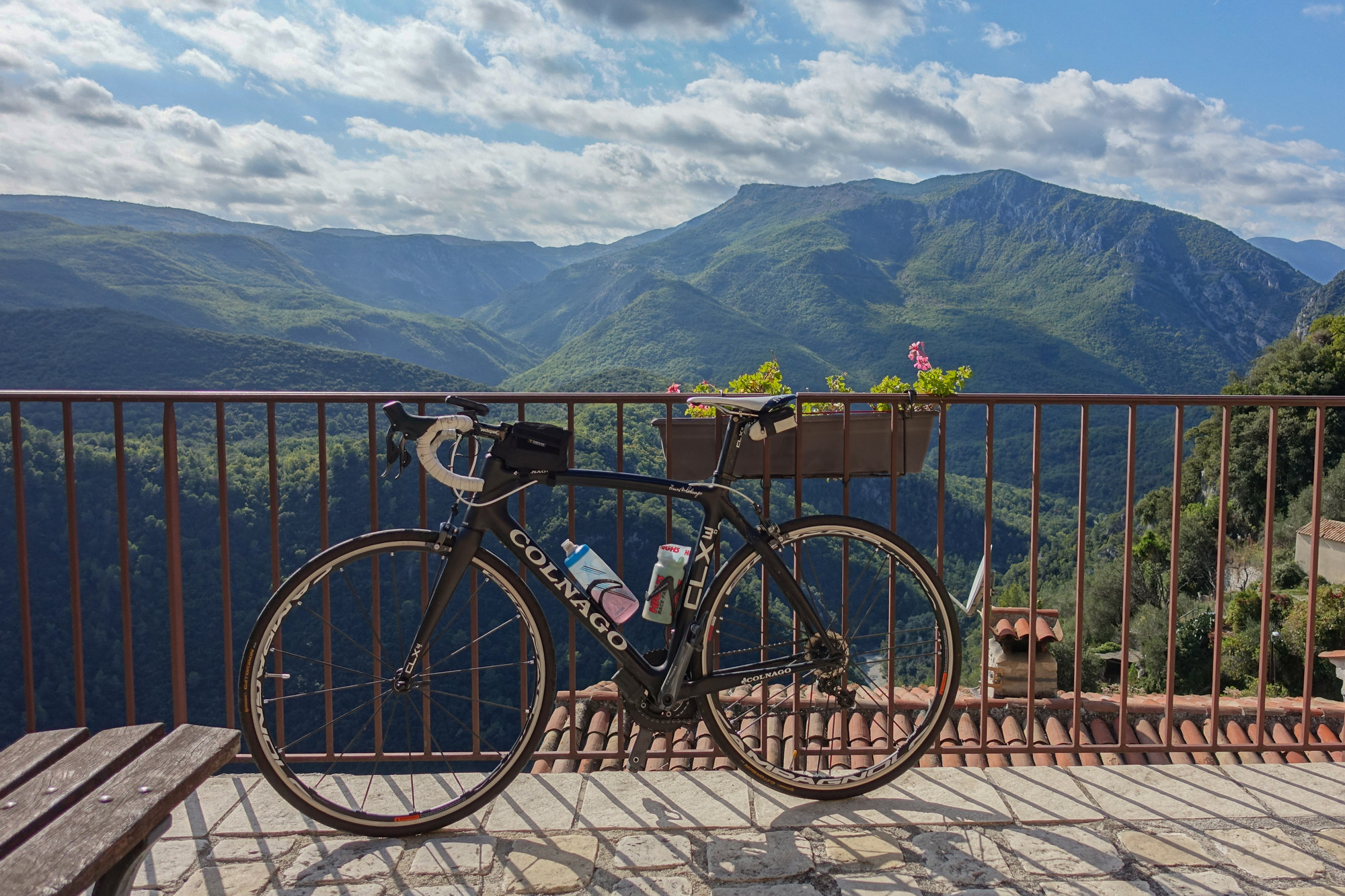 Anyway, here at Gilette I’m going to have my marmalade sandwich and get ready for the next section of climbing before the downhill to the end. 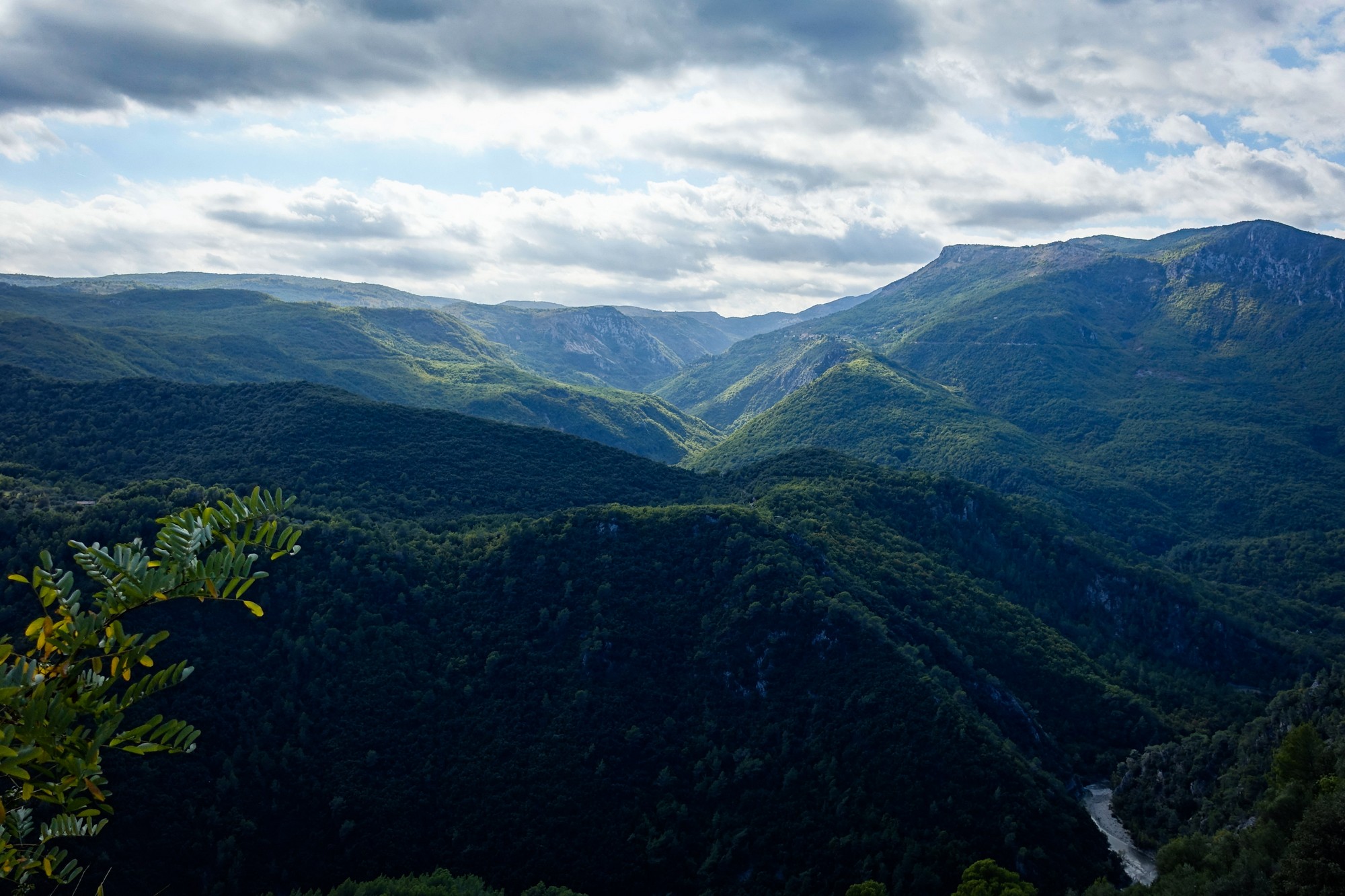 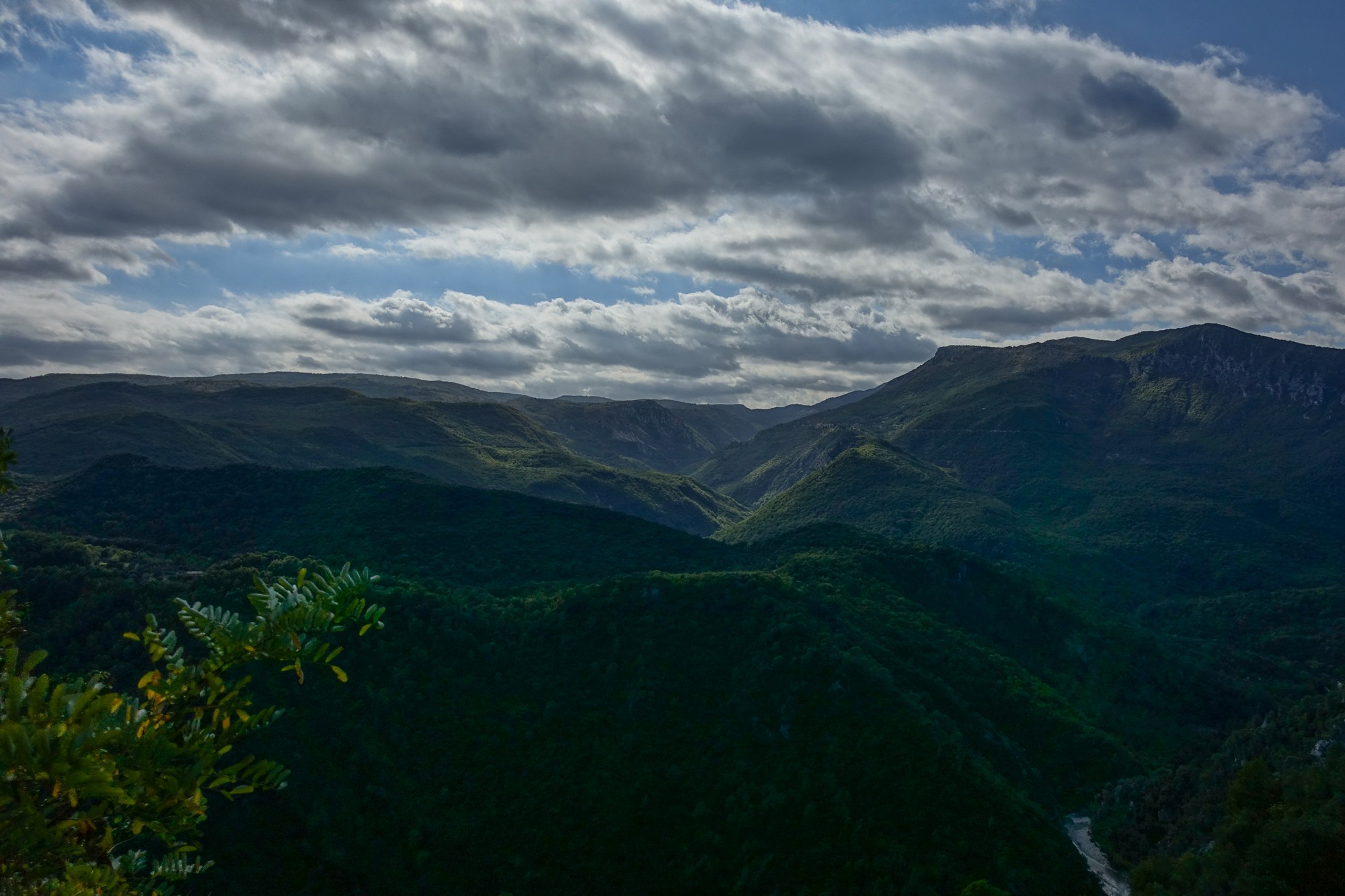 Last report coming from back at base. I completely underestimated how much more climbing there was left to do once I left Gilette. And it never seemed to stop. First I saw a village up on top of a hill and hoped the road didn’t go up there, but of course it did. 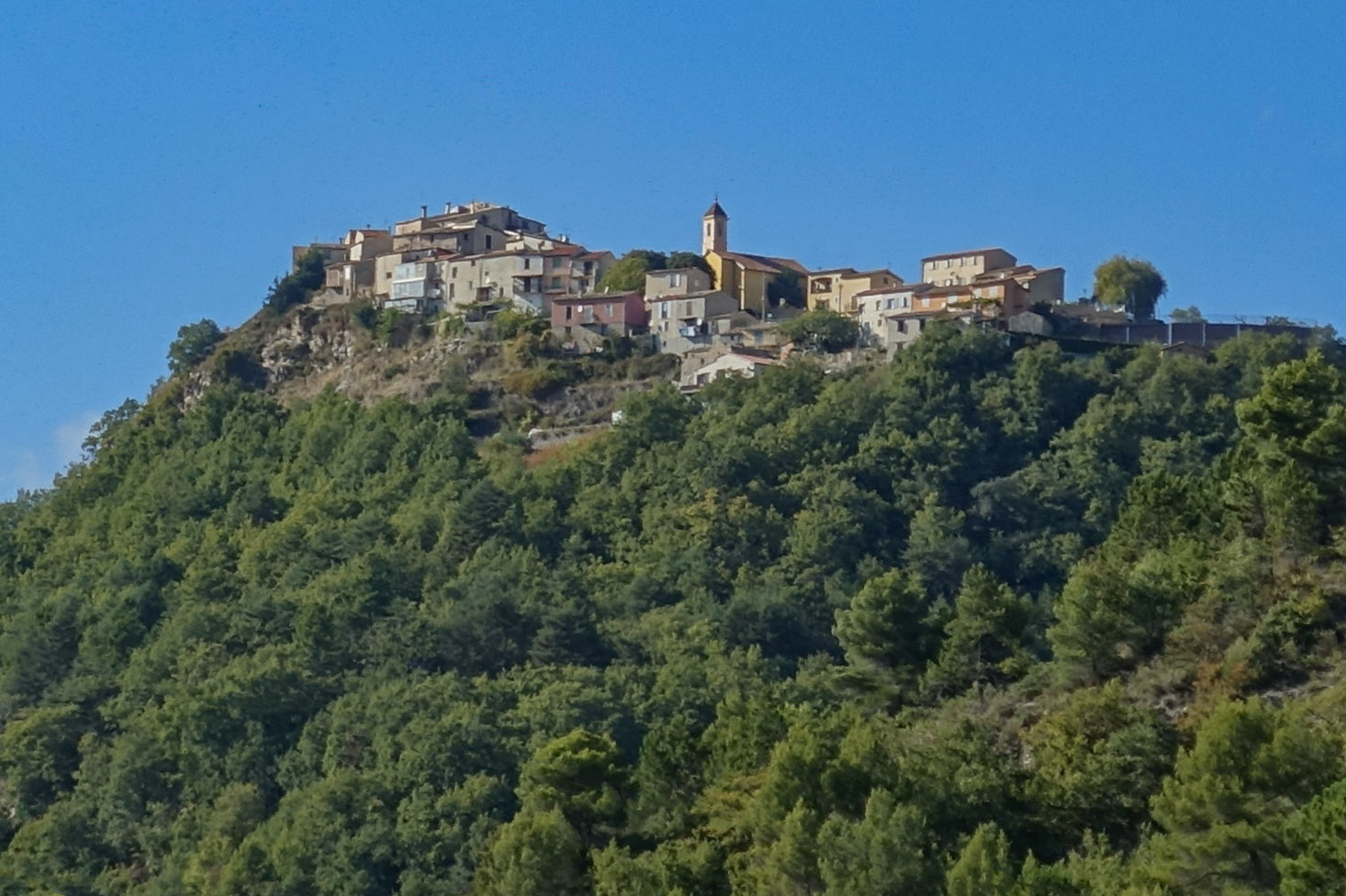 The road leveled out there I think, but I had a figure of 35 miles on my mind for the end of the climbing, so I expected more to come. Then the road went over the top of something, between rocks and I thought it would be downhill from there. 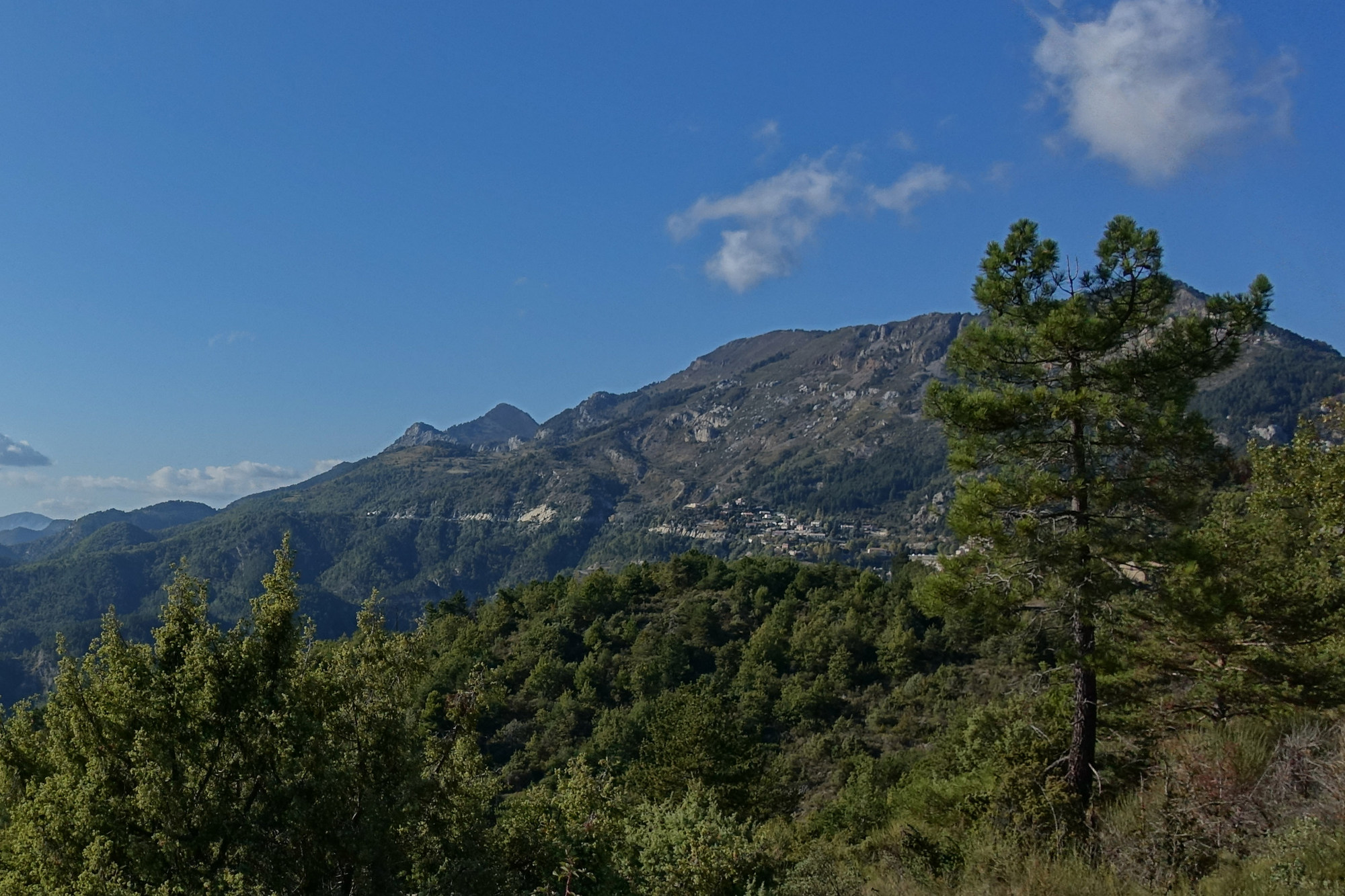 But no, the road climbed to Toudon and I thought maybe that’s the end of climbing. But no, again I saw the road climbing up the hillside ahead. Then I reached Col de Vé Gautier…

… and I thought this must be the end of climbing, but no, the road kept climbing. 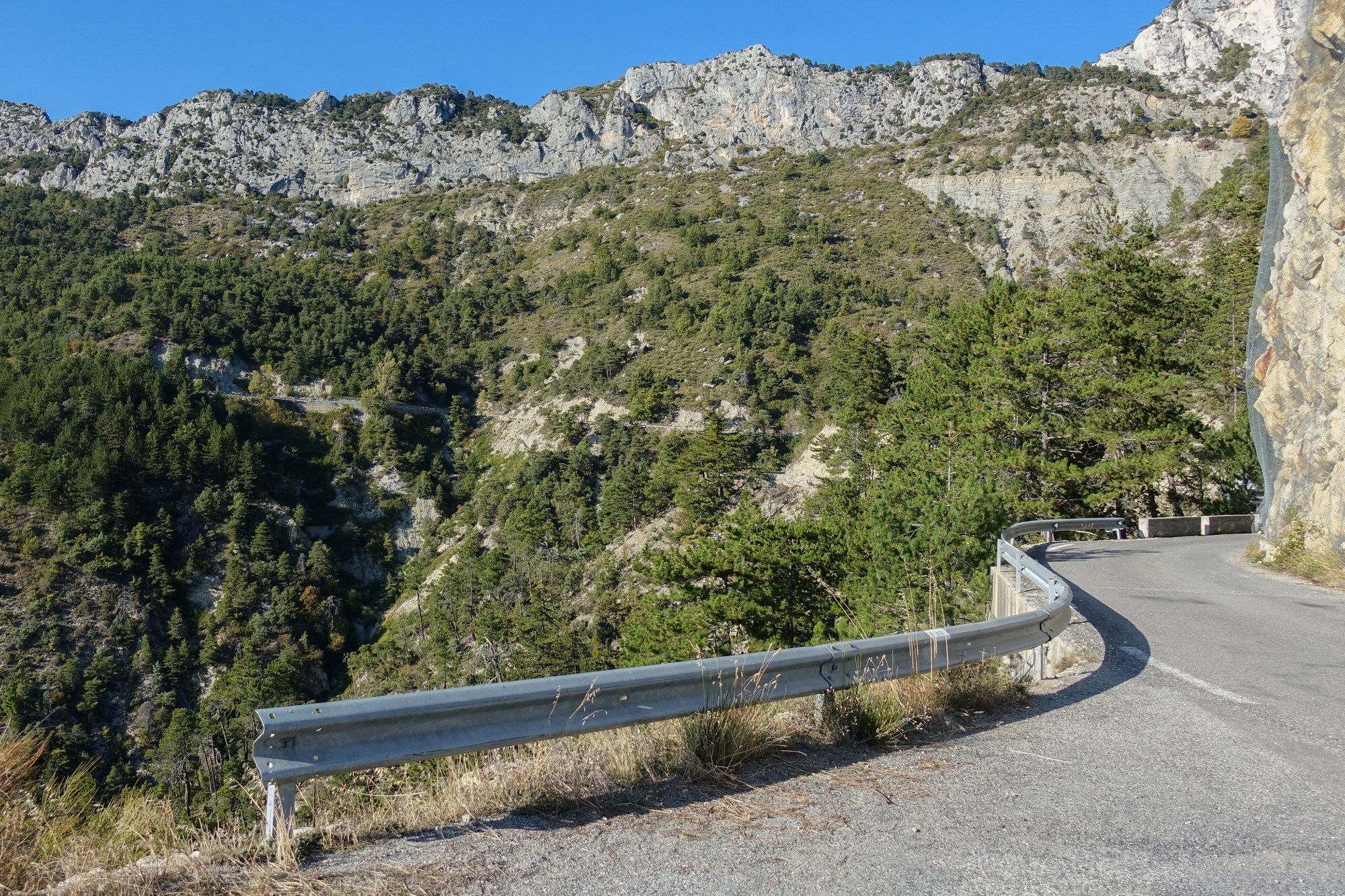 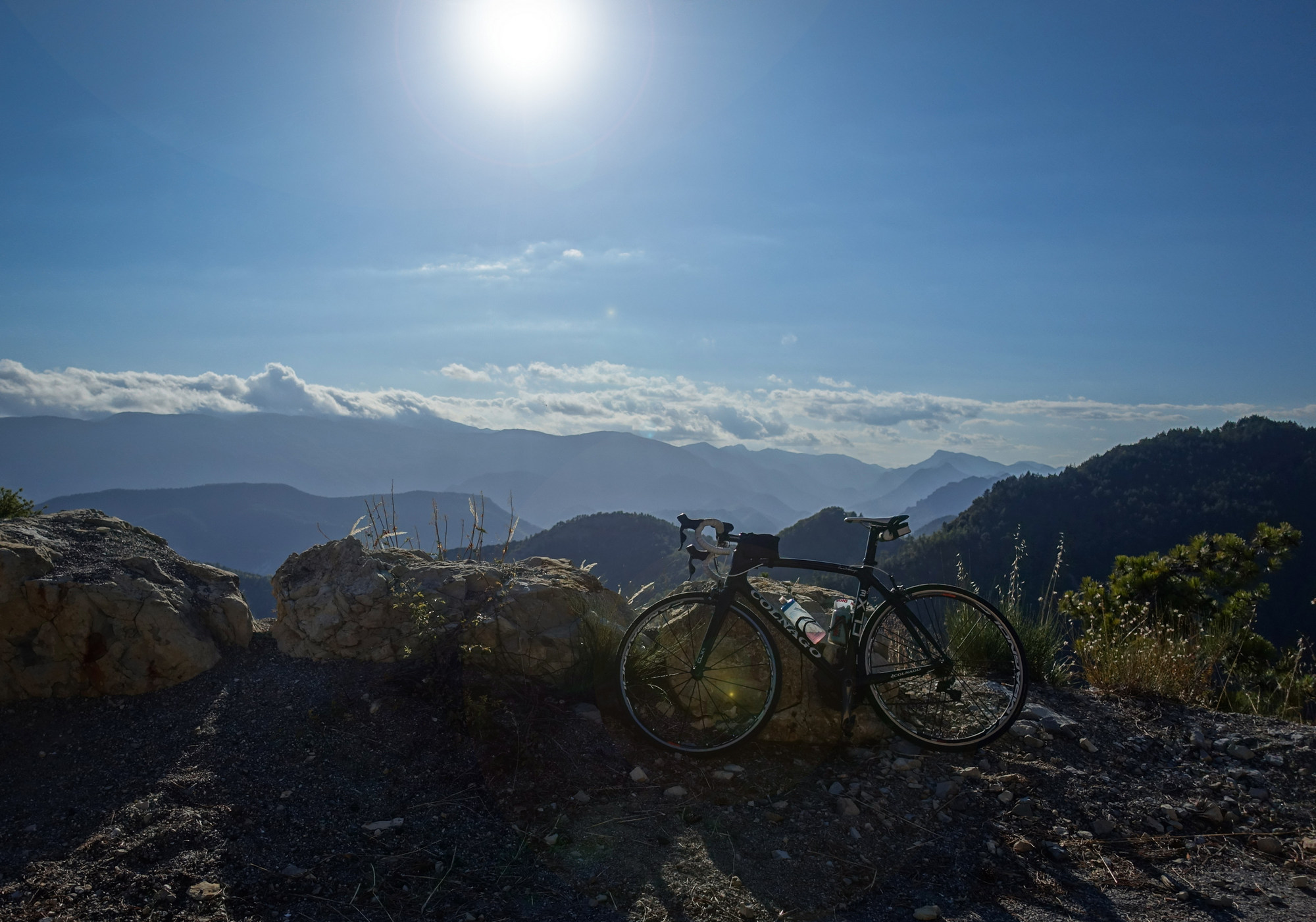 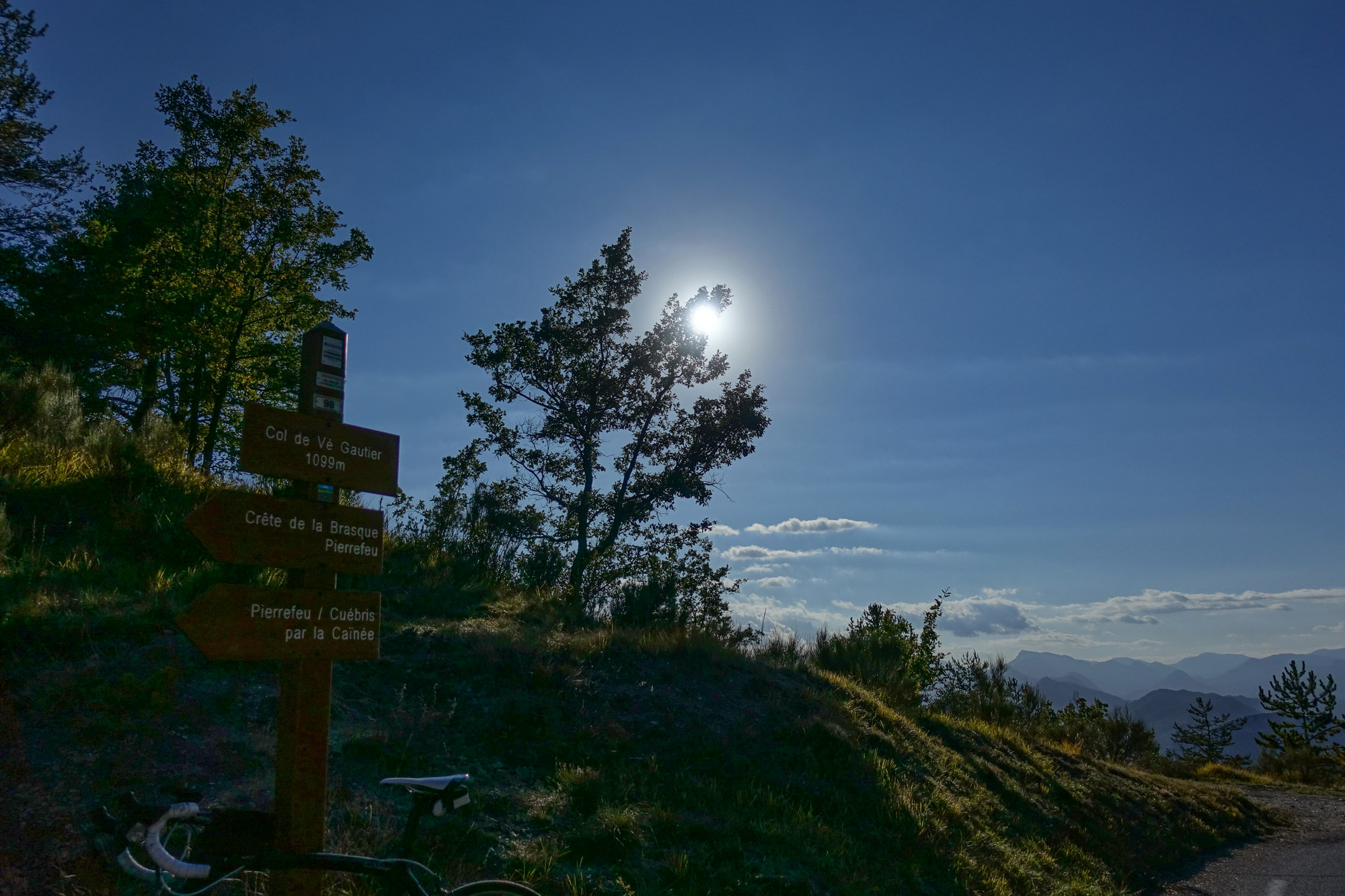 I had my remaining gel. Then, once through Ascros, the road at least leveled and descended gently. 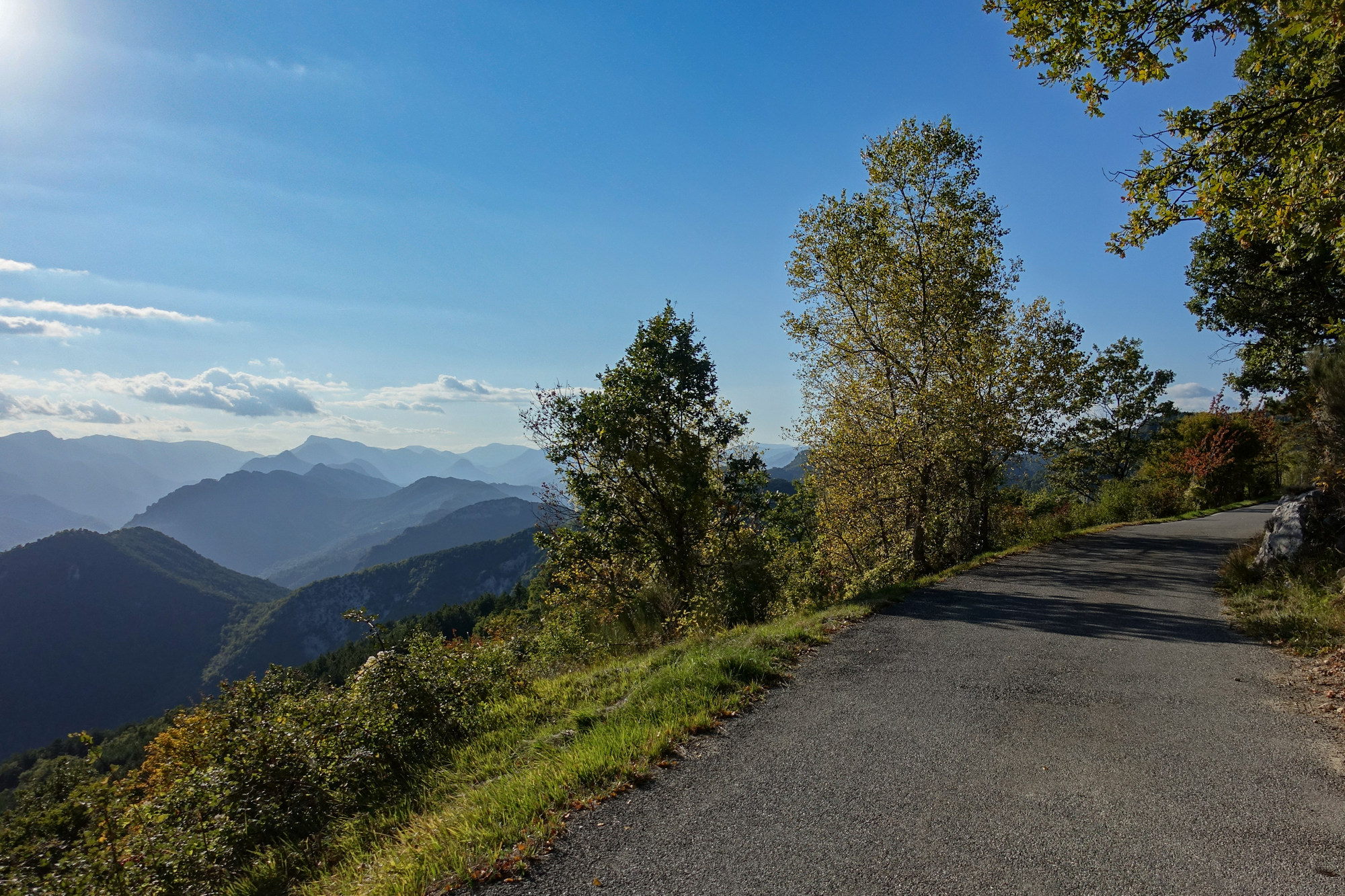 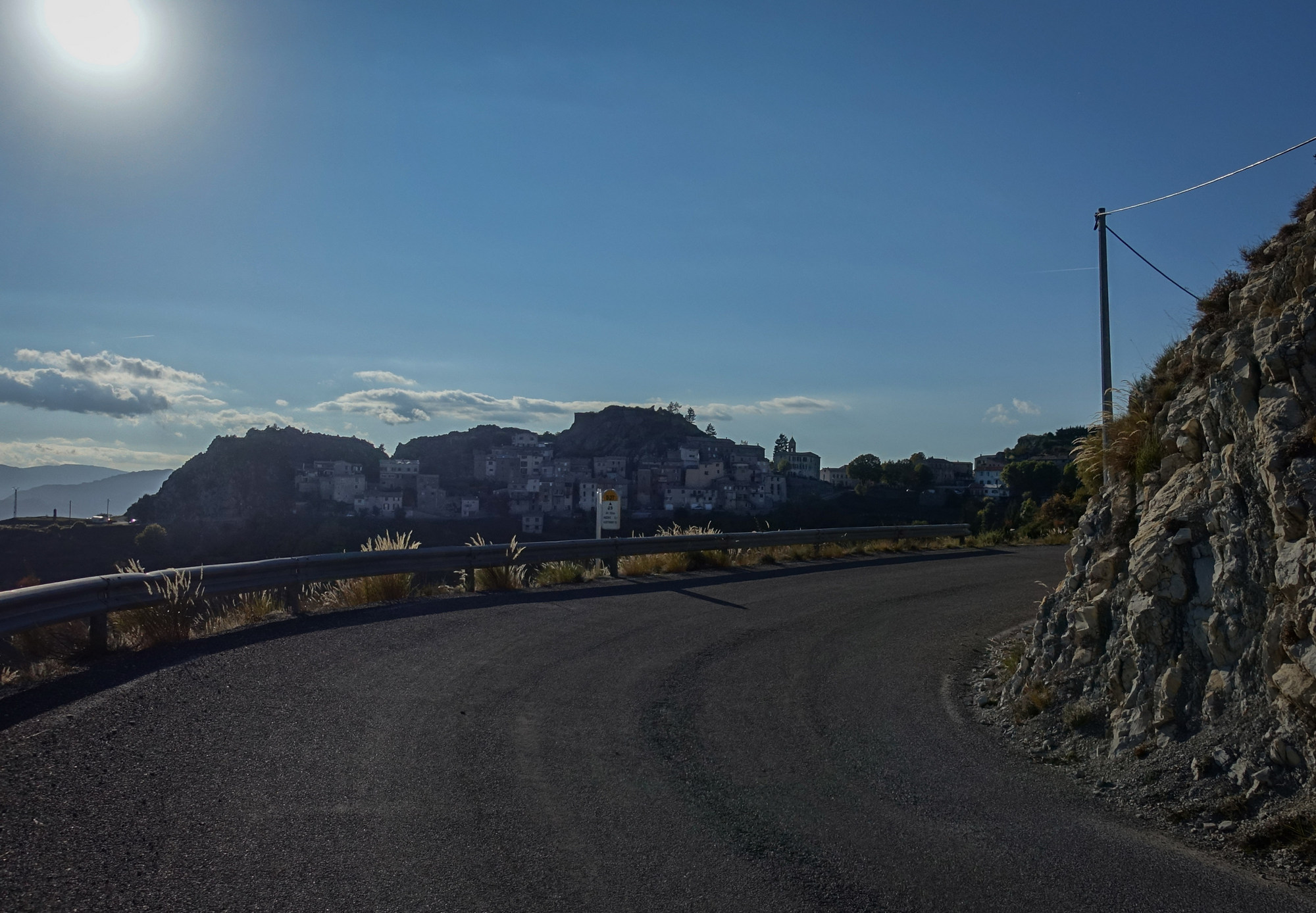 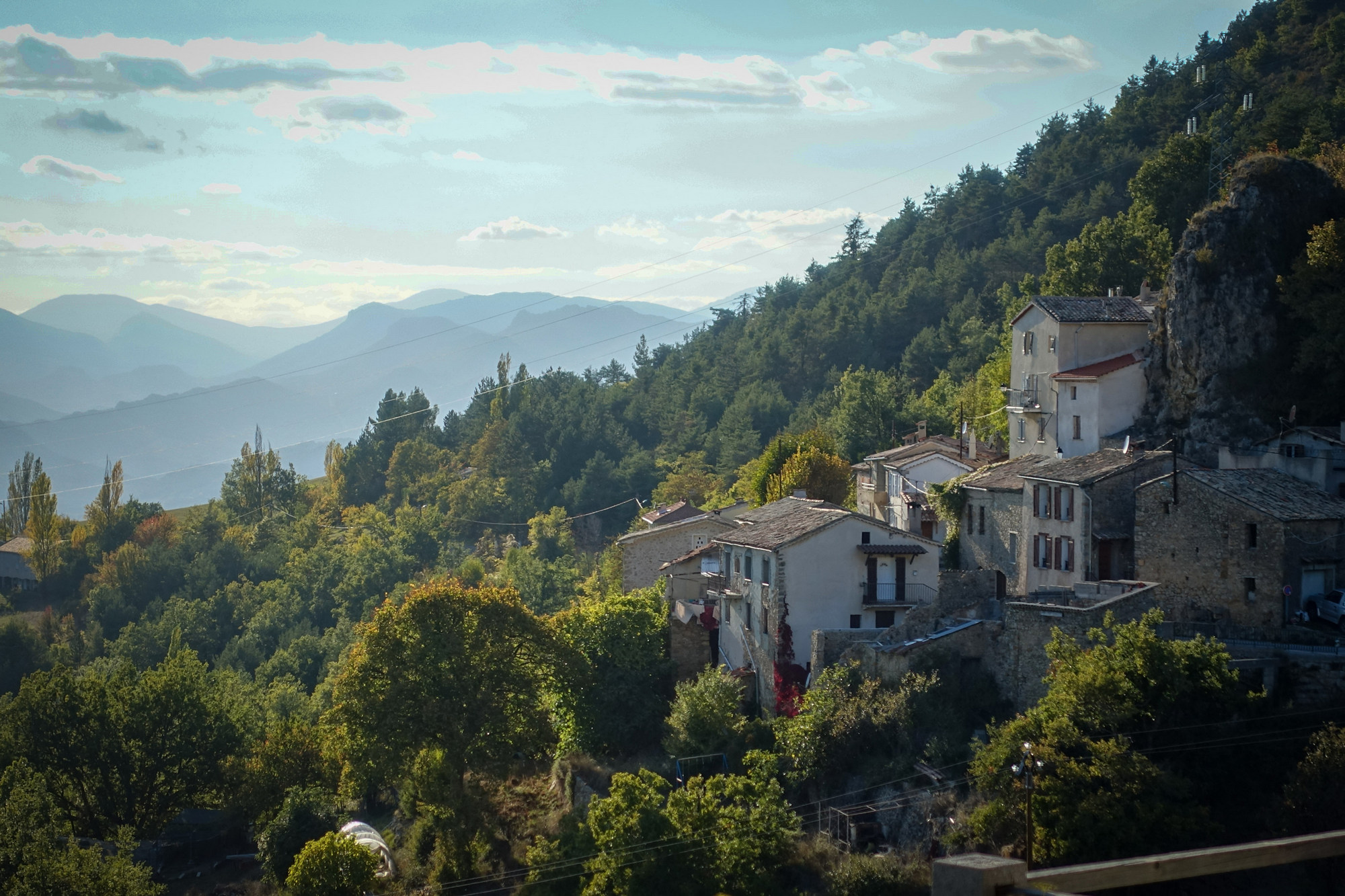 I knew once I reached the Col de Saint-Raphaël that it would definitely be downhill from there. I didn’t bother stopping at the col – just went straight into the fast descent. 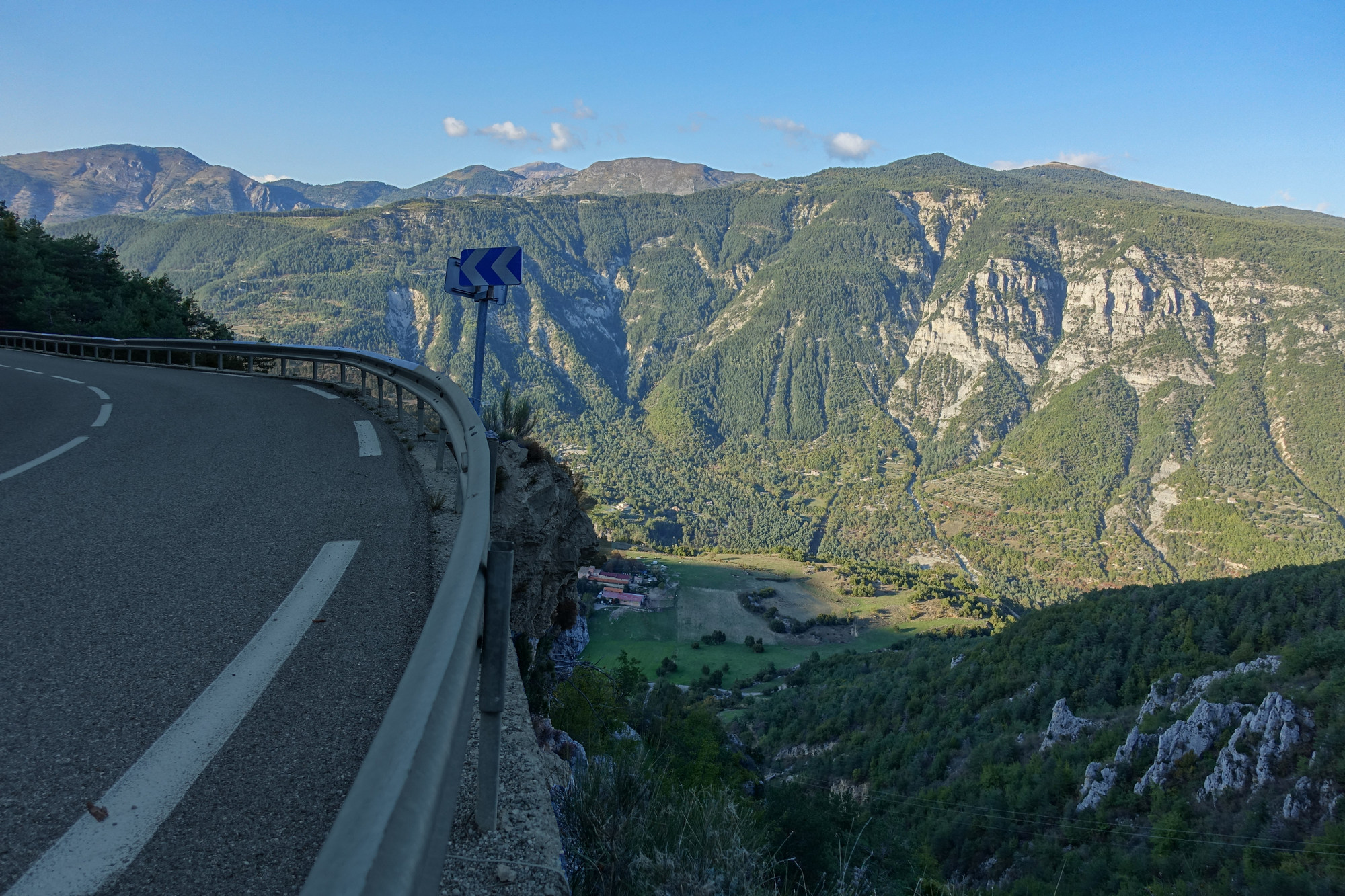 I got back really quite cold. My hands are freezing.